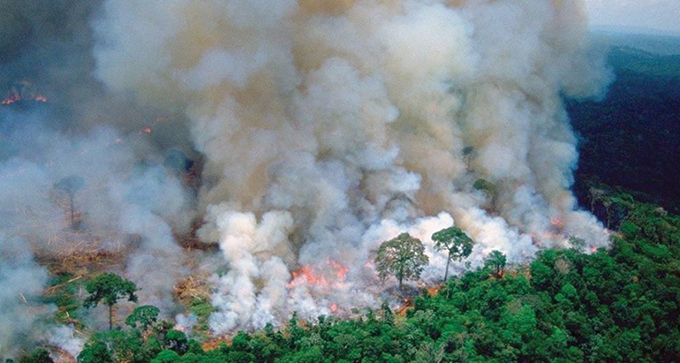 Interesting facts and myths about the Amazon
By Theo Stehle

The massive fires burning in the Amazon rainforest have been prominent in the news recently, with satellite images vividly showing the numbers and extent of these wildfires that have been difficult to contain because of drought and terrain inaccessibility.

The role of the rainforests in the earth’s climate features high on the agenda of many politicians and green activists. The slogan ‘Save the Amazon, save the earth’s green lungs’ has became a pseudo-scientific hit repeated over and over by ill-informed activists and politicians jumping on the climate change bandwagon.

I paged through a wildlife magazine issued by a South African conservation institution and my eyes caught the caption under a picture of our local rainforests: ‘Our green lungs’.

There is one problem with this slogan, the Amazon rainforest, or any tropical or subtropical rainforest, are not the green lungs of the earth!

Comparing the rainforest with lungs immediately conjures up the association with the breathing in of oxygen, essential for life. But at best, the Amazon is oxygen-neutral. Why? Because, although oxygen is emitted into the environment through the process of photosynthesis, the vegetation itself again absorbs oxygen, and besides, oxygen, and lots of it, is used for the decomposition of dead organic matter, because the tropical heat promotes and speeds up the decaying process.

So where does the oxygen come from then?

However, even the boreal forests play a relatively insignificant role here. In fact, the world’s forests are not the main terrestrial oxygen producers, but grasslands! Before the prairies in the USA were converted to agriculture, they were the greatest source of oxygen on land, but now the Nagqu natural grasslands of Tibet hold this status, covering a staggering 40 million km². The low temperatures in this area prevent the fast decay of organic matter, resulting in a substantial net oxygen emission into the atmosphere.

Oxygen from the ocean
Terrestrial vegetation of all kinds is responsible for about only half of the earth’s oxygen, the rest comes from the ocean, through the photosynthesis of phytoplankton. So if one still wants to talk in terms of green lungs, it is the forests of Russia, the steppes of Asia and the oceans which contribute the bulk of oxygen, not the Amazon!

All this doesn’t mean that the rainforests are not important. They are highly important for other functions, like ecosystem services, most importantly carbon sinks, but also for water and soil conservation and conservation of biological diversity. Conversion to agriculture and other land uses is degrading the natural forest resources, with devastating impacts on water resources, irreversible loss of plant and animal species, depriving mankind of potential uses like medicinal, and loss not only of carbon stored in woody plants above the soil surface, but also in the topsoil.

Yet sadly very few people, even scientists, including in applied sciences like agriculture and forestry, place much emphasis on the conservation of topsoil, not realising that the topsoil with all its ecological processes of decomposition and formation of humus, form an important part of the earth’s biosphere.

The volume of micro-organisms in the topsoil is staggering!

Carbon in the topsoil is at least as important regarding carbon sinks as is the above ground biomass of the world’s forests. Soil for the forestry industry is the goose that lays the golden egg. Caring for the soil is ensuring long term sustainability of production of the forest resource. This is particularly important in harvesting practices. Short cuts to increase timber production and financial yield at the expense of soil fertility will revenge itself over the longer term. The wanton destruction of the Amazon will experience exactly that!