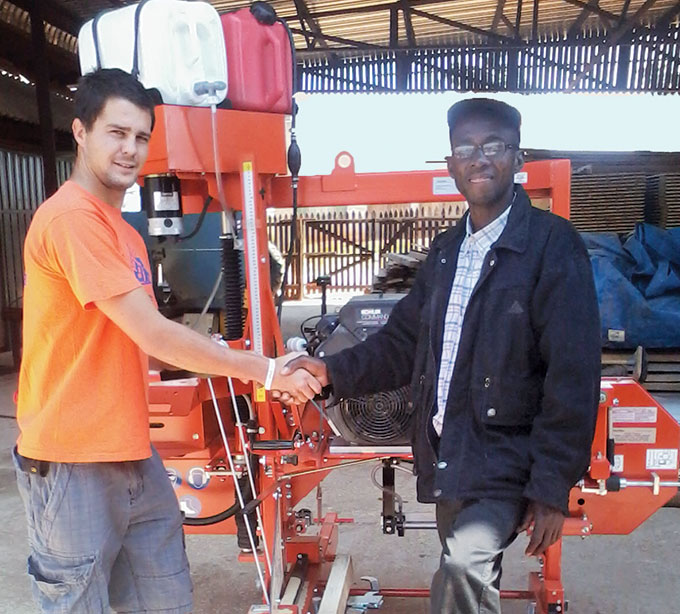 Dean Goldstone of Cutting Edge, the Wood-Mizer dealer based in Zimbabwe, hands over a LT15 to Zimbabwean entrepreneur Richard Saziya.

When Richard Saziya started his sawmilling business in 2001, he never imagined where this road would lead him.

His introduction to Wood-Mizer happened when his employer, Cembee Furniture, asked him to find sawmilling equipment that could saw timber for the factory that wasted less timber than circular swing-blade type sawmills.

He found a used Wood-Mizer sawmill in Zimbabwe’s Eastern Highlands which proved to be reliable and produced accurately sawn timber for the factory with minimal wastage.

Richard’s success with the Cembee sawmill was enough motivation to start dreaming about starting his own business.

PanPri and Tsanga Timbers
Richard bought a used Wood-Mizer LT40 portable petrol sawmill that could move around to where the trees were being harvested. This gave his start-up operation a competitive advantage and he was able to found PanPri Timbers in 2001.

He subsequently added three more Wood-Mizer LT15 petrol sawmills which enabled him to produce more sawn timber and grow the business. A contract with Zimbabwe’s Forest Commission also allowed PanPri to cut trees that were not native to the protected areas.

With the growth in timber sales, a new timber depot in Harare and more timber supply contracts in Bulawayo, Gweru and Maronberg, Richard Sayiza was keen to grow his business even further.

Utilising the good quality B-grade timber left over from the A-grade logs at PanPri was the answer for more growth. So in 2010 he started Tsanga Timbers in Nyanga to utilise the B-grade offcuts and logs to produce pallets, skirting, ceiling boards and doors for the local building and construction market.

Tsanga Timbers recently opened a new depot in Harare to provide a better service to their growing customer base. The company has also built up a network of qualified carpenters in Mutare, Masvingo, Bulawayo and Harare to assist customers to fit their timber products.

Growing trees and using timber wisely
Richard gives his business partner and co-director of Tsanga Timber, John Saunders, much of the credit for his success.

“John really opened my eyes to the potential money that value-added timber has,” Richard says. “Logs only provide a small part of the value. Only once you cut the timber and produce products from it, do you unlock the real value of timber,” he continues.

To improve the sustainability of their business, Richard and John have started engaging with timber growers.

“Our own timber costs us less, it bypasses the difficulties of Zimbabwe’s land battles and ensures a stable timber supply,” Richard says.

The PanPri and Tsanga Timber teams supply landowners with seedlings that are grown on private properties. Once the trees are mature, the company gets first option to buy the logs. 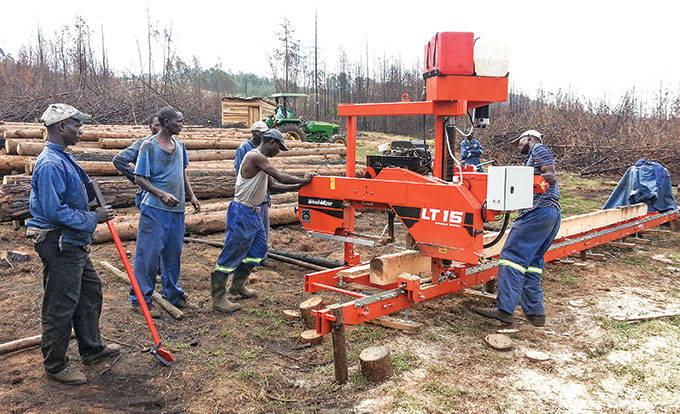 One of Richard’s teams cutting infield.

Sawmilling with Wood-Mizer
When Richard first started his business, he had one team of three people that moved around to find trees to cut. With the addition of the right equipment, innovation and a lot of hard work, PanPri and Tsanga Timbers now employ a total of around 80 people.

Richard believes that there is one key factor that unlocked so many business opportunities for him, and that is having the capability to saw logs into planks in-field where they are harvested.

“Don’t try and transport logs but rather work in-field and cut blocks that are easier and cheaper to transport,” Richard says.

Richard’s business has flourished despite many challenges; Zimbabwe’s land battles, the difficulty of accessing reasonably priced timber grown by large companies, the influx of Chinese sawmillers and the lack of foreign currency are just some of them.

“We face many challenges and my wish is that we as Zimbabweans will build a future that everyone can be proud of,” he says.

“We’re also very proud of our relationship with the Zimbabwean National Parks with a recent purchase of more chainsaws allowing us to clear out invasive species to make way for timber that will be planted,” Richard concludes.