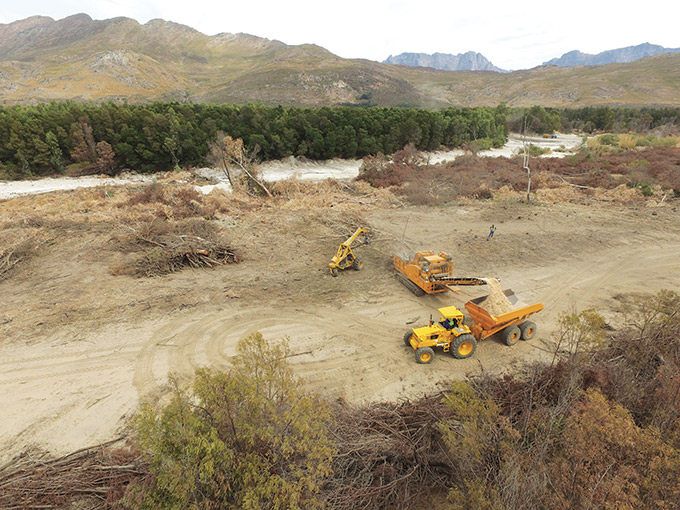 African Biomass Company (ABC) founder Willem van der Merwe is passionate about the environment, and has built a business around turning wood waste into mulch (which is fed back into the soil), or chips for energy.

Willem started ABC in Worcester, Western Cape, in 2004, offering a one-stop service to customers – mainly fruit and nut farmers – to turn their unwanted wood and brush waste into a usable mulch that is easy to handle. It was initially a relatively small-scale operation, using a hand-fed Bandit chipper.

However Willem soon realised that in order to make the operation economically viable he needed to increase productivity significantly. So he started using bigger, horizontal grinders, fed by Bell loggers to boost production to the required levels.

With farmers in South Africa increasingly coming to understand the value of using their wood waste as a mulch to feed the soil – rather than just burning it – the demand for ABC’s services took off. They have put another team into the field every year since then, expanding their operations to the Eastern Cape and Limpopo Province. 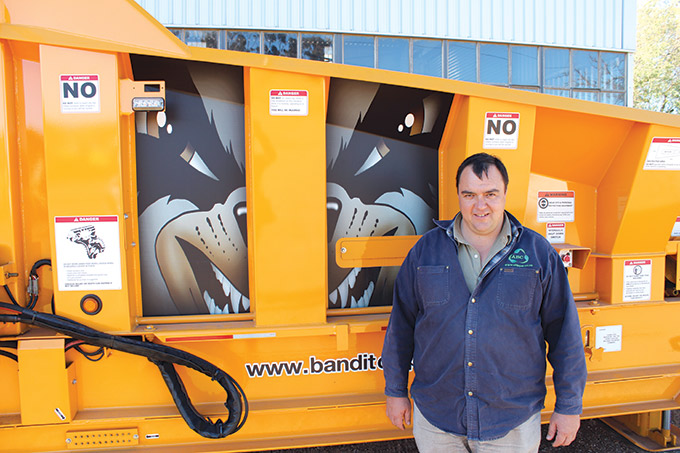 Willem van der Merwe, founder of African Biomass Company, is one of 15 finalists in the Entrepreneur of the Year Competition, 2017.

With the valuable experience they have gained working for different customers in different conditions, ABC is able to assemble the most appropriate mix of equipment for the job. The scope of work has also expanded to include clearing of alien plant-infested bush and tree felling, which is then chipped to produce valuable mulch or feedstock for energy.

ABC teams typically use two Bells to feed a horizontal chipper, hauling the chips to a roadside depot with a tractor and trailer. Clearing/felling of large trees is done using a heavy duty, excavator-mounted shear.

With workshops in Worcester and Addo in the Eastern Cape, and access to a full range of Bandit chippers and grinders (ABC is now a dealer for Bandit equipment in southern Africa), ABC is geared up to handle any job, big or small. A specially designed (and patented) chip spreader is capable of placing the mulch back in the field, exactly where the customer wants it. 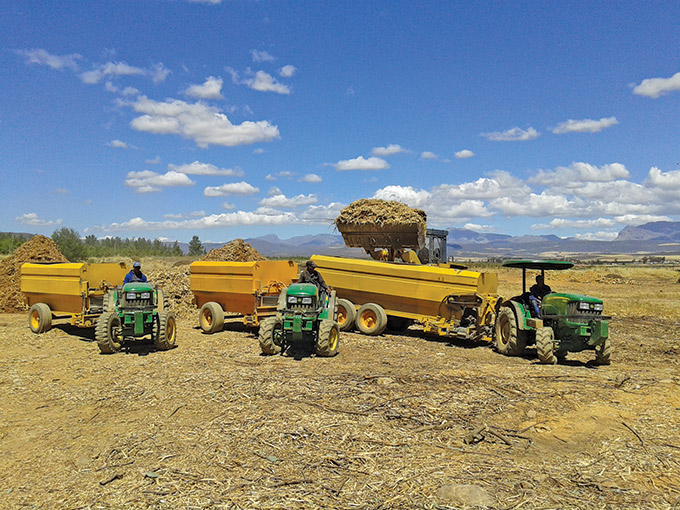 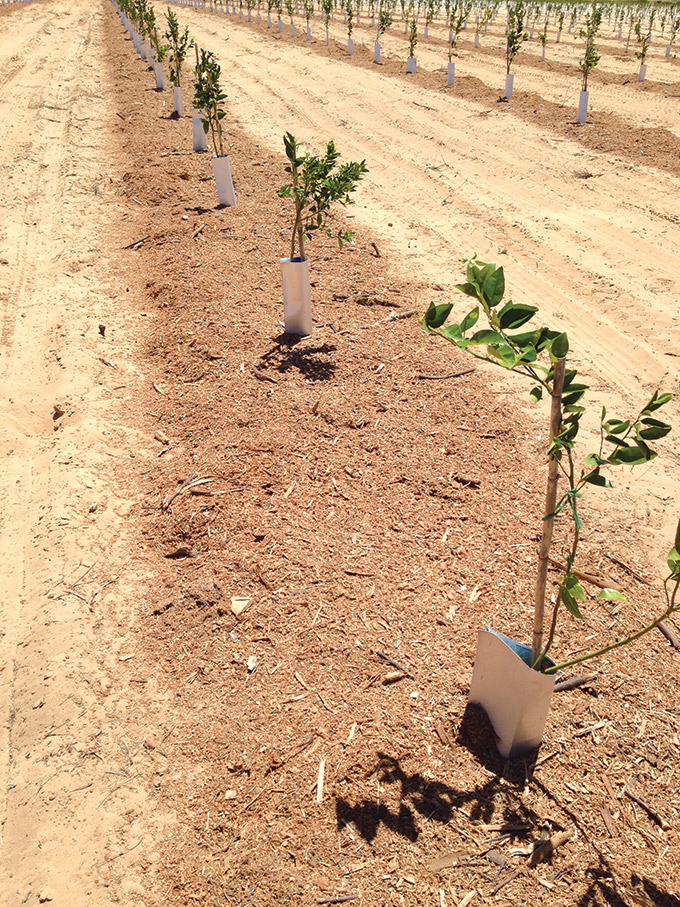 Mulch was spread along planting lines in the orchard.

“We take care of the clearing and chipping of the biomass, the customer owns the chips and can do what they want with it,” explained Willem.

Current operations are producing around 200 000 tons of chips a year. Willem says 90% of it is used for mulch, and 10% as an energy feedstock.

“We can produce wood chips suitable for turning into energy at a comparable cost to coal on a R/kilojoule basis,” said Willem.

However the biomass route is infinitely preferable to the coal option, because it is a renewable resource – and is carbon neutral.

Initially most of ABC’s work involved clearing and chipping unwanted trees and/or bush for fruit and nut farmers. They are now also a preferred supplier with government agencies for clearing invasive alien trees (mainly wattle, pine, gum and Port Jackson) along the Breede and Berg River valleys. This job requires a versatile fleet of equipment that can handle everything from brush to huge trees. 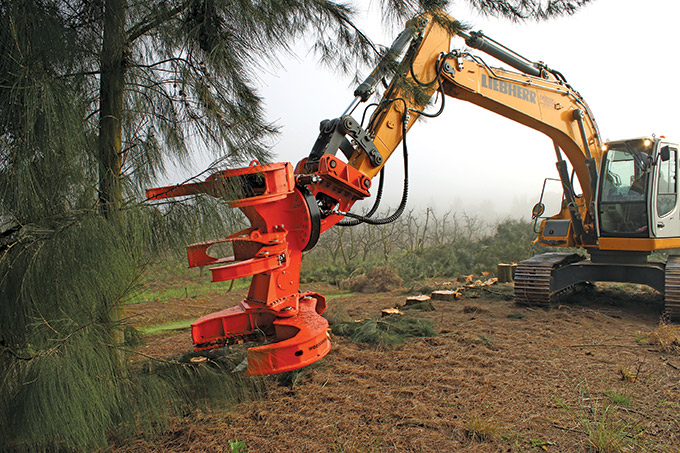 The Woodcracker felling trees to be chipped for mulch.

“For every three hectares of alien bush cleared, you add enough additional water to the catchment to irrigate one hectare of croplands,” explained Willem.

ABC is now targeting work in the forestry industry. Willem believes that the burning of post-harvest residue, which is widely practiced in the industry, is the worst thing you can do for the soil. He believes that the cost of chipping the waste is more than justified by the benefits to the soil, the reduced fire risk, the improved compartment access – and to the environment.

His company will soon be engaged in clearing burnt timber in Knysna, following the massive fires that swept through the area in June.

“We unlock the potential of soils through nature friendly practices. We have extreme passion for what we do. To me, every ton of biomass that is not burnt is a victory for the soil,” he said.

ABC has fully equipped workshops at Worcester and Addo in the Eastern Cape, with 95 employees in W. Cape and 25 in E. Cape.

The company offers the full range of Bandit equipment for sale or hire, as well as comprehensive technical support and spares backup.

Bandit equipment is manufactured in the United States, and includes a wide selection of chippers, stump-grinders, forestry mowers etc.