Is Big Brother watching over your plantation?

Out-of-control forest fires are terrifying things – especially when weather conditions are hot, windy and dry, and when vegetation fuel loads are high. These fires are almost impossible to stop as they jump roads and firebreaks, destroy millions of rands worth of plantations, houses and equipment, do massive damage to the environment – and kill people.

All the experts agree that the vast majority of veld and forest fires are caused by humans. Therefore the most effective fire prevention strategies involve persuading people who live and work in and around plantations to reduce or eliminate their risky behaviour– which is easier said than done.

But even so, accidents happen, lightning has to strike somewhere.

Fires will inevitable burn. On their own, individual landowners, forest managers and their staff do not have the capacity to stop big fires, and this is where the fire protection associations come in. They are experts, they mobilise resources and spend all year preparing for fire season. They can watch every corner of your plantation, and at the first sign of smoke they will react.

Most intensive plantation forest growing areas in South Africa are covered by fire protection associations. Many of them set up high-tech, 24/7 camera surveillance of forests, and can call on fixed-wing spotter planes to assist on orange and red days, with water bombers and possibly a helicopter standing by for instant reaction to fire outbreaks.

It is required by law that all municipalities and land under government control must join an FPA if one is operational in an area, but private landowners are not compelled by law to belong.

However in terms of the National Veld and Forest Fire Act No. 101 of 1998, every landowner/occupier/manager is required to maintain fire breaks and be prepared to stop fires at all times, and will be held responsible for fires that start on their land and spread across their boundaries to neighbours’ land.

FPA’s have graded membership fees ranging from around R40 per hectare for a total service which would include 24-hour electronic surveillance and 1st call on aircraft support in the event of a fire, to around R5 per ha for second call aircraft assistance. Membership of an FPA is also a requirement of fire insurance companies prior to extending cover to a landowner.

The KwaZulu-Natal Fire Protection Association is an umbrella organisation that covers the whole of KZN, as well as the NE Cape forests and the Free State. It is based at Sappi’s Shafton plantation at Karkloof, just outside Howick.

The KZN FPA co-ordinates activities of a number of regional FPA’s based at Vryheid, Melmoth, Kwambonambi, Weza, Ugie (North Eastern Cape) and Umtata, covering a total of some 304 000 ha.

When SA Forestry visited the Shafton base there were six bombers, four spotter planes and a big MI8 MTv Russian-built chopper (provided by Working for Fire) standing by on the airfield, ready to be deployed in the event of fire.

KZN FPA Operations Manager Simon Thomas explained that the association operates during all daylight hours during fire season. On all Red and Orange days spotter planes are patrolling the skies, keeping a sharp eye out for telltale signs of smoke.

“There is no controlled burning allowed on Orange and Red days, so any sign of smoke spells danger and we react immediately,” said Simon.

Controlled burning is not recommended on a high Yellow day either. Although on the day that SA Forestry team visited Shafton things were quiet, the fire season this year started early and there have been a lot of fires already.

“We have had aircraft on standby since May 14 and we have attended 28 fires. The bombers have flown a total of 85 hours already by early June,” Simon said.

Contributing to dangerous fire conditions over most of the country were good early rains, followed by unusually hot and dry conditions which resulted in high fuel loads.

“The weather has been hot, dry and windy so there have been few opportunities for farmers and foresters to burn, and when they do the fires have been getting out of hand,” said Simon.

One fire that got away started in the Karkloof early in the season and did considerable damage. “It was a horrific day with 74 km per hour winds measured on the runway. There was severe turbulence and the fire was burning for 18 minutes before we could get into the air,” said Simon.

“Time is most important in this business – we need to get to a fire very fast to have a chance of putting it out. If forest managers see smoke where there shouldn’t be smoke, call us even before you go and investigate (especially on Red and Orange days). It’s much cheaper to call the bombers back than to have to fight a runaway fire.”

Fighting fires is a tactical business. The aircraft crews are highly trained and bomber pilots have hundreds of hours of fire bombing experience behind them. This is essential as they have to come in low to drop their load of water mixed with fire retardants.

Ideally a fire should be stopped with the first bomber load and wetted down with the second. Ground crews should arrive with the first load and mop up. When used as a second line of attack the bombers’ efficiency is greatly reduced.

The helicopter is an effective fire fighter as it can drop 3 500 litres of water at one pass, but it has to have access to water, such as a farm dam, close by. Choppers also provide vital logistical support. The bombers drop around 1500 litres at a pass, but must return to an airstrip to refill their tanks after each drop. When a dam and an airstrip are close, the two in tandem are highly efficient.

“We keep a log book of each fire and take digital photos so we can assist with fire post mortems and any possible legal claims,” said Simon.

Simon appealed to landowners to be very vigilant during the fire season, especially when weather conditions are bad.

“Never burn during the heat of the day – burn early or late. Make sure you know the weather forecast before burning – phone us if necessary,” he said. “Many fires occur on Green and Yellow days because landowners are not paying attention,” he warned.

In KZN the last day to burn firebreaks is 31st July, although some insurance companies insist that clients don’t burn breaks after mid-July. Prohibition on the burning of brushwood was end May. 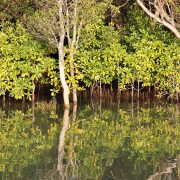