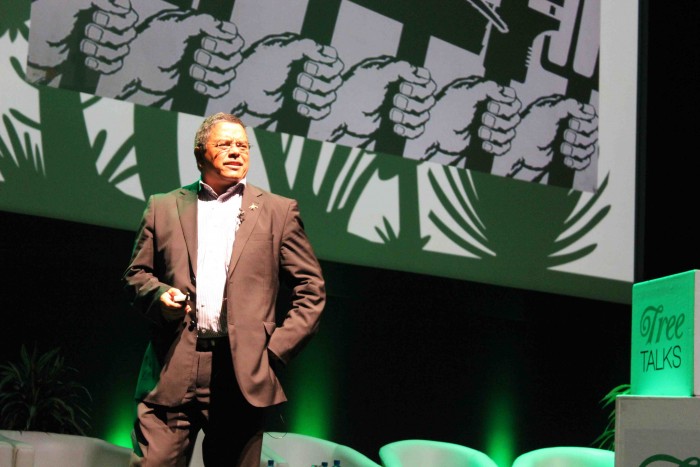 Trevor Abrahams, DG of the WFC, presenting a Tree Talk on the Working on Fire programme.

Delegates attending the 14th World Forestry Congress will seek tangible solutions over the next two days to the global challenge of feeding a growing human population – including a burgeoning, consumptive middle-class – while limiting the extent of climate change and environmental degradation.

He said that one of the major trends that have emerged over the opening three days of the gathering has concerned the sustainable use of forest resources.

The notion of tree hugging, leaving forests to grow for their own good, is quite clearly being replaced by a notion of sustainable development and hence an engagement with our forestry sector that allows for sustainability – and certainly, use.

The winner was Sofia Alvarez Capunay from Peru with a self-portrait titled ‘you are a leaf’. She said the photo shows the inter-connectedness of people and the forest.

The award was presented by Prof Edith Vries, Director-General of the Department of Agriculture, Forestry and Fisheries. 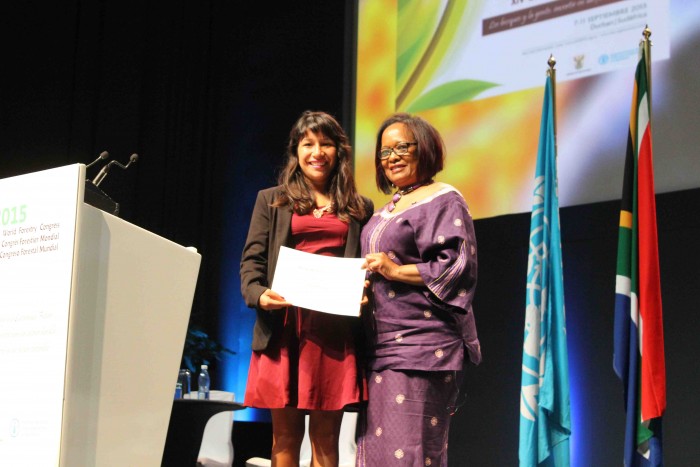 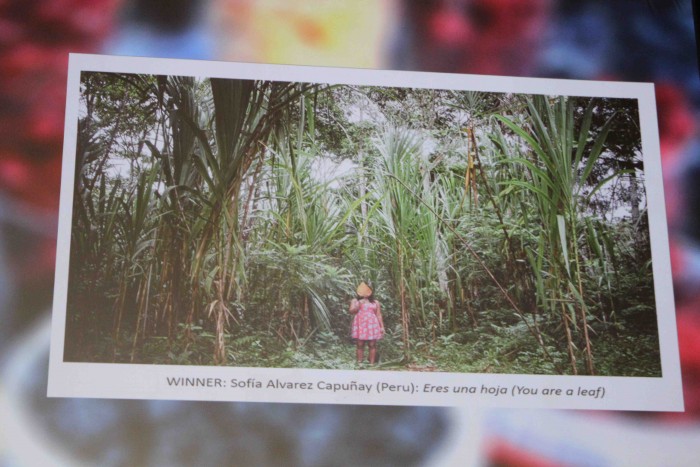 Delivering a Tree Talks presentation on day three of the WFC, Secretary-General of the Convention on International Trade in Endangered Species of Wild Fauna and Flora (CITES), John Scanlon, said advances in technology and transport afforded people the potential today – through unregulated, unsustainable or illegal trade – to wipe out a species in no time at all.

“We’ve also seen a massive increase in the middle-class, a lot of prosperity generated… a lot of disposable income is available… We are confronting heavily armed organised criminals who are stealing wildlife at an industrial scale. The future of wildlife is going to be determined by the actions taken by each one of us, both as consumers and as citizens,” he said.

Wildlife Forum panelists discussed how strengthening communities’ roles in wildlife management could help conservation. Drama students from the University of KZN put on a short play during one of the breaks which highlighted the issues around trophy hunting, conservation and poaching. 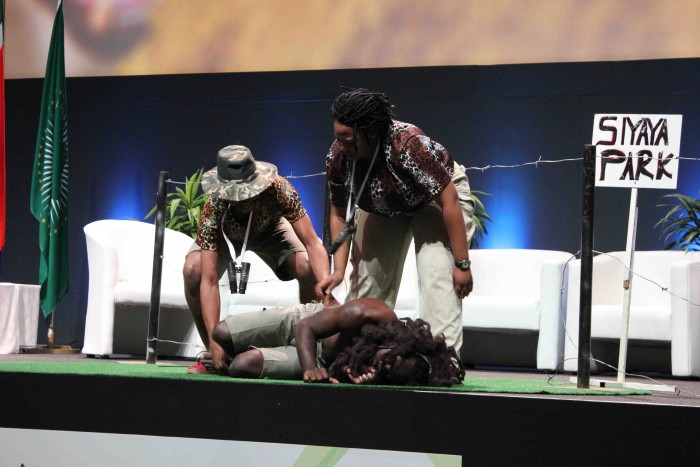 The drama depicts a trophy hunter with a dead lion.

WWF presented a side event on the work they are doing in the Umgeni catchment in KwaZulu-Natal, South Africa, to promote ‘resilient landscapes’. This involves creating a platform for dialogue and collaboration between all of the water users in the catchment to share ideas and work together to improve water management. This includes timber, dairy, sugar and crop farmers, water authorities and communities, as well as stakeholders in the value chain such as food retailers, insurers and bankers. 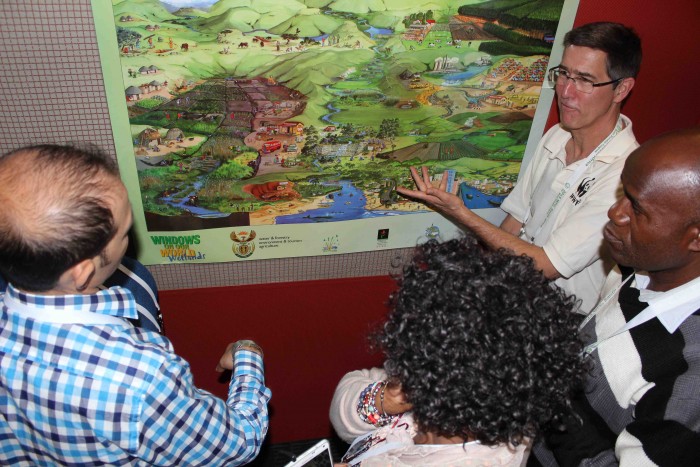 David Lindley of WWF discusses resilient landscapes with delegates at the side event.

South Africa’s pioneering Working on Fire programme has enjoyed a high profile at WFC 2015. The WoF firefighters provided an impressive march at the opening ceremony of the Congress, were the focus of a side event and a Tree Talk by the Secretary General of the WFC, Trevor Abrahams.

WoF is a South African government programme that recruits young people from marginalized communities, trains them as firefighters and deploys them in fire-prone areas – including forests – to provide fire fighting services. The programme provides jobs for young people who are unemployed and/or unemployable, and most important of all, gives them a sense of dignity and hope that they can make a positive contribution.

Trevor said that WoF has the highest percentage of women firefighters compared to similar programmes anywhere in the world.

Young people are well represented at the WFC, and today held a ‘Flash Mob’ event to let the Congress delegates know that they want to have an input into the shaping of a global strategy on forests, which they say will profoundly affect their own lives and future.

The youngsters donned white teeshirts and danced on the lawn outside the ICC while a deejay played some heavy beats. They then formed themselves into the letters W F C and a tree. 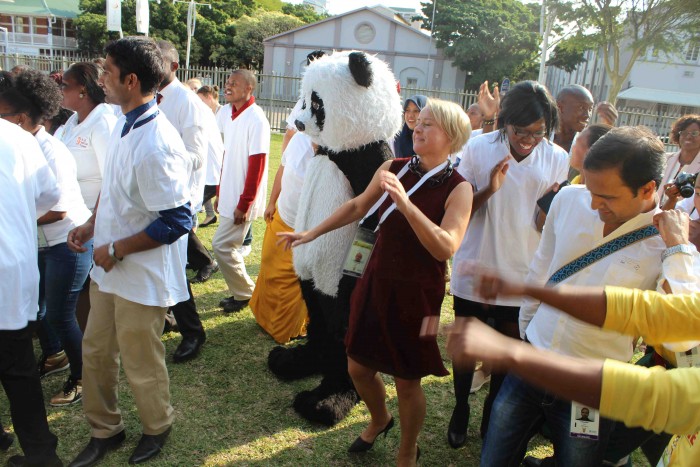 Not everyone at WFC is in agreement about all aspects of forests and the way forward. Members of the Global Forest Coalition have voiced their opposition to the expansion of planted forests around the world. Miguel Lovera Rivas of the University of Asuncion in Paraguay says that WFC is dominated by commercial interests and that it is ‘business as usual’ while the world’s forests continue to disappear.

He said we need ecological functionality from forests – not monocultures. He said plantations are not renewable resources, as is claimed, as they deplete soils, use up water, promote soil erosion and replace biodiversity.

He acknowledged that there is a role for tree planting, but said “not every tree is a good tree for the ecology”.

“The impacts are permanent – the line has been crossed,” he said

The contribution of this group and the indigenous community groups into the discussions taking place at the Congress are important as they highlight the complexity of the issues surrounding forests and promote lively debate.

Check out the short film below wrapping up Day Three of the 14th World Forestry Congress: 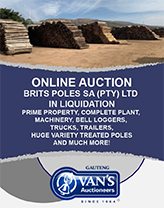