Forestry around the world

Perching on the high hills of north eastern corner of India at the foothills of the great Himalayas, Mizoram State is a storehouse of natural beauty with its endless variety of hilly terrain, meandering streams, deep gorges, and rich variety of flora and fauna. Flanked by Bangladesh on the west and Myanmar on the east and south, Mizoram is fairly isolated from the subcontinent of mainland India. Mizoram has a pleasant climate. It is generally cool in summer and not very cold in winter. The entire area is under the direct influence of the monsoon. 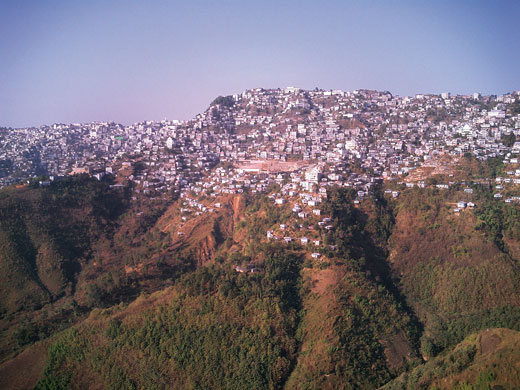 Aizawl: The state capital of Mizoram.

The main native tribe in the state are the Mizos, whom historians believe are a part of the great wave of the Mongolian race spilling over into eastern and southern India centuries ago. They came under the influence of the British missionaries in the 9th century, and now most of the Mizos are Christians. One of the beneficial results of missionary activities was the spread of education. The missionaries introduced the Roman script for the Mizo language and formal education, resulting in a literacy rate of 95% – the highest in India.

World-renowned for their hospitality, Mizos are a close-knit society with no class distinction and no discrimination on grounds of sex. The entire society is knitted together by a peculiar code of ethics ‘Tlawmngaihna’ an untranslatable term meaning “to be hospitable, kind, unselfish and helpful to others”. Ninety percent of them are cultivators and the village exists like a big family. The Mizo people have learnt over centuries to obtain many plants of medicinal value from the forest.

Forests constitute a dominant feature of the state of Mizoram’s landscape, economy and environment, with over 80% of the state covered in forests. However, human intervention is taking its toll on the forests. Activities like shifting cultivation and illegal felling has led to the degradation of a large part of these forests.

The forests are subtropical in nature with many bamboo species. Bamboos are easy to grow and they are used in a variety of ways by the local population, most notably as building material, handicrafts and furniture.

However, they do have some characteristics that render them less attractive. Some bamboo species are known to have a fixed life cycle after which they flower and die and a new generation then emerges from the seedlings. In Mizoram, two species are well known for this: Melocanna baccifera and Bambusa tulda, which both have lifecycles (and thus flowering cycles) of 48 years. However, the two species never flower at the same time. The total flowering time spans over a three-year period. This causes two major problems:

Firstly, due to the entire standing stock being eliminated after flowering, all local industries which are dependent on the bamboo must find alternative sources to remain in business. This leads to further depletion of bamboo sources and thus poses an environmental threat to exposed soils.

More importantly, the fruit of these two bamboo species are edible and after flowering, the sudden enormous increase in food causes an explosion in the rat population. This leads to the destruction of other food sources – most profoundly the rice crops grown over the flowering time of the bamboo, which in turn has led to large famines in Mizoram in the past.

There is also currently no known method to prevent flowering, but one proposed solution is to grow bamboo from different populations, which flower at different times in the same forests so that only a portion of the forest will flower at any one time. This can further be complimented by the introduction of other monopodial bamboos, to permit some cropping when the current bamboos are flowering. It seems like the foresters are on their way to finding a lasting solution to a long-standing problem!