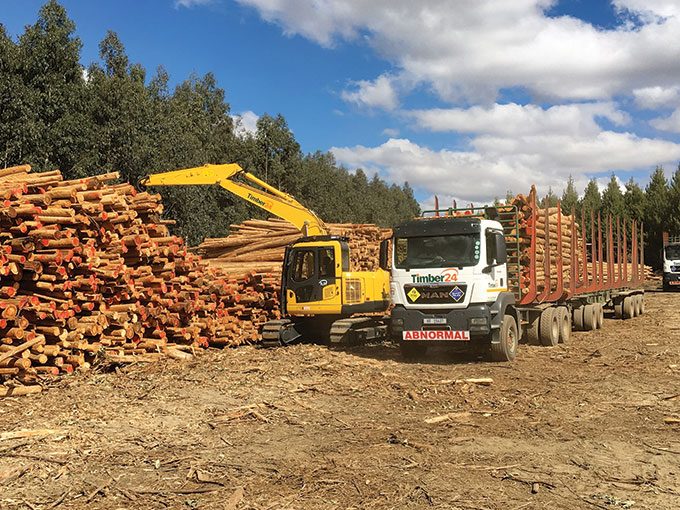 4th generation PBS vehicle being loaded at a roadside depot. A slightly shorter overall length of 23 metres improves stability and maneuverability, allowing the truck to get closer to the stump.

Timber24 is one of the leading transport companies hauling timber in South Africa. A subsidiary of Barloworld Transport, Timber24 operates some 72 trucks in Mpumalanga, KZN and Eastern Cape and moves 2,7 million tons of timber per year. It was one of the first transporters in South Africa to introduce PBS vehicles back in 2007, and is currently operating with 4th generation PBS designs.

The Timber24 4th generation PBS truck is a rigid 6×4 truck drawing a 5-axle drawbar trailer equipped with air suspension. The trucks are rated at 377kw or 362kw depending on the truck model.

Each unit has EBS and ABS controlling the braking in loaded and empty situations which enhances safe operation.

These PBS combinations are 23m long with a GCM of 67 500kg which allows payloads of 47 tons.

All these combinations are fitted with on-board weighing systems linked via the truck telematics to the tracking control rooms.

An interesting feature of the current PBS trucks compared to the first generation is that the vehicle length has reduced from 26 metres to 23 metres, without sacrificing payload, thanks to advanced design.

The benefits of a slightly shorter vehicle are more stability and much improved maneuverability.

He says that the use of these PBS vehicles in the Timber24 fleet is reducing the truck numbers on the road at a ratio of 4 x PBS vs 5 x standard combinations while moving the same volume of product, resulting in cost savings of up to 15% on the delivery cost.

Timber24 is currently running 44 PBS vehicles, including six specialized rigs designed to carry 18.5 metre sawlogs from plantation to mill in the Weza district of KZN for Merensky. 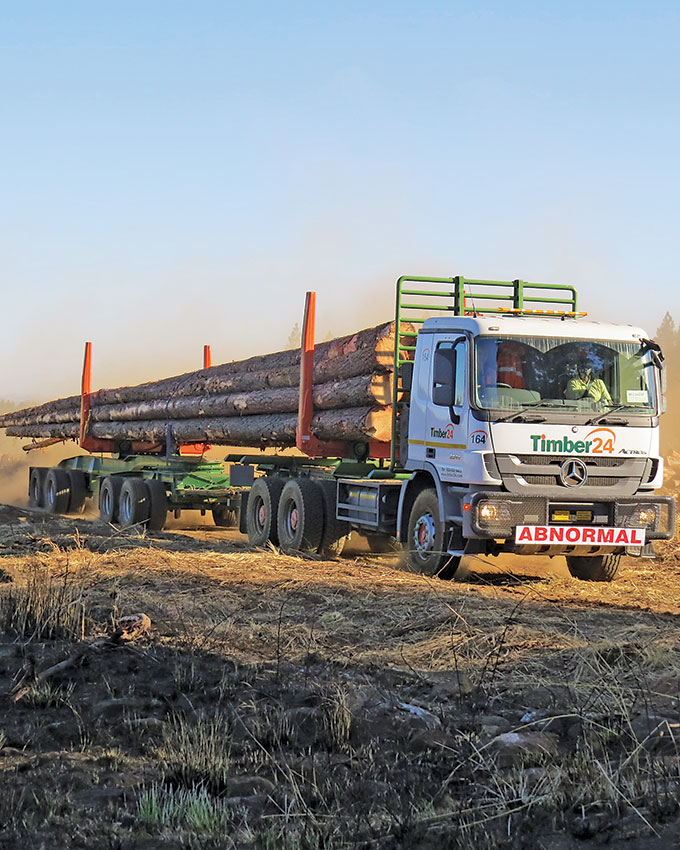 For this contract Timber24 has joined forces with the Singilanga Directorate Trust which incorporates the Langeni and Ntsingisi community trusts.

Specialised trailer design
These specialised long length trailers, which are a first in South Africa, were developed in collaboration with New Zealand-based Patchell Industries and were built by Afrit.

The truck carries its own trailer on the return journey from mill to plantation, thus reducing maintenance and tyre wear and tear. It also means the truck requires less space to turn around and position itself for the next load.

Timber24 timber trucks are loaded predominantly by 13.8ton excavators, capable of loading a truck in under 15 minutes with little disturbance to the depot surface. Additional log handling equipment used at mill yards and depots include truck-mounted cranes and Bell three-wheelers 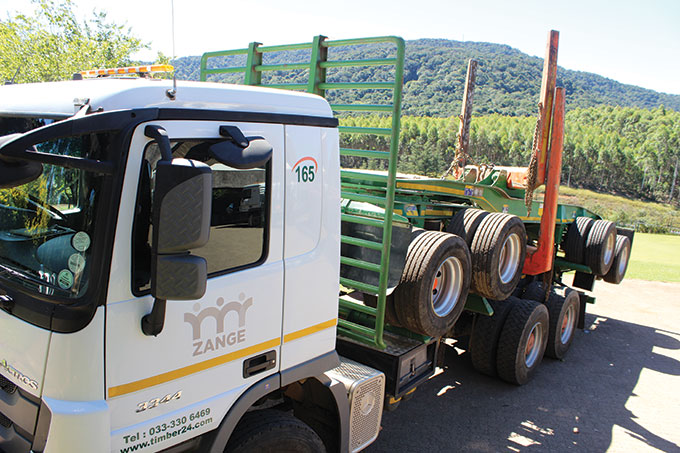 The truck carries one of its trailers on the return journey from mill to plantation depot to reduce tyre wear and tear. 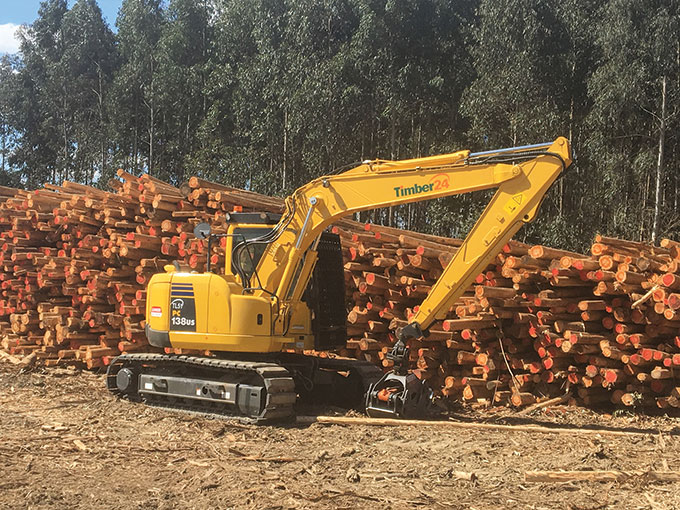 This excavator can load a PBS timber truck in 15 minutes.

PBS management systems
Timber24 uses an in-house programme known as ‘Max’ (Management and Execution) as a planning tool. Trips get pre-loaded and all relevant information is fed into the system live. This makes drawing reports easy and up to date.

Four 24-hour control rooms live track the various fleets of trucks. Payloads are managed and recorded by the controllers on line, and are linked live to the vehicle tracking. Scale sheets get used to manage accuracy of all onboard weighing systems.

Approved routes
The controllers manage and enforce driver resting times and make sure only approved routes are being used. They have contact with drivers on truck phones.

Timber24 also makes use of a number of systems to manage and improve fleet efficiencies and performance.

Drive cam is a video recorder that focuses on the road and the driver. The recorder is triggered by cab movement such as in harsh braking, harsh cornering, accident situations, and multiple behavioral issues. 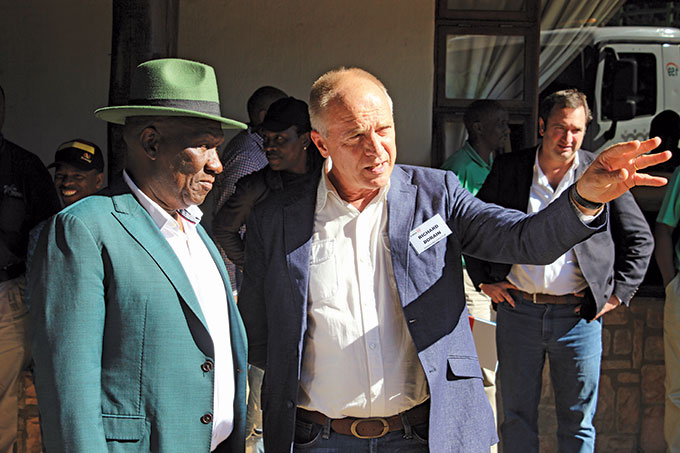 Richard Borain, MD of Timber24 explains the advantages of hauling timber with PBS trucks to former Deputy Minister of Agriculture, Forestry & Fisheries, General Bheki Cele, at the launch of the Timber24 Zange contract in Weza in 2017.

Drive smart
Drive smart is linked to the truck telemetry and is a behavioral system that focuses on the driver. It identifies the driver tag and records driver fatigue, driving style and driver consistency. Drivers get rated and managed accordingly.

Each depot site has an experienced operations manager who oversees every aspect of the day-to-day running of the fleet, while fleet managers assist with daily planning and executing.