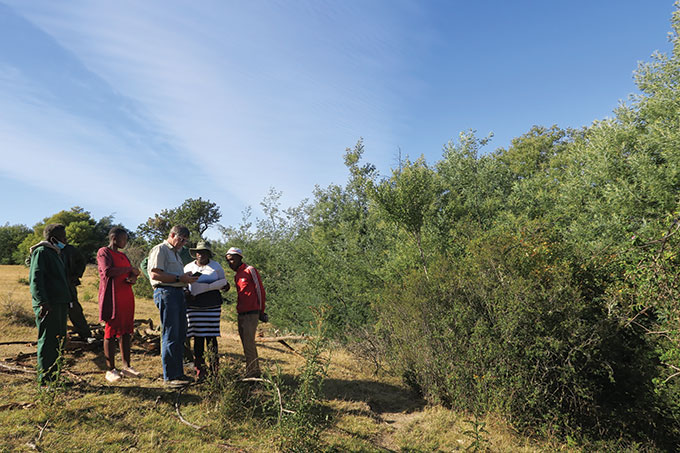 While most of South Africa was still living and working under Level 3 lockdown due to the Coronavirus pandemic sweeping the country, CMO was busy certifying nine small-scale plantation forest growers and two community-based wattle jungle clearing projects through their FSC group scheme, established in South Africa in June 2019.

This has been hailed as a ‘breakthrough’ by forestry stakeholders who have been trying unsuccessfully for many years to get small scale plantation forest growers certified.

Similarly, the certification of two community-managed wattle jungle clearing projects near Matatiele in the Eastern Cape is a model that could be used to unlock supply chains and add value by linking these projects to premium markets.

The key to unlocking the certification puzzle for the small-scale growers, as well as the wattle clearing projects, is a software programme developed by CMO that turns an expensive, complex, document-heavy process into a user-friendly system that runs on a PC portal that communicates with the cloud, and then in turn connects to an app driven from any mobile device. This app guides the prospective members through a step by step process to meet the requirements of FSC principles and criteria, and enables an internal CMO resource manager to audit a farm in the field without the need for burdensome, time-consuming paper-work. 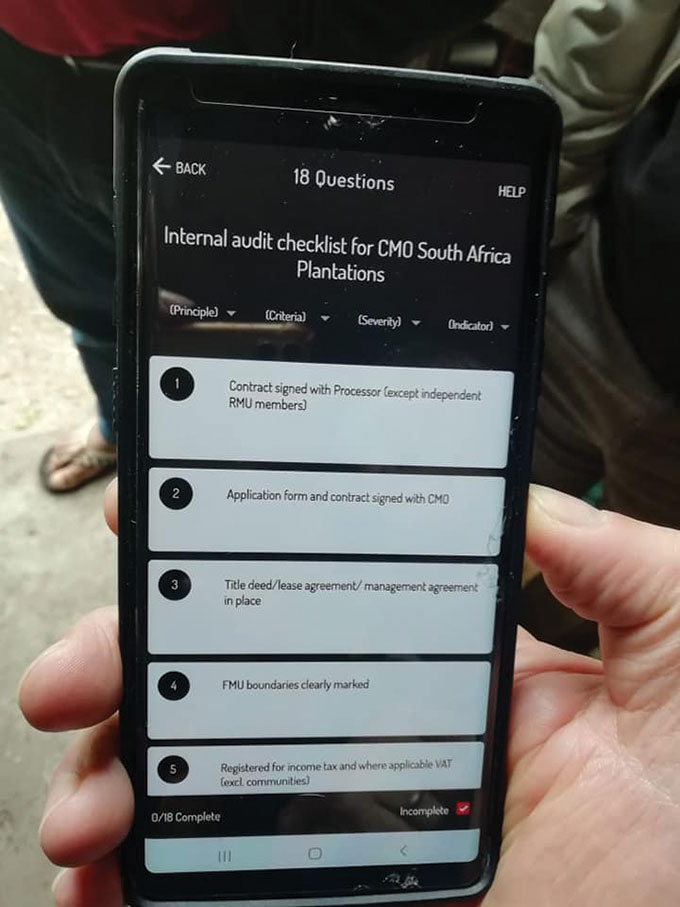 The app runs on a mobile phone to simplify the certification process for the auditor.

CMO is also using this programme in their Group Schemes in Namibia, Uganda and Thailand.

FSC Southern Africa Manager, Manushka Moodley, says FSC has been working with Mondi Zimele who provide support services to small-scale growers in Zululand. These growers supply Mondi with pulp logs – through their implementing agents, Awethu and Khulanathi. The focus of this work has been on preparing the farmers for FSC certification.

The finalisation of the South African National Standard in 2018 provided another piece of the puzzle by providing a locally relevant standard to base certification of the small-scale growers upon. The Standard implemented a risk based approach in the development of the indicators and went through extensive consultation processes with local stakeholders.

Meanwhile CMO had registered their Group Scheme, with Awethu Forestry fulfilling the role of Resource Manager, and working closely with the tree farmers to prepare the way for certification.

The first nine growers based in northern Zululand were certified in mid-June. Michal said the process went well with a few minor CARS, which have to be closed out within 12 months. The average size of the individual farmers’ gum stands is around 3 ha, according to Sizwe Mtengu of Mondi Zimele.

Michal said the growers were thrilled to get certified, which qualifies them to receive a R31 per ton premium price for their timber at the mill gate. 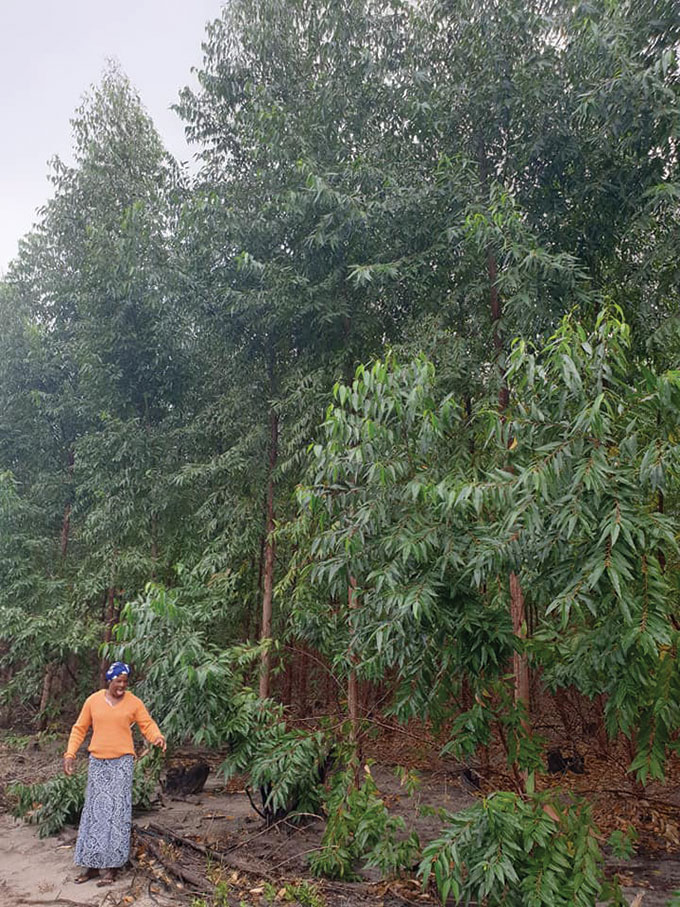 The first small-scale grower to get certified by FSC in Northern Zululand. These trees are only three-years-old.

Norman Dlamini of FSA confirmed that they were in discussions with CMO to use their Group Scheme to roll out FSC certification to more small-scale growers around the country.

Meanwhile the CMO Group Scheme has managed to certify two community-owned areas near Matatiele in Eastern Cape. The land areas cover 500ha in the Colana and Sibi traditional authority areas near Matatiele. Two charcoal manufacturing enterprises, EcoChar and KwaBhaca Nature Solutions, have become members of the CMO Group Scheme so that their product can be FSC certified.

Michal explained that the certification is based on the Natural Forest standards of FSC as there are natural forest patches on the communal land. The focus of the operations in these areas is to clear invasive black and silver wattle, which is negatively impacting natural rangelands, reducing biodiversity and drying up scarce water resources. Community members have started small enterprises converting the cleared wattle timber into charcoal which is bagged and sold. 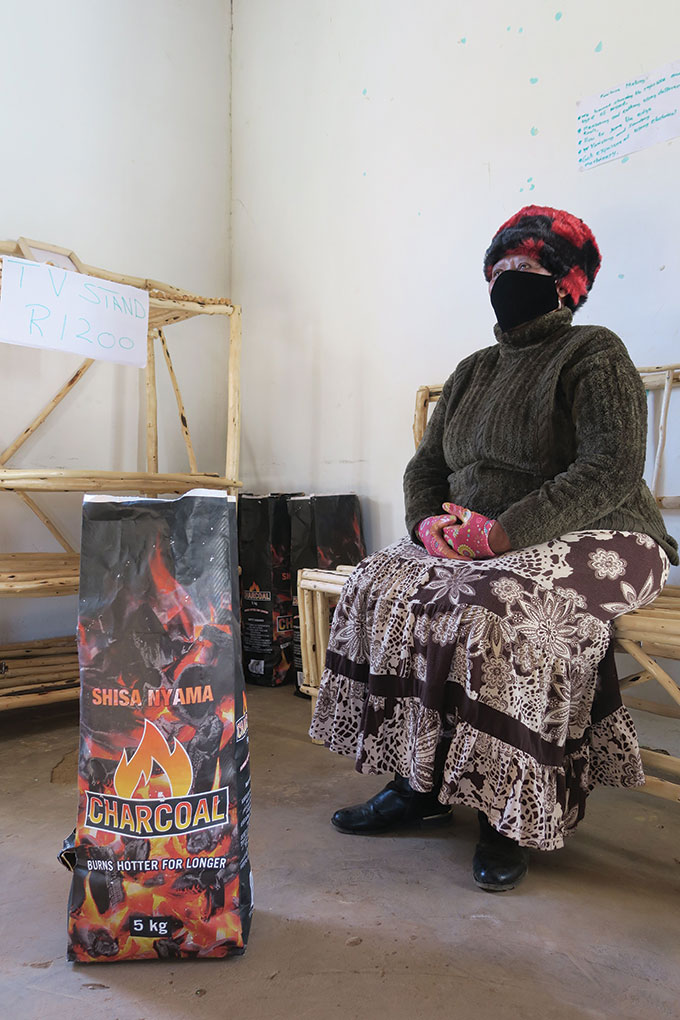 Charcoal produced on the Sibi traditional authority land will be FSC certified. 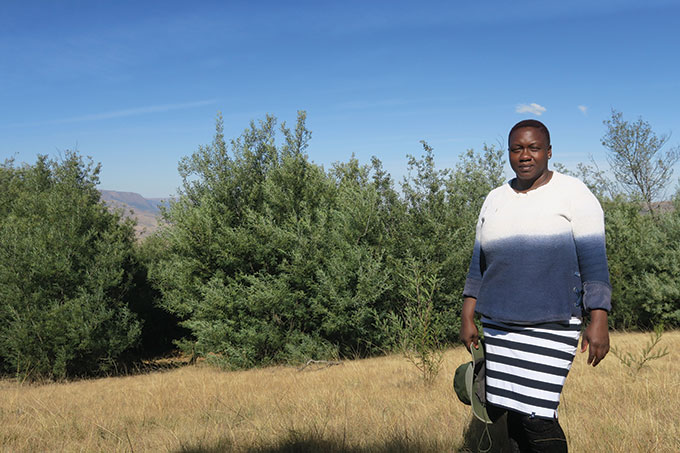 Charcoal entrepreneur Bongiwe Mafuya has joined the CMO Group Scheme so that the charcoal produced by her business, KwaBhaca Nature Solutions, can be FSC certified and sold into export markets. “I am going to be clearing wattle from rangelands in a way that benefits the community. Our community might be in the most remote rural area, but we can make a mark on the world,” said Bongiwe. (Photo: Manushka Moodley)

The FSC certification will give the charcoal produced on these farms access to domestic and international markets, attracting an additional R300 per ton premium, when compared to the prices of non-certified charcoal.

Michal says that in order to maintain their FSC certification, the communities will be required to implement effective follow-up on the cleared wattle camps to ensure that the wattle doesn’t re-grow, and that the benefits of the alien clearing is sustained. This crucial follow-up – which is costly and labour-intensive – has been one of the failings of many alien plant clearing projects around the country over the past 20 years.

“The milestone achieved with FSC certification by smallholders in South Africa has demonstrated how the FSC standards can be contextualised to suit local conditions and facilitate the implementation of responsible forest management,” commented Manushka.

“FSC certification will provide small forest owners and community managed forests greater access to local and international markets. To sustain the knowledge and practical field experiences gained by smallholders in use of the FSC framework, FSC International continues to build their capacity; and will release new certification solutions specific for smallholders in early 2021, including the revised version of the Group Scheme standard.” 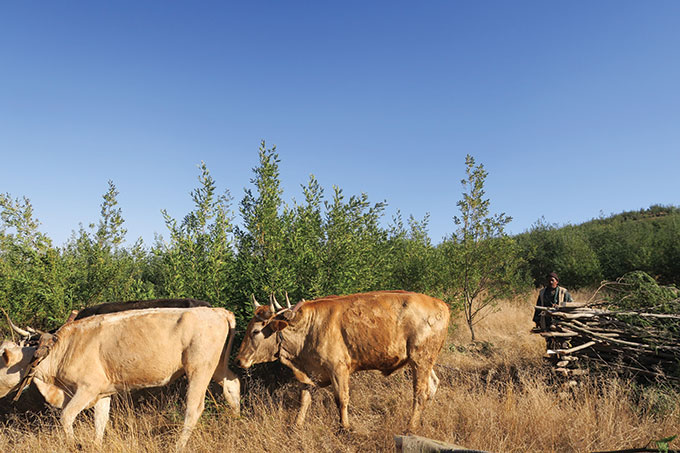 Wattle clearing work in the Eastern Cape is done the old fashioned way, cutting by hand and hauling wattle to the kiln with cattle-power. 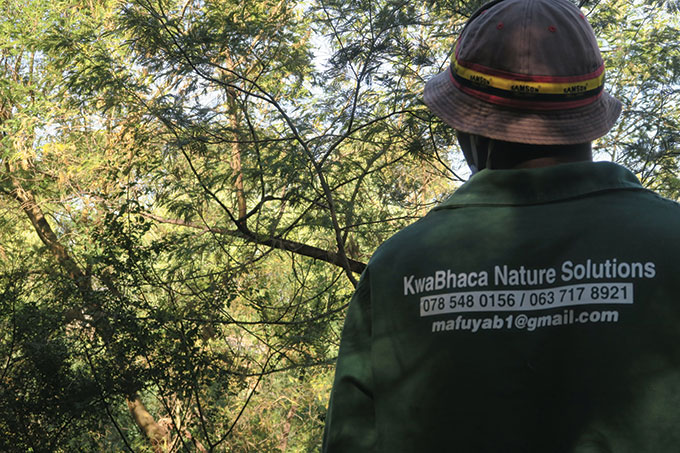 Lots of jungle wattle to clear for charcoal.