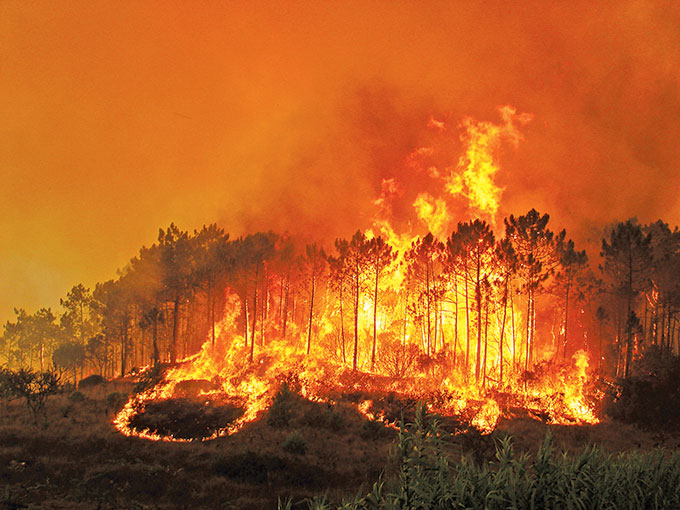 Big spotting fires can cause havoc in dry or green-drought conditions when the weather turns nasty.

When green isn’t always good
Drought is generally recognised as a prolonged, abnormally dry period when the available water is insufficient to meet the needs of humans, animals and plants. KZN is currently experiencing what is known as a ‘green’ drought, despite the fact that plenty of rain has fallen in some areas. A green drought occurs when there is enough rain to keep the landscape from looking dried out and vegetation appears healthy and lush, but there is not enough rainfall to address the needs of agriculture. A ‘green drought’ can cause pasture growth rates to decrease by 50%.

What has brought about this situation?
This summer, KZN experienced unusual/unseasonal weather patterns with uneven rainfall, often in the form of heavy storms. In addition, heat wave conditions in December 2018 and early 2019 led to high evaporation rates. The water table, farm dams and provincial dams have not been adequately replenished and by mid-April, rainfall figures were below normal compared to long-term average statistics.

At the beginning of February 2019, the average level of provincial dams in KZN was 55.3%. Farm dams were at a precariously low level (the best recorded level was 70% full), and many earth dams had dried up. Springs that have traditionally never run dry ran dry in January. The areas of Uthukela, Umzinyathi, Amajuba, Zululand, Harry Gwala, Alfred Duma/Ladysmith and parts of Umgungundlovu and Mpofana have been particularly hard hit, experiencing an officially recognised ‘severe drought’, when ‘water supply is insufficient to meet the socio-economic and ecosystem needs’.

There has also been extensive silting of irrigation dams because of erosion and localised flooding during heavy downpours. Any future rainfall will first replenish ground water and farm dams before there is enough to top up major storage dams.

What does it mean for farmers?
The impact on farmers is potentially catastrophic. Irrigated pastures and higher rainfall areas developed bulk but at a slow rate. Planting of summer crops such as maize and soya was delayed. There was also hail and lightning damage from extreme storms, with some areas experiencing the almost total loss of maize and vegetable crops (Mpofana, Richmond, Jozini, Uthukela, and Pongola are some examples).

In the KZN interior, areas near Ixopo/Richmond and Bulwer were slightly improved after the rains during mid-February, with streams and rivers flowing and farm dams fuller. Timber continued to show signs of drought stress in this area, however, and while the veld was green, it was short with not much bulk.

Livestock farmers should be extra careful about securing feed and water for their cattle this winter.

How does it impact on insurers?
Safire Insurance is a Pietermaritzburg-based short-term insurer which started out as a timber insurance co-operative in 1987 and has developed a diverse range of products, including specialist insurance cover for the agricultural sector. When asked about the impact of a green drought on forestry and farming clients, Ruth Bezuidenhout, General Manager of Safire’s Crop Division, said: “In my experience, established plantations are not as affected and especially if the rainfall returns to normal in the following year. Trees tend to catch up, although young trees may be set back a year with normal growth not being achieved. The burning of firebreaks is generally easier as fuel loads are normally reduced but people need to be careful. Burning becomes tricky if there’s a false sense of security because of certain areas looking green. The quick on-site refilling of water tankers and bakkie sakkies when fires break out may also be affected if streams and smaller dams have dried up. Farmers and the timber industry need to ensure that alternate water sources are in place, and that fire-fighting equipment is well serviced and readily available in the event of an emergency fire situation.” 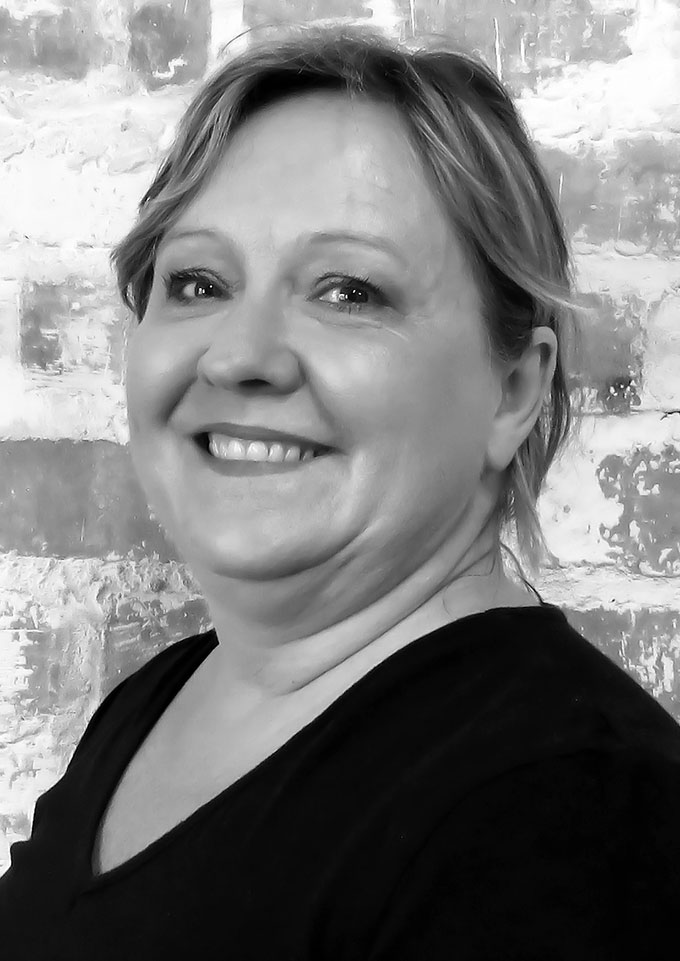 “From a fire perspective, with a drought, fuel levels are lower and thus flammable material is less. The late rains we’ve received could change this by a slight increase in fuel levels, but I don’t think by much. What is of concern though, is the very low dam levels, which will result in less water being available for fire-fighting in many areas of the interior of KZN. This could also have a negative impact on water availability for chopper bombing operations. In terms of firebreak preparations, less fuel could result in firebreak burning not being clean burns. However early frosts may help and assist with early burns.”

Each FPA sets its own fire prohibition regulations, but insurance companies may have their own dates.

“The Safire Insurance burning date ends on 15 July each year,” commented Ruth. “If you have to burn beyond this date an application needs to be made in writing and approval returned in writing to ensure that claims – and especially spread of fire claims – can be considered.”

What steps are being taken by government?
According to a report posted on the KZN Cooperative Governance & Traditional Affairs website, dated 5 February 2019: “We are extremely concerned as we are currently moving into the winter months, which is going to increase the severity of the drought should the rains delay further. We are currently implementing various intervention measures. This is why an allocation of R122-million from the National Disaster Management Centre is being disbursed to drought-affected KZN districts to deal with the most urgent green drought hotspots.” 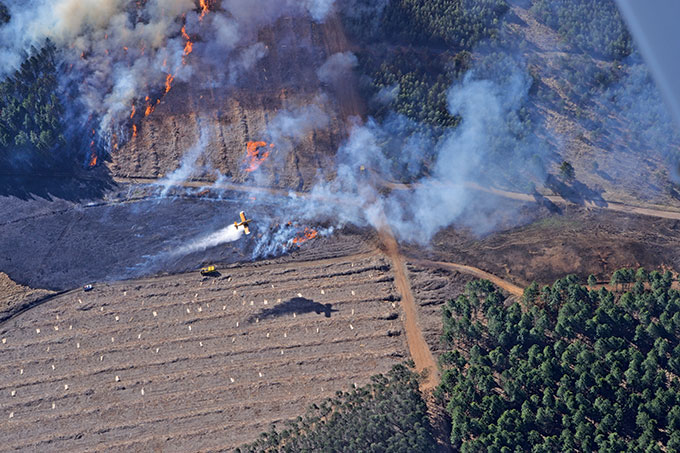 Fire and accountability – how your FPA can help

Ensuring that a veld fire is unlikely to begin on your land, and if it does, is unlikely to spread to your neighbour’s land, is a vital part of being a responsible property owner.

The legislation is clear, as set out in section 34 of the National Veld & Forest Fire Act No. 101 of 1998:
‘In the event of a veld fire, there is a presumption of negligence against the landowner on whose property the fire starts. If a person who brings civil proceedings proves that he or she suffered loss from a veld fire which:
(a) the defendant caused; or
(b) started on or spread on or spread from land owned by the defendant;
the defendant is presumed to have been negligent in relation to the veld fire until the contrary is proven … unless the defendant is a member of a fire protection association in the area where the fire occurred’.

This last sentence is crucial. If the landowner is a member of the local Fire Protection Association (FPA) they are considered to be more ‘fire aware’, and therefore more likely to have taken steps to be prepared for any fire emergency. This is why the immediate presumption of negligence is not applicable. And while negligence may still be proven, it becomes the plaintiff’s responsibility to prove this. The burden is theirs to show how the fire started and spread through intentional or negligent behaviour by their neighbour.

Safire’s clients have the benefit of experienced Safire staff and an established relationship with a legal team on their side, who will assist during legal proceedings, thus reducing stress for the landowner. Safire as the insurer takes over the action in the name of the insured (which is known as subrogation), and although co-operation is naturally still essential, Safire clients generally find that having a helping hand though the process brings immense relief.

What can be done to prevent fires?
The courts set out in the case of MTO Forestry (Pty) Ltd v Swart NO that a “reasonable landowner” does not have to ensure that a fire could never spread beyond his boundaries, but simply has to take reasonable steps to prevent a veld fire from occurring. According to the Act, these steps include:
• Establishing firebreaks
• Having well maintained fire-fighting equipment on hand
• Ensuring personnel are trained, equipped and capable of fighting fires
• Alerting landowners nearby of a veld fire occurring.

Failure to put in place such measures may result in the landowner being found negligent after investigation.

Get reliable insurance cover and sound, professional advice
It is vital for responsible landowners to make provision for Spread of Fire and possibly public liability cover. Safire Insurance Company Limited is a nationwide expert at offering widespread cover for its clients since its inception in 1987, and has a proven track record. Today the company has a diverse range of short-term insurance products that include domestic, commercial, farming and speciality products. Ruth Bezuidenhout, General Manager of Safire’s Crop Division, says: “In terms of fire prevention, while many factors are beyond the landowner’s control, it is essential to identify the risks, to manage these risks and then to rely on top quality insurance to cover any losses that might occur outside of this control.”

“Safire requires that firebreaks are completed by 15 July 2019 or earlier if stated by individual FPAs. Should landowners insured with Safire (both timber and spread of fire clients) not be able to achieve this, they must apply in writing for an extension indicating why they have been unable to complete burning – it is usually wind or frost related – and explain how much burning still has to be done and when they expect it to be completed. Safire will assess each request and respond in writing. This ensures that all potential claims that come about as a result of own burns getting out of control are considered without the burn being seen as a breach of the warranties.”

Landowners should contact their FPA for details about how to join and what steps are required by FPA members (these may vary between FPAs). By being fire-aware and responsible, and having proper insurance cover in place, landowners may rest assured this fire season. 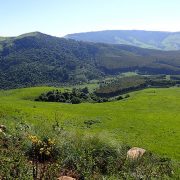