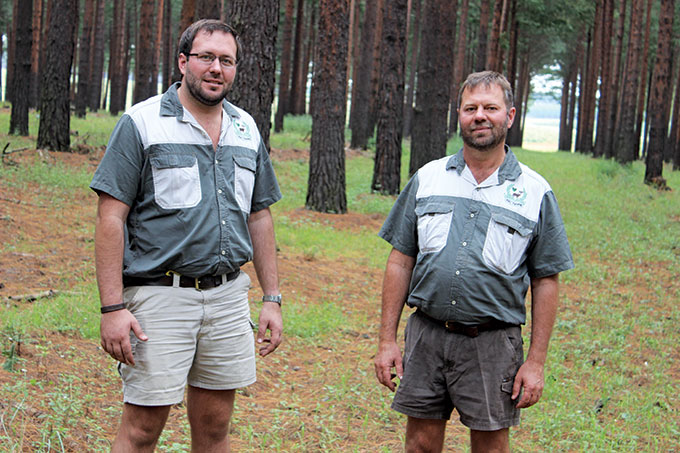 Visiting the KRC farm in Mpumalanga, a few kms from Iswepe, one is immediately struck by the well kept fields, fences, roads and farm buildings. Pine compartments cover large swaths of the gently undulating terrain with towering, well-spaced trees and clean, straight stems that any sawmiller would love to get into his log yard. Then you notice the forest floor, zero weeds and almost no tree litter, the cleanest inter-rows you will see anywhere in South Africa.

It is immediately apparent that this is no ordinary farm. A high level of care, maintenance and management is required to keep these compartments so clean.

The secret to this farm’s success is continuity and pride. It has been farmed and nurtured by the same family for almost a century, and is now in the safe hands of the third and fourth generations. The knowledge about soil, local weather conditions and yields have been passed on from father to son.

Starting out in the 1920s with 300 acres of rangeland, the Paul family has gradually built up the farm acquiring more adjacent land to grow their business into a highly productive mixed farming operation centred around forestry, maize, soya and cattle.

Today KRC Farming is one of the biggest privately owned pine forestry estates in Mpumalanga with 5 000 ha planted on a 25-year rotation. 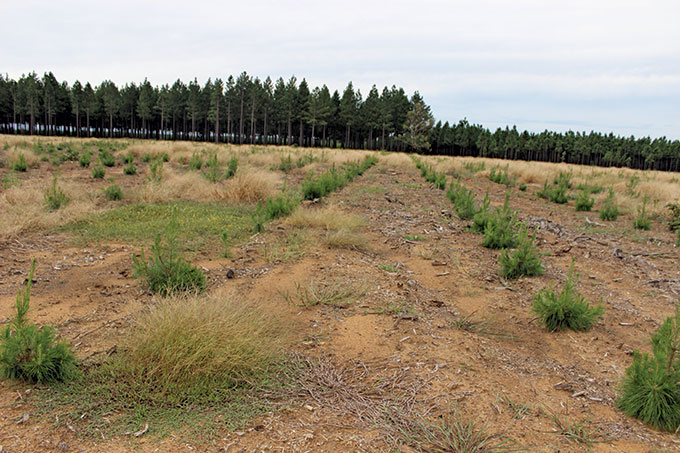 Precision planting … getting it right from the start.

The current managing director of KRC Farming is Kurt Paul. Both of his sons, Ruan and Christian, are now also involved in the business.

The Paul family originally came to South Africa from Germany in 1856 to run a mission station. Kurt’s grandfather, Bernard, bought the original farm in 1924, running a few head of cattle and farming chickens. Bernard’s son, Reginald (Kurt’s father), left school after Grade 9 and started working on the farm full time.

In the 1950s they started growing wattle to supply bark to the bark factory in Iswepe. Kurt started working on the farm with his father in 1988 after completing his military service. At that stage the total area of the farm was 750 ha.

They started planting pine on a sawlog rotation and continued to purchase more adjacent land. They plant Patula on the good soils and Elliottii on shallower soils. They have around 200 ha of gum which is being converted to pine after clearfelling.

The farm is now 10 000 ha in total with roughly half of it planted to forestry. Average annual MAI is a healthy 16 tons/ha. Clearfell harvests at 28 years yield an average 430 tons/ha. Current total annual timber harvest is 84 000 cubes, 60 000 cubes of which is sold as high value structural timber.

Thinnings are sold to a local industrial timber sawmill and the pulp market. The large diameter timber is sold to the Tekwani sawmill in Piet Retief. 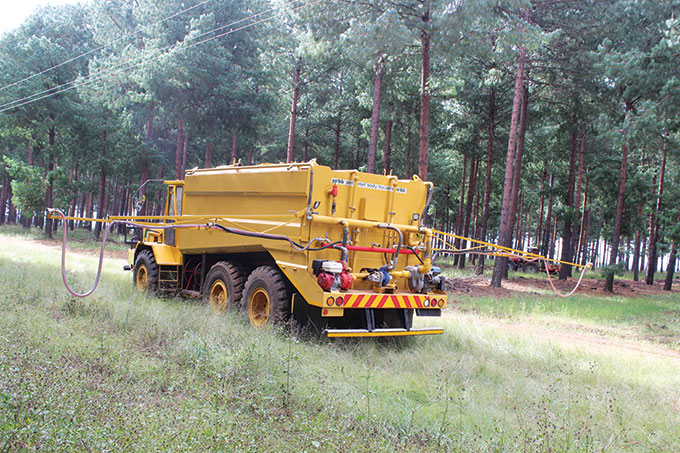 This fire truck doubles as a planter in summer – note the booms on either side. 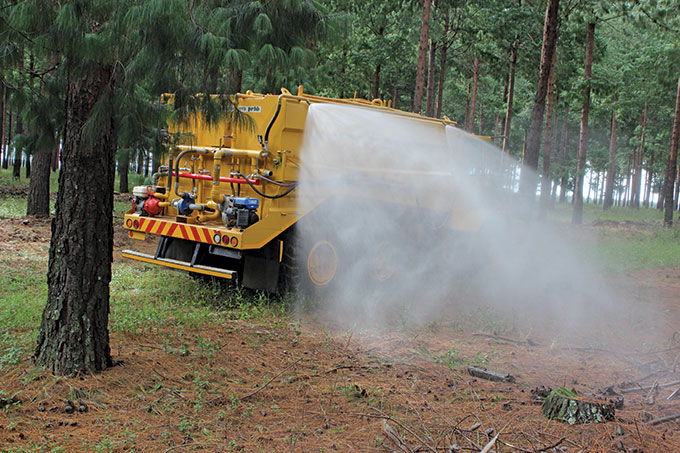 The planting booms have been removed, and it’s now a fire truck capable of putting large quantities of water and foam deep into the compartment in the event of approaching fire.

Timber harvesting is done using the motor-manual system and contracted out to small forestry businesses owned by KRC farm tenants. There are 100 households living on the farm, and Kurt is mindful of the fact that people need jobs, so he has assisted the farm tenants to start their own harvesting businesses. The farm-based contractors employ around 200 people in harvesting and pruning operations.

All tenant households on the farm have electricity and running water, and Kurt’s team has assisted each household to plant one hectare of maize for their own smallholder farming enterprises. KRC Farming contributes to the cost of establishing the maize plots on a rand for rand basis. One ha of maize yields around 6 tons, which supplies all the household’s own needs and leaves a surplus for sale. 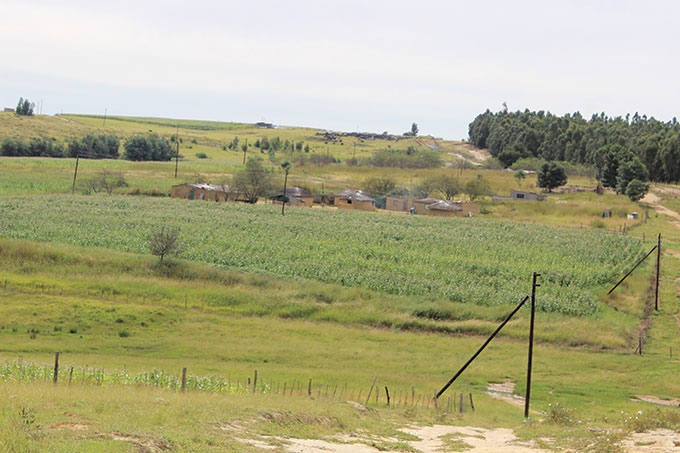 Tenant homestead with one ha corn field. The Pauls assist each family to plant a ha of corn to provide staple food plus a cash crop.

Planting densities on the pine is 1 600. Thinning operations take place at 8, 12 and 16 years, with every 5th row taken out. Final stem count is 300 SPH. Stems are pruned clean up to 9 metres by hand.

The real innovation in KRC’s forestry operations is in the silvics. The farm cattle, which number 1 000 head, are grazed in vlei areas, around compartments and under the canopy to help keep fuel loads down.

Every row is disced annually to turn over the soil and reduce combustible material. A home-made mechanical mulcher is used to chop up slash and tree litter which has been wind-rowed. This serves to improve access, reduce fuel load and speed up the composting process. 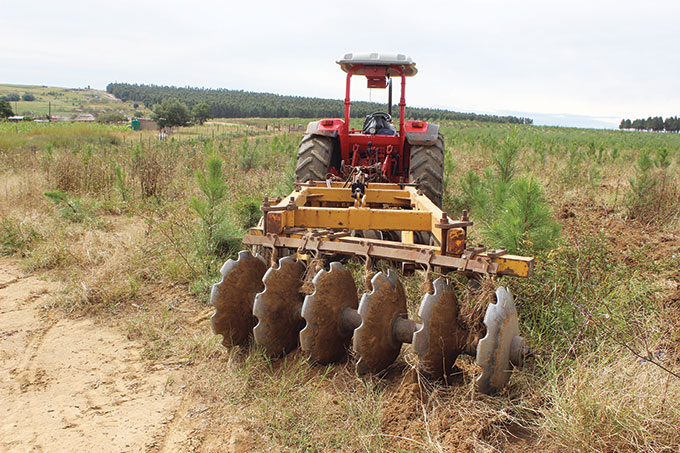 Regular discing between the rows keeps the compartments clean throughout the growing cycle. 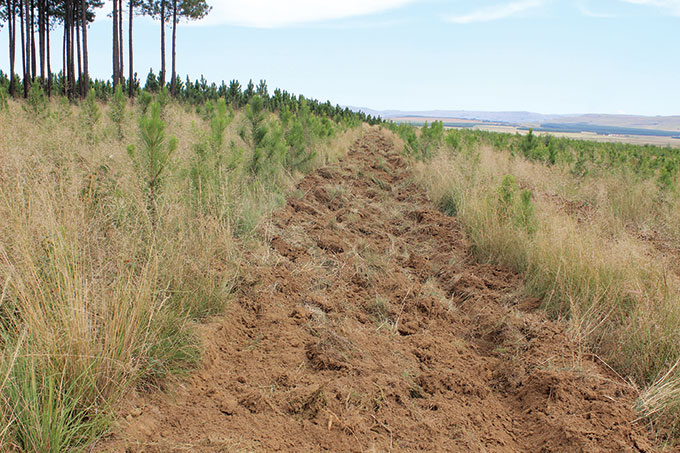 This is what the inter-row looks like after the disc has been through it.

The mulcher is basically a heavy steel drum filled with used oil, onto which dozer blades have been welded. It is simple, effective and cheap. It is pulled by a regular farm tractor and literally rolls over the slash, breaking up the material and flattening it against the ground. 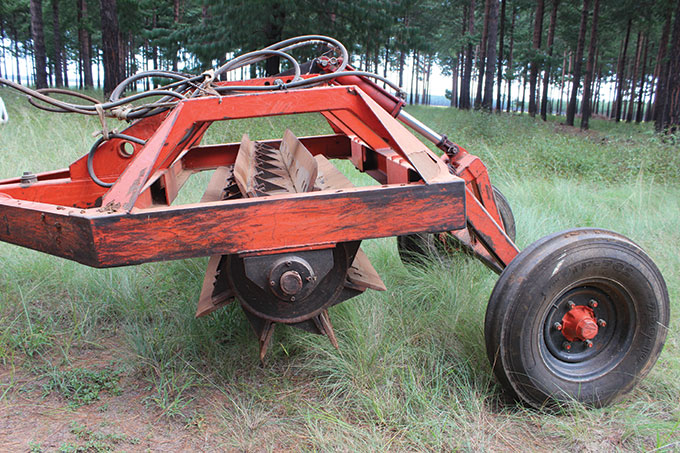 This homemade mulcher is used to break up and reduce the slash after pruning to keep the fuel load down. It is basically a drum equipped with dozer blades and filled with used oil to make it heavy. It is pulled by an ordinary farm tractor, and literally rolls over the slash breaking it up into small pieces and flattening it against the ground. It’s cheap and effective. The wheels are just there to get it from A to B.

They also do under-canopy burning in strategic compartments to further reduce fuel loads.

Coupled with this maintenance regime, Kurt and his team have designed and built their own fire tenders in collaboration with Anco Engineering based in Piet Retief. These totally unique vehicles have all the fire fighting bells and whistles and more, having been designed specifically to meet the needs of the KRC timber farm.

The first is a Bell B20 dump truck converted to a 20 000 litre fire tanker. It also has a planting boom attachment with five planting stations, so it doubles as a planting machine in summer.

The second is a Mercedes Benz fire truck which carries 16 000 litres. Both machines have directional nozzles that can spray water or foam into compartments ahead of a fire off either side as well as off the back of the vehicles, thus saturating the forest floor. The vehicles can also spray a fine mist over the equipment to keep it cool. 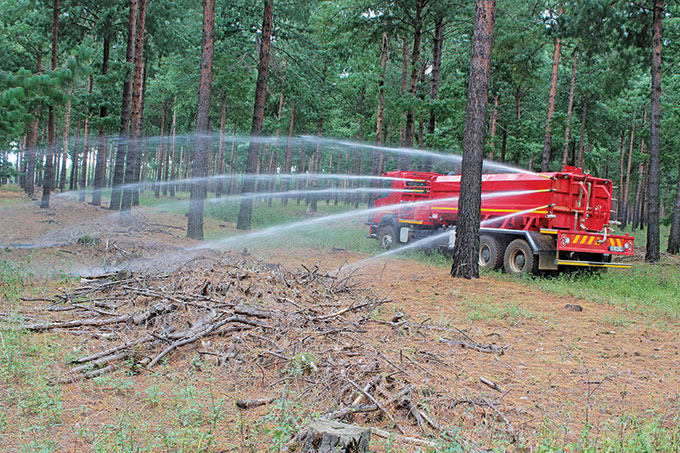 This is a custom built fire truck capable of spraying water and foam off either side or off the back to keep fires out of the plantation.

They also have an air strip on the farm with water tanks so Working on Fire aircraft can land and re-fuel for fire fighting purposes when the need arises.

Kurt says that in 1976 the entire farm burnt down. However since then they have geared up and they have not lost significant hectares since. In fact he says lightning poses a bigger threat to his trees than fire. Apparently the Piet Retief area has more electric storms than anywhere else in the world, and lightning strikes can take out 10 trees at a time.

Unfortunately there isn’t much one can do about preventing lightning – except fell the dead trees as soon as possible so the timber is still good. Kurt has his own fixed wing plane on the farm, and flies over the estate after storms to check for lightning damage.

The management team takes a long term view of forestry, with sustainability built in. The secret, Kurt says, is to always re-plant what you harvest.

Already the next generation is getting involved in the business. Kurt’s eldest son Ruan is working full-time on the farm, managing the grain crops as well as the timber transport. His younger son, Christian, is busy doing BSc Agriculture at Pretoria University, and does the farm’s marketing.

“We are very positive about the future of this country, and we plan 25 years ahead,” said Kurt.