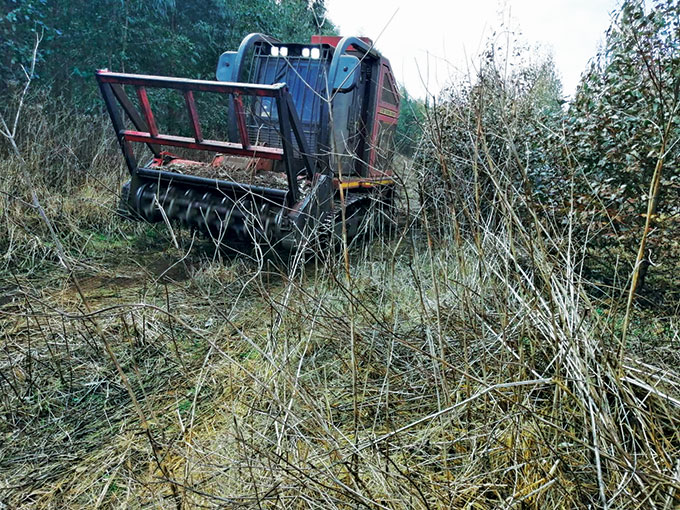 Inter-row mulching with the RT 200 reduced fuel loads (stumps and slash) and improved access to the compartment.

Enviro-Mulch is a mechanized silviculture contractor that provides safe and organised mulching services in South Africa. The company currently has a fleet of 11 mulchers including RT200s, RT400s and RAPTOR 800s.

The RAPTOR 800 was designed and produced in Germany, and combines performance and functionality. It was specially developed for the most difficult tasks such as heavy land clearing, vegetation management as well as the creation of fire breaks, fire risk management and re-cultivating work in professional plantations and forestry.

During the 2020 fire season, Sappi commissioned Enviro-Mulch to fell burnt timber to waste in compartments that were damaged by fire. The Enviro-Mulch team deployed the RAPTOR 800 to mulch the burnt standing timber left in the compartments after the fire. 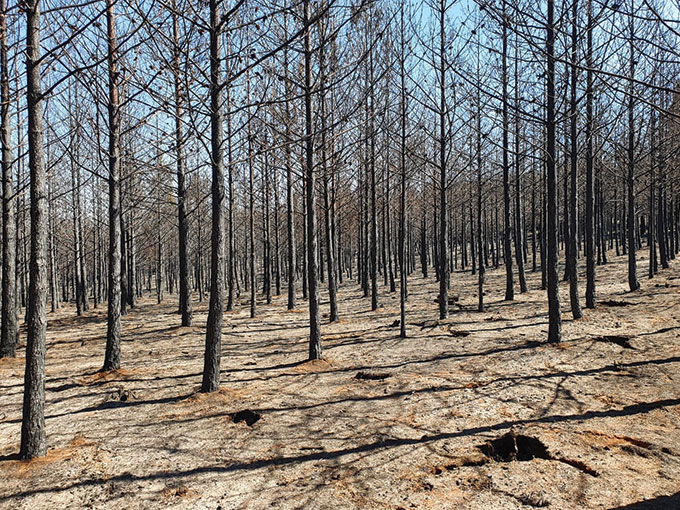 BEFORE: the Raptor 800 was brought in to turn standing burnt trees to mulch.

The operation delivered numerous benefits:-
• Speed and efficiency of operation
• Returns nutrients to the soil
• The mulch covers the soil and retains moisture.
• It offers the client the option of full mechanization after the compartments have been mulched
• Reduces the costs of mechanical planting and pitting.
• Reduces the fuel load, as there is no slash, stumps or unutilized timber left in the compartment.
• Reduces long term maintenance costs with regards to weeding, soil erosion and access in the compartments.
• Enables the grower to get the seedlings into the ground faster, thus gaining a season when compared to normal ‘fell to waste’ operations.

The benefits of the RAPTOR 800 operation were such that other area teams within Sappi showed interest and commissioned the deployment of the RT series in different fire management applications. 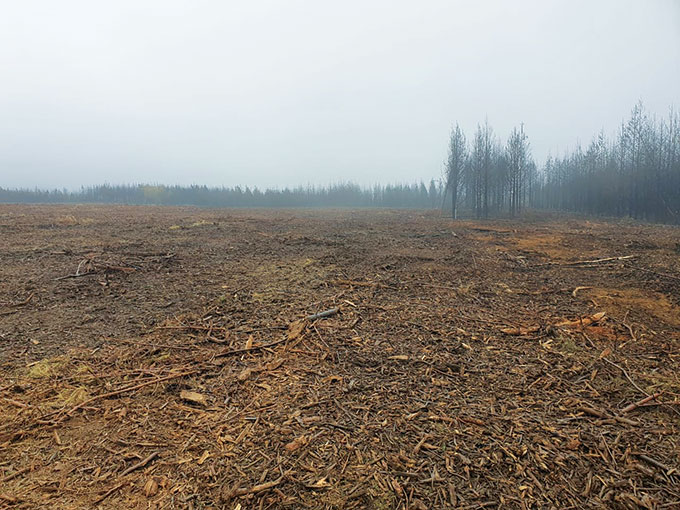 AFTER: the ‘fell to waste’ operation by Enviro-Mulch resulted in a mulch layer covering the entire compartment, which brought many benefits including easy and quick mechanised re-establishment.

Mulching firebreaks
They utilized the RAPTOR 800 to mulch firebreaks on the boundaries where other equipment could not gain access in dense wattle jungles and vegetation, without a big environmental impact afterwards.

The Forestry Manager of Sappi’s Lothair plantation, Daniel James, took the initiative to start inter-row mulching between standing trees in high fire risk areas, in order to reduce fuel loads and create improved access into compartments. The RT200s was brought in for this purpose.

Once the interrow work is completed, a disc can be brought in to disc the lines annually, which will serve as a small fire break within the compartment. This is extremely beneficial as it gives fire fighters extra time to respond in the event of a fire.

Interrow mulching also offers long term benefits in the form of productivity increases in harvesting and extraction operations, due to the inter-row stumps that have been mulched for improved access.

Enviro-Mulch’s RT mulchers are operated, contracted and maintained by the staff of Enviro-Mulch. The RT mulchers can also be purchased from the South African agent, Bergvest Equipment, which is the current supplier of RT mulchers and spare parts – as well as a range of other equipment – in South Africa.