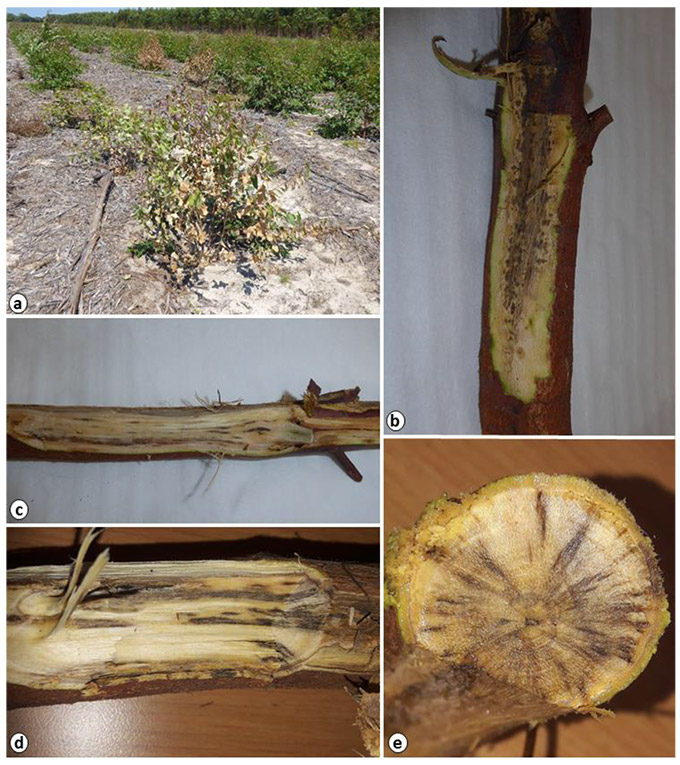 Signs and symptoms of Ceratocystis wilt and canker disease of eucalypts. (a) Wilting of leaves and death of trees, (b) speckling in the bark when cutting into the bark, (c, d, e) streaks in the cambium and wood.

The TPCP team at the University of Pretoria has been alerted to a potential new threat to Eucalyptus clones in KwaZulu-Natal, where six month old trees are exhibiting typical symptoms of wilt and die-back.

Prof Jolanda Roux of Sappi made the initial isolations and identifications. Together with subsequent isolations, morphological and molecular identification by Dr Irene Barnes and some members of the TPCP team, there is now strong evidence to show that the cause of the problem is a Ceratocystis species.

This new disease on young Eucalyptus is of considerable concern because Ceratocystis species cause a serious root and wilt disease problem on Eucalyptus clones in other parts of the world. The disease is known to be a serious threat to forestry in Brazil, but has also caused problems in Uruguay and the DRC.

The TPCP team has the tools and the knowhow to determine whether this is the same pathogen as found elsewhere on Eucalyptus trees, or a new haplotype of the pathogen. Other priorities will be to study key aspects of its epidemiology and mechanisms of spread.

Foresters around the country are urged to keep an eye open for symptoms of the disease, and to alert the TPCP team at the University of Pretoria if they notice it.

Another exotic bug in SA

Brett Hurley and Wilhelm de Beer recently reported that a new pest, PSHB (Polyphagous shothole borer or Euwallacea fornicatus) and its fungus were discovered in South Africa for the first time during 2017.

The PSHB is a 2 mm long ambrosia beetle that is native to Southeast Asia. The beetle carries several fungal species with it when it infests new trees, one of which is Fusarium euwallaceae.

An aggressive ambrosia beetle and its fungal symbiont that has the potential to kill many tree species, were recently discovered in South Africa. Dr Trudy Paap, postdoctoral fellow in FABI, found a lane of infested plane trees in the vicinity of the KZN Botanical Gardens in Pietermaritzburg.

The first report of PSHB in South Africa was by Dr Trudy Paap, a postdoctoral fellow in Fabi at the University of Pretoria. As participant in the International Plant Sentinel Network (IPSN), Dr Paap is tasked to do routine surveys for tree pests and diseases in and around the National Botanical Gardens of South Africa in collaboration with SANBI. It was during such a survey that she noticed small lesions resembling shotgun marks on the stems and branches of mature London plane (Platanus x acerifolia) trees planted along the street outside the KZN Botanical Gardens in Pietermaritzburg. The beetles and fungus isolated from these trees were later identified, based on DNA sequences, as Euwallacea fornicatus (PSHB) and Fusarium euwallaceae, respectively.

Subsequently this beetle has also been confirmed in the Sandton area of Gauteng, where it is affecting numerous tree species, including Chinese and Japanese maple, plane trees, Kapok trees, as well as native paper bark (Acacia sieberiana var. woodii) and wild plum (Harpephyllum caffrum).

Symptoms on the trees vary from patches of white powdered wood (called frass) on the bark surrounding entrance holes of the beetles, to blotches of oozing resin on the bark, or small, elevated lesions on the bark resembling shotgun wounds.

Based on surveys in two botanical gardens in Los Angeles, California the beetle-fungus complex can infest more than 200 tree species. Among these are important crop trees such as avocado, which is also attacked by the complex in Israel, as well as macadamia, pecan, peach, orange and grapevine.

It is hard to predict what the beetle and fungus will do in South Africa – on crops such as avocado, or on native trees. Researchers at FABI are working towards a better understanding of the distribution and host range of this insect in South Africa, and investigating potential management options.

The beetle and fungus have not been reported in commercial forestry trees in South Africa, but scientists are not ruling out the possibility that plantation trees could be affected.

An Ambrosia Beetle Working Group was formed at a meeting between FABI researchers, DAFF and Johannesburg Cityparks Officials, and other interested parties. The purpose of this group is to co-ordinate research efforts, monitor and consolidate data on the spread of the beetle and host tree reports in the country, investigate possible control strategies, and advise government bodies, industry, and the public on treatment of infested trees and wood.