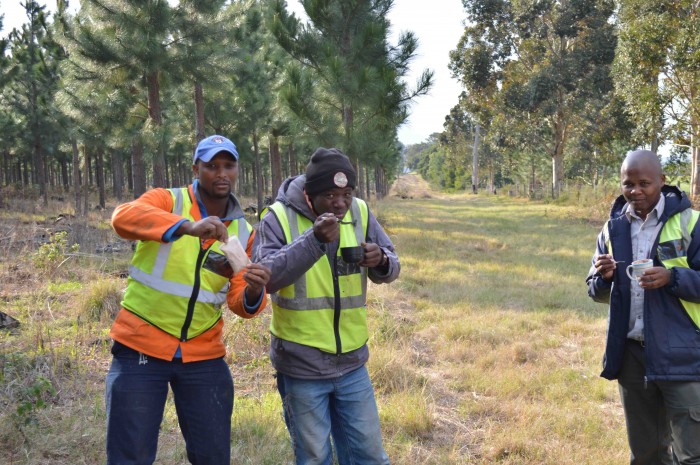 Cape Pine workers prepare to eat their daily nutritional supplement. Researchers found that the daily supplement improved the general health and productivity of the workforce.

It has been argued over the last 20 years that fatigue and injuries in forestry are predominantly caused by the tremendous physiological load associated with the job requirements. The extensive energy output required for tasks such as felling, cross cutting, de-branching, pitting and planting are at odds with the nutritionally poor diet of typical rural South African harvesting and silviculture workers. This nutritional shortfall can contribute to fatigue related injury and under-performance among the workers and affect production.

Recognising this constraint, Cape Pine Investment Holdings (Cape Pine), a Global Environment Fund (GEF) portfolio company, based in the Western and Eastern Cape Province, explored the idea of developing a long-term nutritional intervention program for workers at Cape Pine. Nutritional supplementation has been used effectively in several other industries and by some forestry companies in South Africa, to increase worker health and productivity and to reduce time lost to illness and absenteeism. However Cape Pine wanted to find ways to implement a program that was based on a scientific study of the results of this intervention. The program also needed to be cost effective and easy to implement, with minimum disruption to staff.

In order to objectively verify the benefits of a nutritional supplementation program, GEF and Cape Pine designed and conducted a five-month study, partly funded by DEG and led by Dr. Elizabeth Gummerson, a Research Fellow of the Centre for Social Science Research at the University of Cape Town, to objectively evaluate the impact of providing a daily nutritionally fortified breakfast to harvesting workers. Twenty-four harvesting teams (own operations as well as contractor operations) took part in the study and researchers collected interview data from 386 respondents. Of the 386 respondents, 165 were active participants for the entire length of the study.

The core intervention as part of this nutritional supplementation program was the introduction of a regular and nutritious meal into the harvesting workers diet. Harvesting workers were provided with a free 50g serving of nutritionally fortified breakfast porridge at the field site every morning. The porridge was selected based on its nutritional value and ease of preparation at the harvesting sites. It was simply provided in a 50g sachet that was mixed with water to make either a porridge or shake, which was consumed during the first work break of the morning or before work commenced for the day.

A longitudinal field survey was then conducted to collect comparable measures of employees’ health, wellbeing and job satisfaction at two points in time, once before the supplement was introduced and once after the nutritional supplementation program had been provided for a five month period. This data was then combined with Cape Pine’s own data on productivity and absenteeism for the 24 teams and the measures were compared to see if the nutritional intervention resulted in any improvements in the harvesting workers health, productivity or job satisfaction.

The study found that there was a measureable and statistically significant improvement in the harvesting workers health status after the implementation of the program. The percentage of harvesting workers reporting recent (non-chronic) illness fell by nine percentage points from 54% to 45%. A non chronic, or symptomatic illness is when the symptoms of a disease or illness are present. Sometimes a patient can be symptomatic but not have a disease, and sometimes this can point to the start of an illness (e.g. headache, cough diarrhea, runny nose). The percentage of harvesting workers reporting chronic illness fell by 5.5 percentage points, from 13.6% to 8.1%. Chronic illness is a health condition or disease that is persistent or otherwise long lasting in its effects. The term is usually applied when the course of the disease lasts for more than three month (e.g. diabetes, high blood pressure and asthma). In addition to these illness benefits, the study also found that there was a 25-percentage point increase in the number of harvesting workers reporting good health.  Workers felt healthier.

Other important and measurable results of the study found significant morale improvements as a result of the nutritional intervention. The number of harvesting workers who felt that the employer was “fair and reasonable” in its dealing with them increased 11 percentage points from 60.8% to 71.8%. The number of harvesting workers who were scored as “dissatisfied” or “very dissatisfied” on the employee satisfaction scale decreased by 20 percentage points among Cape Pine employees and nine percentage points among contractor employees over the period of the intervention.

Looking at the diet of harvesting workers, the study found that harvesting workers are currently performing demanding physical work while consuming approximately 1 500 fewer calories per day than is recommended for men of their age group. A simple 200 calorie nutritionally fortified supplement, as provided during the study, resulted in a measurable improvement in employee health, wellbeing, productivity and morale. Nutritional supplementation proved to be highly effective. Given the size of the average nutritional deficit, the positive effect of a relatively small daily increase was remarkable.

With such positive results, Cape Pine has looked at ways to expand the project beyond harvesting staff. The company has now also included silviculture, road management and infrastructure workers into the nutritional intervention scheme. A nutritionally fortified breakfast is currently provided free to approximately 400 Cape Pine workers on a daily basis.   It was also realized that increasing the calorie and nutrient intake of the scheme would yield even better results and therefore the amount of supplement has been increased from 50g to 75g per day per person.

As forestry continually looks at ways to improve production and to decrease health and safety risks, the adoption of a nutritional supplementation system is seen as a cost effective way to move towards improvement. All forestry companies should consider the benefits of such a program not only to workers, but to forestry operations. 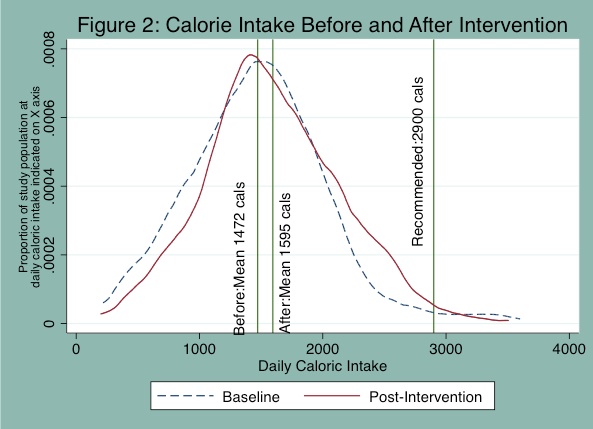 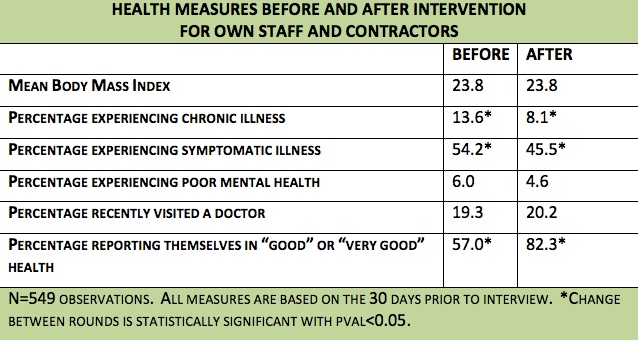