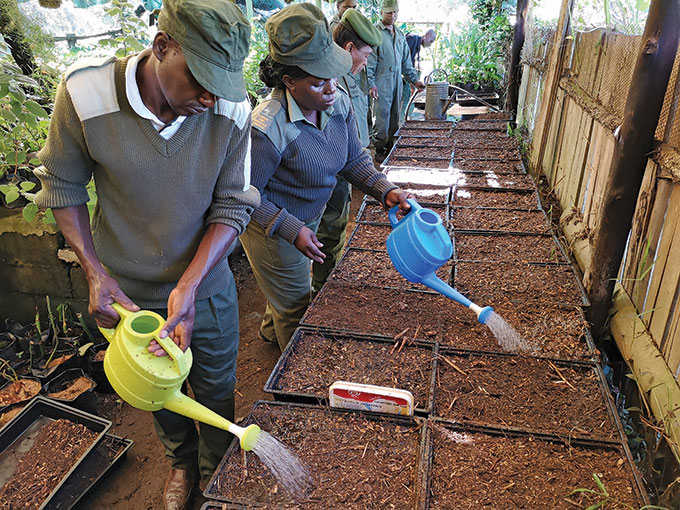 Zimbabwe Parks rangers at Vumba Botanical Gardens, near Mutare, planting Warburgia seeds. Sappi sponsored a trip for project team members to take seed to Zimbabwe with the aim of propagating plants there and building up the Warburgia population in Zim … an international plant conservation effort.

Warburgia salutaris, commonly known as the pepper-bark tree or ‘isibhaha’ in isiZulu, is a highly prized muti plant that the indigenous people of southern Africa use to treat numerous common ailments including colds and flu. The bark of the tree, which contains powerful healing properties, is in demand at traditional muti markets and has been heavily harvested in the wild.

The tree is slow growing, is a challenge to grow from both seed and cuttings, and when under stress in the wild holds back on seed production. As a result it has become increasingly scarce and is now considered highly endangered. It is formally protected under SA legislation in the revised National Forests Act (2012) and the National Environmental Management Biodiversity Act (2004).

An initiative launched in 2011 to propagate the trees and distribute them to communities living around the Kruger National Park in an attempt to take the pressure off the few remaining wild trees still growing in the park, has met with considerable success. Sappi came on board in 2014 with an initial donation, and then using its tree breeding and production expertise to start propagating pepper-bark trees from cuttings for distribution to rural communities. 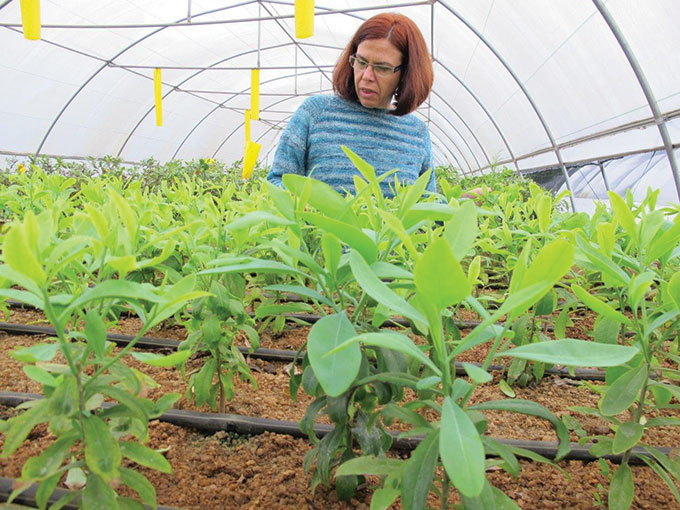 This project has been a huge success and by 2018 over 30 000 pepper-bark seedlings and cuttings had been distributed. Traditional healers and community representatives have attended workshops on planting, tending and sustainable harvesting of muti from the trees.

Gene banks and seed orchards have been established within the working group partnership, and assistance has been extended to Swazi and Zimbabwe conservation authorities to help them increase the number of trees growing in their countries. Apparently there is only one pepper-bark tree left in Zimbabwe – in the botanical gardens in Harare.

The tree prefers cool, south facing slopes in krantzes and kloofs, and grew extensively across southern Africa from Eastern Cape through Swaziland, Zimbabwe and Malawi. The first warning that Warburgia salutaris was under threat came way back in 1926. In 1996 it was the SA Tree of the Year.

The Sappi Shaw Research Centre has been working on seed propagation and the production of cuttings. The Agricultural Research Centre and SANBI have also contributed to research on improved growth methods for propagation, determining the impact of insect pests such as the marula fly which infects developing fruit and damages seeds and growing plants from seeds.

According to Tim Neary, research has indicated that many pepper-bark trees left in the wild populations are clones because when the trees are damaged or debarked they responded by coppicing or suckering – potentially growing an entirely new tree. 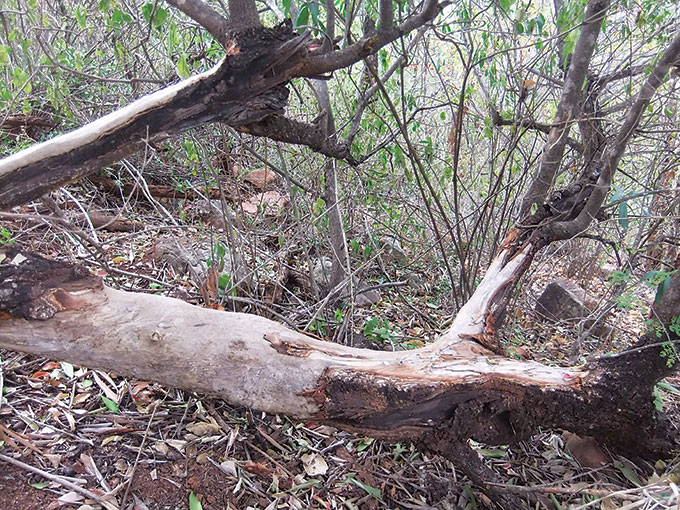 This pepper-bark tree has been heavily harvested in Kruger and has not survived.

Expanding the project
With Sappi’s involvement the project has expanded to KwaZulu-Natal and the Eastern Cape with pepper-bark saplings distributed to rural communities, including Sappi Khulisa small-scale tree farmers. Efforts are also being made to propagate seedlings from a population of trees growing on a private farm in the Eston area.

Commented Sappi’s Environmental Manager, Dave Everard: “Sappi is in the business of growing trees, and so we were thrilled to get the opportunity to use our technical skills in propagation to crack the production of cuttings in this endangered species. This has resulted in thousands of new plants being available for distribution to communities and the people who need it most for primary health care.

“Sappi is also a forestry based company and so contributing to the conservation of this very valuable tree species is something we do with pride and hope that planting this species in rural communities will take the pressure off the wild populations. Providing these trees to our Khulisa growers further strengthens the relationship we have with our growers. They get a valuable medicinal tree and get to contribute to conservation in a very practical way.”

“We are not saving trees and returning it to the wild – these are nursery grown trees supplied to communities at no cost that will serve to protect the remaining trees still growing in the wild,” added Tim. “Furthermore, every cent raised by the project goes directly to project costs, and no human costs.”

He said that the key to the success of the project is that no money changes hands. Communities get trees at no cost/ free of charge and in return pledge to nurture and protect them. 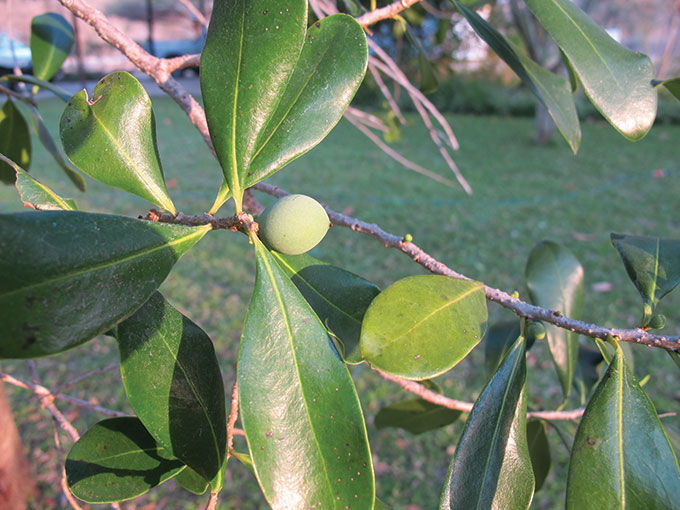 Breakthrough
A major breakthrough for the project has been the discovery that the medicinal properties so highly prized in the bark, are also abundant in the twigs and leaves. Thus the twigs and leaves of trees planted out in the field can be harvested within four years – much earlier than would be the case for bark harvesting which can only be done on an adult tree. This ensures that the trees can be harvested sustainably, providing health benefits and economic opportunities for traditional healers and muti traders.

A key aspect of the project is in education. Workshops are held with traditional healers and community members to inform them about growing and nurturing the trees, harvesting them sustainably and utilising the muti. Information tools have been developed to promote this information.

Following the success of saving the W. salutaris, DAFF has approached the project team with a request to consider launching a similar project to save another highly threatened species that is also a target for muti traders – Prunus africana. 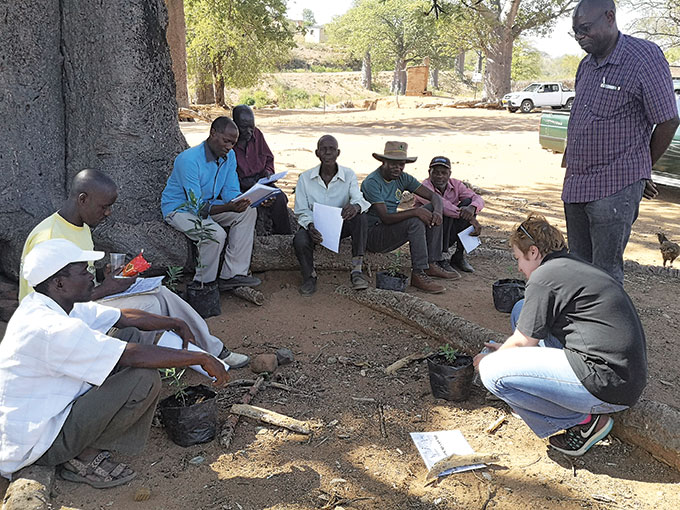 Traditional healers and community members from Tanganda Halt in eastern Zimbabwe receive Warburgia saplings from the South African project team. The community members were so grateful and excited to be receiving plants and also learning about sustainable harvesting. The Pepper-bark used to occur there but has been harvested to extinction.