Slow but steady as forestry takes root in E Cape 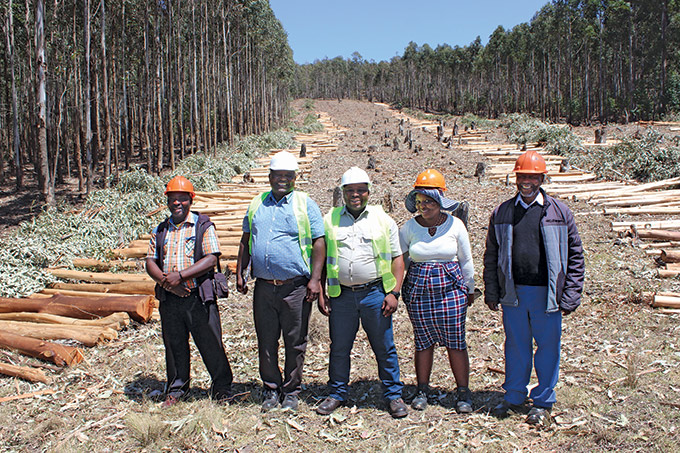 The potential for forestry to bring sustainable jobs and economic development to remote rural areas of the Eastern Cape (former Transkei) has been demonstrated with the success of several pioneering community forestry projects.

It is one of the poorest regions in South Africa characterised by a lack of infrastructure and high unemployment, with economic activity in rural areas dominated by subsistence agriculture. A number of agricultural projects were set up in the 1970s and 1980s with varied success, including forestry planted by the Government Forestry Department.

However it is chiefly through the efforts of the Eastern Cape Rural Development Agency (ECRDA) and the corporate sector that forestry has gained a foothold in the region, creating sustainable jobs and building a platform for future development.

The complex dynamics of community politics and a lack of urgency and support from government has meant that the Transkei community forestry projects have unlocked just a fraction of the 100 000 ha identified as suitable for afforestation in the Eastern Cape by the Department of Agriculture Forestry & Fisheries way back in 2007.

Even so the projects that have got off the ground have established a platform for future expansion and a model for the development of new projects by demonstrating both to the communities themselves as well as to private and public sector stakeholders that forestry can play a catalytic role in rural development in the region.

Supported by the ECRDA and corporate growers like Sappi and PG Bison, these projects are being run by local people drawn from stakeholder communities. They have established viable, sustainable businesses and at least two of these projects are demonstrating excellence in forestry operations comparable to the best corporate owned and managed plantations in South Africa. 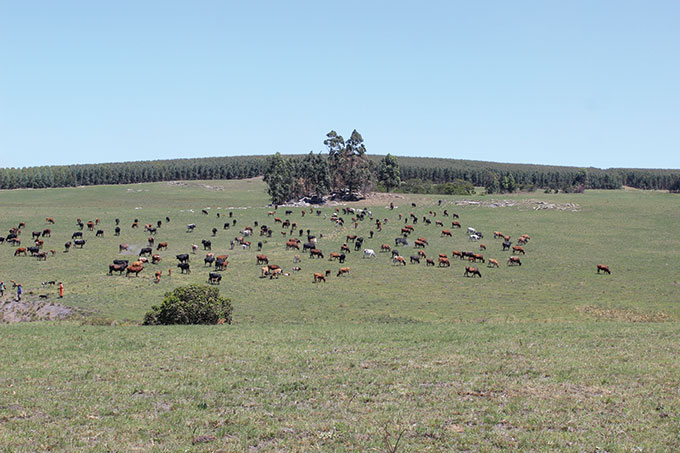 Community cattle grazing on the grasslands alongside the Mkhambathi plantation.

The Mkhambathi project has consistently scored above 90% in Sappi’s silviculture quality audits which are performed annually across the company’s forestry operations, putting it on par with top performing company owned and operated plantations. These audits assess key aspects of establishment, including soil prep, pitting, planting, stocking, tree survival and weeding.

The Sinawo project, which has been scoring in the 80% range for the past few years, has this year also moved into the 90s in the annual Sappi silviculture quality audit.

Every forester knows that good silviculture is the basis of good forestry, so this bodes well for the future.
These high standards are in no small part due to the efforts and constant vigilance of Sappi’s foresters infield who are assigned full-time to assist these community forestry operations on a daily basis.

So too the ECRDA forestry team which plays a big role in supporting the financial administration of the forestry businesses, assists with the management of community relations and plays an oversight role in the community’s dealings with their corporate partners and other stakeholders.

ECRDA initially identified eight projects with a potential scale of 15 800 ha. Of these, six are at various stages of implementation. Significantly ECRDA was successful in securing a three-year Jobs Fund grant of R83 million in 2013, with matched funding of R15 m (ECRDA), R8 m (ECDC) and R7 m committed from timber sales from the projects themselves.

To date R158 m funding has been invested in the projects. This excludes the investment by Sappi which includes soft loans (recovered from timber sales), sponsored seedlings, technical support and subsidised transport costs for projects situated further than 200 kms from Sappi-Saiccor.

During the peak implementation phase in 2016 a total of 1 100 community members were employed through the six projects. R92m was paid as remuneration to the community project workers and management over the past nine years.

According to head of Forestry at ECRDA, Nkosi Quvile, ECRDA plans to expand the existing community forestry projects, and to further add value to the provincial economy by developing processing facilities in the region. 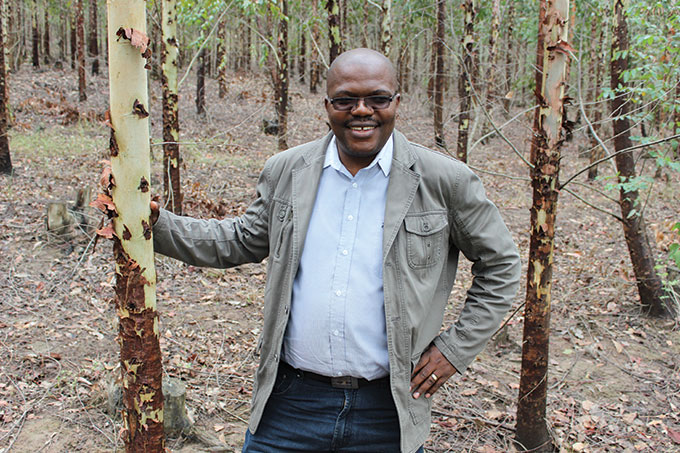 “There is 4 400 ha of land that has been planted in these projects since their inception in 2013 and there is still more than 5 000 ha which needs to be planted in the existing community forestry enterprises, requiring investment in excess of R72 million,” said Nkosi. “However, the ECRDA has recognised that the bulk of the timber is transported out of the Province for processing or value addition … thus ECRDA plans to explore, facilitate and establish two processing facilities i.e. pole treating plants or mobile chipping plants.

“The funding will come from a combination of government grants and private sector investment. For example, we will be attending African Agri-Investment Indaba being held in Cape Town in November, where we will be presenting an investment proposal for Mkhambathi Forestry Enterprise to lure national and international investors interested in expanding the project.”

The potential to incorporate adjacent state forestry plantations (B and C category DEFF plantations) into the community forestry enterprises has been identified as an opportunity to achieve optimum enterprise scale. But little progress has been made in this regard.

“It is ideal that these community forestry enterprises be integrated to adjacent DEFF plantations to take advantage of economies of scale in order to bolster profitability, but the legislative processes with DEFF are delaying the integration. For example, Izinini Forestry Enterprise could have been integrated with the DEFF Bizana plantation a long time ago, but the internal DEFF processes are impeding the integration,” said Nkosi.

“Although there are high prospects of success of the community forestry initiatives, there are land tenure challenges taking centre stage … which stalls the growth of the projects. For example unresolved issues of ex-sugar cane growers keeps on coming and frustrates the implementation of the Sinawo forestry project.”

He said that government intervention is required, especially from Department of Agriculture, Rural Development and Land Reform (the custodian of State land) to address these challenges.

Here is a list of forestry projects, including projects initiated by Sappi and ECRDA:

Mkhambathi
Mkhambathi is situated just inland from the coast on the road between Holy Cross and the Mkhambathi Nature Reserve.

Sappi has partnered with the Mkhambathi Land Trust, providing low interest loans, sponsored seedlings, technical support and a market for their timber, and subsidises the long haul transport. Mkhambathi is currently 290 km by road from Sappi Saiccor, a distance that is expected to be halved when the new N2 road through Transkei is completed. 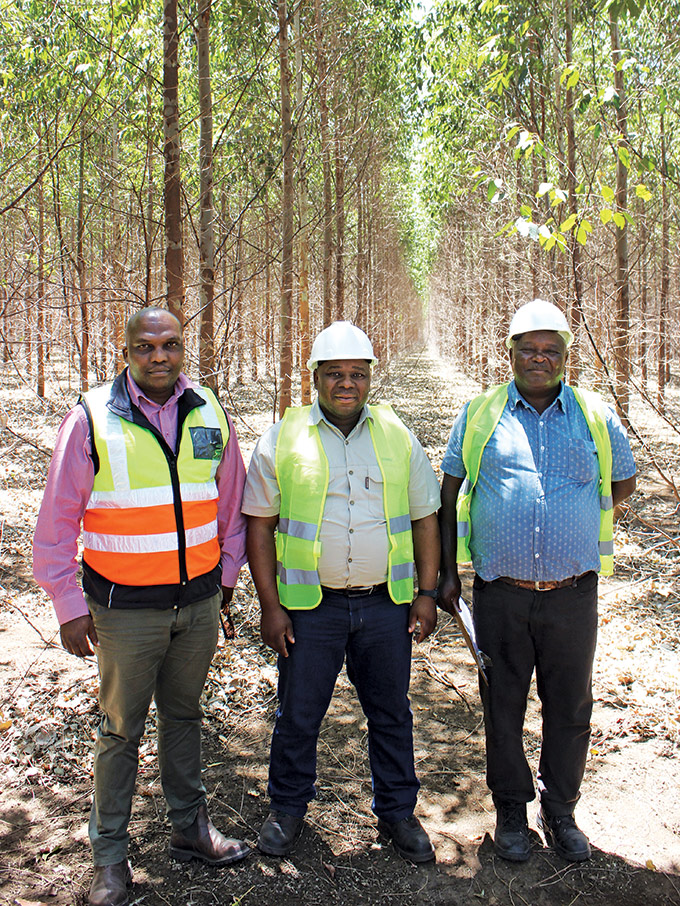 The ECRDA forestry team has been pivotal in setting up this project, providing on-going oversight and admin support.

The Mkhambathi Land Trust, which represents six villages, was established by the Department of Rural Development & Land Reform (DRDLR) and successfully claimed 17 000 ha of land, including the 6 000 ha Mkhambathi Nature Reserve. The land also included 700 ha of unmanaged gum planted in the 1970s and 1980s.

Rehabilitation of the old plantation commenced in 2011, and trees planted during this period are now being harvested. They are currently harvesting 500 tons per month, and aim to increase this to 1000 tons/month to meet their target. All the timber is sold to Sappi Saiccor.

All forestry operations at Mkhambathi are performed by community members employed by the Trust and managed by a Forestry sub-committee. They have mostly planted E. dunnii, though recent plantings of GxU hybrids are showing excellent growth.

Total area planted to date is 890 ha. A water-use licence has been obtained for establishing a further 1 250 ha. Peak employment was 179 – current employment is 48 people sourced from stakeholder communities.

Sinawo
The Sinawo project is located just 15 km from Port Edward on the Bizana road – 135 kms from the Sappi-Saiccor mill. The Sinawo CPA was established by DRDLR after a successful land claim, and represents three villages. The land includes 1 350 ha of E. grandis planted by North Mpondoland Sugar during the 1970s and 80s on the poorer soils (sugar was planted on the prime land, which has subsequently been abandoned). 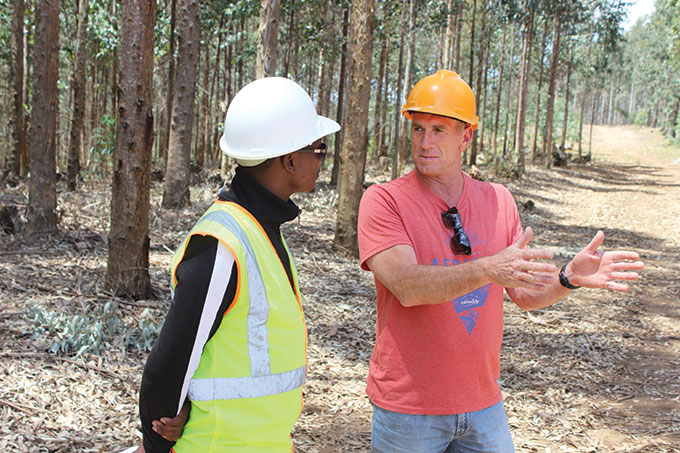 A strategic partnership with Sappi plus on-going support from ECRDA have been instrumental in helping the Sinawo CPA to get the project off the ground.

Rehabilitation of the old compartments commenced in 2011. Revenue derived from harvesting of the rehabilitated plantations has sustained the enterprise ever since. The DRDLR has to date not released any development funding from the promised Settlement Grant.

Total area planted to date is 1 750 ha (mainly E. dunnii and GU clones). A water-use licence for the expansion of a further 1 250 ha has been obtained, although the CPA has reduced the area to be planted to 700 ha. Total land area of the claim is 10 000 ha.

Peak employment was at 321, and currently 140 people are employed.

The CPA has used money from timber sales to establish 10 ha of vegetables under irrigation.
An ongoing dispute and contestation by segments of the Sinawo community, who were affected by forced removals and economic activities on the sugar farm, are highly disruptive, and incidents of illegal harvesting are taking place.

Despite these setbacks the Sinawo forestry team has impressed the Sappi silviculture auditors who scored the operation above 90%, which is on par with many Sappi owned and operated plantations. Their harvesting operations also impressed the SA Forestry team during a recent visit.

As with the other forestry projects in the region all forestry work is done manually, even loading. 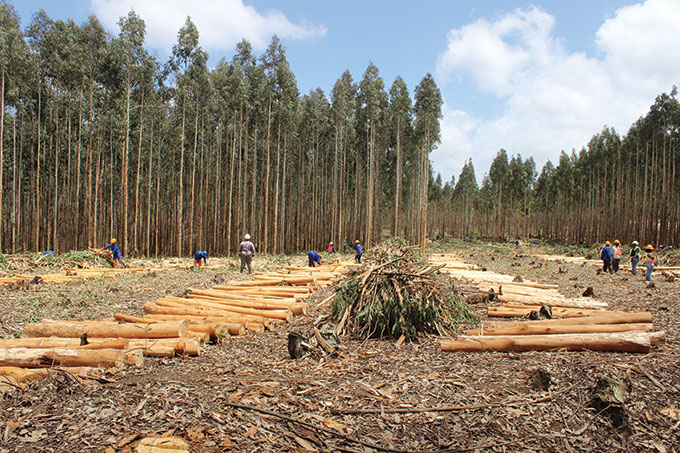 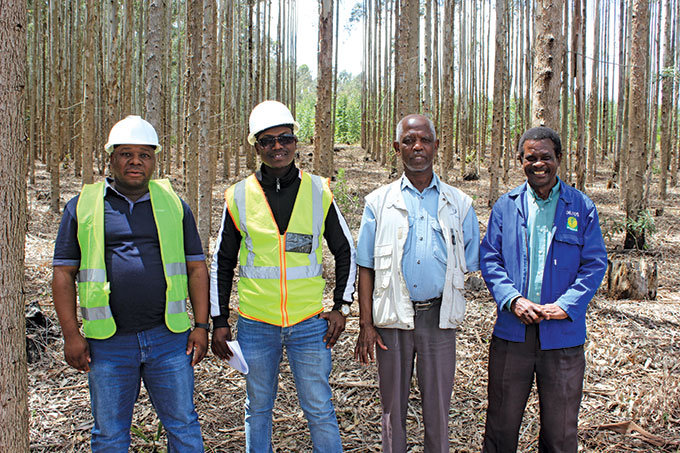 Izinini
The Izinini CPA, representing three villages, was established by DRDLR during the land claims process, which includes the DEFF Bizana plantation (250 ha) and a wattle jungle (550 ha) plus adjacent open area suitable for forestry.

Sappi and ECRDA provided the CPA with support to rehabilitate the wattle jungle and initiate efforts to secure access to the DEFF plantation to enable the project to achieve viable scale, but these efforts have not been successful to date.

Operations commenced in 2013, total area planted to date is 525 ha, including E. dunnii and GxU. Peak employment was 268, and currently 12.

Sixhotyeni
Situated 45 kms from PG Bison’s board plant in Ugie. The land was identified as suitable for forestry development by NE Cape Forests due to the proximity of DEFF’s Ntywenka plantation and good location and soils. A water-use licence has been obtained by the Sixhotyeni Community Trust and work started in 2013 with Jobs Fund grant and technical support provided by PG Bison. 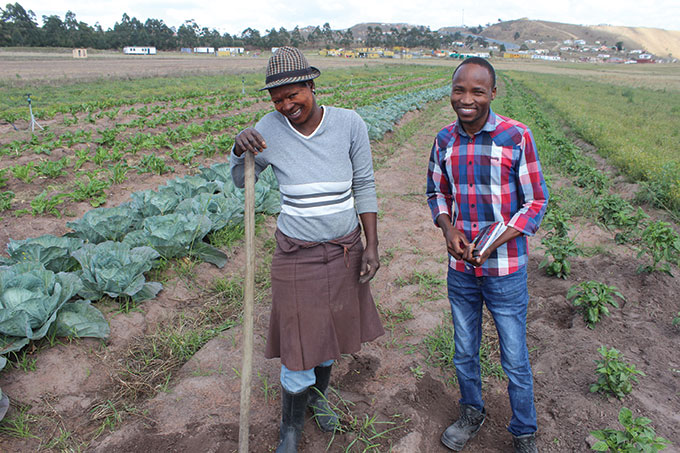 The Sinawo CPA has used revenue from the forestry to start their own vegetable project, managed by Sonwabiso Tsutsha (right).

Gqukunqa
Located 75 kms from PG Bison’s board plant at Ugie, the area was identified as suitable for forestry by NE Cape Forests. The Gqukunqa Community Trust was established in 2003 and licence to plant was granted in 2013 and work started at the end of that year, with technical assistance from PG Bison.

Harvesting is scheduled to commence soon.

Lusikisiki
The Lusikisiki project, initiated by Sappi, involves a number of individuals growing trees on small plots on communal land. Currently there are 1 000 ha planted, and harvesting started last year. The growers have organised themselves into a co-op in order to work together to grow and market their timber.

The Sappi Khulisa team provides sponsored seedlings, technical assistance and loan funding to the growers, and provides a market for the timber.

ECRDA provided finance to help growers establish their plantations during the Jobs Fund period, which reduced their reliance on the loan funding from Sappi.

Pelepele
Sappi played a key role in setting up this project with small-scale individual growers near the town of Bizana. There are 67 growers with a total of 77 ha established back in 2000.

Flagstaff & Maqhubini
These projects were identified as having potential for new forestry development, but have not reached implementation stage due to internal community issues not conducive for long-term investment in forestry. 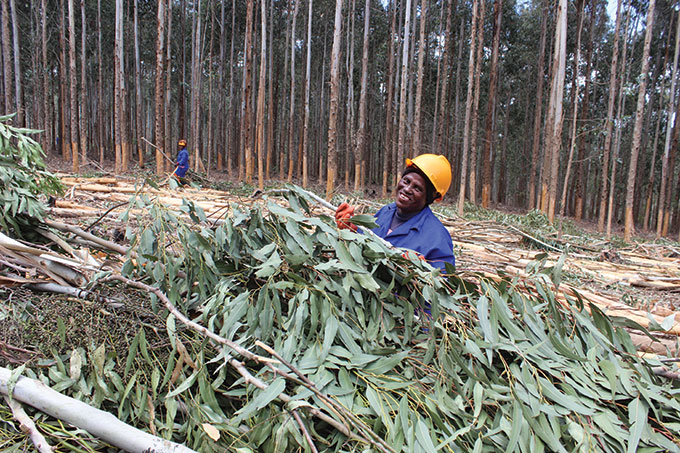 All harvesting work is done by hand. 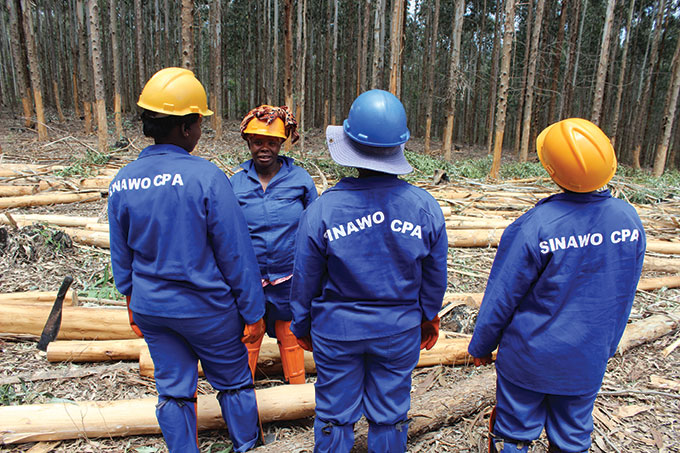 Related article: Forestry the backbone of development in rural KZN