Assessing the recovery of plantation land after clearfelling 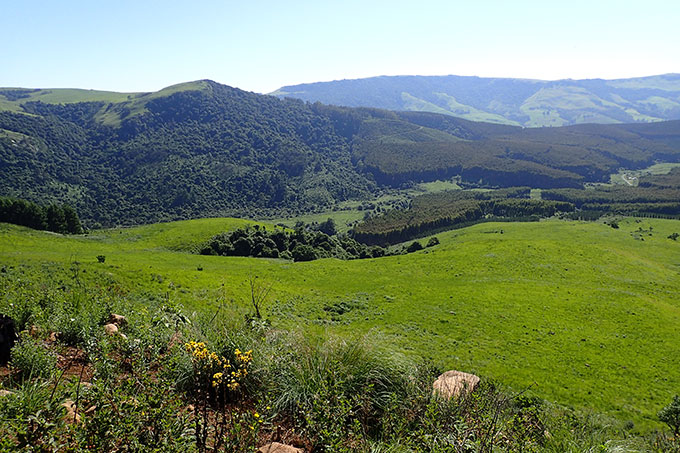 Byrne Valley, a forestry estate in the KZN midlands, consists of a mosaic of different biotopes.

The aim of this study was to assess the long-term recovery of grassland about ten years after felling a commercial timber block to establish a corridor between two grassland patches, both set in a commercial forestry matrix. The project was part of the Mondi Ecological Network Programme, a research programme focused on biodiversity conservation in timber production landscapes (Samways and Pryke, 2016). Our job was to study the recovery of biodiversity in these cleared plantation blocks, specifically to establish whether they become more similar to the natural forests, natural grasslands, or other transformed biotope types in the surrounding landscape. Since ‘biodiversity’ is such a broad term, we decided it would be best to focus on two main taxa: insects and plants. The insect study was undertaken by Carly Vlotman, and the plant study by Amber Smith.

Why is this study important?
Ecological restoration is ‘the process of assisting the recovery of an ecosystem that has been degraded, damaged or destroyed’ (www.ser-rrc.org). In timber production landscapes, there are vast areas of wetland vegetation recovering after commercial forestry compartments were removed, largely as part of the national wetland delineation programme aimed at protecting scarce freshwater resources. Although recovering areas remain distinct from natural vegetation, there is healthy recovery of wetlands, particularly for insect diversity (Eckert et al., 2019).

However, our study site was special, because it was about the recovery of dryland biodiversity in a newly-created corridor aimed at improving connectivity in the landscape. These corridor networks make a real contribution to biodiversity conservation in timber production landscapes, when designed and managed well (Pryke and Samways, 2012b). In addition, data collected in this study would form the baseline of a long-term monitoring study of biodiversity recovery at this site. 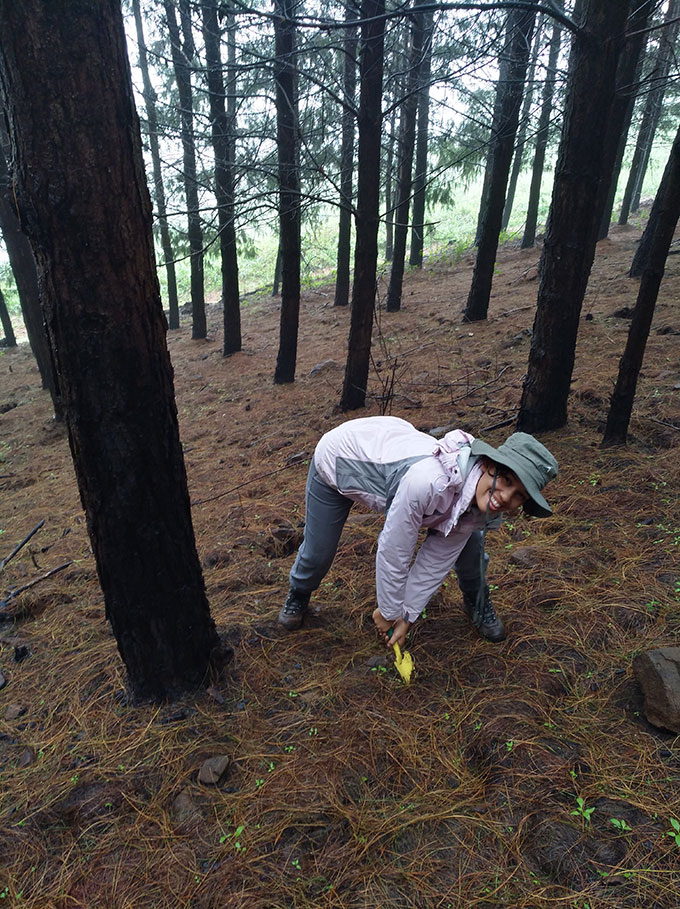 Byrne Valley consists of a range of biotopes. There is a recovering pine block in the foreground, natural grassland with an indigenous forest clump in the middle, and commercial pine and eucalypt compartments in the distance.

The aim of the study was to determine the restoration pathway of recovering biotopes (see illustration below). Do insect assemblages in recovering biotopes more closely resemble those in natural or transformed biotopes after 10 years? Which of the seven biotope types do they resemble most? And which environmental conditions drive the composition of insect assemblages? We collected insects and recorded environmental variables at six sites per biotope, which gave us a total of 42 sites. The specific insect groups were mostly ground-living arthropods that we caught with pitfall traps, but also grasshoppers and butterflies which were caught with sweep nets. 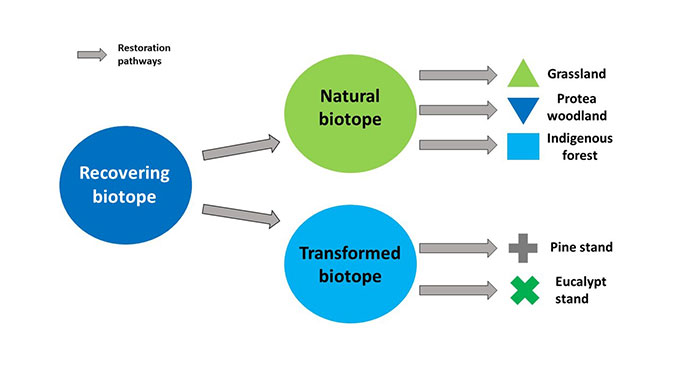 What did we find?
It is already known that commercial forestry compartments host a lower species richness and abundance when compared to natural biotope types (Pryke and Samways, 2012a; Eckert et al., 2019). Our study showed similar findings where both insect abundance and species richness decreased with an increase in the level of disturbance (i.e. natural > recovering > transformed). However, the graph below shows that the cleared timber blocks are already recovering, even just in terms of sheer numbers. 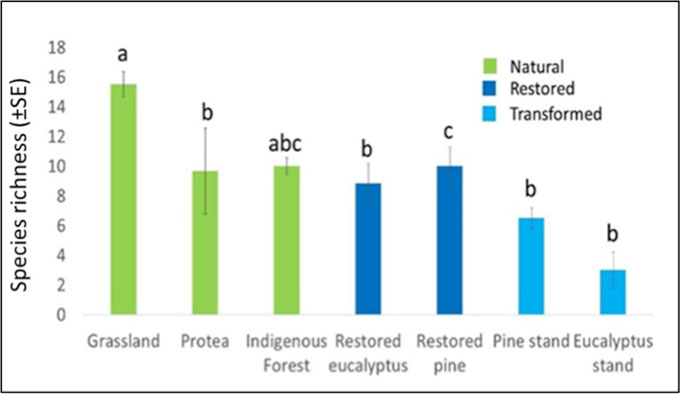 Average (±SE) species richness of all taxa captured in the different biotopes. Here, significant differences of species richness between the biotopes is represented using letters above each bar, and are based on Tukey’s post-hoc tests with a significance level of p < 0.05.

We then analysed the insect assemblage structures of the different biotopes, as this would tell us what the species ‘make-up’ is within each biotope. The graph below shows distinct groups of insects in the transformed and natural biotopes. Here, more similar biotopes would clump closer together, representing that similar biotopes host similar insect assemblages. The recovering biotopes were more similar to the transformed biotopes. However, the insect assemblages of some of the restored sites overlapped with those of natural biotopes, which shows a clear movement of the recovering sites towards a more natural state. Furthermore, recovering sites were more similar to the grassland and protea woodland (late successional grassland) biotopes, and not indigenous forest, which suggests that the current restoration pathway is towards a grassland state. Interestingly, recovering pine sites appear to progress faster than the recovering eucalypt sites. Dense invasion by American Bramble (Rubus cuneifolius) at the recovering eucalypt sites might contribute to their slower recovery (Eckert et al., 2019). Alternatively, the intensity of legacy effects of pine and eucalyptus plantations may differ. 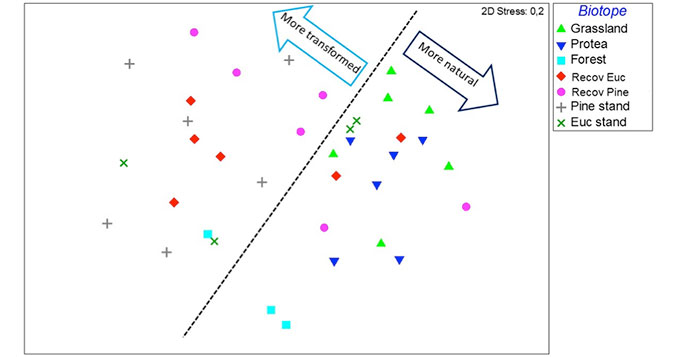 A multidimensional scaling graph showing the insect assemblage structure across the seven biotopes. Sites that group more closely together have more similar insect assemblages. Here, we saw a clear separation of transformed and natural biotopes, which separated to either side of the dotted line.

Finally, we analysed which environmental variables helped to shape the insect assemblages. We found that the transformed pine and eucalypt compartments showed completely different insect assemblages compared to all other biotopes, a difference ascribed to the lack of an understorey vegetation layer. A high proportion of vegetation cover in the recovering and natural biotopes corresponded with an increase in ground-living insects. Additionally, ground-living insect abundance in recovering eucalypt sites was unexpectedly high. Overall, we concluded that the regrowth of vegetation cover in the recovering biotopes is a major driver of insect recovery, as it improves the habitat conditions and reduces contrast with neighbouring grassy sites. 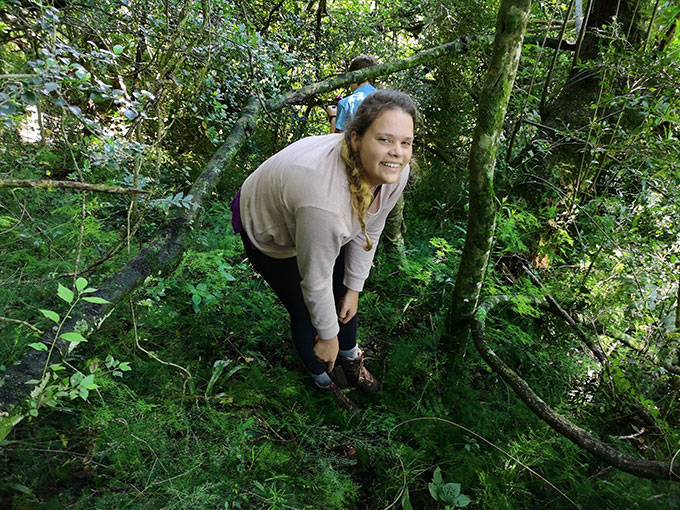 Management implications
The results of this study are encouraging, since they show that felled plantations have potential to recover towards a natural state, emphasising the value of restoration programmes. However, the recovering biotopes still face a number of concerns that should be addressed by management. Firstly, the invasion of bramble is negatively impacting recovery of biodiversity, and should be urgently controlled. Secondly, foresters need to actively maintain burning regimes so that recovering biotopes can remain on their current pathway towards a grassland state. Thirdly, exposed soil in recovering sites need to be seeded with indigenous grasses to prevent soil erosion. Lastly, it is imperative that regular biodiversity surveys are conducted, and that these inform adaptive management strategies at these recovering sites. Acting on these management recommendations can help this inter-connected corridor network better conserve biodiversity in this heterogeneous landscape.