Another natural enemy of Leptocybe invasa found in South Africa 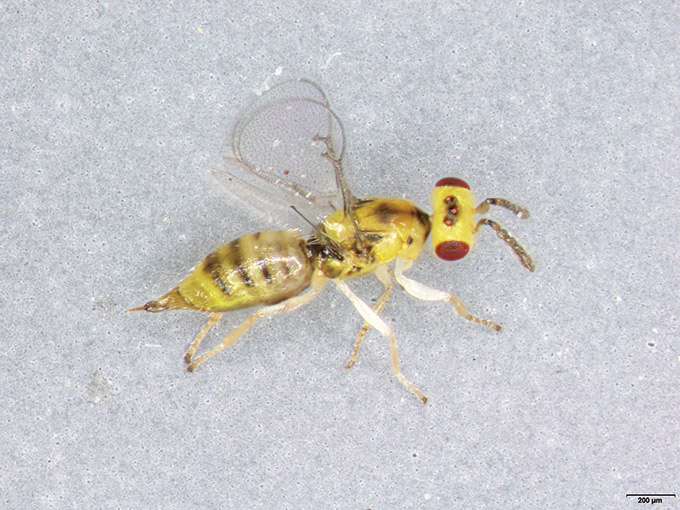 Quadrastichus mendeli: this small wasp is a natural enemy of L.invasa and may help to control its spread.

Researchers at the Forestry and Agricultural Biotechnology Institute (FABI) at the University of Pretoria, have used morphological traits and sequence data to confirm the presence of a minute wasp, Quadrastichus mendeli, in South Africa. This wasp is a known natural enemy of the blue gum chalcid, Leptocybe invasa, a serious pest of eucalypts in South Africa and around the world.

The pest, L. invasa, inserts its eggs into the new growth of leaves, petioles and stems of Eucalyptus. As the tree grows and the insect develops, the attacked area deforms and this deformed mass of tissue is called a gall. Each gall has multiple chambers and each chamber houses a developing insect. The plant tissue of the galls provides nutrition to the developing insects, pulling resources from the tree. As a result, at high enough infestations, trees will be stunted or even killed. Losses from this insect can be severe, resulting in the development of various management strategies, including the selection and deployment of resistant eucalypt genotypes and the introduction of a biological control agent, Selitrichodes neseri. 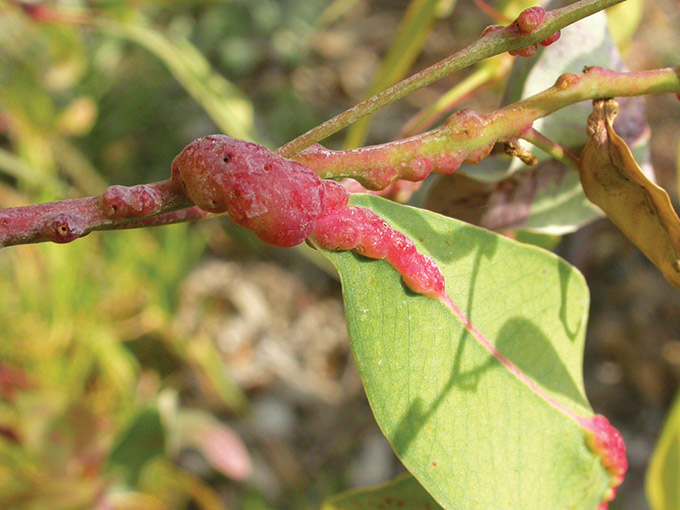 Galls on a eucalypt attacked by L. invasa.

The detection of a new natural enemy in South Africa is good news as it is hoped that this insect will contribute to the management of the pest. This parasitoid wasp is about 1 mm long and attacks the developing L. invasa larvae. It is indigenous to Australia, but has been deliberately introduced as a biological control agent in Israel and India. Parasitism rates of up to 50% in the field and 84% in the laboratory have been reported, showing that this insect has the potential to reduce populations of the pest.

The parasitoid wasps emerged from galled material collected in March 2016 as part of routine collections for rearing and research purposes at the FABI Biocontrol Centre. This work has been made possible through Sector Innovation Funds (SIF) that were obtained by FABI from the Department of Science and Technology through Forestry South Africa (FSA), with the objective of increasing capacity for the biological control of eucalypt insect pests in South Africa. 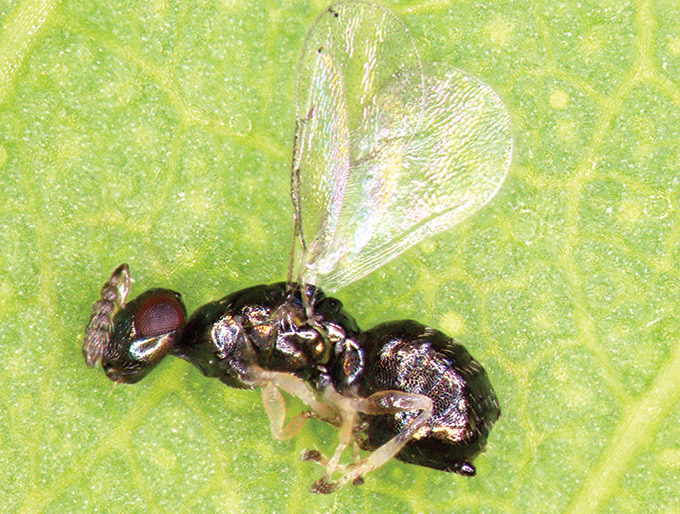 Collection of material infested with L. invasa as part of a national monitoring project will provide important information on the distribution and spread of this newly reported parasitoid. The interactions between the new parasitoid and other insects associated with the L. invasa galls, including the existing biological control agent, Selitrichodes neseri, will need to be studied.