Home » Why is an iconic South African tree dying?

Why is an iconic South African tree dying? 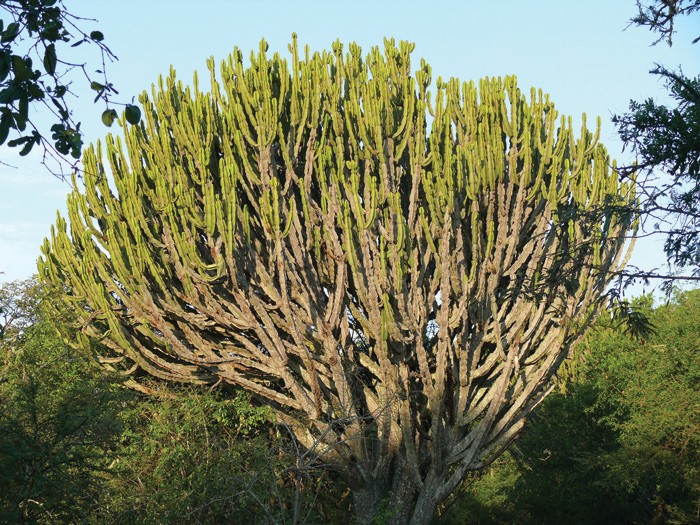 Euphorbia ingens is a native tree species to southern African savanna landscapes. This charismatic tree is distributed across the northern and eastern provinces of South Africa, as far south as KwaZulu-Natal.

Euphorbia ingens plays an important ecological role being utilized by animals (specifically giraffes and rhinos during the drier seasons of the year) and, despite its poisonous latex, by humans for fishing and medicine.

Unfortunately this majestic tree is dying off in increasingly large numbers.

The first reports of E. ingens die-offs came after 2000, from the National Game Breeding Centre in Mokopane in the Limpopo Province. The main symptoms of disease are an initial grey discoloration and rotting of the succulent branches, followed by beetle attack and tree death.

Researchers at the DST-NRF Centre of Excellence in Tree Health Biotechnology (CTHB), linked to the Forestry and Agricultural Biotechnology Institute (FABI) of the University of Pretoria, have been collecting data on possible climate and land use change (abiotic) factors in association with microbial and insect (biotic) agents in an effort to understand E. ingens die-off patterns and attempt to identify a primary cause for the deaths.

Initial pilot studies, followed by my own MSc research, showed the association of a moth, Megasis sp. (Lepidoptera: Pyralidae), ambrosia and bark beetles, and a number of fungi (including some previously unknown to science) with diseased and dying trees in the Limpopo Province. It was also found that when comparing two areas, one healthy in the North West Province and one diseased in the Limpopo Province, changes in temperature and rainfall for the period 1960-2010 revealed differences in climate, related to E. ingens mortality.

Temperature, specifically minimum temperature, was the most significant factor that increased more dramatically in the Limpopo Province where the highest levels of E. ingens mortality occurred.

During further studies, including more regions in the country, I also looked into possible changes in land use as a driving force behind the E. ingens die-offs. These investigations were conducted in 10 E. ingens populations that occur across South Africa (KwaZulu-Natal, Limpopo Province, Mpumalanga and North West). Both biotic and abiotic factors were included in the extended study. The presence of die-off factors (grey discoloration and branch rotting) as well as mortality of E. ingens trees was found to occur at all the populations investigated. None of the fungal species identified were, however, consistently associated with disease symptoms, nor are they known to be primary pathogens, but rather opportunistic causing disease to stressed hosts.

Significant differences in the level of die-off factors and mortality were found between the sites investigated. The most severely diseased populations were not specific to a particular province, suggesting the influence of locally induced abiotic stressors on E. ingens health. Analyses of temperature and precipitation at all of the sites investigated revealed that a changing climate might not be the only abiotic factor triggering E. ingens die-offs. 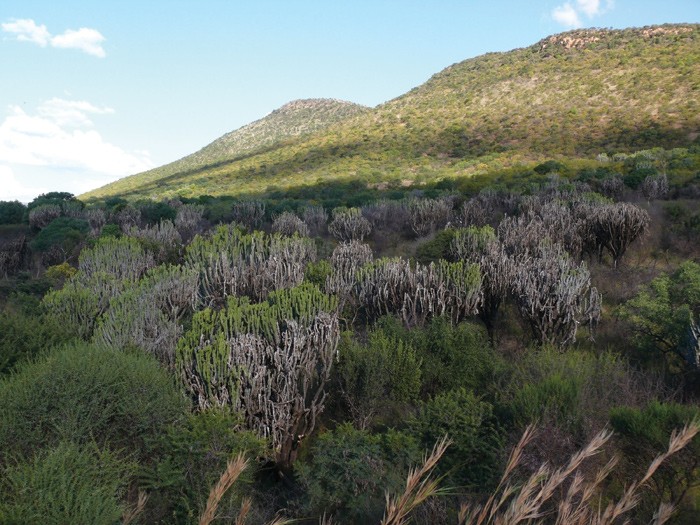 If appropriate land management is not applied, E. ingens will continue to die-off and may cease to exist in the savanna landscape of South Africa.