Plans to protect the Garden Route from fire taking shape 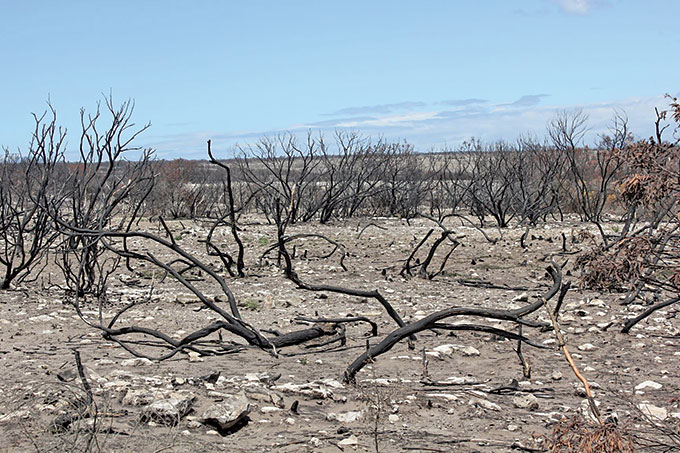 The Garden Route fires left devastation in their wake.

Fire services scarcely had time to regroup after the 2017 Knysna fires, when the Garden Route was again plagued by climate change induced severe drought conditions and a heat wave in late October 2018 which culminated in disastrous runaway fires. These fires burnt about 90 000 ha of mainly old mountain veld between the Jonkersberg Plantation west of George and the Prince Alfred’s Pass between Knysna and Avontuur in the east. At the same time runaway fires in the Tsitsikamma occurred causing considerable damage to MTO Forestry’s plantations.

A positive spin-off from the 2018 fire was a good clean burn of most of the Outeniqua mountain range, which contained 30-40 year old senescent fynbos. This has given fire managers some breathing space to prepare for future fires. The idea is to conduct controlled block burns on patches of mountain veld that didn’t burn in the wildfire. Thereafter, and before the vegetation develops into a fire hazard again, serious attention must be given to doing strategic controlled burns to reduce fuel loads.

Another very positive development is that, at long last, DAFF has appeared on the scene.

The majority of the State plantations leased to MTO on a 20 year exit lease agreement in the southern Cape were burnt down. Many of the areas west of Wilderness earmarked for conservation were meant to have been transferred to CapeNature, but have been lying fallow and have been overrun by jungles of exotics and fynbos presenting a serious fire hazard.

Others are part of the exit reversal and have been naturally regenerated or planted up by MTO in anticipation of becoming part of a forestry tender benefiting previously disadvantaged communities. At the Bergplaas and Buffelsnek Plantations particularly, large areas of these immature plantations were devastated by the fires. DAFF is by default the responsible land manager for all these exit plantation areas, including the Witfontein Plantation bordering George (but excluding the exit areas east of the Wilderness which have been transferred to the Garden Route National Park).

The neglect of these areas has for a long time been a bone of contention, especially the unmanaged fire hazards that have built up. MTO is about to complete the clear-felling of the last exit plantation areas, and will leave behind a vacuum regarding the management of alien vegetation and fires in these ‘abandoned’ exit areas. After 2020 MTO will manage only the sustainable lease, comprising the Kruisfontein Plantation north and east of Knysna, and the Tsitsikamma State plantations.

However, DAFF has now entered into a memorandum of understanding with Working on Fire (WoF) regarding fire suppression, as well as a service level agreement providing for fire management such as preparation of fire breaks and controlled fuel reduction burns. The Southern Cape FPA (SCFPA) will oversee this.

After the Outeniqua fires DAFF compensated the FPA and WoF for costs incurred in fighting the fires on DAFF plantation areas. This signals a long awaited turning point in relationships between the various stakeholders.

On the other hand, the Garden Route is faced with serious challenges regarding the control of vast areas of alien invader vegetation in the burnt mountains. Even if adequate financial resources are found, there will not be enough human and other resources to effectively cope with the tens of thousands of hectares of invasives in the remote and difficult to access mountains. These alien plant invasions will have profound impacts on biodiversity, soil stability, and water conservation. 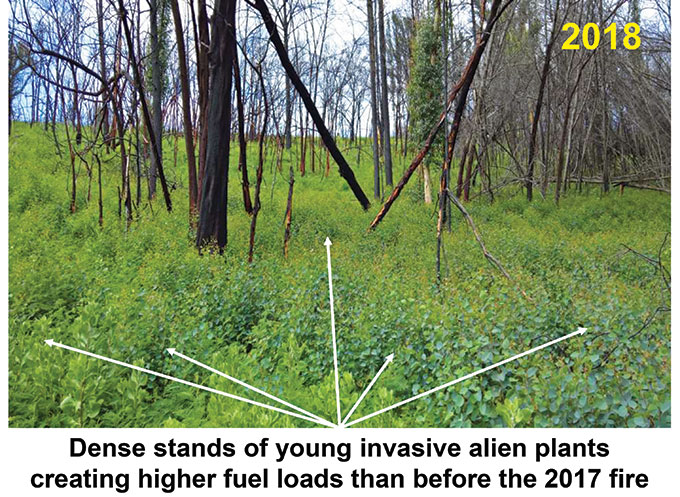 A strategy for integrated fire management and systematic control of alien invasive vegetation is therefore a high priority for the Garden Route.

Paul Buchholz, who holds an MSc in Environmental Management and has more than 20 years’ experience in environmental management (including 13 years in hands-on catchment fire management) in the region, is currently assisting the Garden Route District Municipality (GRDM) to compile an integrated fire and invasive alien plant control strategy for the Garden Route District.

However, as with everything, without financial resources very little can be achieved on the ground, notwithstanding all the strategies and programmes.

It is therefore very positive that the Department of Environment Affairs’ (DEA) Environmental Programme has received more than R150 million in disaster funding to implement drought aid projects, which include the control of IAPs in the Garden Route; post fire control of IAPs and soil erosion projects in the Knysna 2017 fire disaster area; and preparation of strategic fire breaks in the GRDM.

The DEA is currently engaged in planning the implementation of these projects, which will commence in the next couple of months.

However it is clear that the R150 million is but a drop in the ocean of what is actually required. To clear the 264 000 ha and bring it to a maintenance level in the Outeniqua area between Mossel Bay and Plettenberg Bay over a nine year period, will require an estimated R2,3 billion.

In the meanwhile it is important to use available funds where they can make the biggest impact. The Outeniqua mountains, the majority of which burnt in the recent fires, have been identified as a national priority water source area. One of the biggest threats to this important water source area is invasive alien plants and it is therefore imperative to focus invasive alien plant control efforts in those catchments. 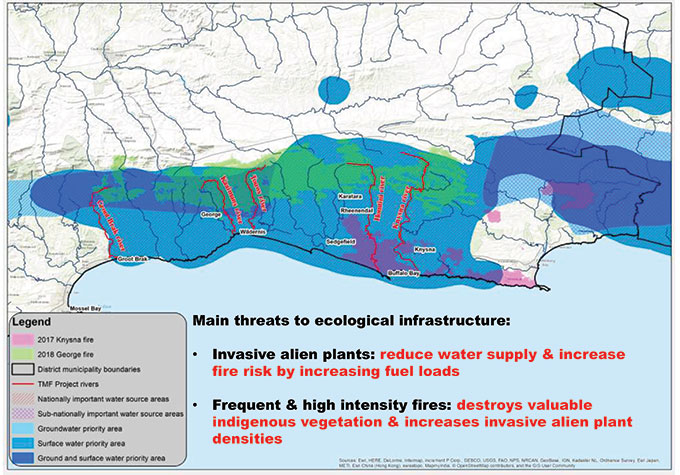 A debriefing meeting for all role players who participated in the Outeniqua fires was held under the chairmanship of the GRDM in mid-March. From discussions with Paul Gerber and Wayne Young of the SCFPA, the most important points to emerge from this include the following:-

1. No one organisation can handle mega-fires and cooperation between all stakeholders is indispensible. However the DM has accepted full responsibility for co-ordination and suppression of veld and forest wildfires within its region.
2. A fire working group comprising all roleplayers, to be synchronised with the SCFPA Exco meetings, is to be established to ensure the proper and smooth coordination of all actions.
3. This extraordinarily large mega-fire resulted in a fire line of 400 km, which severely tested available human resources. Fire lines allocated to divisional fire bosses were much too long, and there were far too few experienced fire bosses available. Fire fighters were spread out too thinly on the fire lines.
4. A lack of trained, experienced senior supervisors was identified.
5. As with the Knysna fire, fire fighters from other parts of the Province had to be brought in to help. Although many of these were experienced, they were unfamiliar with local conditions, and there were no protocols in place to ensure they consulted local operational expertise.
6. The importance of counter burns as a mechanism to combat fires was emphasised.
7. Helicopters were deployed too late and there seemed to have been bungling in this respect in the early stages of the fire.
8. Serious lacks regarding WoF teams were identified. There was an incident of WoF personnel deserting the fire scene because they didn’t receive food. One of the main obstacles is that WoF works under very strict rules of engagement which prevent workers from exceeding 12 hour shifts. This is a matter that needs to be addressed at Cabinet level, to put them on par with other emergency services which can work 24 hour shifts. Also WoF teams need to be guided by senior supervisors, of which more are needed.
9. There was inadequate co-ordination between aerial services and ground crews - especially at big fire fronts, because of the shortage of ground crew staff.
10. Communications generally, as with the Knysna fire, need to be improved.
11. Large controlled block burns in the mountains are no longer possible and should be replaced by a system of selective buffer zones that are burnt periodically at strategic places, planned on a regional basis. Such strategic buffers could for instance be created along main roads, and the lower mountain slopes which would be burnt in blocks, to reduce fuel load.
12. Unburnt patches in the Outeniqua burn scar should be burnt out while the surrounding veld is young and fire hazard still low.
13. ICS training needs to be extended to role players beyond the fire fraternity.
14. The GRDM needs to come up with a simple, affordable system that encourages landowners to do block burns to reduce fuel loads on their property, and provides them with assistance to implement these burns safely and carry part of the risk.