Home » The great bugweed debate:  To clear or not to clear

The great bugweed debate:  To clear or not to clear 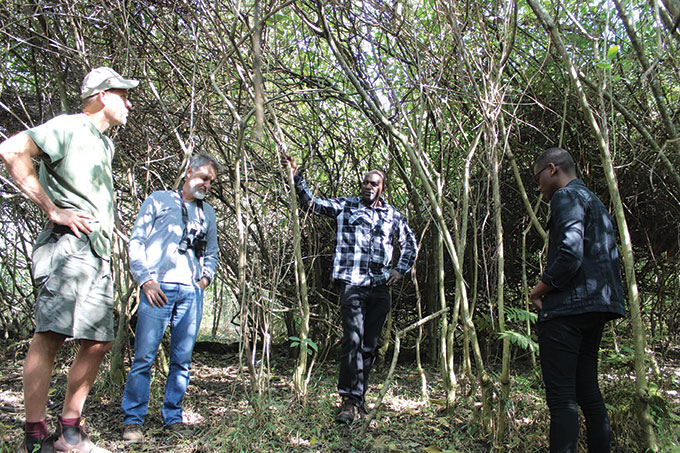 Bugweed and Lantana are two of the most problematic alien invasive plants in South Africa. Natives of South America, these two plants have invaded large tracts of land especially in the high rainfall areas of South Africa, outcompeting and dominating native vegetation, reducing biodiversity and rendering the invaded land virtually useless.

Traditional control methods have focused on mechanical and chemical control. Countless millions of rands have been spent on clearing operations, yet in many cases the bugweed and lantana comes back worse than ever, unless relentless and costly follow-up operations are conducted over many years. They are tough survivors, tolerant of drought, fire and frost, have no natural enemies (in South Africa) and are prolific producers of seed that is widely dispersed by birds and small mammals.

The prime areas of invasion of these alien plants is disturbed land, such as alongside roads and railways, abandoned or neglected crop lands, gaps in natural forest edges damaged by fire and in and around commercial forestry land. They seldom infest intact natural vegetation.

There is an alternative view on the most effective method for clearing bugweed that has been suggested by some ecologists, foresters and farmers. This approach is founded on three key facts:-
• Bugweed is a pioneer species that self-thins over time, becomes moribund and dies off at around 20 years.
• Bugweed generally doesn’t establish under existing plant canopies as their seeds ONLY germinate when there are daily fluctuations in light and temperature, as would be expected in exposed degraded areas. They do not germinate in the stable conditions found under other plant canopies.
• The thinning bugweed canopy provides some protection to emerging indigenous species that have managed to germinate, and these will eventually replace the bugweed as it dies off. Various management interventions such as partial thinning and the planting of indigenous species beneath the bugweed canopy may facilitate and speed up this process.

Eminent forest ecologist Dr Coert Geldenhuys has sparked widespread interest in this theory. He has reported that indigenous tree species growing beneath plantation trees and bugweed canopies located close to the edge of natural forest patches indicate the potential for the natural vegetation to regenerate over the long term, with minimal or no management intervention.

This approach was also discussed at an NCT field day that I attended at Enon in the KZN midlands way back in 2008.

But these theories have never been tested against empirical evidence.

Now a group of scientists from the Forest Biodiversity Research Unit, School of Life Sciences at the University of KwaZulu-Natal have set up two fascinating research trials aimed at testing these theories. The studies are part of the SA National Biodiversity Institute-GEF 5 Biodiversity and Land Use project focused on achieving biodiversity goals within agricultural production landscapes, particularly timber.

These studies have the potential to change the way land managers approach the control of IAP species like bugweed and lantana.

Ferncliff study
This is a long term (10-20 years) study aimed at providing data and evidence to inform the rehabilitation of heavily infested alien plant stands and exited commercial timber areas in the KwaZulu-Natal midlands and beyond. The study plots are located at Ferncliff Nature Reserve outside Pietermaritzburg. The information below is derived from unpublished work by the research team comprising Hylton Adie, Richard Lechmere-Oertel, Steve Germishuizen, and Zivanai Tsvuura.

The key questions that the research is seeking to clarify is if a hands-off (or partially cleared) approach to the control of bugweed in the KZN midlands is a viable alternative to the traditional mechanical and chemical clearing approaches. It will also examine the nurse-plant role that bugweed may provide for planted indigenous tree seedlings. It will do this by examining the effect that clearing the alien invasive plant canopy has on the survival and growth of indigenous tree seedlings over the next ten years or so.

The Ferncliff site has a history of commercial timber farming and alien plant control. Despite being almost completely cleared of alien trees as part of a government programme about 10 years ago, it is now covered in a dense mature canopy of bugweed, lantana and cestrum (C. nocturnum), with a few natural forest species like cabbage trees surviving here and there. A dense tangle of vines and creepers is further restricting the recovery of natural vegetation on this severely degraded land.

(Cestrum is not part of the field experiment as it is an alien plant that – unlike bugweed and lantana – is not widespread in South Africa.)

In January 2018 the research team pegged out four replicate sites under the alien plant canopy, each with three 20 x 20 metre plots which were either totally cleared, partially cleared or left uncleared.

The survival and growth of the planted seedlings was recorded over the following 18 months by Nhlakanipho Ngubane, a post-graduate UKZN student. His results show a clear initial pattern of survival between the treatments, with many more seedlings dying in the exposed sites (78 deaths) compared to the partially cleared (33 deaths) and uncleared plots (14 deaths). This is most likely due to the harsh initial conditions of the exposed sites and the overwhelming regrowth of alien plants there.

The sites will continue to be monitoring over the coming years. 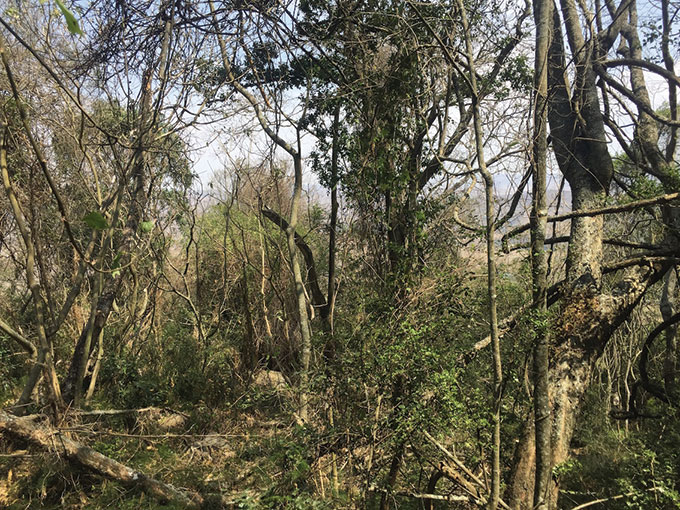 Impendle site: Above: An untreated plot showing the open structure with a few remnant bugweed stems and almost no weed or climber growth. Below: A treated plot that has become dominated by bramble and other weeds. 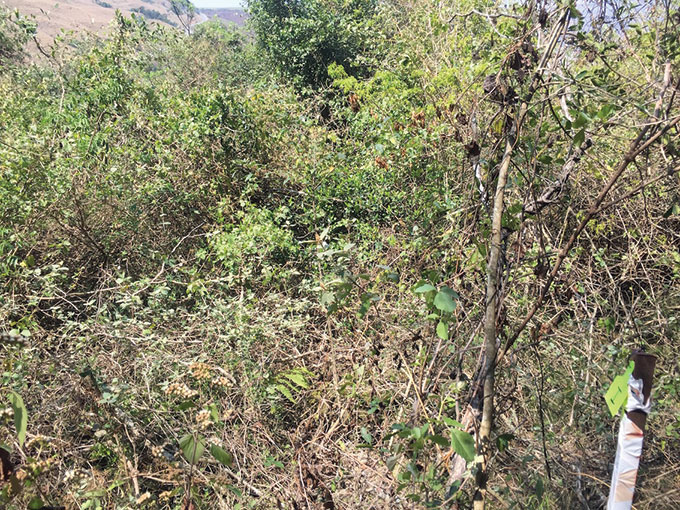 Impendle study
This study compares bugweed succession and natural forest recovery in cleared and uncleared infested areas after 20 years in the Impendle Nature Reserve, near Bulwer in KZN.

In the late 1990s a fire penetrated and destroyed several hectares of indigenous forest, which was promptly infested by a very dense stand of bugweed with thousands of stems per hectare. In 2000, Ezemvelo KZN Wildlife started a research project there to study various bugweed control measures, but although some useful baseline data were collected the research was never completed.

The results were very striking indeed!

Bugweed areas that had been cleared in 2000 were densely packed with an impenetrable thicket of woody shrubs interwoven with numerous scramblers, creepers and climbers forming a canopy cover of 60-95%, all but smothering any seedlings growing underneath. 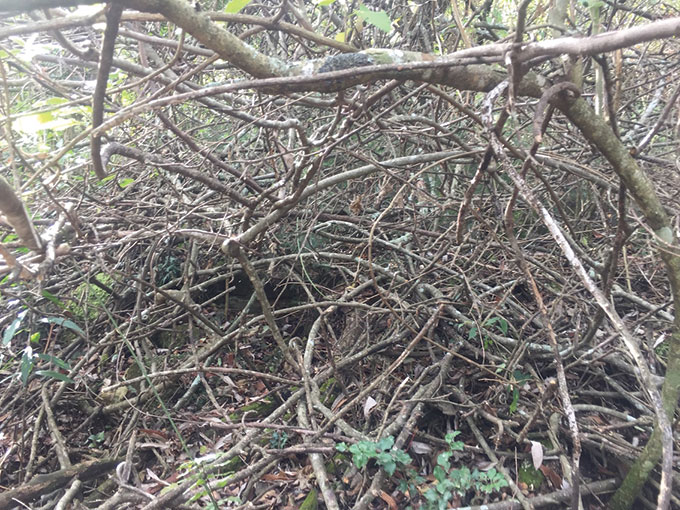 Treated plot showing the dense tangle of climbers & creepers that can dominate.

In contrast, the areas that were previously infested by bugweed and were left untreated had self-thinned and maintained a fairly open structure, with a few scattered, dead bugweed stems and a much more diverse understory. Canopy cover in this plot was 15-30%, allowing a lot more light in, but there was almost no growth of alien plants.

These trends suggest that the effort and resources required to treat the initial bugweed infestation ultimately had no significant advantage vs the plots that were left alone with no clearing. The self-thinning of the bugweed achieved similar end result as the cleared plots. However, the disturbance of the initial clearing allowed the tangle of creepers, climbers and scramblers to establish in the previously cleared plots. This very dense thicket would in all likelihood alter the structure and composition of the vegetation going forward. 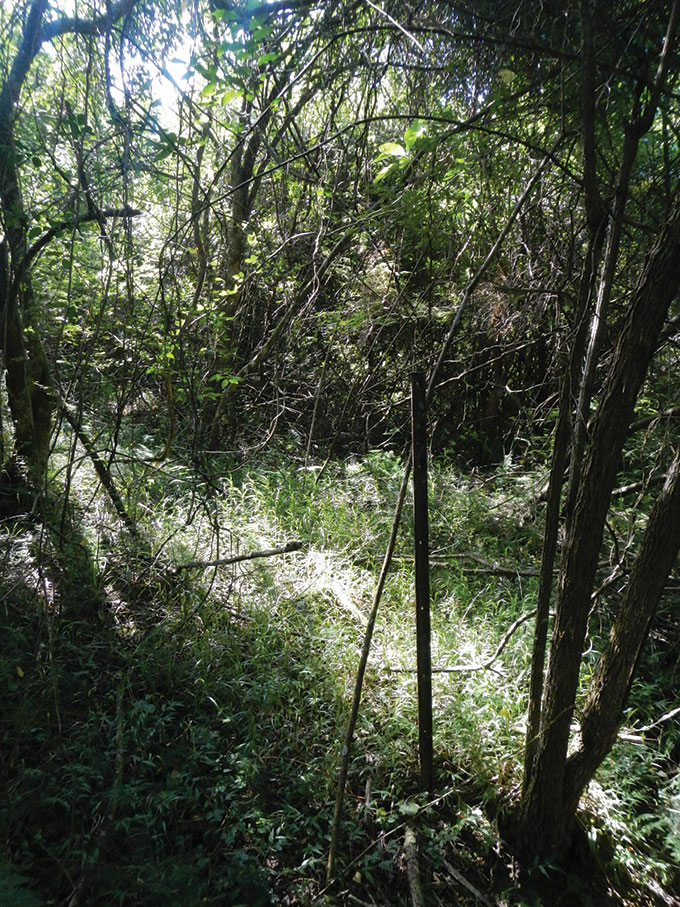 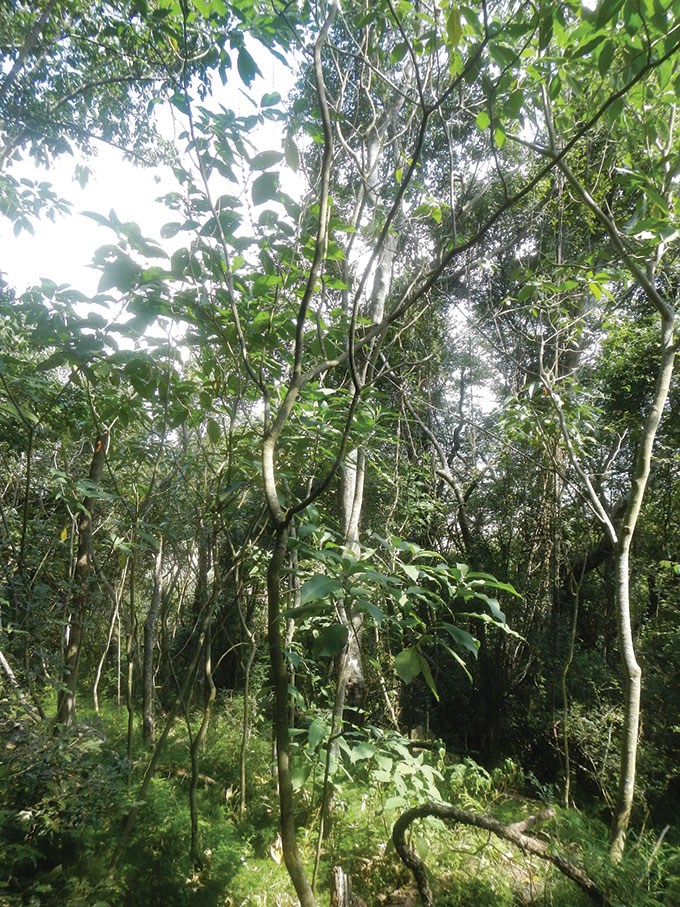 Take home points from this study:
Bugweed does not persist or regenerate once a canopy has established.

The presence of indigenous seedlings indicates the potential for indigenous woody flora to rapidly colonise a disturbed ecotonal area on the edge of a natural forest.

There is no major difference in the outcomes between treated and untreated bugweed stands so the cost of the initial clearing operation was wasted.

The clearing operation had one major impact though: it resulted in a thicket of creepers, climbers and scramblers that had a negative impact on indigenous plant regrowth and could ultimately change the structure of the vegetation.

Without further disturbance, the ecotone will likely recover towards natural forest. This process could potentially be speeded up through strategic management interventions such as clearing AIPs around existing indigenous plants and planting key indigenous species in gaps in the canopy.

In conclusion, Adie and Lechmere-Oertel state: “Our work shows that, if the goal of the clearing of bugweed is forest restoration, and if time is not an issue, then it may be best just to leave the bugweed infestation to follow a natural successional process. If there is need and budget, strategic localised planting of indigenous plants, and selective clearing around existing indigenous trees should be considered.”

The authors also noted that further, long-term research is essential as forest successional processes occur over long periods of time. To this end they initiated the more controlled experiment at Ferncliff Nature Reserve.