Home » Weaning the forestry industry from its paraquat reliance

Weaning the forestry industry from its paraquat reliance 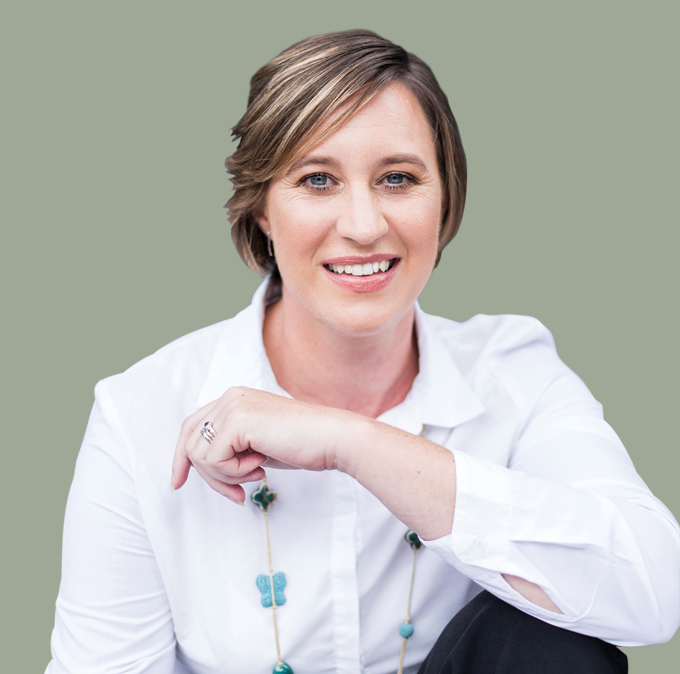 In the last ten years, 153 576 hectares of plantation forest have been damaged by fire. This figure would have been exponentially higher if it wasn’t for the kilometres of legally required firebreaks prepared annually by the Forestry Industry.

A large proportion of forestry firebreaks are in ecologically sensitive areas where using man-made features such as roads are not an option, in these cases firebreaks need to be burnt. Tracer-belts are used to prevent firebreak burns becoming runaway fires, etching a ±1.2m boundary line with herbicide either side of proposed firebreak.

Paraquat has been the go-to product when it comes to tracer-belt preparation for over a decade. A fast acting, non-selective, contact herbicide, paraquat is perfectly suited for this application. By only removing the above-ground portion of both grasses and broad leaf plants, allowing regeneration of the vegetation with the onset of spring rains, using paraquat reduces the risk of erosion and/or invasion by alien vegetation. 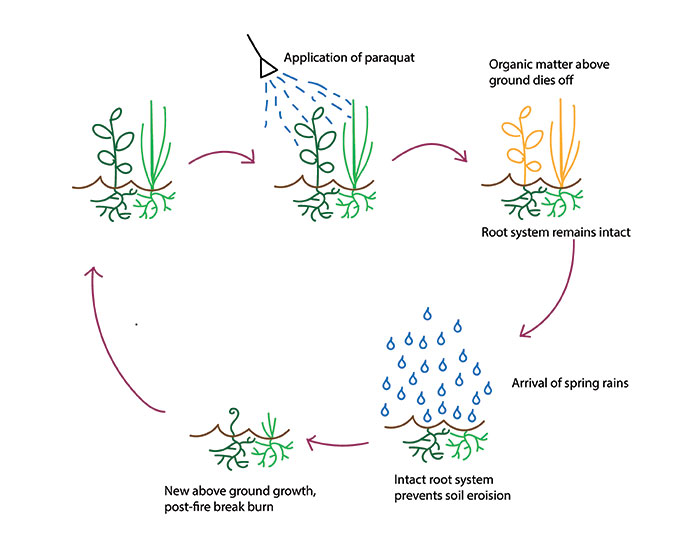 From an environmental and economic perspective, paraquat is the obvious choice, being more efficient, cost-effective and posing far fewer potential environmental hazards than its glyphosate and glufosinate-based alternatives. However, there is a darker side to paraquat, its acute toxicity to animals and humans.

In China alone, on average 5 000 deaths a year are attributed to paraquat and it is not just China, globally thousands of people, every year, die as a result of paraquat poisoning, 93% of these are suicides. Ingestion of just two teaspoons is enough to kill, causing liver, lung, heart and kidney failure. (https://en.wikipedia.org/wiki/Paraquat)

The Forestry Industry in South Africa understood the risk of paraquat and have put measures in place to prevent any accidental injuries or fatalities. Only skilled operators are used for applying the paraquat, with use limited to areas that are inaccessible to mechanised operations, i.e. on steep terrain. All operators undergo medical checks before and after the tracer preparation season and regular urine tests are taken. To date, no paraquat related fatalities have been reported in forestry in South Africa – a statistic the industry is very proud of.

The health risks posed by paraquat has seen it banned in the European Union, Thailand, Vietnam and Malaysia. A global ban, under the Rotterdam Convention has been petitioned by several countries, but repeatedly blocked by developing nations and the US who stress the economic importance of paraquat for third world farmers who cannot afford alternatives and the effectiveness of paraquat on a wide range of sites and vegetation types.

While a global agricultural ban on the use of paraquat may not be around the corner, the Forestry Industry in South Africa has taken proactive steps, actively seeking an alternative. This is good news for those Forest Stewardship Council® (FSC®) certified, which is 80% of SA forestry, as for them a ban is imminent.

The implementation of FSC’s updated pesticide policy (FSC-POL-30-001 V3-0 EN) on 1 August 2019 bans the use of any Highly Hazardous Pesticides (HHP) listed as prohibited. These are pesticides that are acutely toxic or can induce cancer or contain either dioxins / heavy metals. Paraquat falls under the former, being acutely toxic and so can only be used until the end of May 2020, as per the FSC derogation extension.

This means, come 1 June 2020, paraquat will no longer be available for use in FSC certified forests.

So what now?
Firebreaks, and thus tracer-belts, still need to be maintained as a legal requirement. The simple answer would be to look at what else is in our current pesticide arsenal. Glyphosate is registered for this use, but comes with major environmental drawbacks – namely its effectiveness as a systemic product on plant material both above and below ground. By killing the plant completely, glyphosate prevents spring-rain regrowth and increases the potential for soil erosion and insurgence from alien invasive species. 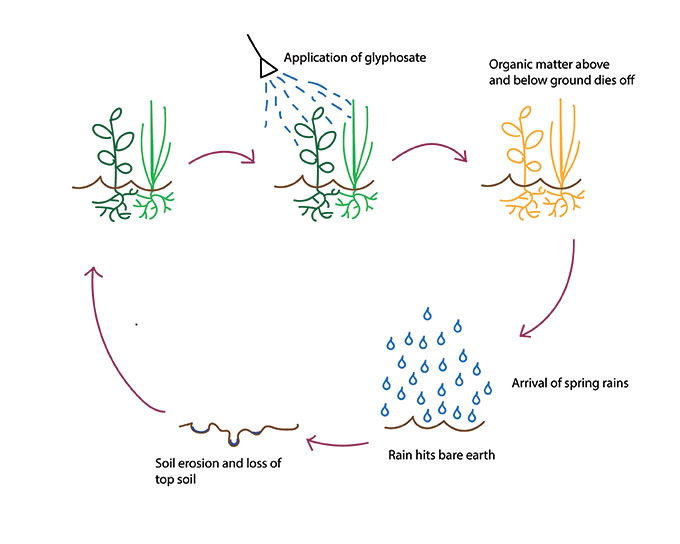 If not glyphosate, what else?
Here is the predicament the Forestry Industry currently finds itself in. Within the primary production sector, forestry constitutes a relatively small pesticide market, that does not command the same attention from pesticide manufacturers. Especially, when so many pesticide companies have had their products removed from approved lists as a result of certification requirements.

Without the pesticide manufacturers initiating the search for new and innovative products to replace paraquat, the responsibility has fallen on the shoulders of the Forestry Sector, with Forestry South Africa (FSA) Pesticide Working Group (TIPWG) taking the lead. 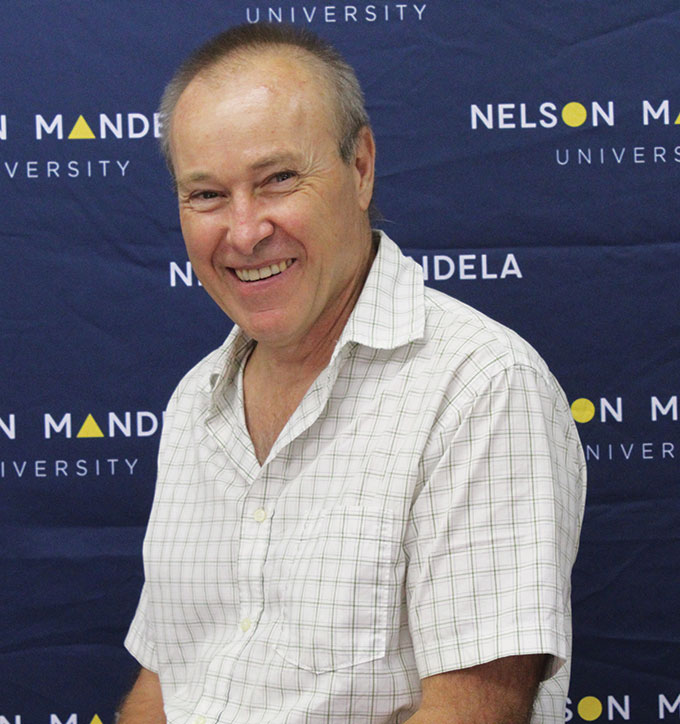 First phase trials identified a number of potential alternatives to paraquat including pelargonic acid. Like paraquat, pelargonic acid is a contact herbicide that results in above-ground desiccation, without compromising the plant’s root structure. As such, the vegetation recovers after the tracer-belts have fulfilled their role in controlling firebreak burns.

A second phase of experimentation identified a broad spectrum of weed species pelargonic acid acted upon and tested the efficacy of various application methods and timings.

Currently, a third phase of bridging trials are under way to compare the original formulation of pelargonic acid tested in the earlier trials to a new formulation, and to provide the information required to register pelargonic acid under Act No 36 of 1947. However, there is still likely to be a gap between a ban on paraquat’s use and pelargonic acid being registered.

Bridging the gap
Thanks to the Forestry Industry’s proactive response to the prospect of a paraquat ban, this means we do have an understudy (pelargonic acid), perhaps not stage ready, but certainly waiting in the wings.

The next step is applying for an Emergency Registration under Act 36 of 1947, which Dr Gerhard Verdoorn of CropLife SA is currently assisting TIPWG with. With CropLife’s support and the information obtained from the bridging trials, we hope to have pelargonic acid available for the 2021 summer rainfall area fire season.

The paraquat/pelargonic acid research is an example where Industry-led research and collaboration has enabled us to find Industry-based solutions to Industry problems and illustrates the importance of Industry-led and funded research.

A special thank you goes out to all the chemical companies who have helped us get to this point by providing product for testing, especially Avima who are also ready to register their product once this final round of testing is complete.