Home » The ups and downs of aerial reforestation

The ups and downs of aerial reforestation 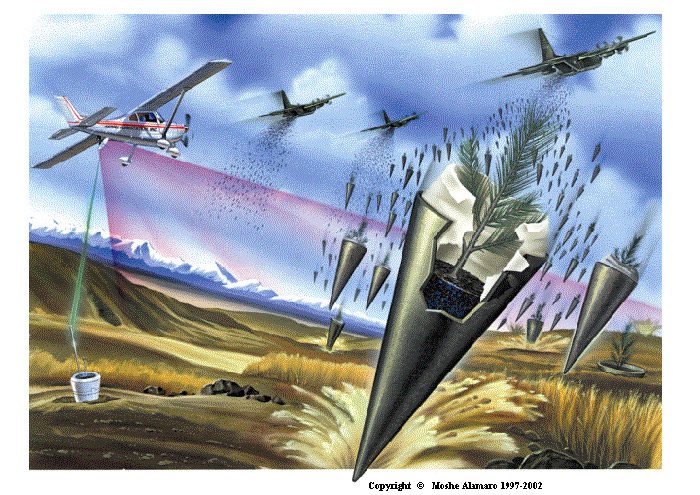 Aerial reforestation is a farming technique where trees and other crops are planted by being dropped from an aeroplane. The earliest records of aerial reforestation date back to 1930, when planes were used to distribute seeds over inaccessible mountains in Honolulu after forest fires devastated the area.

More recent research has proven that dropping saplings in 'aerial darts' is far more successful, because saplings are stronger and more resilient than seeds. The aerial darts are made up of bio-degradable, cone-shaped containers filled with damp soil, a sapling and a dash of fertiliser! The neatly packaged sapling 'bombs' are dropped from a low-flying plane, so that they hit the ground at approximately 200 mph and imbed themselves in the soil.

The idea was first conceived in the 1970s, and it was further developed by Moshe Alamaro in the 90s, but it seams to have failed to take root.

In 1999, The Guardian reported that transport aircraft previously used to drop landmines were being adapted to plant trees in remote areas of Scotland. According to the article, "Equipment installed in the huge C-130 transport aircraft has been adapted to deposit the trees in remote areas including parts of Scotland. The idea, originally from a former RAF pilot, Jack Walters, has been developed by the US manufacturer Lockheed Martin Aerospace."

This method enables one pilot to 'plant' up to 900 000 trees in a single day, completely re-inventing the possibilities of reforestation. The 'sapling darts' were designed by Moshe Alamaro, a mechanical engineer and founder of Aerial Forestation Inc. Mr Alamaro projected that his company would be planting 3 billion trees a year by 2004.

However, a Google search of the company Aerial Forestation Inc yields no results. So what happened to the project? After some digging, we discovered this presentation by Jack Stewart, an Aeronautical Engineering student from the University of Glasgow who is taking the idea and technology of aerial reforestation forward…

If aerial reforestation is perfected and implemented, it will prove to be a significant way of combating climate change. It might also mean that foresters of the future need to take to the sky.