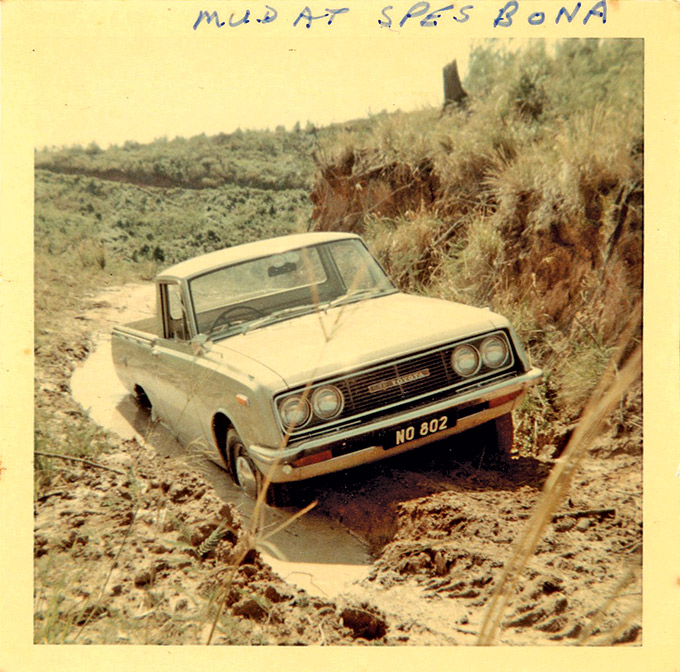 The first frame of a cartoon from some years back depicts a thin little fellow, dressed in traditional Arab cloak and fez, a large axe over his shoulder, and a giant Canadian lumberjack towering over him.

“So you want to be a lumberjack?” the Canadian asks in disbelief. “Where are you from?”

“The Sahara,” comes the response.

“But there aren’t any trees in the Sahara,” says the beefy lumberjack.

The next frame shows thousands of tree stumps in sand dunes all the way to the horizon: “Not any more, there aren't,” says the Arab.

Which brings me to how some things have changed over the years.

The chainsaw took over from the axe in the late sixties, but its potential was not immediately utilised. Felling by axe continued, while chainsaws replaced the bow saw for cross-cutting. Looking at the machines of that time, it is easy to see why: today's professional machine weighs between 4 – 6 kgs; the McColloch 660 of the late 1960s weighed 12kg without bar and chain! It took a strong man to fell with such a machine. 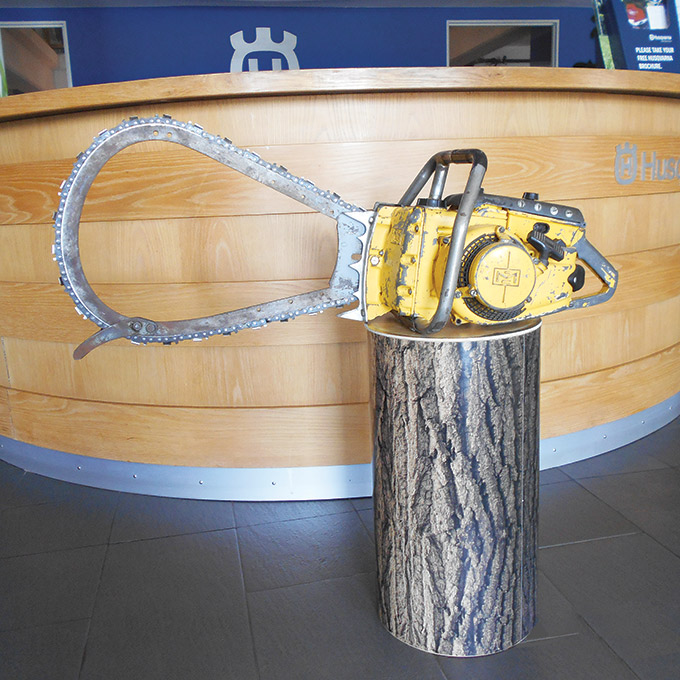 It took a strong man to fell trees with this old McCulloch 660 chainsaw, which weighed 12 kgs without bar and chain, and replaced the axe. (Photo: Husqvarna Museum)

Those that could were real 'iron men'. For cross-cutting, a long bow-shaped guide bar enabled the operator to work standing upright, which made things somewhat easier, but kick back and the lack of a chain brake made it hazardous.

In the early sixties, as a result of market problems created by World War II and over-production in Brazil, the local wattle industry was felling 17 to 18-year-old stands, yielding massive poles which, once timber markets opened up, had to be transported to the mills.

Twelve-ton, two wheel drive lorries collected logs at roadside, often in hilly terrain on roads barely wider than the vehicle, to be transferred to rail at sidings up to 50 kilometres away.

There were no mechanical loaders, but there were ‘iron men’. A team of four would fill the lorry, drive to the rail-siding and transfer the load by hand into a rail truck, then drive back to the plantation to repeat the process before knocking off for the day.

Loading bulky bundles of wattle bark was not much easier. Watching a Bell effortlessly swinging bundles of poles or bark, one can only marvel at the strength and stamina of those supermen of yester-year.

They've gone now, faded into forest mythology by the march of mechanisation. 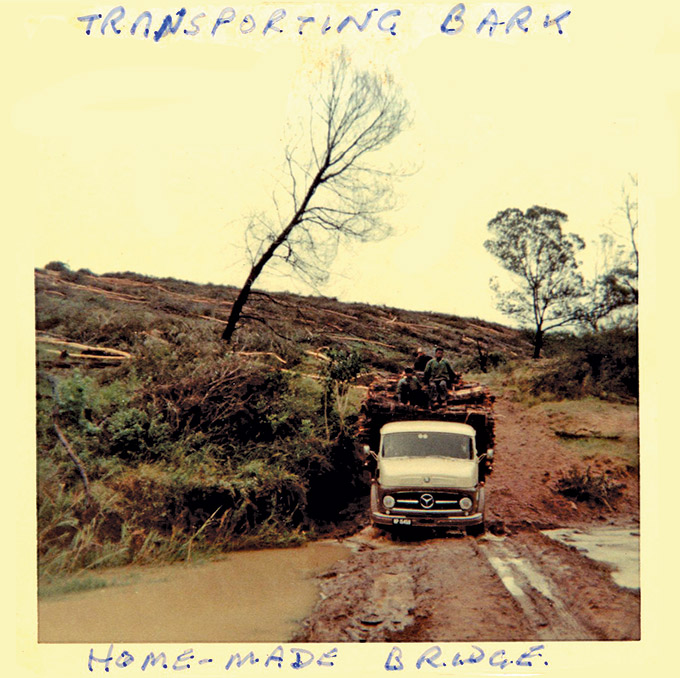 Horse to machine
The transition from horse to mechanised transport was hastened by the availability of markets for timber hitherto discarded as waste. Forestry began to move into the industrial rush we know so well today. Time condensed in direct proportion to the expansion of processing capacity; in a few short years the bakkie became a necessity.

The big Chevs, Dodges and Fords from post-war times gave way to the diminutive Toyota Corona - essentially a Corolla sedan with a bin. With low clearance and two-wheel drive, it looked singularly unsuitable for rural use, but was remarkably capable and lasted forever. The muddy, rutted, pot-holed roads that it conquered in skilled hands were a source of amazement, and I must add, a lot of fun; the wonderful 4x4 would remain a wistful dream till years later.

I was quietly amused recently when a 2x4 Hilux was referred to as 'not a proper bakkie'!

In the wake of the bakkie came a metamorphosis of susceptible foresters. Please note the word 'susceptible'. The suntan (on the white guys), so admired by the fairer sex, shrank from all-over to bronzed right arm. Muscular calves gradually lost their definition, and the culture of the BWI (Bakkie Window Inspection) was born. It is an excellent sylvicultural tool - provided the boss subscribes to it - and it goes like this:

Forester, peering into plantation from bakkie, to Induna; “Kulungile konke?” (Is everything alright?)
“Ayikho inkinga” (no problem!) comes the reassuring response, and off goes forester.

Of course, everything is ‘lungile’, because said induna has worked out how far you can see from the bakkie window. A problem arises when the boss’ interpretation of BWI is ‘Boss Walks In’ - to see what things look like in the middle of the compartment!

Sure, we had fire seasons when wattle was virtually the only species, but the brush lines were mostly burned in summer, and the remaining ones, as well as the stacked discarded timber, constituted the main danger.

A highly combustible, wall-to-wall forest floor introduced a whole new dimension to fire risk. Resources, communications and equipment had to be increased and improved. Fire teams had to be beefed up and trained. Aerial fire fighting became a reality. Legal compliance with updated legislation became critical, and Fire Protection Associations with statutory powers were formed.

An industry has evolved within an industry. All of which combine to place enormous pressure and stress on today’s foresters, making the old days of fire protection seem like a holiday in comparison.

I must mention a pioneering exercise in fire-fighting efficiency by a zealous area manager who selected an enthusiastic group to train as probably the first-ever Proto Team. Frequent drills were held, a tractor was dedicated to a water cart equipped with a good pump, all of which was put in place for the day when a fire would be dealt a clean and effective blow.

Come the day, the team sprang into action, and hastened to the fire, led by the enthusiastic area manager. Arriving at the fire, the hose was unreeled in record time, and the order given to open up the pump. Valves opened, and the hose man waited for the surge of water. Nothing happened. The water cart was empty!!

So overcome was the area manager, a big man more than six-foot tall, that he threw himself down and beat his hands and feet upon the ground like a child throwing a tantrum, emitting long howls of anguish to the astonishment of all present. 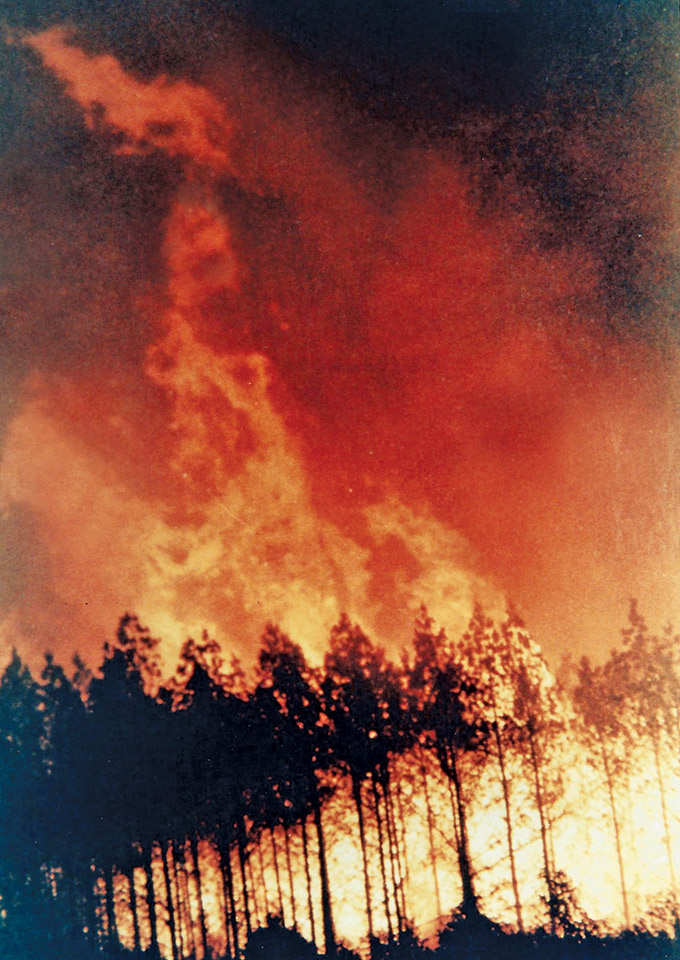 Fire tips
Fire season is not too far away. Some things I’ve learned as time has gone by:-
• Plantations on North-South ridges: given the right conditions, burn the eastern slopes when the sun is on the east flank, i.e. in the morning, and the west one in the afternoon. The fire tends to follow the sun, thus away from the trees.
• The wind is often influenced by the position of the moon; when it goes down, so, often, does the wind. Knowing this can help both controlled burning and runaway fire management.

Runaway fires: a few points
• The bomber is the first line of attack. It is not a back-up. Call it early. At a conservative 120t/ha, one hectare of Eucalyptus pulpwood is worth R90 000.
• Never race to a fire - you might not get there. You and your staff are not replaceable. The trees are.
• At a runaway fire, if you’re running about with a beater, you’re not managing.
• Who’s the fire chief? If you don’t know, find out, and let him know who and where you are, and what resources you’ve brought. Stay in touch with him. Communicate essential information to those who need it during the fire-fighting. Don’t act unilaterally, unless it is unavoidable.
• Know where your crew and equipment are. Keep in touch with them. Make sure they have drinking water. Have a replacement shift available if possible. Beware running out of fuel.
• Find out where the water points and the main access roads are.
• Anticipate the fire’s path and behaviour - look at the topography, fuel types and loads. The topography influences the fire.
• Bomber loads are a waste without ground crew support – the water is accompanied by a blast of air that can spread the fire. 2 500 kilos of water is equal to two and a half tonnes. Whole tree tips come crashing down under that weight: the ground crew needs the right PPE. Make sure there is warning of the approaching aircraft to allow ground crews to move away.
• Plan an escape route before you go in, and agree to it with your crew.
• Fires are fought from the flanks, not the front.
• Never put yourself or anyone else in front of an oncoming fire. No matter how good your equipment, knowledge or skill, it will very likely be the last place you or they go. Even a light fuel load generates intolerable temperatures. Don’t under-estimate it.