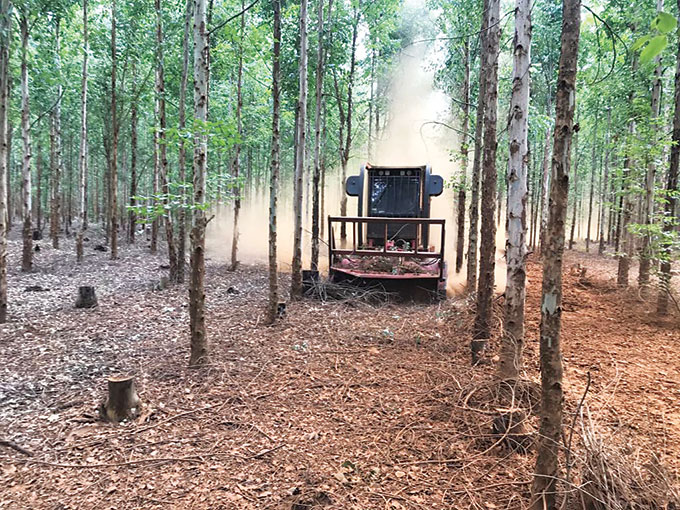 With the massive Knysna fires of 2017 still fresh in our collective memories, and the arrival of another challenging fire season in the summer rainfall areas of South Africa, foresters and land managers around the country are on edge.

And so they should be!

More extreme weather conditions as a result of climate change has increased dry fuel loads around the country, while the expanding urban/rural interface has increased the wildfire risks. Social and political volatility has also raised the bar a notch or two, with arson fires becoming more frequent.

What foresters fear most are those days when the fire danger index moves into orange and red and wildfires fanned by strong winds wreak havoc on farms and plantations.

Those are the moments when our minds reel back to the quiet days and weeks before fire season when the FDI was way down in the safe zone, and we wonder if we could have done more to safeguard our trees.

One highly effective method of reducing fuel loads that is gaining momentum in South Africa is inter-row mulching under the canopy in both Eucalyptus and pine compartments. This method is gaining traction as it can be applied selectively in high risk compartments to contain the cost, creating effective, minibreaks where fires can be slowed or stopped.

The key to cost effective mulching is having the right equipment for the task. Many a mulching operation has been stopped in its tracks by inappropriate equipment selection.

One local company that has been engaged in mulching for more than a decade now is Piet Retief-based Enviromulch. The company was established by the late Steven Glutz, who introduced AHWI mulching equipment to South Africa in 2001. Horst Hellberg joined Steven in 2008, and the business has grown from one machine to eight machines currently operating in KZN and Mpumalanga. 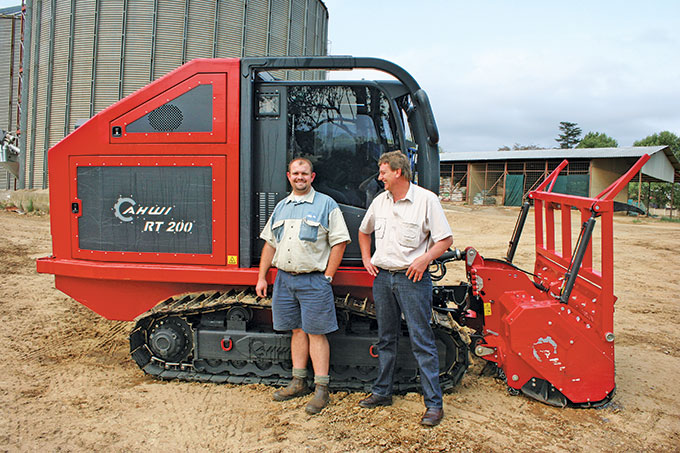 Horst Hellberg (left) and the late Steven Glutz introduced mulchers to forestry in South Africa more than a decade ago.

Enviromulch has several mulching and clearing machines in their fleet ranging from the big, burly Raptor 800 for heavy-duty work like cleaning up after harvesting, to the RT 200 which has proved to be ideal for inter-row mulching.

Enviromulch is currently contracted to do inter-row, under-canopy mulching for Mondi in the Iswepe area using the RT 200.

Iswepe has a high incidence of fires and forestry companies have had to find innovative ways of reducing fire risk.

One person who needs no persuading of the benefits and effectiveness of inter-row, under-canopy mulching is Mondi’s Silviculture Technical Manager, Dean Da Costa.

For Dean it’s all about reducing the fuel load and improving access. Mondi does brashing in Eucalyptus compartments to remove the low branches and improve access, and prunes to two meters in pine pulp compartments for the same reason. This puts fuel on the floor which creates a fire risk and hinders access to the compartment.

Another major issue, especially in the gum compartments, is relic stumps.

Mondi’s team has taken a strategic approach, mulching every 20th row where the fire risk is not so high, and every 8th or 10th row in higher fire risk compartments. The following year they will mulch the next row and so on, until all the inter-rows have been cleaned. 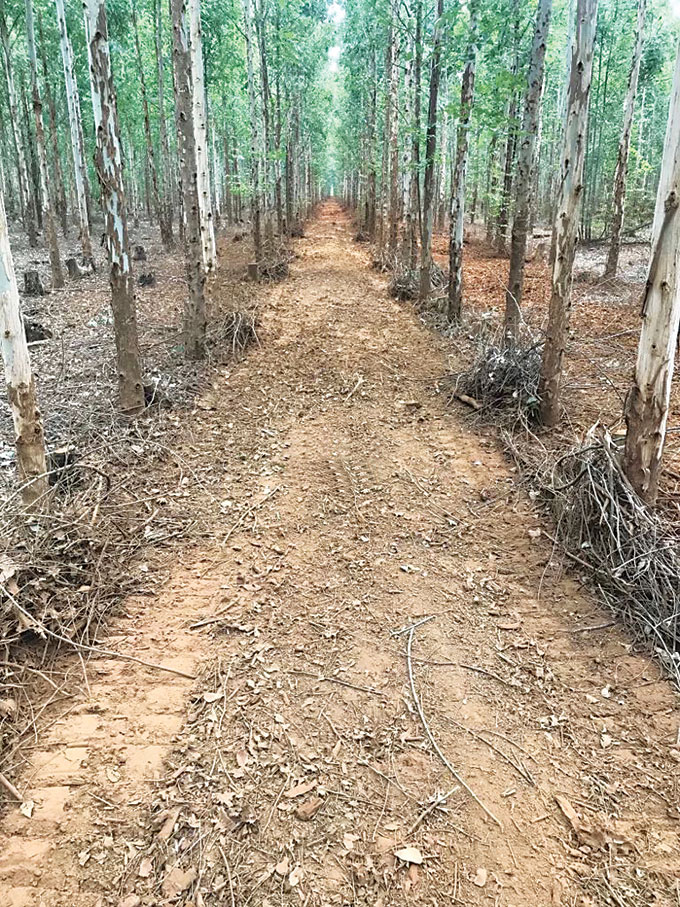 Inter row-mulching can easily be followed by a discing operation the following year especially in high fire risk compartments. Discing is a relatively quick, simple and cost-effective operation that turns the mulched material into the soil.

“We use the mulcher to break up the material, but it can still smolder and burn in a fire,” said Dean. “Discing coats the material in soil and helps to smother a fire.”

Relic stumps are also a big problem inside compartments. Eliminating the old stumps benefits all future operations, manual or mechanical.

Mondi uses the under-canopy mulching and discing approach throughout their central plantations around Piet Retief, Iswepe, Dumbe and Ntonjaneni, and even some areas in the KZN Midlands.

Of course it can only be done where the terrain permits it. Rocky areas are a no-go zone for the mulchers, but the RT 200 is versatile and can work in slopes up to 35°.

Dean says Mondi has been mulching under canopy in Iswepe since 2007, so it is nothing new, but he says it is gaining momentum. He says he would mulch and disc every row in risky areas if he could, but the cost means the approach has to be more strategic. 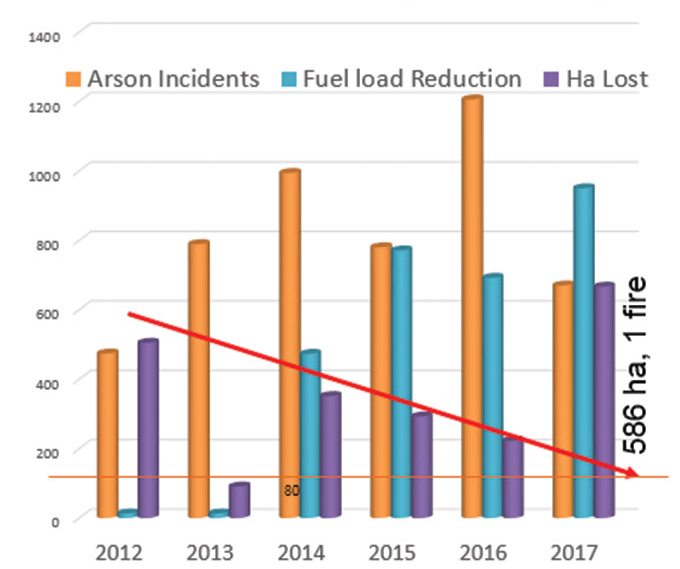 Mondi’s Iswepe Area Manager, Rudi du Randt, says that the mulching and discing operations have had a significant impact on reducing wildfire damage in the area under his management, and access to the compartments for all subsequent operations is much improved.

He notes, however, that stump size and species have a big impact on productivity and costs.

According to Horst, the current contracting rate for an AHWI RT 200 tracked mulcher is around
R1 740/hour – this is a ‘wet’ rate that includes all operational costs and fuel. The tracked mulcher uses on average of 18,2 litres fuel per hour and can cost land owners from R 760 up to R 6 090 per ha, depending on number of rows to be mulched, stump size, species and age, and density of slash. 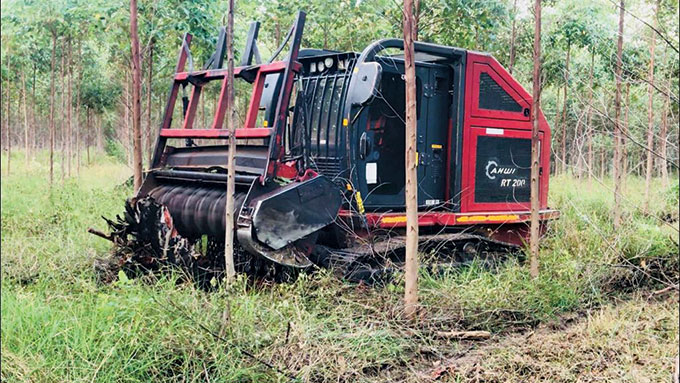 The current contracting rate for an AHWI RT 200 tracked mulcher is around R1 740/hour – this is a ‘wet’ rate that includes all operational costs and fuel.

Horst is currently involved in a variety of projects including inter-row and post-harvest mulching in forestry, conversion of forestry land to other crops such as macadamias and avocados, as well as biomass accumulation and processing with infield chippers.

He says that there are a lot of innovations happening in this field with new equipment like rotovators and strip stump-busters providing land managers with numerous options for clearing, mulching and processing biomass.

It has taken a while for mulching and biomass processing to take off in South Africa, due mainly to the cost factor. However with the escalating costs of purchasing additional agricultural and forestry land, farmers and land managers are opting to add value to their current operations, removing the hurdles on their journey to an increasingly mechanized future. 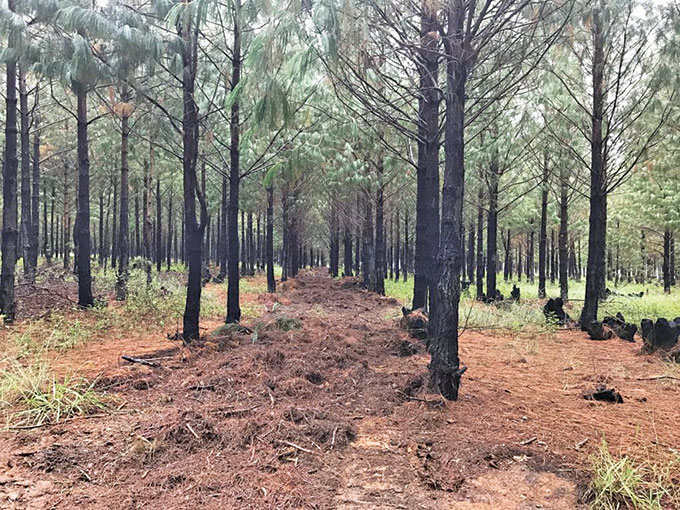 The RT 200 is used for inter-row mulching in pine as well as gum.

Purpose-built forwarders are designed to operate effectively in difficult terrain, so why aren’t they used to suppress fires in wildfire