Home » Pests and diseases on the move around the world

Pests and diseases on the move around the world

Nature is way more complex than anybody could imagine, and the deeper the scientists look, the greater the complexity they discover. Add to this scenario the fact that pests and diseases affecting trees are constantly on the move, evolving and changing in response to changing conditions, and the challenge facing the TPCP team to look after the health of our trees is getting tougher. 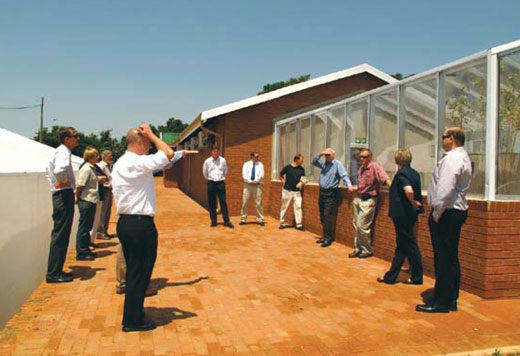 The opening of the new world class insect biological control facility at the University of Pretoria research farm. The quarantine facility is on the right.

As the movement of people, goods and plants around the world speeds up and increases in volume, so too do the pests and diseases that affect trees. So they pop up all over the place, far from their native range where they are controlled by natural systems.

"Pests and diseases will become more serious going forward, and the challenge to native forests is much greater and more complex than it is for industrial forests," commented Mike Wingfield in his welcoming address at the TPCP annual meeting in Pretoria.

Perhaps the mass mortality of Euphiorbia ingens trees in Limpopo province, and the dying Baobabs, is an indication of the increasing threats to our native trees.

Dr Terry Shaw of the US Forest Service said the pathways for the spread of pests and diseases are both natural and human-assisted. The fact that more than 7 450 non-indigenous insects have colonised urban and forest trees in the United States since European colonisation (70% entered the USA via live plants), illustrates the extent of the challenge facing scientists. Future threats that come with unknown consequences include hybridisation, host jumping, climate change and the escape of GMOs to forests and wildlands.

New technology
However, the tree scientists and researchers are developing new tools of their own. For instance, the development of technology making it possible to sequence genomes relatively easily and inexpensively, offers new possibilities for controlling pests and diseases, and is starting to have a big impact on the work of the TPCP. The successful sequencing of the pitch canker genome is already illustrating this point. This is providing researchers with a new set of tools to control and manage pests and pathogens, says Professor Brenda Wingfield, who is at the forefront of this work.

The sequencing of the Ceratocystis fimbriata genome by the TPCP team – which causes Ceratocystis wilt in Acacia mearnsii – has opened up new possibilities for disease management. Markus Wilken says they've already identified the gap in the genome that causes it not to reproduce. Now they're looking for the genes responsible for turning some Ceratocystis into a pathogen.

Dr Sanushka Naidoo said that through genomics, they now know all the genes that govern the growth, wood quality and disease resistance of E. grandis, and they are now busy identifying candidate defence response genes.

"Genetic sequencing is a game-changer. Biology is changing because of this technology," said Mike Wingfield.

Sirex
In his report, Brett Hurley said that the Fabi team is busy searching in New Zealand for new nematode strains to improve the Sirex biocontrol programme in South Africa. "Although the background parasitism levels are picking up, the impact is sub-optimal and we need to improve it by finding better nematode strains."

Studies by Dr Juan Corley in Patagonoa, Argentina, showed that sirex wasps can fly long distances (up to 70 kms) across treeless grasslands to the next plantation. Sirex spread rates around the world: SA – 46.8 kms/year; Australia: 40.1 kms/year; Patagonia: 19.43 kms/year.

Pitch Canker (Fusarium circinatum)
Sappi's Dr Andrew Morris said that pitch canker is a global issue, and is affecting mainly Pinus patula seedlings in nurseries in South Africa. This has resulted in a decline in post-planting survival of P. patula. It is also affecting mature Pinus radiata in the Southern Cape.

A Fusarium Working Group has been established, with research funding committed by Forestry South Africa. Various studies are under way, with collaboration from several industry bodies including Fabi, ICFR, University of KZN, Mondi and Sappi.

A complicating factor for nurseries is that tray contamination trials have shown that some seedlings have F. circinatum spores but do not show any symptoms. As a result, they are not rogued out and are planted in the field, where they are dying.

Dr Morris said that the industry is switching to more resistant hybrids, like P. patula x P. tecunumanii, but that this is not a silver bullet that will solve the problem completely. P. tecunumanii is susceptible to other pathogens.

Professor Emma Steenkamp provided some information on the airborne spore monitoring programme at the Ngodwana Nursery in collaboration with Sappi. The aim is to understand how the F. circinatum spores are spread around the nursery. In early results of the study, spores were detected throughout the nursery, peaking at different sites at different times of the year. The largest spore load was found at table height.

She said that the best approach to reducing the pathogen in the nursery is still through rigorous hygiene and rouging.

Leptocybe invasa
Bernard Slippers provided information on the control of Leptocybe, which was discovered around Pretoria in 2007/2008, but which is now spreading through Zululand and KwaZulu-Natal. The wasp lays its eggs on the midribs of young Eucalyptus trees and causes galls that can turn the tree into a little shrub.

He said research is following two paths: resistance in the host and biological control agents.

"Leptocybe has a wide host range. We know that there is clonal resistance, but not all plants of those clones are resistant, so we have started screening trials for resistance," said Bernard.

Diagnosis, monitoring and surveillance
Izette Greyling provided a report on the TPCP's monitoring and surveillance activities during the past year. She revealed that the diagnostic clinic received 2 500 samples, of which 85% were Fusarium related. The field trips undertaken identified a Leptocybe invasion in Zululand, and found that Gonipterus is becoming a bigger problem in areas where it never occurred before.

Host shifting
Professor Jolanda Roux said the shifting of fungi and insects from one host to another was increasing. "We have a number of native trees in South Africa that are closely related to especially Eucalyptus and Wattle, so there is increasing potential for host shifts the longer they are grown here. Our native vegetation is under increasing danger of host shifts," she said.

The Eucalyptus gall wasp, Leptocybe invasa, is spreading rapidly through South Africa. Found for the first time in South Africa in 2007 mainly in Gauteng, North West and Limpopo provinces, it has now spread into Zululand and the KwaZulu-Natal Midlands.

The wasp colonises mainly new growth/coppice of young Eucalyptus trees, and causes the formation of galls on the mid-ribs, petioles and stems. This results in severely stunted growth.

Currently, the only control measure available is to plant material resistant to Leptocybe. Contact your nearest registered nursery, or FABI at the University of Pretoria for more information.

The FABI team is testing a number of parasitoid wasps in their quarantine facility at the University of Pretoria, and is hoping to get permission to continue testing outside the facility later this year.

Apparently, bio-control in the Mediterranean region brought the pest under control in less than two years.

Meanwhile, Ken Leisegang of Sunshine Seedlings reports that his nursery is a licenced producer of CSIR/NCT clonal material, which has been tested for tolerance to Leptocybe invasa.

Ken says that FABI has confirmed that three of Sunshine Seedlings’ clones i.e. two GxU namely GxU 082, and GxU 111 and one GxC; GxC 215 - are tolerant to the wasp. These tolerant clones can only be produced by licenced nurseries.

A team of scientists from FABI under the leadership of Prof. Wilhelm de Beer hosted the first workshop in Africa focused