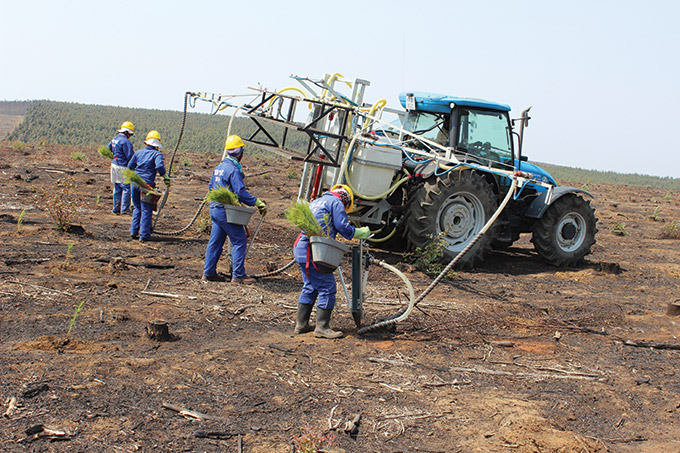 The KISS planter swings into action. The tractor carries the gel and seedlings, while the planters carry just a planting tool and a tray of seedlings fastened to their waists.

“Simple, reliable, easy to maintain … effective!”  This is how silviculture contractor Jabulani Shange describes the tractor-driven boom planter developed by the Midlands Spraychem team, that he has on trial in the KwaZulu-Natal midlands for the past few weeks.

Jabulani first saw the so-called KISS planter in action at a Mondi field day held at Hilton in February, and decided to give it a try.

It is a simple, light-weight boom hitched to an ordinary agricultural tractor that carries an 800 litre tank of water or gel, delivered through four planting tubes attached to nozzles on the boom. The tractor moves down the line at a slow walking pace, with a member of the planting team at each of the four stations. Each team member carries a simple, hand-operated planting tool. At their waist is a tray with the seedlings, which are simply dropped one at a time into the planter.

The seedling is inserted into the pre-prepared pit through the beak of the planting tool along with a pre-determined application of water/gel, usually 500 – 700 ml. The planter covers the root plug with his/her foot, and moves on to the next pit. No need to bend, no heavy loads, no stop-start. The system flows seamlessly, but the pits need to be well prepared and the team needs to be working in sync. A supervisor walks behind the planters, making sure that each seedling is perfectly placed and secured in the pit.

The tractor carries enough water/gel to plant  1 000 seedling before it needs to be re-charged.

Jabulani is the Operations Manager for Sibuyile Investment (Pty) Ltd, a silviculture contracting business owned by the Isigedlane Community Trust.

The Trust owns 5 500 ha of farm land near Kranskop in the KZN midlands, which includes around 4 500 ha of eucalyptus, pine and wattle plantations.

The farm was formerly owned by Mondi and was transferred to the community in 2011 in terms of a land claim settlement.

Following its transfer to the community the farm was leased back to Mondi for a period of 20 years. Hence Sibuyile Investments has a silviculture contract with Mondi, and is required to meet Mondi’s standards of operation on the farm. 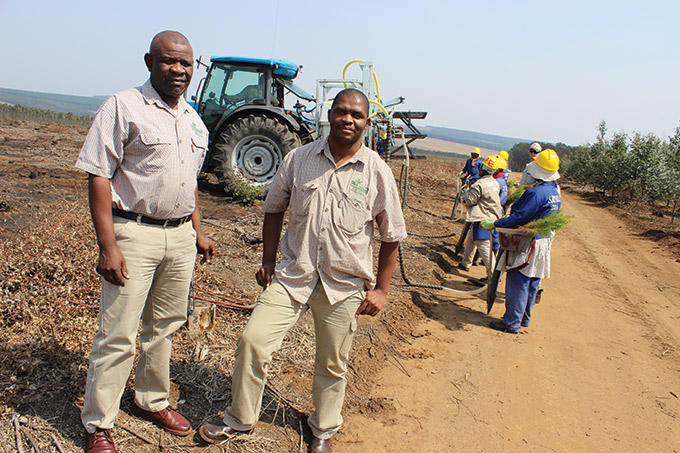 Planting programme
Jabulani told SA Forestry that he decided to try out the KISS planter as he felt it would help his team keep up with a tough planting programme, and he hasn’t been disappointed.

He said he planted 135 ha of pine in four weeks, right through the driest days of winter, with just 1% mortality, using a demo KISS planter supplied by Midlands Spraychem.

So happy is he with this system, that he has ordered one for his team, which is soon to be delivered.

“This system is working really well for us, it’s easy to maintain and it gives us the productivity we want,” said Jabulani.

Jabulani’s planting team is currently planting between 5-7 ha per day, using the KISS system. The planting team comprises just five people (four planters and a supervisor) plus a tractor driver. 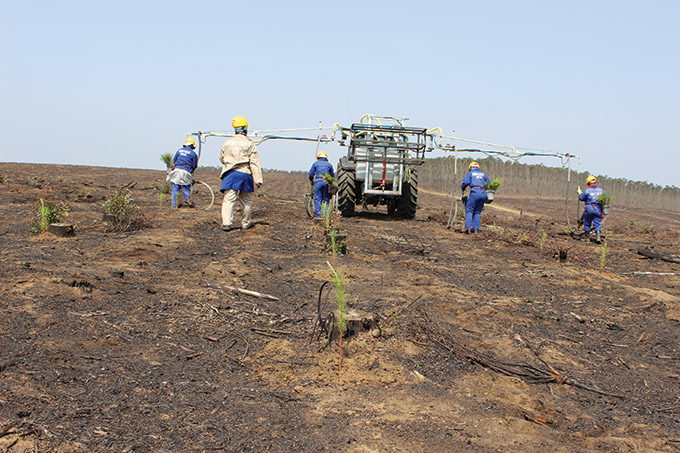 The view from behind the KISS planter, with the seedlings sitting snugly in the ground.

When he was still doing this job manually, he employed a team of 20 planters to achieve similar productivity.

Jabulani says he regrets the loss of jobs, but says modernizing his forestry operations is essential in order to remain competitive. He says Mondi has been putting pressure on contractors to modernize their operations, with the biggest benefits being the health and safety of the field workers.

Planting by hand is a tough job that is hard on the bodies of workers. The KISS system takes the weight of a backpack filled with water/gel off their backs, and eliminates the need to stoop and bend.

Alasdair MacKenzie of Midlands Spraychem says that all the equipment has been designed in close collaboration with growers and contractors to ensure that it meets the highest standards required by the industry in terms of reliability, health and safety, quality of planting and productivity.

A key aspect of the KISS system for Jabulani is its versatility. In addition to planting, the boom can be used for doing a pre-plant spray, or a maintenance spray with a windbox, lance or dribble bar. He says it meets all of Mondi’s health and safety requirements, and can be used up to a 190 slope.

He says the boom can be hitched or un-hitched from the tractor in 10 minutes if the tractor is needed for another purpose.

The hand-held planting tool has evolved through extensive R & D. Alasdair says that when operated correctly the beak places the seedling securely in the pit, with no air pockets or J-rooting.

Of course it is important that the pits are properly prepared before planting. Jabulani’s pitting team are currently using STIHL augurs to make uniform pits 20cm wide by 25 cm deep. 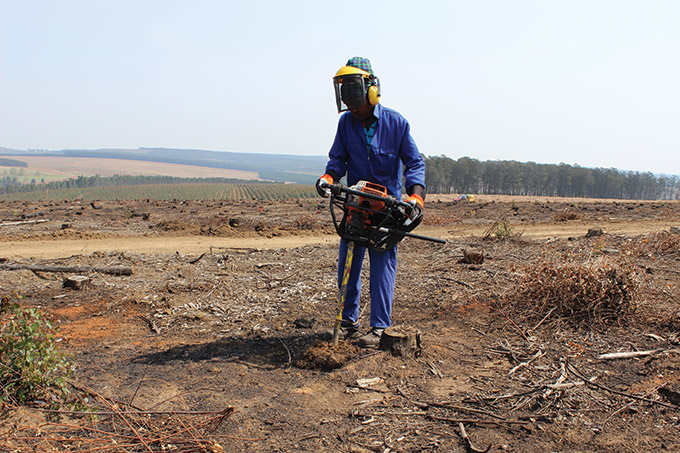 The pits are prepared with an augur.

Suppositree
Jabulani will also trial a tablet to be used at planting, developed by Midlands Spraychem specifically for forestry. It is a small brown tablet which provides safe and efficient dosing of insecticide and fertilizer to the seedling and surrounding soil.

The tablet, known as a Suppositree, is dropped into the planting tube before the seedling is dropped in and inserted into the pit. The tablet is therefore ideally located just below the root plug, providing a slow release of insecticide and fertilizer.

The placement of the tablet at the root plug maximizes the fertilizer usage by the plant. The insecticide controls ‘chewing’ and ‘sucking’ insects that may be present in the soil including white grub, cutworm, termites and bark beetles.

SA Forestry visited a trial compartment in the midlands planted with eucalyptus in February this year, using the Kiss planting system. A Suppositree tablet was planted with each seedling.

The trees appeared to be very strong and healthy, showing excellent growth in the seven months since planting, especially considering the dry conditions that have been experienced over this period. It was obvious that very little blanking was required in this compartment.

The Suppositree provides a simple and effective, one-stop solution to the application of fertilizer and insecticide to planted trees. 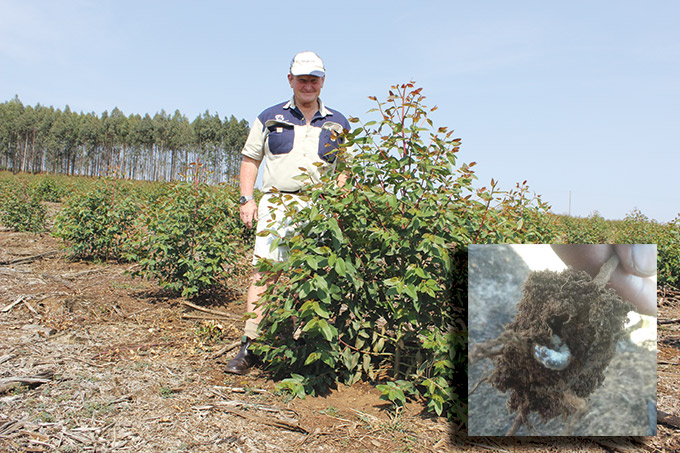 Alasdair Mackenzie of Midlands Spraychem, happy with the growth of these eucalypts planted seven months earlier by way of the KISS system with a Suppositree tablet included. The Suppositree provides the growing tree with slow release fertilizer and insecticide which is an effective deterrent of sucking and chewing insects in the soil, such as this white grub (inset).

Forestry experience
Jabulani has a wealth of forestry experience behind him, and is relishing the task of providing silviculture services to the farm that has been restored to his community through the land restitution programme.

Jabulani’s involvement in the forestry sector dates back to 1977 when he started working for NTE as a clerk. He soon got involved in the operations side of forestry, and worked for Mondi for 23 years, finishing his career as a senior forester. He has been contracting for Mondi since 2000. 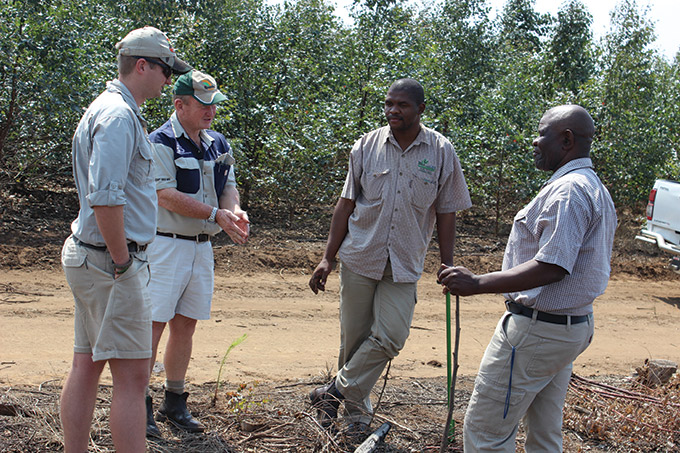 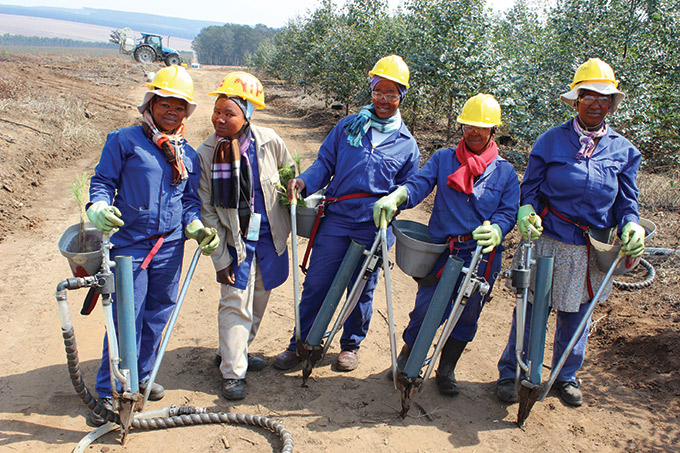 The planting team with supervisor Zinhle Dladla (2nd from left).