Home » Modernisation of silviculture is imminent and unstoppable

Modernisation of silviculture is imminent and unstoppable 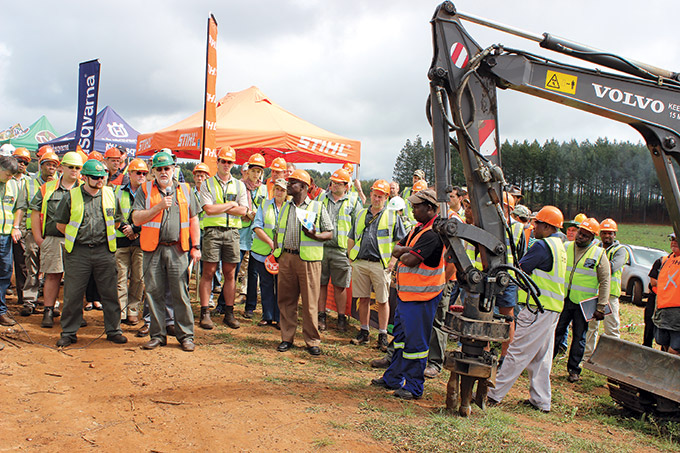 Jaap and Helgaard Steenkamp present one of their pitting machines at a field day in Mpumalanga.

Sound scientific silviculture forms the basis of future yields. For many years silviculture was a traditional activity with virtually no development and innovation. The forestry industry – by region – had their way of doing things and this was perpetuated for many years.

However we are living in a changing world regarding demographics and climate, and forestry is subject to these changes.

Over the past decade the dynamics of labour markets, the ability and preparedness of people to do manual silviculture and climate change caused a new emphasis on silviculture. Foresters realised that silviculture is the next area for quantum development in forestry.

From a scientific point of view, the view is upheld that initial silviculture practices have a small influence on final yield. This being said, it cannot be denied that stocking (final crop) and the health of trees are important and will influence the final yield somehow. A more important factor is to ensure that seedlings get planted despite many constraints of which labour and climate are very important.

Silviculture around the world
I have had the privilege of looking at silviculture in Europe, Australia, South America and obviously South Africa. In all these countries, mechanisation of operations was done through adapting agriculture and construction equipment and applying it to silviculture. But these practices cannot be described as modern, dedicated, silviculture operations.

The low availability of labour and high labour cost is prohibitive in some countries, especially in Australia where it is virtually impossible to source silviculture workers. In some cases ‘backpackers’ are used for planting work. The quality of such operations is poor.

In some places in Australia the perceived planting window is extremely short and growers are geared to plant in this narrow window. Contrary to this practice, in South America, planting happens continuously and re-irrigation is scheduled up to five times during adverse weather conditions. Some areas in Brazil are only populated by one person per 40 square km. It is thus a huge problem to source forestry workers and every little thing that can be mechanised, is mechanised.

In many areas old stumps dating back five rotations are still visible, impacting on silviculture practices. Managing residue and stumps is an energy hungry activity, and we all know that fuel usage per ha is a good cost and environmental (through emissions) indicator. We need to manage residue and stumps as cheaply as possible. Different regimes of mulching are adopted, large V-blade bulldozers with heavy plough implements are also employed in some instances. It is just a fact that, at some stage your compartment ‘fills up’ and you need some space for new plantings.

It’s a fact that planting by hand is inaccurate. It tends to ‘fill up’ an area quicker than a precision planting operation – which means increased cost! If we can prepare a table top every six rotations rather than every four rotations, there is already a significant saving as total costs are spread out over a much longer term.

Once a compartment is prepared as a table top through precision planting, the next rotations can be planned to optimise space utilisation. A precision operation where every seedling is GPS referenced, makes secondary mechanised activities like re-irrigation easy as it can be done with a machine and a single operator. A modern operation will also be characterised by modern data feedback, precision and repeatability of mechanised operations.

Integrated planting
The general trend for planting is to move away from separated activities to a more vertically integrated system. The existing systems will in general integrate up to three activities. The ideal is to achieve a fully integrated operation where the pitting, planting, fertilizer application, pre-emergent spray, irrigation and firming up of the seedling are integrated to ensure the highest possible quality and precision of establishment.

This can be achieved with spot cultivation, but it is more of a challenge for continuous (strip) planting. In the integrated planting process, the seedlings are retained in the seedling trays and are exposed outside the tray for less than 15 seconds. The seedlings can be kept at optimum moisture level on the planting equipment to virtually eliminate any transplant shock.

All other aspects, fertilizing, irrigation, weeding and even firming up can be done optimally, as determined by management. Fertilizer and irrigation efficiency are also significantly improved in the modern planting process. A higher output from fewer inputs translates into improved efficiency and eventually improved profitability.

The latest trends in silviculture are focused on using less people as silviculture experiences a labour vacuum, it also focuses on mitigating climate change and stretching planting windows (irrigation) and it focus on precision (quality) and mechanised repeatability of activities.

It is important that academic institutions should stay up-to-date with these developments and teach accordingly, as it is clear that most people are resistant to change and prefer to stick with tradition and convention. Yet the modernisation of silviculture is imminent and unstoppable.