Home » From axe to chainsaw and everything in between

From axe to chainsaw and everything in between 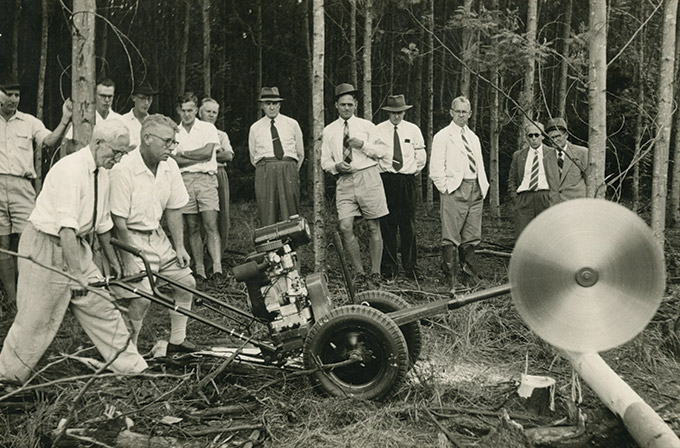 The earliest harvesting foresters on record were cave men. We know that because they left the coals and ashes of timber (carefully extinguished, of course) on the floor of the cave for us to check a few hundred thousand years later. Being ecologically sensitive and mindful of global warming, they used only the dead trees that had fallen down (although that might have had something to do with a lack of equipment like axes and chainsaws).

However, as the millennia rolled by, their research departments came up with the idea of a stone, shaped to penetrate wood when struck. A bit of progress. A few more millennia, and the boffins brought out an innovation that was to endure, essentially in its original form, all the way to today – the iron axe. It was in a different class from the stone axe, and became the equivalent of today's Multi Tool, ideal for the kitchen, workshop, cave, garden and DIY types. Attaching a longer handle adapted it for military use in disputes over harvesting concessions with cheeky cave dwellers on the other side of the valley. There is no other industry that can boast equipment with a pedigree like that. Perhaps that's why we are sometimes called cave men?

Felling techniques
The 1960s saw the transition from axe to chainsaw. The felling techniques for a chainsaw being essentially the same as for an axe, the operators had little difficulty adapting. Between axe and chainsaw, however, came an experiment with the Lowther saw of the 1940s. This was a two-wheeled, self-propelled circular saw blade on a frame, steered by means of handles like a wheel barrow. The blade was at the front, driven by multiple belts, and could rotate to the vertical position for cross-cutting. It could be described as the fore-runner of today's brush cutter, and it was downright dangerous for felling, there being no means of controlling direction of fall. It was heavy, and suitable only for flat or gently sloping terrain. It cut very fast, though, and was popular for a while in America. Chainsaws soon displaced it.

I have a few pet hates involving chainsaws: high on the list is gratuitous revving. One of the names for this machine in Zulu is 'bem-bem', which very accurately describes this wasteful practice. My observation is that the majority of operators are guilty of it. A properly tuned engine with a well sharpened chain does not need to be revved before being placed on the log for a cut. Revving between cuts adds at least 25% to the fuel and oil bill, and a lot of completely unnecessary wear to every single component. If the engine cuts out, tune it!

Another is a poorly sharpened or blunt chain. A really well sharpened chain lowers fuel usage and wear and tear, saves time, and reduces operator fatigue.

A slack chain is dangerous. At best, it causes serious wear, expensive damage and downtime. If it flies off the bar at a crucial moment, control of the fall is lost, and people get hurt. 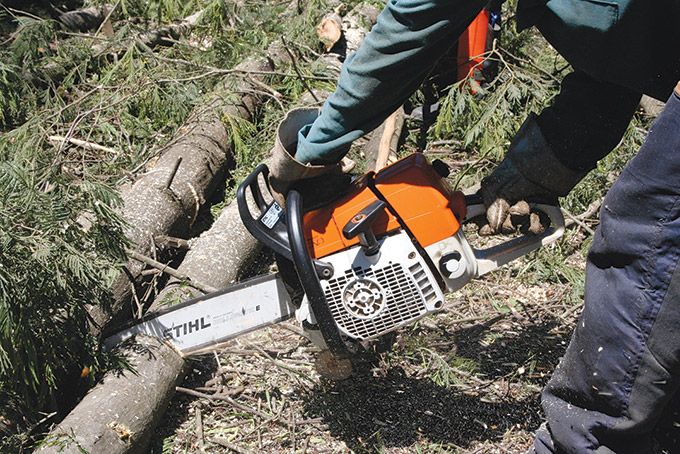 The modern chainsaw revolutionised timber harvesting. It’s called a ‘bem-bem’ in Zulu, named after the habit of many operator’s to rev their saws between cuts – an unnecessary waste of fuel, not to mention wear and tear!

Protecting the ‘pusher’
And the so-called 'pushing stick'. A chainsaw assistant helping the directional felling (which theoretically should not be needed) by applying pressure with his hand on the tree is in danger of instant amputation if things go wrong. The pushing stick theoretically keeps him away from the spinning chain, but sticks have a tendency to slip on the bark, which can cause the pusher to fall forward onto the saw.

My design is a half-inch galvanised pipe with a pistol grip at the end and another at about half an arm's length. The business end is a large nut welded to the pipe, filed into multiple points that bite into the bark, making it non-slip. It is 2.4m long, which keeps the assistant well away from danger, and is the measure for the pulpwood marking stick.

One operation that didn't need a pushing stick was felling 40-year-old eucalypt windbreaks at Weza many years ago. Butt diameters were about 180 cm, some of the branches the same diameter as an eight-year old gum. Using geared McCulloch saws with 36-inch bars, the output was five trees per day per team of eight. Cross-cutting 1.2m lengths was from the thin end, diameters above 75cm being impossible to handle and too big for the pulp mill. Spiral grain on much of the timber limited how much could be put through the splitter, as it would break the blades.

Dynamite experiment
To increase recovery, we tried an experiment with dynamite. Holes were drilled in the logs, and we engaged the services of a blaster, who arrived in a beat-up bakkie, dynamite and things in apparent confusion on the back. Now, this was happening in a cleared area, and a couple of hundred yards away was a troop of baboons happily gambolling and barking in the plantation. The dynamite was wired up in the logs, and detonated with an almighty bang which I didn't observe because I was watching the baboons; they probably took less than an hour to reach the coast 100 kays away! The experiment results? Not up to expectation – chunks of wood looking like porcupines, and incomplete splitting.

Incidentally, the various white gums from those windbreaks were used by Masonite to make softboard for ceilings in those days, because the red pigment in Grandis tinged white paint a delicate pink. One other thing I remember from that day was leaning against a tall dead pine, and idly rocking it; it broke half way up, sending five metres of tip like a spear to bury itself, still upright, at my feet …