Home » A forester's guide to the aliens among us

A forester's guide to the aliens among us 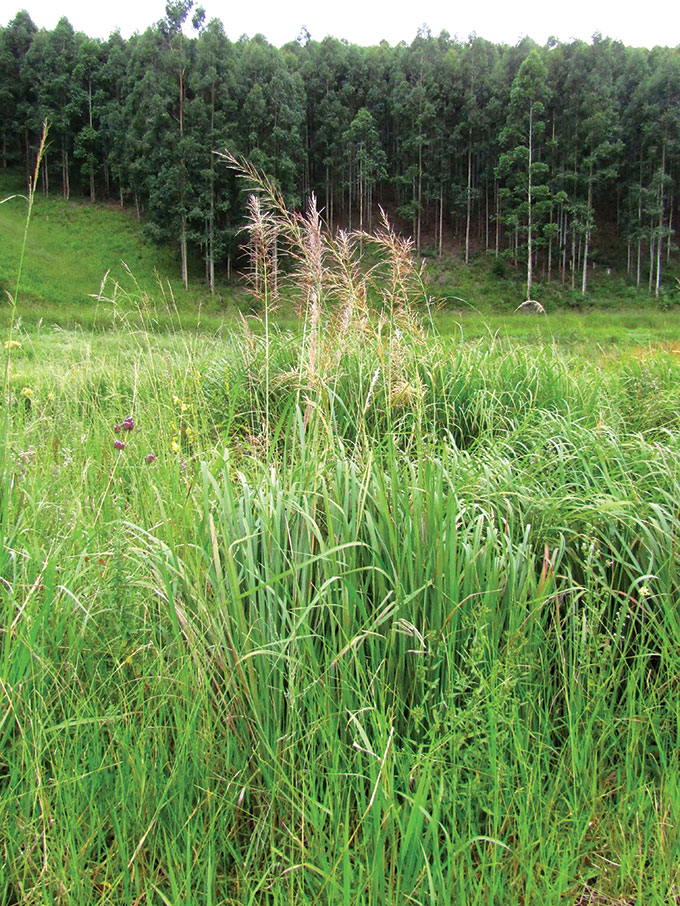 This is what Paspalum quadrifarium looks like up close. It’s a Category 1a invader.

Alien and invasive species are those organisms that occur in areas geographically distant from their native environments, where they can have negative impacts on the recipient environment.

They are also challenging to manage and can have significant negative ecological and economic impacts (Van Wilgen and Wilson 2018). In South Africa, these species are monitored and regulated under the National Environmental Management: Biodiversity Act (NEMBA) and the Conservation of Agricultural Resources Act (CARA), where species are recorded and categorized according to their impacts on the environment (Table 1). The impact of an alien and invasive species is determined by its ecology and its responsiveness to the recipient environment, as well as its ability to compete with other species within the environment. These factors influence the ability of the species to establish, naturalize and spread (Blackburn et al. 2011).

Table 1: An explanation of the different categories of alien and invasive species, following the National Environmental Management: Biodiversity Act (2004), Alien and Invasive Species Regulations of 2014. 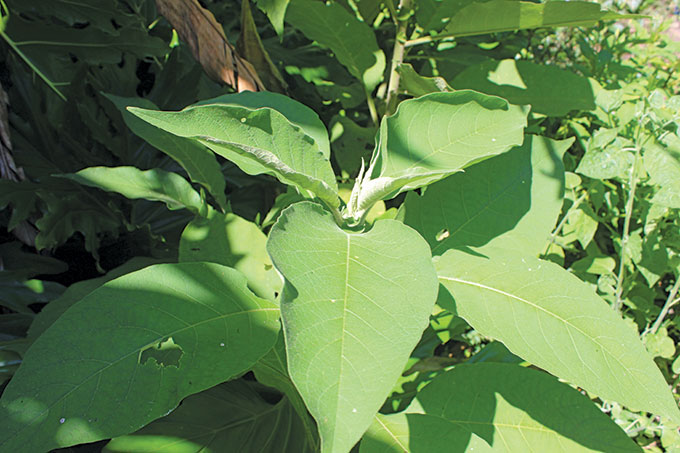 Actual alien and invasive plant species data
There is a total of 893 alien plant species in South Africa, which include 511 unlisted species (Van Wilgen and Wilson 2018). It is interesting to note that a local forestry company’s 2018 alien plant assessment recorded a total of 192 species on their plantation holdings in the KZN Midlands and Zululand. This included 36 species that were not listed in either CARA or NEMBA. Unlisted species were monitored proactively, because the majority (26 species) of these unlisted species were considered ‘invasive’ in South Africa (http://posa.sanbi.org/sanbi/Explore). Of the 154 NEMBA listed species in the 2018 alien plant assessment, 117 species were in category 1b and so should be actively controlled. The definition of ‘control’ in NEMBA is firstly, to combat and eradicate alien and invasive species. Where this is impossible, the aim of control is to prevent, as far as is practical, the recurrence, re-establishment, regrowth, multiplication, propagation, regeneration and / or spread of such species.

In addition, there were two species listed as NEMBA Category 1a, which means that ‘immediate compulsory control’ is required, as eradication is still (perceived to be) possible. The two species were Mauritian hemp (Furcraea foetida) and Tussock paspalum (Paspalum quadrifarium). Mauritian hemp only spreads vegetatively – by forming thousands of tiny plantlets in the flower cluster, which then fall to the ground and root to form new plants. Hence, its occurrence is localized, and eradication is possible, albeit still difficult. However, Tussock paspalum is a whole different kettle of fish, as it is a seed dispersed grass that flowers and seeds twice per year. This is apart from lateral vegetative spread of grass clumps from rhizomes, once it is established. It already occurs extensively inside conservation areas among timber compartments. In Australia, where it is also a major weed, it is treated with herbicides (Glyphosate 360g/L and Flupropanate 745g/L). However, there are ‘no herbicides registered for this species in South Africa’. In fact, the recommended eradication technique is uprooting individual tussocks, which is a logistical nightmare when the operation needs to be carried out at landscape spatial scale. 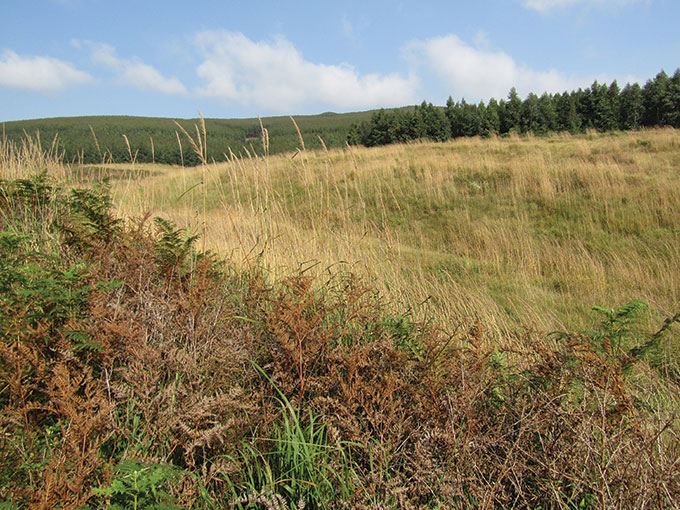 The tall dry grasses are Paspalum quadrifarium, a Category 1a invader that necessitates immediate and compulsory eradication. SANBI requested that sightings of this species be reported to their Early Detection and Rapid Response unit (invasivespecies@sanbi.org.za). Photo credit: Rick van Wyk.

The top 10 alien invaders
Almost half of the species in the 2018 Alien Plant Assessment occurred at fewer than 10 localities. Moreover, the 10 most widespread alien plant species accounted for just a little over 60% of all sightings.

Poisonous alien plants
Alien plants have a number of weapons up their sleeves to successfully invade novel ecosystems, which include their superior competitive abilities and staggering numbers of seeds produced annually. In the light thereof, we probably should not have been surprised that some of them became rather innovative in their invasion strategies … chemical warfare. Who would have thought? And who would have thought that this invasion strategy is so common among alien plants? Fifty-seven (57) poisonous species in the 2018 alien plant assessment according to  www.invasives.org.za. Toxic. No. Evil! 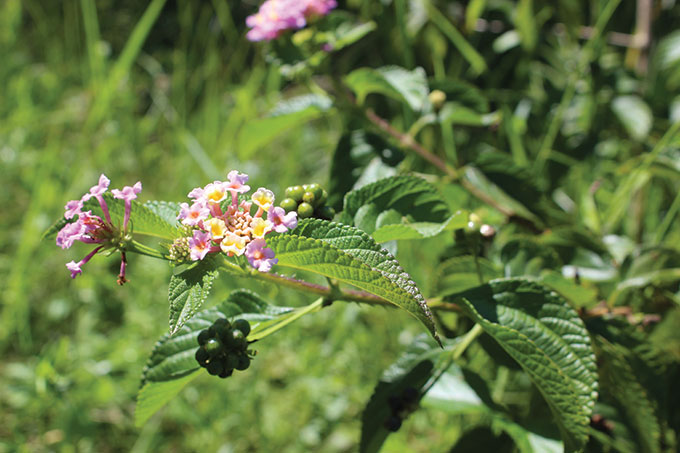 This is for all levels of toxicity (varying from a mild stomachache to death). Also, keep in mind that the difference between labelling a species as ‘medicinal’ or ‘poisonous’ is often just the dosage. A specific toxin might also affect only certain taxonomic groups. For example, Purple top (V. bonariensis) is poisonous to livestock, but is a sought-after nectar source for butterflies. Conversely, Ageratum (A. conyzoides) is poisonous, and the specific toxin acts as an insecticide. The unripe fruit of Bugweed (S. mauritianum) is poisonous, but ripe fruit are a popular food source for birds. Lantana (L. camara) is extremely poisonous to humans and livestock, especially cattle. Goats and sheep are generally not poisoned by Lantana, presumably because they are more selective feeders. Nevertheless, a mere handful of dried leaves can be fatal, and the annual loss of livestock due to Lantana poisoning is enormous.

Unlike Lantana poisoning, which is treatable with activated carbon, there is no known cure for exposure to Famine weed (Parthenium hysterophorus). Patients exhibiting symptoms are urged to leave the area, and managers are tasked with its eradication using Metsulfuron methyl, the active ingredient of Brush-Off. Famine weed is a serious irritant of human and livestock skin as well as respiratory tracts, causing dermatitis, asthma and allergies. Moreover, Famine weed toxins are transferred from the meat and milk of livestock to humans where it can cause further damage. Animals will avoid Famine weed, if given a choice. However, in an experimental trial (for which we would love to see the ethical clearance), feeding Famine weed to bull calves caused their death, and an autopsy revealed acute damage to the liver, kidney and skin.

Triffid weed (C. odorata) is also poisonous to livestock, but an arguably bigger economic concern comes from its many volatile oils that allows its stems and leaves to burn extraordinarily hot. 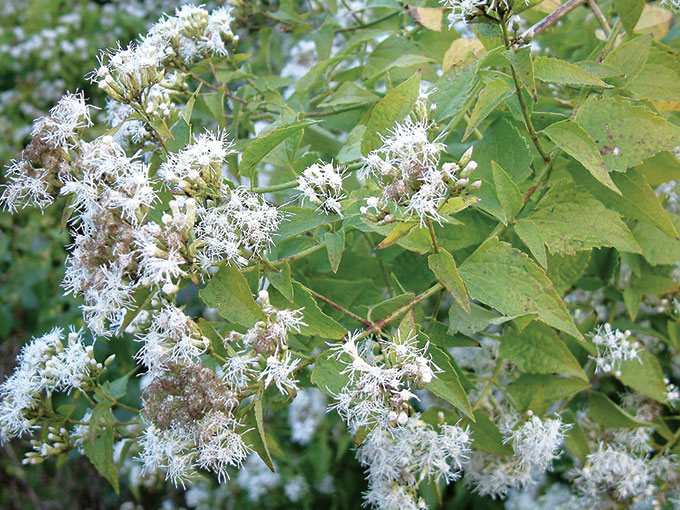 Allelopathic alien plants
Chemical warfare is not a strategy only used by plants to deter ANIMALS, but also other PLANTS. ‘Allelopathy’ is the term given to the phenomenon where a plant species release chemicals (into the air or into plant tissue) to suppress the growth, reproduction and germination of other plant species. It is a strategy used by alien plants to engineer their novel ecosystems exactly to their liking… without neighboring plants to keep an eye over the new kid on the block.

We’re sure there is a collective memory of ‘dew’ that eucalypt trees secrete to suppress undergrowth. This is a good example of allelopathy. In addition, there were 44 other species from the 2018 alien plant assessment with allelopathic effects shown in a soil-based environment (in the field or in pots in a greenhouse). Strong allelopathic effects were from Blackwood (Acacia melanoxylon), Famine weed, Gum trees and Lantana. Note how some of these plant species’ names surface again and again, with every new defensive or offensive invasion strategy. They literally enter novel ecosystems with all guns blazing. 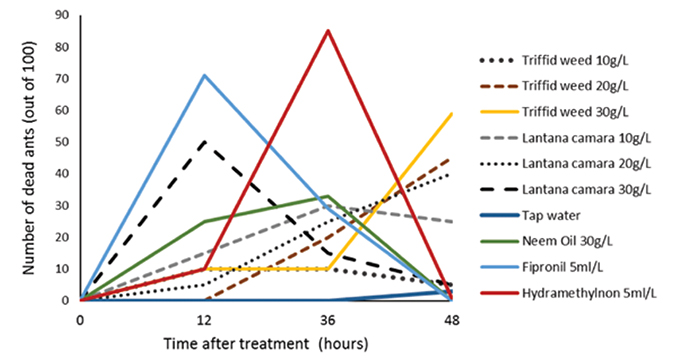 Control of alien plants
The key to successfully control alien plants is strategic hard work. Formulating this alien control strategy is a science in itself, and need to be fine-tuned for each specific area and sometimes even specific species.

Here are a few practical guidelines.
1) Keep your CLEAN AREAS CLEAN, and get alien plants in follow-up compartments under control before embarking on new missions in more densely infested areas.
2) Get control over the other disturbances in your system, because EVERY BARE PATCH IS AN INVASION OPPORTUNITY for alien species.
3) Clean catchment areas from the TOP DOWN. Ninety-six percent of species in the 2018 alien plant assessment were seed dispersed, and rivers effectively disperse seeds downstream.
4) EFFECTIVELY CONTROL alien plants in conservation areas and adjacent timber compartments to prevent spill-over and re-invasion of cleared areas.
5) USE FIRE actively and wisely in alien plant control, as it is your cheapest treatment. Thereafter comes herbicide spraying and then cut-stump applications at the greatest expense.
6) KNOCK THEM DEAD WHEN THEY ARE FLOWERING, as this is when plants’ defenses are at their lowest. This specifically applies to American bramble, Famine weed, and Pompom weed (Campuloclinium macrocephalum).
7) REPORT ALIEN SIGHTINGS on www.inaturalist.org, and share sightings with the ‘Invasive (s Afr)’ project. This builds the knowledge basis of alien species, which is very much needed. We just do not know how big the problem is, or even where the problem areas are. According to public platforms, Forest Inkberry (Phytolacca octandra) is only a problem in the Western Cape, which is obviously not true.
8) STAY ABREAST WITH NEW CONTROL STRATEGIES. A recent article published in SA Forestry challenged the traditional way of controlling Bugweed, with great successes at lower costs. (Title: The great bugweed debate: To clear or not to clear.)
9) Keep a lookout for NEW TECHNOLOGIES to help control aliens. Underwater drones with facial recognition software and a self-learning algorithm are being tested for the control of invasive starfish on the Great Barrier Reef, Australia, by injecting them with bile. Yes. The stuff produced by your liver and stored in your gallbladder. Granted, there are concerns about letting lose artificially intelligent killing machines…
10) Keep a lookout for ALTERNATIVE USES for alien plants. Invasive alien plant species are used extensively for medicinal purposes in rural South Africa as well as abroad. In Bangladesh, 39 invasive plant species were used to treat 37 ailments, ranging from headaches to heart diseases. Furthermore, emerging research from India and Brazil points to Lantana camara as the next miracle to hit the world of medicine, notably in the field of antibiotics. Alien invasive plants as botanical pesticides is another avenue that is being explored by Palesa Mothapo and her colleagues from the University of Lagos, Nigeria. They tested the efficacy of different concentrations of Triffid weed and Lantana leaf extracts as pesticides, by spraying it onto ants in petri dishes (see graph on previous page). Although not as effective as commercial pesticides, Triffid weed showed great potential, as it only killed ants after they have had the opportunity to return to their nests. Why kill only one, if you can kill the whole nest? With the world refocusing on organic food production, botanical insecticides may be more needed in organic pest management practices.