Home » Bell T17s do the hard work for Can Do Timbers

Bell T17s do the hard work for Can Do Timbers 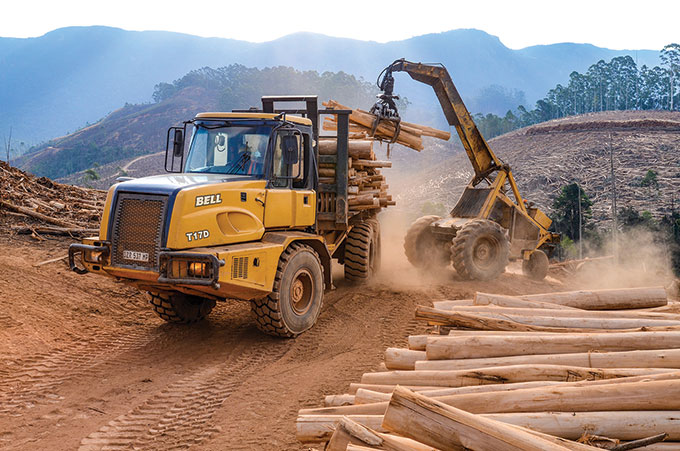 The Bell T17 Articulated Timber Trucks to do the short haul in the rugged Mpumalanga Lowveld.

Bell Equipment’s Articulated Dump Trucks have been designed and built to withstand the rigours and challenges of working in some of the toughest conditions in the world. Since those same design parameters have been built into the Bell T17 Articulated Timber Truck, it’s fair to say that with regular maintenance they will prove to be just as tough and durable.

This has certainly been the experience that Cassie Greyling and his company Can Do Timbers have had ever since they bought a fleet of Bell T17 Articulated Timber Trucks to do their short haul in the rugged Mpumalanga Lowveld.

Can Do Timbers was founded in 2004 and the company has grown to become a major contract timber harvester for some of the largest timber growers.

“We’re currently felling, extracting and doing short haul on mainly Eucalyptus compartments in two areas, one near Graskop and the other near Barberton,” Cassie explains. “Some years ago, we did our planning so that we have a 60:40 split in favour of mechanised harvesting.”

Manual harvesting system
Can Do Timbers started out with a small team of people harvesting manually, and Cassie is still committed to this system as he believes the company has a role to play in creating and sustaining employment.

However Can Do Timbers also has clients who have huge demands for their product, hence their increasing mechanisation.

Can Do Timbers has a long association with harvesting and timber handling equipment manufactured, sold and maintained by Bell Equipment. The company deploys Bell 125 and Bell 225 Crank Boom Loggers, a John Deere 759 Harvester with a Waratah HTH616 Harvesting Head, a John Deere 1710D Forwarder and John Deere 540G Cable Skidders.

All this equipment can fell and extract timber to the roadside. Moving the timber to manageable depots where it can be loaded onto interlinked rigs for long haul remains a challenge, especially in areas with extreme inclines and slippery underfoot conditions found around Graskop and Barberton. High annual rainfall of up to 1 100mm makes this ideal terrain to grow timber, but also causes dangerous conditions on gravel roads. 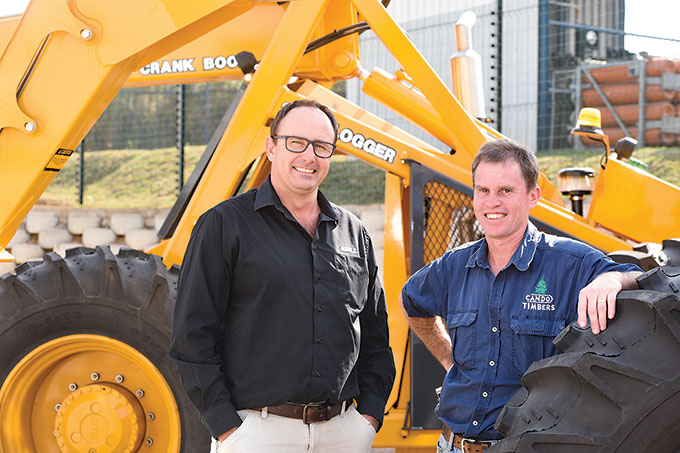 26 000 hours
“This fleet had done high hours of between 26 000 and 30 000 but came with many spare components, engines and differentials. We’ve subsequently reduced our fleet to five which gives us the handy option to always have one truck as a spare should one need attention or servicing.”

Cassie lauds the design and build of the Bell T17 Articulated Timber Truck. With the trucks in his fleet now having worked for between  50 000 and 60 000 hours, he and his team of six qualified mechanics have not picked up any cracks or signs of wear in the truck chassis.

“The Bell T17 Articulated Timber Truck doesn’t have a normal suspension but a walking beam which absorbs much of the shock of the challenging roads we haul the timber on,” explains Cassie. “However, the big advantage for us in getting the timber safely to the depots is the braking system on the Bell T17, which negates the steep declines where we carry full loads of up to 16 tonnes.

“The truck has two built-in retarding systems which are automatically activated every time the operator takes his foot off the accelerator. The first is an engine braking system through an exhaust brake flap and an exhaust valve brake; and the second is a transmission retarder, which has a torque converter that operates in reverse to slow the truck down. The operator can set the retarder strength.”

Should there be an engine failure, the emergency steering hydraulic pump will aid steering and braking, says Cassie.

Manoeuvrability
Another advantage is their manoeuvrability around tight corners where space is restricted, and the truck’s ability to tip its load reduces cycle times.

“Sustained mechanical availability should however never be taken for granted and we ensure that our operators, who generally drive for around eight hours in a ten-hour shift, diligently work through their daily checklists to ensure the trucks remain in good mechanical condition. Our own team of mechanics know these trucks intimately and ensure their uptime remains high.”

Can Do Timbers also run a Bell T302 Timber Truck, which has the added advantage of its own crane for loading and unloading.

If you liked this article check out: Matriarch takes forestry conversions to a new level