Home » The role of cattle at Lion Match Forestry

The role of cattle at Lion Match Forestry

SA Forestry Magazine was invited to visit Lion Match Forestry's beautiful Clifton estate near Lothair in Mpumalanga to meet their new weed control team. They're black, white and brown, the only fuel they need is grass, and they multiply without interference from anyone. It all sounded too good to be true, so we took the long drive to Sihanahana to check the facts. 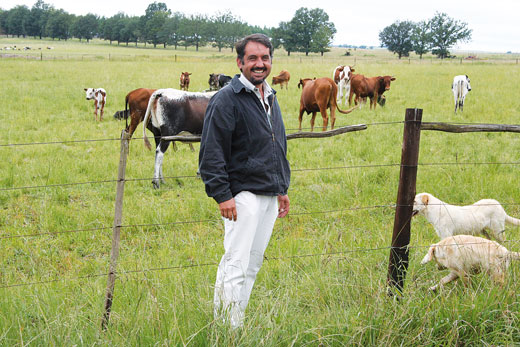 Lion Match Forestry's chief forester, Eugene Kraamwinkel, talks cattle farming almost as passionately as he talks forestry. Some three years ago he decided to try using cattle to control the grass and weeds that grow between the trees on the company's Mpumalanga estates. The wide open espacement of the Lion Match plantations is designed to encourage the growth of big, tall trees suitable for the manufacture of matches, but this also allows in a bit of sunlight which encourages the growth of grasses and weeds.

"We do a nine-metre pruning and harsh thinnings to get veneer-size logs as quickly as possible, so we open the canopy and let sunlight in, which encourages the weeds and grasses to come up," said Eugene.

The pine compartments are planted at 1 333 stems per hectare, and thinned down to 280 SPH. After considerable research, Eugene decided to experiment with Africa's indigenous Nguni cattle because they are hardy, they calve unassisted and they pick up weight quickly. And because they're low intensity feeders and a bit smaller, they need less land than most other breeds to remain healthy and strong. Eugene describes them as "low maintenance cattle".

Starting off with 10 head, he has built the herd up to 107. When SA Forestry magazine visited they were grazing happily in the unplanted areas at Clifton. Just before winter, when the ground is starting to dry out, they are moved into the plantations (both poplar and pine) to graze between the trees. This is the only time they need to be minded by the labour, and this continues right through winter. The cattle are only used in compartments after the trees have received the first two-metre pruning at four years.

Eugene says that the cattle keep the grass short and eliminate most of the weeds, like blackjack and wattle. The labour just has to go in and clean up the odd bugweed after the cattle have done their job.

So effective are the cattle, that Eugene says they saved R194 000 in grass cutting expenses alone last year. An additional benefit is that they trample all over the brushlines so they break down faster, thus helping to reduce the fuel load in the compartments.

The Nguni's require little maintenance, and calve once a year. They sell the excess bulls, but keep the cows. They don't have to feed them through the winter, but do supplement with bales in the kraal at night. They normally move them from estate to estate by truck, but last year there were no trucks available and so they walked the entire herd from Witbank to Clifton – a distance of 40 kms – in one day. Eugene said the cattle handled it easily, and some of the cows gave birth the very next day.

He says they're now experimenting with Nguni-Jersey crosses to see if they can also get some milk from the cows.

Eugene is responsible for the forestry operations at all Lion Match plantations. There is 1 300 ha on the farm Witbank near Sheepmoor, 2 100 ha near Lothair on three estates, Clifton, Sandcliff and Frere and 1825 ha in the Umvoti area near to Greytown. In addition there are some 400 hectares of poplars on small stands at Sheepmoor, Piet Retief and in Greytown in the KZN Midlands.

The pine species used are Patula, Eliotti and Gregii. The poplar makes the best matches, but they are being phased out because they only grow in the wet vleis where it's no longer allowed to grow commercial trees.

Contractors do all the pruning and harvesting, using a motormanual system (chainsaws and tractors). The last thinning is done at 19 years. Every seventh row is harvested to provide space for an extraction route. The two base logs from the last thinnings operation are sent to the match factory, and the rest is sold to pulp mills.

"We tried growing poplar under irrigation in dryer areas, but it wasn't successful," said Eugene. He says when planted in the right areas, poplar has extremely high growth and produces very clean timber with long fibres, ideal for the manufacture of matches. Poplars do not grow in winter at all, so there are no hard growth rings in the timber.

The Clifton estate, which SA Forestry magazine visited, is all pine. Some of the compartments were previously planted to gum. They are left for two years, and the big stumps removed with a stump grinder, and then re-planted with pine. They do a ring weeding and a line spray, and just keep the grass cut between the rows.

The pines are harvested at 25-30 years, and the poplar at 18-27 years. The harvested logs are transported to the match factory at Rosslyn, near Pretoria, where they are peeled in a lathe right down to a 10 cm core. The company has another match factory in Mozambique. According to Eugene, 125 tons of timber produces 50 to 75 tons of matches.