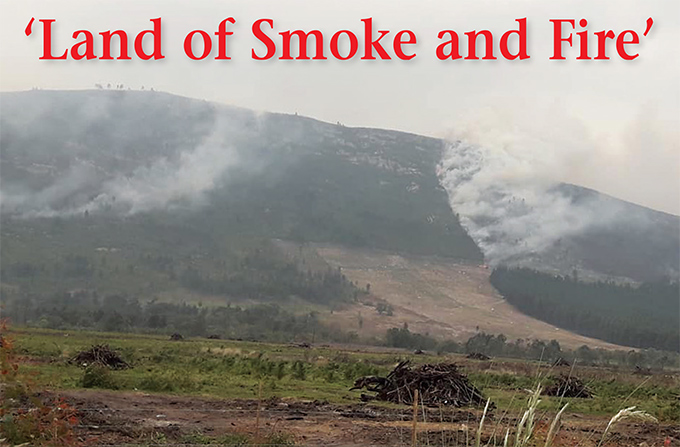 Extra wide fire breaks prepared beforehand enabled the AC Whitcher forestry team to do a back burn in howling winds, thus saving their Tsitsikamma plantation from the advancing wild fire.

This is a very comprehensive article written by Theo Stehle which not only confirms my fears about this ‘exit’ program, but I am now in a position to add much more evidence to this program as well as to the recent ‘return-exit’ decisions. I might have some reservations about a few issues, but it summarises a range of problem areas very well. If we disregard for a moment that climate change is having an added effect on the already-extreme fire hazard conditions, it is clear that the whole exit process has contributed significantly to the poor status of conservation in particular in the Fynbos biome in the Cape Forest regions as a whole. The result of this is a situation of total fire exclusion within this fire-dependant biome, with extreme mega wildfires already damaging this sensitive shrubland. This is now threatening the maintenance of biodiversity as a result of serious (long-lasting) damage to physical and chemical topsoil properties.

Handing over of exit areas
The handing over of thousands of hectares of commercial timber plantations mostly bordering or within the existing Fynbos shrublands, has added more dangerous fuels to the already-too-old Fynbos vegetation, so that we are now sitting with an explosive situation, which has already contributed to the worst wildfires in more than 100 years.

The forestry plantations suffered a similar plight, as ‘fire exclusion status’ was again being reached. This is regardless of the fact that both the Fynbos vegetation biome base as well as the introduction of exotic (mainly) Pine trees are known to be fire-dependant in South Africa as well as in their original habitat.

The answer was simply that selected prescribed fire should have been introduced to control fuel accumulation.

Burning experiments
The Department of Forestry was instructed to investigate in the Cape regions – as a matter of urgency – by the forestry department top management! I had the pleasure of conducting research for this project, which proved to be highly successful in a range of burning experiments, the results of which were mostly published. Sadly, the technique was never implemented in the Cape forest regions. Fortunately the forestry regions, in particular in KwaZulu-Natal and Mpumalanga, are now implementing the technique at an increased scale. Today a few thousand hectares of plantations are being treated by fire yearly, to be incorporated in regional buffer zones for fire prevention purposes, as well as for fuel reduction.

Coming back to the original exit decision, the existing MAI database (according to plantation working plans) was used to calculate which blocks were considered as uneconomical and which ‘made the grade’. However, vital site classification records and maps were not used, together with site-specific fertilizer experiment results which were never considered seriously to determine the actual MAI potential of the exit areas, particularly if considered with improved species choice, and site-specific silvicultural treatments which could improve sustainable timber yields.

Exit reversal
Agreed, these results were sometimes not officially published with some important exceptions, but this was a vital investigation which could have proved that there were sites which should never have been converted to Fynbos. The subsequent reverse exit confirmed that this shortcoming in this decision-making process was later realised. Now there exists no will, manpower or finance to make sure that this process is executed successfully, which is so important, to add plantation land to the forestry industry in the Cape Forest regions.

The regional, integrated, fire prevention improvement measures are sadly not even considered at the time of writing, regardless the threat that even worse wildfires can be expected to follow within the near future, as fire hazards continue to grow

Emergency situation
We are already in an emergency situation in the Cape Regions, so we cannot simply wait any longer before improved measures against future wildfires are implemented. Current and planned for measures are not sufficient.

The policies with regard to fire-use in Fynbos shrublands requires drastic restructuring, based on fire ecological principles as well as fire application scheduling and application.

We have to go back to the principles of block burning, but then in the form of a well-planned compromise between ecological rules and fuel management requirements.

Forestry under threat
My views with regard to the future Cape Forest Regions are that the whole forest industry is under threat, and we have to bring this to the attention of the authorities. Forestry in the region has the potential to become a profitable industry, and a vital source for future employment, running into thousands of sustainable jobs.

I have no doubt that this regional can become a real success story again, as it used to be only a few decades ago.

Plan one? Appoint a commission of enquiry to determine the problems and mistakes made, as well as the way forward, with recommendations drawn up to be considered at the highest level of Central and Provincial Governments.

Further action and communication channels should now be explored. Recommendations in this regard will be welcome.