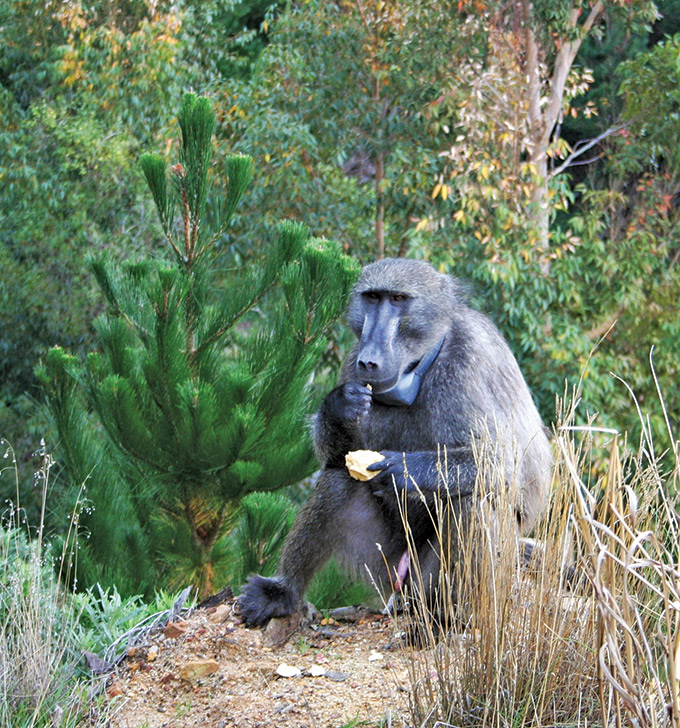 Baboon damage on pine trees in Mpumalanga is a growing challenge for timber companies.

As timber companies in Mpumalanga struggle to curb the damage being inflicted upon pine trees by baboons in the face of mounting public pressure, researchers are seeking answers and possible solutions …

Why do chacma baboons climb pine trees and chew the bark? Nobody knows for sure, but it is likely to be a combination of environmental factors and ‘troop-specific’ learned behavior. There is strong evidence to suggest that when baboons are under stress, or bored, they chew bark. It tastes nice, though its nutritional value may not be up to much. As the baboon population increases and troop territories overlap, the chewing – and the damage – intensifies.

It’s not unlike the behaviour of humans who need to smoke, eat sweets, chew gum or fiddle with their cell phones to help pass the time or calm the nerves. This is the view of renowned animal researcher Justin O’Riain of Cape Town University’s Baboon Research Unit, who is leading the research into baboon behaviour on behalf of the forestry industry.

The chewing severely damages the stem form of the trees and the quality of the timber, and in severe cases eventually kills the tree. The timber in those trees is unusable for sawing into lumber or for pulp.

As a last resort it may be utilizable as biomass for energy, but the value is low and the current marketable opportunities almost non-existent.

The losses are increasing, and the timber industry is investing in research to better understand baboon behavior and to find solutions to the problem which threatens the sustainability of their businesses. 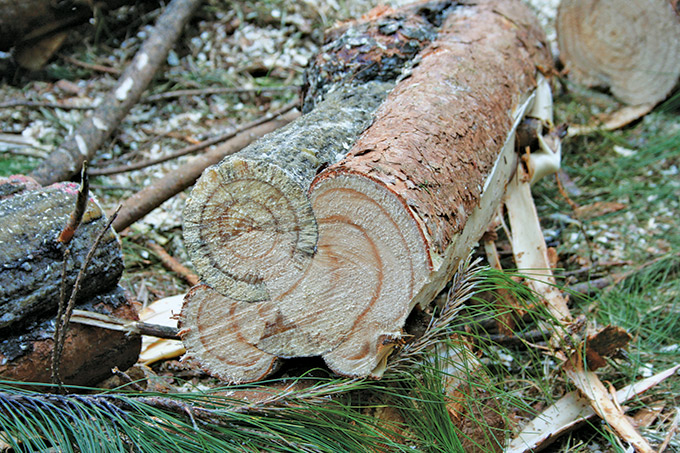 Baboon-damaged timber has little value as it is unsuitable for use as lumber or pulp.

In some pine compartments in Mpumalanga’s timber belt, up to 40% of the trees are severely damaged or killed by baboons. A study by ICFR to monitor and better understand the extent of the damage indicates that it is increasing.

In the meantime, forestry companies have resorted to culling in an effort to control baboon numbers, and thus reduce the damage. The method used is to trap an entire troop in baited cages, and to shoot them. This has been going on for years, and a large number of baboons have been eliminated in this manner.

The aim of this strategy is to eliminate troops doing most of the damage, thereby reducing baboon population numbers in plantations to match the densities in neighbouring natural areas. Affected companies have reported that this strategy has reduced the damage.

No viable alternative methods of reducing baboon damage in plantations has been found to date, though many have been suggested and tried.

Lethal control of baboons has put the forestry companies concerned – and the industry as a whole – on a collision course with environmental activists and NGOs, and with the public at large. A recent segment on the high profile TV programme Carte Blanche, put the issue – and the practice of culling – on national television.

Culling is not illegal. Chacma baboons are not a threatened species. The Forest Stewardship Council has accepted it as responsible management practice as long as it is transparent, there is sufficient consultation with stakeholders (including wildlife officials), and it is properly monitored.

But still, nobody wants to see baboons being culled. The forestry industry certainly does not relish having to implement – or defend – the practice.

Many private farmers across Africa whose crops are damaged by baboons – or other animals – simply shoot them to protect their livelihoods. It’s quite simple. But for the forestry industry it is not simple.

Plantations are highly visible across the landscape, they are the subject of intense scrutiny by environmental NGOs and operate very much in the public eye.

A Baboon Damage Interest Group has been set up by the industry to consult with stakeholders and co-ordinate research in baboon behaviour, population dynamics and to quantify damage and predict at risk plantations. It includes affected timber growers, provincial nature conservation, the Wildlife and Environment Society of South Africa and the Endangered Wildlife Trust.

It is currently extending its membership to other affected stakeholders, like the South African Sub-tropical Growers Association and the Mpumalanga Department of Agriculture Forestry and Fisheries.

A raft of behavioural and ecological studies being undertaken at the Baboon Research Centre at UCT are expected to be released later this year. The ICFR is leading research to quantify productivity losses and develop a monitoring and risk model that will indicate where management interventions would be most effective.

All of this work will provide the industry with accurate information – based on sound science – that will make it possible to develop an integrated management strategy to reduce baboon damage and ensure sustainability of the plantations.

What we are learning from the preliminary findings of the research is that:
• Baboon density in the Mpumalanga study plantation was found to be more than three times higher than the neighbouring natural area.
• Baboon damage seems to occur more frequently on high productivity sites, where resources are more readily available and so less time is needed by baboons for foraging.
• Compartments most likely to be affected are where trees are over four years old. Species most likely to be affected are P. patula, P. taeda, P. patula x  P. tecunimanii, and is less likely to occur in P. elliottii.
• Troops in plantations appear to have more adult males than troops found in neighbouring natural habitats, this causes a disruption in social relationships, increases the stress levels – and the bark stripping.

Negative public image
The focus of the Carte Blanche television programme was on the discovery of ‘mass baboon graves’ in Mpumalanga pine plantations, which provided gruesome evidence of the culling practice. Although the programme did give industry an opportunity to respond and explain the strategy, it tended to create a negative public image.

Local environmental NGO GeaSphere is at the forefront of calls for an end to the practice of baboon culling by forestry companies.

“The industry has been dealing with the baboon problem since 1975, when the first baboon troops were culled. Despite the on-going culling, the problem is escalating – which indicates that the current management strategy is not effective.  Alternative, humane options must be considered, tried and tested,” says an open letter from GeaSphere.

The letter states that baboon damage is a symptom of a larger problem, and that is that Mpumalanga is oversubscribed in terms of timber plantations which are having a negative impact on biodiversity and water resources.

It suggests a number of alternative solutions:-
• Convert marginal areas to indigenous, long rotation hi value timber.
• Open wide conservation corridors within plantations, manage them to promote diversity – they would also act as buffers against wildfires.
• Lobby the government to grow hemp for pulp as an alternative to timber.

Geasphere issued a formal complaint to FSC back in 2011 about the culling of baboons in Mpumalanga plantations. It charges that the FSC panel was not ‘independent’ and did not consider their recommendations that lethal baboon control methods do not work, and that a moratorium should be placed on the practice “until sufficient research data is available to support a holistic evaluation of the issue”.

Research reports due for release soon
The behavioural and ecological studies being done by the Baboon Research Unit at UCT are expected to be released by the end of 2017. Meanwhile the ICFR work to quantify and monitor the extent of baboon damage and develop accurate risk maps is forging ahead.

Perhaps this work will provide answers and sustainable solutions that enable the timber companies to sustain their businesses while assuring the public and the various stakeholders that they are operating ethically and effectively. 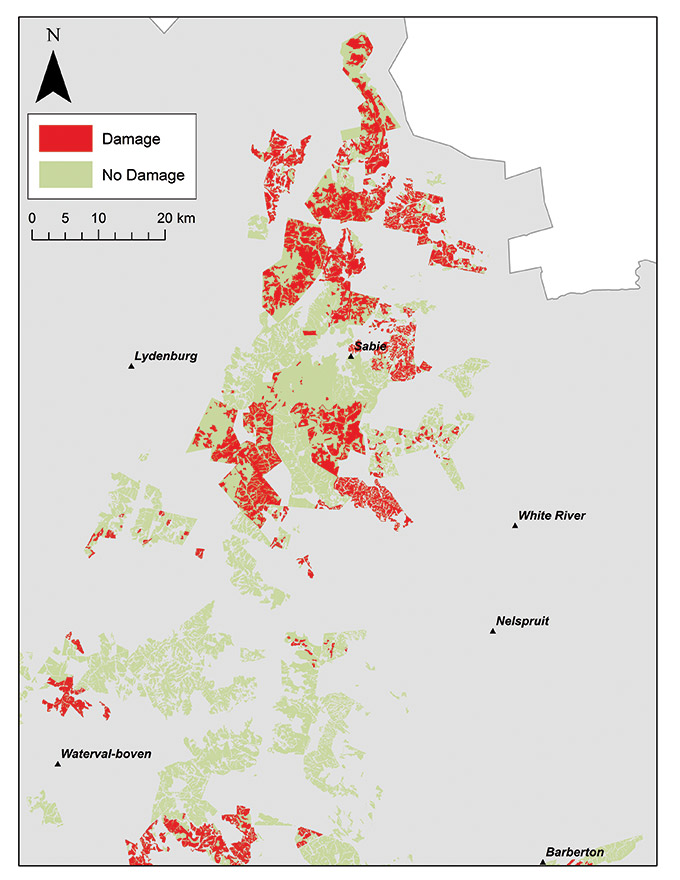 Baboon damage: This map shows the areas where baboon damage was found in plantations during a field survey conducted by ICFR in 2015. (Map courtesy of Ilaria Germishuizen/ICFR) 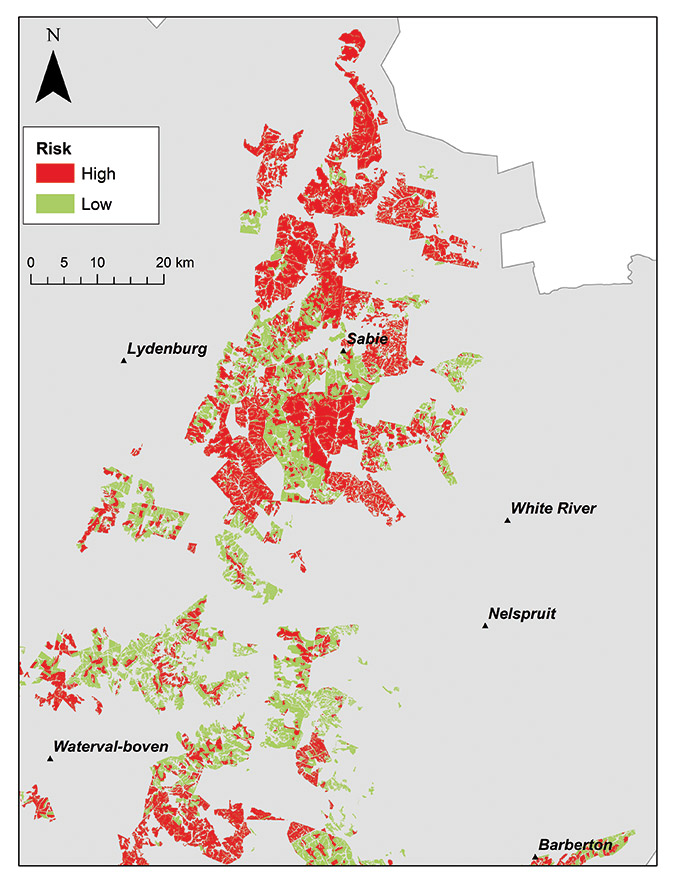 Baboon damage risk map: This map show plantations that are at risk of baboon damage, based on environmental and plantation indicators. (Map courtesy of Ilaria Germishuizen/ICFR)