Show of force from uMshwathi FPA

Members of the uMshwathi FPA turned out in force to attend the annual general meeting held at the Dalton Farmer's Hall last month. 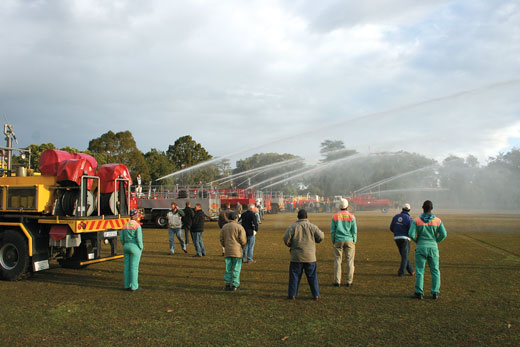 Mine is bigger than yours ... uMshwathi FPA members check out their fire power at the recent AGM in Dalton.

The FPA is an amalgamation of the Albert Falls/New Hanover, Dalton and Wartburg Fire Control Associations.

Graeme Freese is the FPA chairman and Cramond warden, Dieter Schulz is the Dalton warden, Egon Schulz is the Wartburg warden and Rudolf Koch is the New Hanover warden. Mike Mackenzie is the Fire Protection Officer.

Despite the fact that the uMshwathi FPA has no municipal funding as yet, the members among them can muster an impressive force of fire fighting vehicles, including bakkie sakkies, tractor-trailers and fire trucks.

There were about 50 fire fighting vehicles on display at the AGM, ranging from the latest Mercedes Benzes belonging to the corporate growers to not so new but very well looked after old models. The display represented about half of the FPA's total fire-fighting equipment.

The area covered by the uMshwathi FPA is mostly cane and timber farm land, and terrain varies from mountains to flat land. Rainfall varies from 1 500 mm pa to 700 mm pa.

In his report, Mike Mackenzie congratulated the corporate members for upgrading their fire fighting vehicles and for their training programmes. He reminded members that every fire must be reported on the same day that it occurs, and that in the case of spread of fire from one's property, FPA members are presumed to be innocent of negligence until proven otherwise.

The challenges faced by the uMshwathi FPA include a funding shortages for training; the high risk of fires spreading from Ingonyama Trust land and land restitution beneficiaries who are not members; also the high fire risks of the sawmills and charcoal operations in their area.