One of the most advanced camera surveillance systems in the world, developed here in South Africa, is watching over forests on four continents around the world. 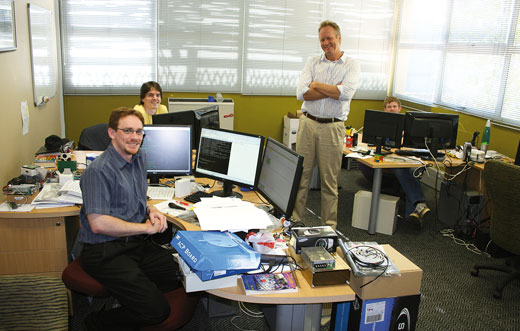 The surveillance system was originally developed by Dr Gavin Hough to monitor environmental changes in Antarctica, while he was involved in research work for the Space Physics Research Institute.

Realising the system's potential for monitoring commercial plantations, Dr Hough used the environmental research tool to develop ForestWatch, which is being rapidly deployed around the world as plantation owners realise its potential for early detection of fires.

It has now been installed in forestry applications in Chile, Canada, the USA, Slovakia, Greece, Australia, Swaziland and South Africa, where it is covering around 60% of corporate forestry estates.

The system is used extensively by the fire protection associations in KwaZulu-Natal and Mpumalanga, and will soon be moving into more remote areas like Ugie and the Cape.

ForestWatch uses high resolution cameras to scan the surrounding environment. This is linked to an ingenious software programme that integrates detailed landscape information with real time and space data. This gives the system operator the ability to detect any changes in the landscape, such as the appearance and movement of smoke, and to immediately analyse the data to provide key information which facilitates early detection, evaluation of the threat and rapid response.

The fire protection officer can evaluate the threat based on its exact location, the fuel load, the proximity of fire fighting units and the level of access to the fire front. Thus, he can mobilise the appropriate response, whether it's the ground-based fire fighting units or aerial response.

The detailed information available is also very useful for doing post mortems and fire incident and response investigations. It has also been useful in monitoring other activities like timber theft or poaching because nothing escapes the eyes of the ForestWatch cameras.

"We also want our system to be useful outside of the fire season, and so we have picked up instances of timber theft, cycad theft and poaching," said Gavin.

Now ForestWatch has been installed at Cape Town harbour to monitor port activities, and is being used to monitor the informal settlements on the Cape flats for fires. Because these settlements are so dense, the fire fighting vehicles can't get in, so the ForestWatch system can pinpoint exactly where the fire is and the fire chief can direct the response team to the best position closest to the fire.

The ForestWatch system is installed by Durban-based Envirovision Solutions. A key aspect of the operation is the training which the company provides to the system operators who are much more than just camera-watchers. The system gives them a powerful tool to add value by building a detailed profile of the environment under surveillance.

The cameras themselves are mounted on masts and can be powered by Eskom electricity or by solar and wind energy. The cameras scan 360 degrees. The range depends on the terrain and the conditions, so typically in South Africa, that is about 8 kms. In the higher altitudes in Canada where the air is clear, the range is more like 13 kms.

The challenge, says Gavin, is to expand the coverage and to get all the landowners to contribute equitably to the cost. In South Africa, it is mainly the large corporate growers who are paying for the cameras. Another challenge is the theft of cameras and equipment from the masts.

Gavin says that on-going development of the system will lead to more applications in the future, such as crime prevention and monitoring climate change.