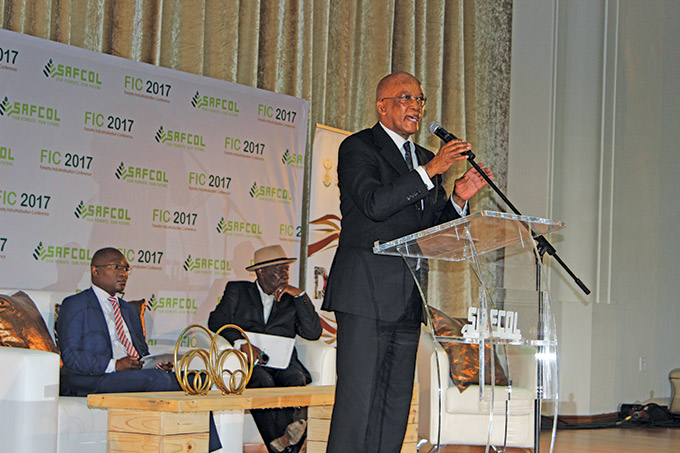 "We need to raise the national profile of the forestry sector. It has the potential to contribute more to the economy, to alleviate poverty, create jobs and boost rural development.” So said Dikobe Martins, Deputy Minister Public Enterprises. With him on stage Bheki Cele (centre), DM Agriculture Forestry and Fisheries, and Bulelani Magwanishe (left), DM Trade and Industry, delivered a similar message to conference delegates.

South African Forestry Company Ltd (Safcol), in collaboration with key government stakeholders, has launched an exciting initiative aimed at raising the profile of forestry as a strategic resource that has the potential to deliver solutions to many of the country’s biggest challenges.

The initiative was launched at a two-day ‘Forestry Industrialisation’ conference held in Johannesburg recently. The Departments of Agriculture Forestry & Fisheries, Public Enterprises, Trade & Industry and Rural Development and Land Affairs are Safcol’s ‘partners’ in the initiative, and were participants at the conference.

The initiative has been welcomed and endorsed by industry partners including Forestry SA, Sawmilling SA, Institute for Timber Construction, plus researchers, academics and private sector stakeholders.

The core message that forestry could be a game-changer in terms of unlocking rural development, creating jobs, boosting diverse downstream industries, breaking new ground through technology and innovation, driving transformation, carbon sequestration and mitigating climate change, is nothing new. This has been the essential message that FSA and other industry associations have been peddling for years.

The mere fact that the state forestry enterprise plus four government departments have seen fit at this moment in time to stand up in public and sing from the same hymn sheet – with four deputy ministers in attendance – is nevertheless highly significant.

Whether it translates into meaningful action and progress across the numerous fronts where decisive and positive action is sorely required in order to begin to realise the sector’s potential, remains to be seen.

Understandably, some industry insiders who have grown tired of government saying one thing and then failing to put their money where their mouth is when delivery of services or financial resources is required, remain skeptical.

Some of the black conference delegates also voiced their impatience with the slow pace of transformation in the industry, and called for ‘radical economic transformation’. One delegate raised the issue of what he perceived as the “theft” of state forestry assets which have been acquired by the private sector. This a reference to the long term leases over state forestry land granted to private sector companies.

Nevertheless the intention of the Forestry Industrialisation initiative is sound, the commitment from role players appears to be genuine. So this conference could very well signal a turning point in the fortunes of the forestry sector that has been constrained by contradictory and investor-unfriendly regulation, and a lack of government support for decades. 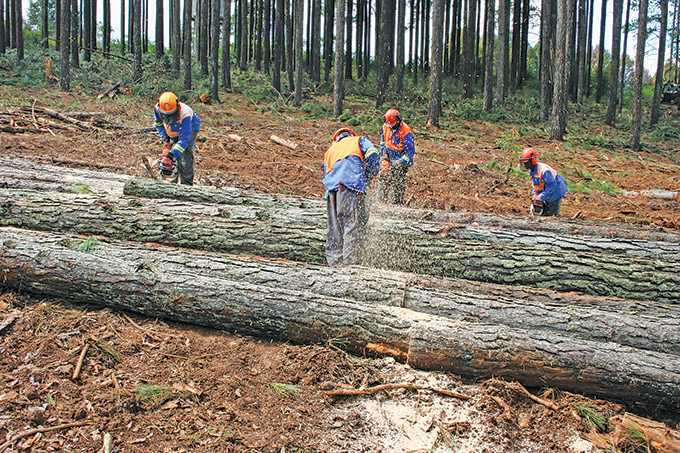 Timber harvesting, a labour-intensive job that is gradually being mechanised in South Africa, with inevitable job losses.

The ‘mythical’ 100 000 ha of land earmarked for afforestation: the years have rolled by yet only a fraction of that land has been afforested. Problems in mobilizing communities, red tape around water use licences and planting permits and a lack of financial resources have hampered progress in getting this land identified and planted. The little progress that has been made is thanks to private sector involvement. The total land managed for commercial forestry in SA continues to shrink.

80 000 ha degraded timberland: DAFF currently has 80 000 ha of degraded and unproductive forestry land in tribal areas under its management (mis-management would be a better term). This land is a national disgrace! The timber is only good for firewood.

Support for the 20-000 black, small-scale growers: Where are the extension officers? Where is the funding for R & D? Why can’t someone fix the roads that small-scale growers must use to get their timber to market? Once again, the private sector has stepped in to provide what support it can, largely in the interests of sourcing additional timber for its own mills/markets.

Land restitution communities: many of these communities have received productive land but have been left without support. Once again the private sector has played a role in keeping restituted forestry land productive through the lease-back model. But the critics say that until those communities are engaged in the processing side of the business – where the real value add occurs – then they will always be economically marginalised. Government’s flip-flop around land reform also sows uncertainty in the market.

These four examples provide Safcol and its partners with wonderful opportunities to step in with effective interventions to begin to unleash the potential that the forestry sector has to offer.

If anybody doubts that forestry can be a rural development game changer, the presentation on the Umgano Project by Jeanette Clarke at the conference provided the evidence.

The Mabandla community in southern KZN pooled their individual RDP grant funding from government to establish 1 320 ha of eucalyptus and pine back in 1998. The trees were planted on a hillside where before a few thin cattle and goats roamed. This community resource has been turned into a diversified agro-forestry business owned by the community trust.

Businesses include sale of eucalyptus roundlogs, a sawmill (utilising pine roundlogs from own plantations), a training academy and a farming and agro-processing business which is in advanced stages of planning. The community has established a nature reserve in partnership with Ezemvelo KZN Wildlife, which will form the core of an eco-tourism business.

The forestry business, which has an annual turnover of R12 million, has created 120 full-time jobs, and the sawmill a further 25 jobs.

The value of the human resources and institutional capacity that has been built within the community through this process is incalculable.

“Through VAT alone, that initial grant from government that was used to get the forestry business going at Mabandla, has been repaid many times over,” said Jeanette. “It’s a no-brainer that government should be investing in community forestry projects.” 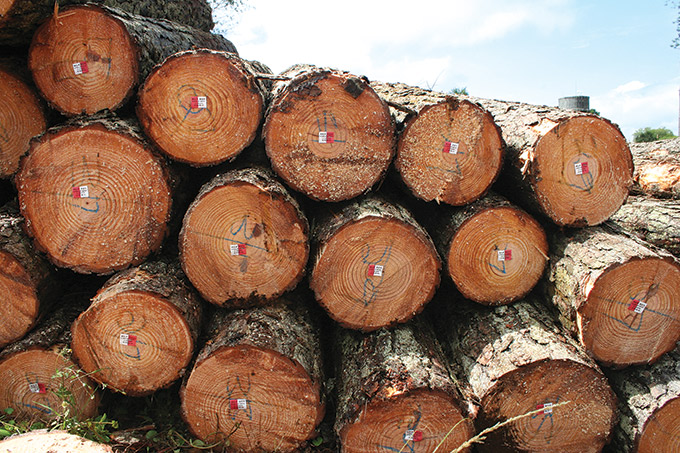 In his address on day two of the conference, Kgathatso Tlhakudi, DDG at the Department of Public Enterprises, summarized many of the key points raised at the conference:-
• The forestry industry is only using 28% of the tree. Timber is a ‘strategic resource’ and we need to maximis e the usage thereof.
• The DTI has announced agro-processing incentives. SMMEs need assistance to access these incentives.
• Government must address the declining sawlog supply.
• Leaseback model: “this is not a fair model. We need to move to models where the communities get equity share in the business … we need broader involvement.”
• The government is sitting on R500 million paid by corporates from the lease of government forestry packages that has not been distributed to communities. This is bordering on “criminal” and we should all be concerned about it.

Feedback from the breakaway session on R & D was that forestry research does not benefit SMMEs – it is dictated by the needs of big business. DTI undertook to form a research forum to set up a framework for producing research that is open source and accessible.

Bruce Sithole of CSIR touched on some of the many new products that can be made from timber to create a new bio-economy. His team is busy doing research and developing technologies for manufacturing these products that could be used by SMMEs.

Markko Nokkala from the VTT Technical Research Centre said that in Finland 100% of the forest biomass has value. He said 40% of Finland’s energy is coming from woody biomass, and that some companies now derive more revenue from energy conversion than they do from pulp and paper. They have become energy companies.

In South Africa there is a lot of free biomass. It has little or no value because – apart from a handful of small, innovative projects – we have not figured out what to do with it yet.

Will all of this talk and good intentions translate into action? Only time will tell. But we should at least be happy that the cards are on the table, and the stakeholders must play them or fold.