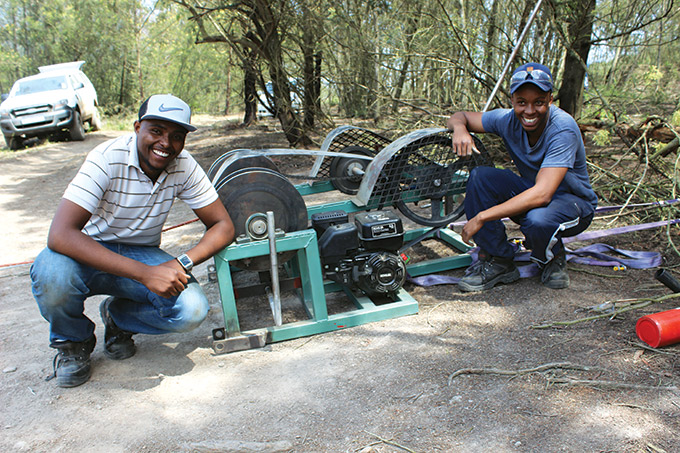 A unique collaboration between forestry stakeholders and the Agricultural Engineering department at the University of KwaZulu-Natal is set to result in the development of a practical, affordable tool for extracting timber from steep slopes.

One of the toughest jobs that tree farmers face is extracting timber from steep areas, especially in wet and slippery conditions. For small-scale tree farmers and community-owned forestry enterprises, this generally means the harvested timber being carried by hand, one log at a time, up the slope to a landing or forest road that can be accessed by a tractor-drawn trailer.

Seeking a solution to this problem NCT, the ICFR and UKZN Agricultural Engineering launched a project in 2015 to develop a practical, low maintenance and affordable timber extraction winch appropriate for use by small-scale tree farmers. In 2016 the project went into its second year of development with funding for the project coming from the Forest Sector Innovation Fund provided by the Department of Science and Technology and administered by Forestry South Africa.

Principle investigators Simon Ackerman (ICFR) and Eric Msomi (NCT) teamed up with the Agricultural Engineering department of the School of Engineering at the University of KZN, for the purposes of designing and building the timber extraction winch.

The brief requires the winch to be light-weight and built with off-the-shelf components to ensure it is easy to maintain. It must also be affordable, durable and have the ability to extract at least five tons of timber per day.

Last year two UKZN engineering students designed the first prototype as part of their final year studies. It was powered by a standard chainsaw engine, but turned out to be unsuitable for the job.

This machine was tested for the first time in the field on a community-owned farm near Richmond recently – and it worked! There were smiles all round and the students were really excited to see their ‘baby’ pass its first hurdle and get the thumbs up from the foresters present. 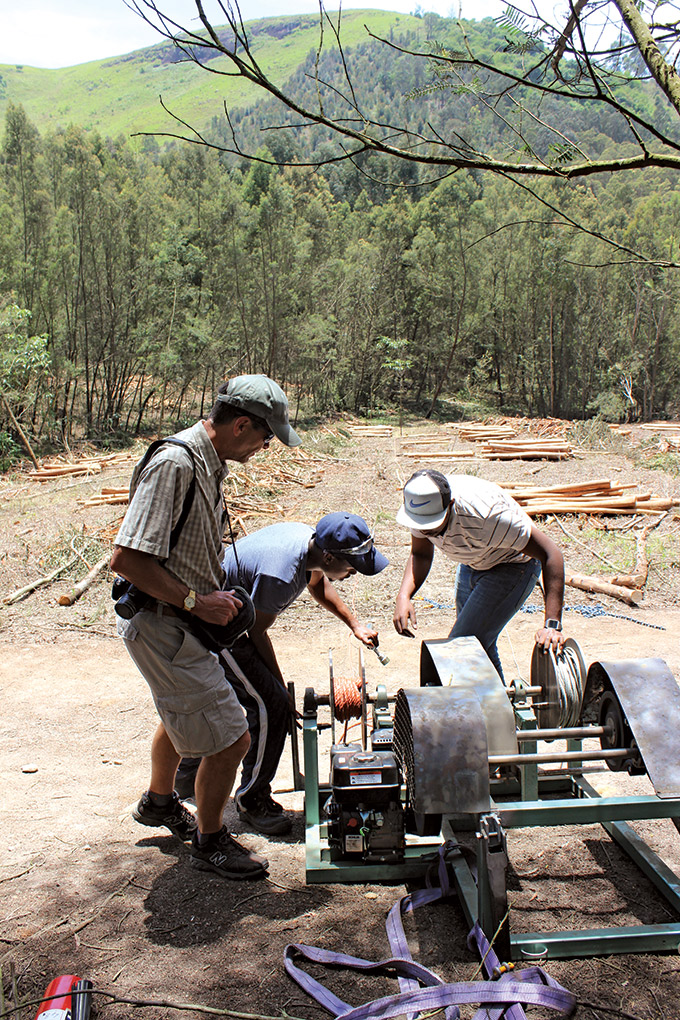 Kholofelo and Lesego busy setting up the winch for the trial, under the watchful eye of Prof Jeff Smithers, head of the Agricultural Engineering Department at UKZN.

The winch is based on a 4.8 kW Kohler lawnmower motor (kindly donated by Norman Candy from PEMSA), which is geared down to drive two drums via a standard drive chain. A 60 metre steel cable is used to haul the logs, while a nylon rope is used to haul back the cable.

It is made with standard off-the-shelf components that are widely available throughout the country. It fits in the back of a bakkie, but is still a bit on the heavy side, requiring four men to lift it. Once on the ground, two wheels are fitted and it can be pushed like a wheel-barrow by one man. 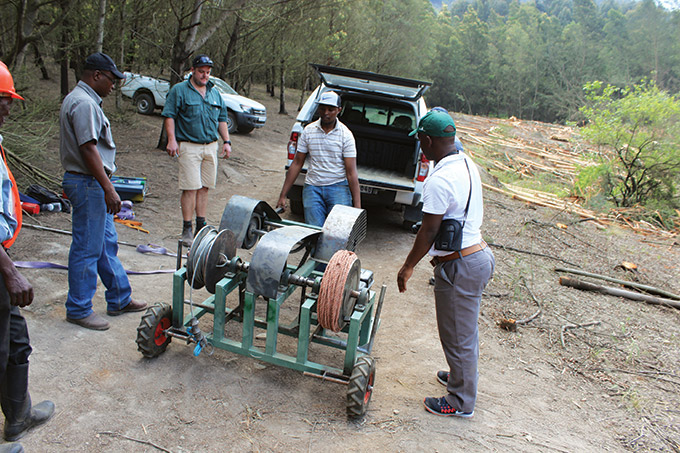 Kholofelo Moloko moves the winch on its wheels to the bakkie. 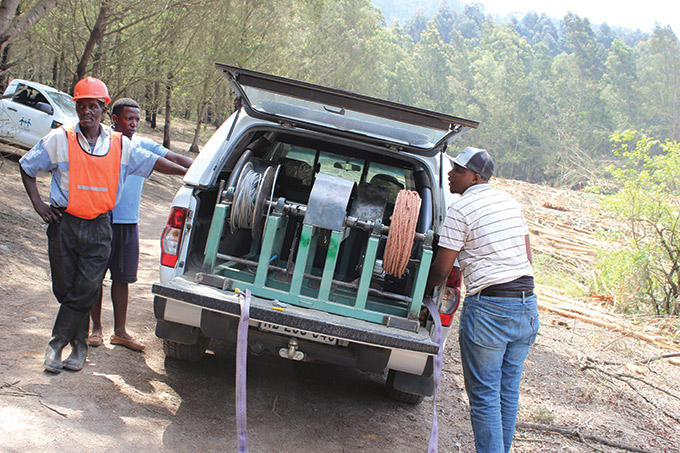 The winch fits in the back of a bakkie … only just. The plan is to make the next prototype a little lighter and easier to handle.

It is anchored to a tree stump on a landing at the top of the slope, and can easily be operated by two or three people: one to operate the machine, one to choke the logs at the bottom of the slope and one to detach the logs from the chains at the landing and untangle the cable and haul-back rope in case they get snagged.

During the first field test the winch pulled four to six 2.4 m gum logs at a time. The logs were felled a few days earlier, and were pretty heavy. The cycle time was around 8-10 minutes at 60 metres. So the team was easily extracting one ton per hour. This would mean that productivity of upwards of five tons per day would be feasible.

The students worked throughout the year with assistance and advice from Prof Jeff Smithers, head of the Agricultural Engineering Department at UKZN, and Alan Hill, principle technician at the University’s engineering workshop. Other supervisors in the project included Vincent van Erk and Mervyn Hansen. Simon Ackerman and Norman Dlamini (FSA) have played a key role in keeping the project on track, with industry support from James van Zyl and Eric Msomi (NCT), Justin Nyakudanga (Sappi) and Duncan Fryer (Stihl). 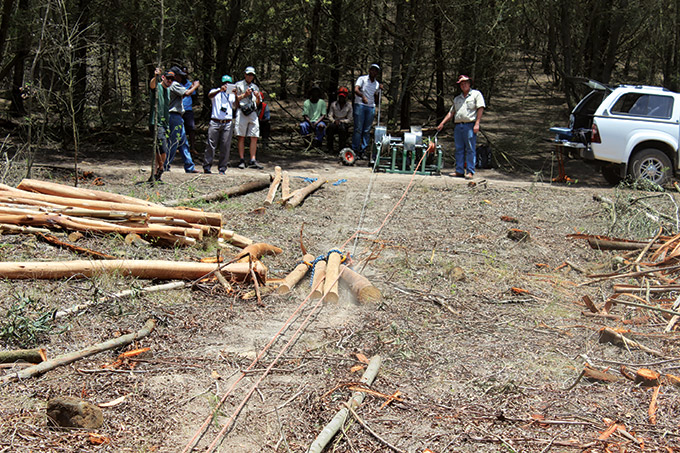 Four gum logs tethered to the steel cable, on their way up the slope. The winch is capable of hauling upwards of five tons of timber per day on a 60 metre rack.

The design and build team will now go back to the workshop to do some small modifications to the winch. Once those are done, it will be loaned out to tree farmers for extensive field trials. If successful, this will lead to the development of a third prototype, and eventually to commercial production.

One of the issues that will have to be sorted out, is that it is going to have to be built significantly lighter without compromising durability.

Additional funding is being sought in order to complete the project to bring the timber winch to the point where it is ready for commercial production. This will ensure that the tree farmers out there have an opportunity to purchase a strong, low-maintenance and affordable tool that will help them sustain the flow of timber that is their lifeblood. 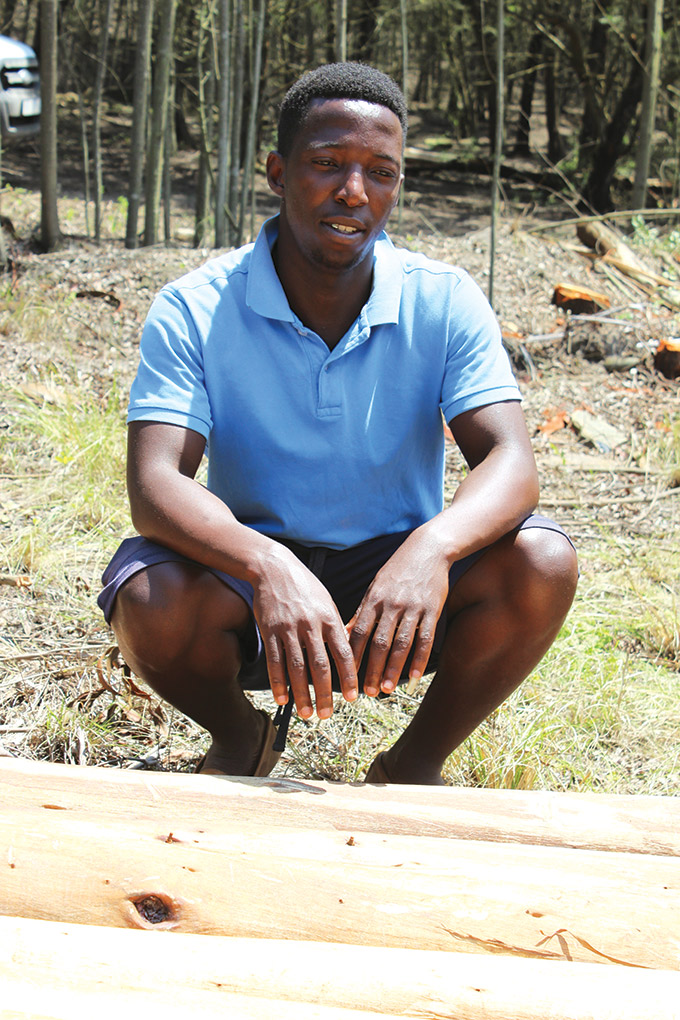 Thando Nxele, forestry operations manager for the Inkanyezi Yamahhobe Trust that owns the farm on which the field test was conducted. He watched the trial closely and is keen to get the winch working on the farm.