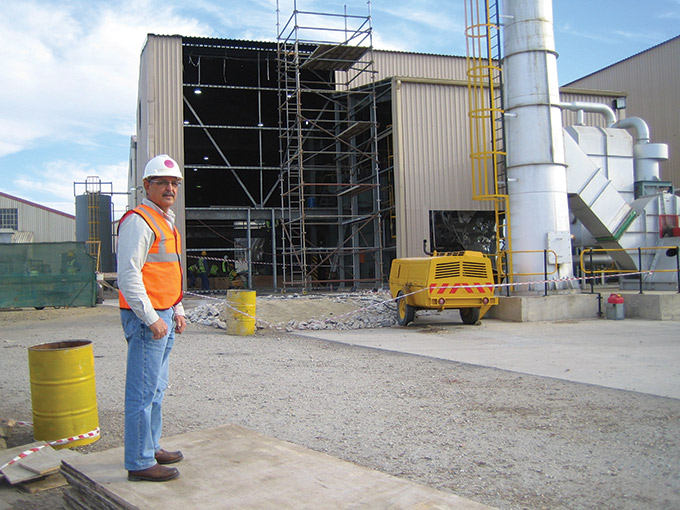 Karl-Heinz Niemand in front of the renewable energy unit. It houses the new oven burning the biomass and the new boiler, with the open space on the left being prepared for the new power generating steam turbine.

MTO Forestry has embarked on exciting renewable energy projects that will bring benefits for the company, its partners – and the environment.
By Theo Stehle

Wood waste in the form of sawdust and off-cuts causes headaches for sawmill managers everywhere because there is no market for this material. It takes up much needed space and has to be transported and dumped in a suitable place at considerable expense.

Moreover, it is well known that sawdust dumps pose a fire risk, and once burning, are difficult to extinguish, smouldering for weeks and even months.

The best use sawmills have put this waste to in the past has been to fire boilers generating steam for the seasoning kilns.

In 2010 the chipboard factory Sonae Novobord in George closed down. Until then the MTO-owned George sawmill had sold 50% of its sawmill waste to Novobord, while using 80% of the rest for steam generation for its seasoning kilns. The other 20% was offered free of charge for composting purposes.

This caused a problem in that 25% of total raw timber intake (100 000 m³ roundwood per annum) at the mill became superfluous. A solution had to be found for getting rid of the waste.

Now let us switch our focus to the MTO Longmore Plantation west of Port Elizabeth. In 2005 Longmore Plantation burnt down and MTO had to cope with salvaging the timber. A decision was taken to erect a wet sawmill there in 2006 to saw the small dimension timber, that had been grown on a pulpwood rotation, into wet-off-saw lumber. This timber was offered for sale wet-off-saw on site, and a portion of it also went to the George sawmill to be dried and further processed in the dry mill. 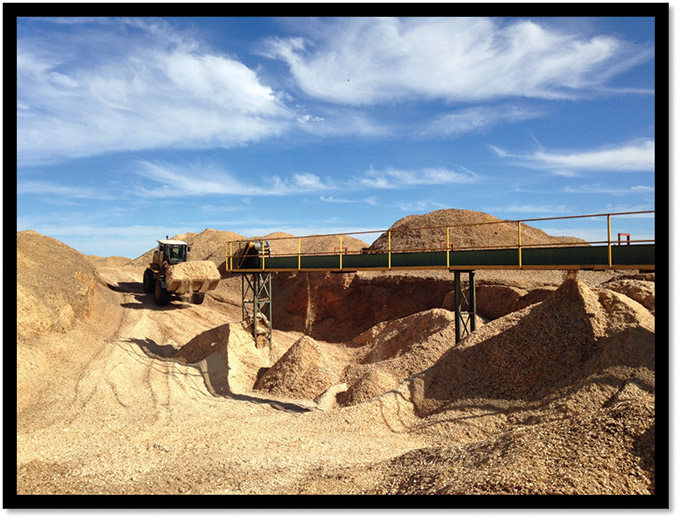 But what about the sawmill waste?
A biomass pellet plant was opened at the Coega IDZ east of Port Elizabeth in 2007, to process wood waste into pellets for export to Europe as boiler fuel for power generation. The success of this venture was also dependant upon local industries converting their oil and coal fired boilers to run on wood pellets – to be supplied from the Coega plant. Longmore sawmill provided 60% of the biomass raw materials needed by the Coega plant.

However the Coega plant closed down in 2012, leaving Longmore sawmill with the same problem as in George.

In 2010 the Global Environment Fund took over MTO. This provided new opportunities in the green economy. A simple definition of the green economy is “a sustainable economy and society with zero carbon emissions and a one-planet footprint where all energy is derived from renewable resources which are naturally replenished”.

The timing was right for MTO to pursue these opportunities by harnessing the energy locked up in this biomass. This eventually resulted in the establishment of MTO Solutions a few years later.

MTO initially considered the possibility of persuading local industries to use wood biomass as an energy source for their steam boilers instead of coal.

However there was not sufficient interest and commitment, and the MTO team realised they would have to find their own solutions.

Subsequently a solution was found in October 2014 to dispose of the rest of the surplus biomass at the George sawmill. The textile factory Tradelink, which is situated about 200 metres from the sawmill boiler, was using oil as an energy source for its steam generation. A partnership was formed between the two parties to enable steam to be generated by the sawmill instead. A pipeline was installed between the two firms to deliver about 9 100 tonnes of steam per annum to Tradelink, generated from 3 300 tonnes of biomass per annum. The overhead pipeline installation for piping steam to Tradelink textile factory about 200m away.

In addition, 90% of the condensate is returned to the Sawmill by separate pipeline, thereby also saving water.  This venture has proved to be very successful, with financial benefits to both partners.

The second phase, now almost completed, consists of the dry mill and rework mechanisation of the George sawmill. The dry mill has been upgraded for the de-stacking, sorting and grading of dried timber, inter alia to accommodate the additional volume from Longmore sawmill. This consists of computerised automated sorting and grading, saving considerably on manpower. Increased finger joint capacity and planing efficiency are also part of this phase.

More exciting solutions using biomass surpluses and renewable energy are in the pipeline.

The Woodlands Biomass Project involves collaboration between the Longmore sawmill and the Woodlands Dairy near Humansdorp, to use Longmore’s excess biomass for generating steam from their boilers instead of the current Eskom and oil energy.

MTO at its own cost has already installed a high-pressure steam boiler at Woodlands. Longmore will supply all its biomass to Woodlands, which will satisfy 90% of Woodlands’ needs for energy. Both MTO and Woodlands are set to derive considerable economic benefits from this partnership.

Eventually the sawmill will sell the 20% surplus electricity to outside clients, and there will be no more sawmill ‘waste’ lying around.

These projects are being driven by Schalk Kapp of Global Environment Fund and Karl-Heinz Niemand, assisted by Johan Dekker, a mechanical engineer. 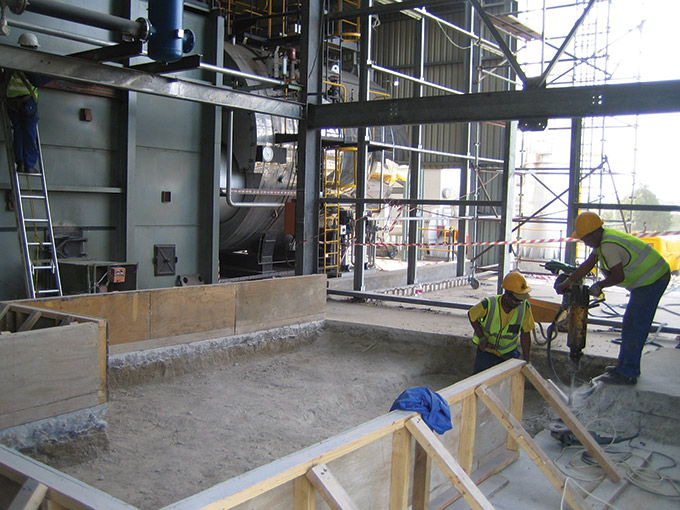 Preparing the foundation for the power generating turbine. In the background are the oven and boiler.

Three distinct benefits accrue from the utilisation of biomass at the George sawmill:
• Value addition in drying additional wet structural timber ex Longmore
• The sale of  steam (where fossil fuel is replaced by green energy derived from FSC certified timber)
• Green power generation for own use as well as export to the George Municipality.

Further afield, MTO Solutions is currently investigating the possibility of utilising hardwood timber waste from its assets in Mpumalanga and Swaziland for charcoal manufacture in that area. This is likely to involve the retort oven system in which gas effluents from the combustion process are fed back to produce additional energy for the enhancement of the combustion.

Overall, these exciting initiatives will bring significant benefits to MTO, its partners and to the environment.