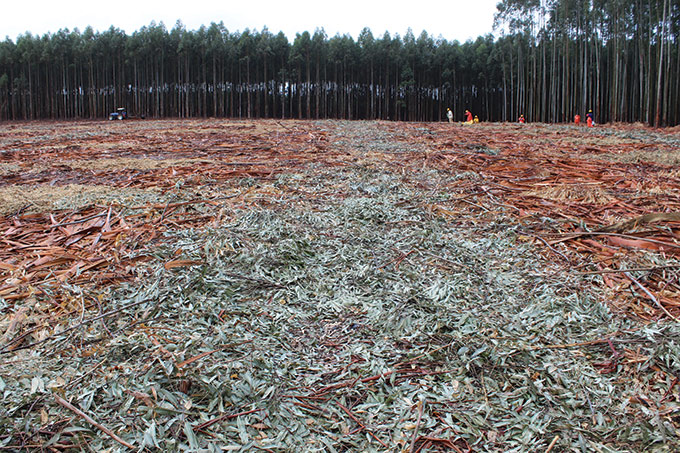 Forest litter covers the soil after harvesting on Jon McKenzie’s farm in Weza. Jon uses a tractor-drawn chipper to reduce post harvest slash, which is then spread across the compartment to protect the soil.

Another reason to retain forest floor litter
Forest floor litter is widely regarded as a fire hazard and is often burnt off or cleared mechanically to prepare a site for mechanical operations, and/or to reduce the fuel load. But it does play an important role in locking in soil nutrients, moderating soil temperature and protecting the soil from erosion and leaching.

New research by Scion has shown that forest litter also plays an important role in preventing pesticides from flowing through the soil profile, especially during rain events that occur soon after application.

Scion conducted field trials to investigate the fate of pesticides commonly used in New Zealand forestry. The highest concentrations of pesticides in soil and water and possible risks to the environment occurred on the day of application and/or during rainfall events in the first month after application, but rarely exceeded water quality standards.

The research team found that forest floor litter played an important part in limiting the flow of pesticides down through the soil profile, and should be retained on site.

The results showed that forestry pesticides – used according to instructions, using latest technology and best application practice – have a very short term impact on the receiving water and soil environments in Pinus radiata compartments in New Zealand.

The risk of leaching from soil into waterways only occurs if there is sufficient rainfall to initiate drainage and runoff.

Herbicide resistant weeds
Over-use of a single herbicide like glyphosate, which is used in 90% of all herbicide applications in South African forestry, is not a good idea as eventually glyphosate-resistent weeds will evolve.

He says the best way to control weeds is to rotate different chemicals with different modes of action, and to rotate between chemical and non-chemical mechanical operations. 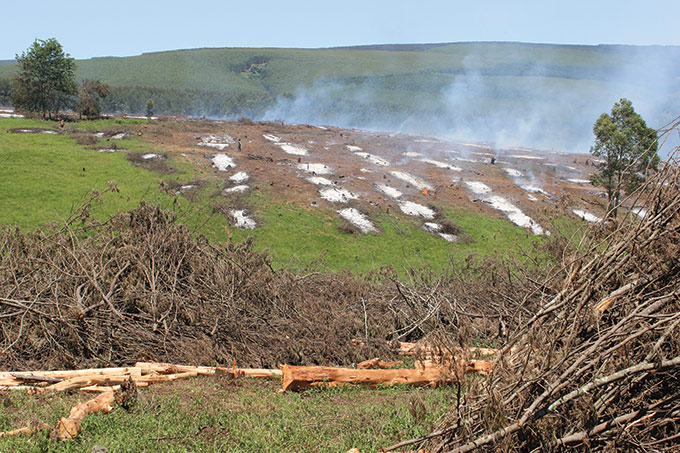 A cool burn on this KZN midlands farm removes the branches and sticks left behind after harvesting, but leaves the fine litter layer and topsoil organic material intact.

Writing in NCT’s News & Views magazine, Craig says hot burns are easy, convenient and cheap – all you have to do is burn when the slash is dry – but a hot burn will have long-term, detrimental impacts on site productivity.

Implementing cool burns, on the other hand, is more difficult as you have to wait for the ideal conditions: early morning or late evening, or on an overcast, cool day, when there is still moisture in the litter and in the topsoil. The aim is to burn off the branches and sticks, but to leave the fine litter layer and topsoil organic material intact.

Hot burns do long-term damage, says Craig, depleting the nutrients in the soil, reducing the capacity of the soil to absorb and retain water, as well as erosion and leaching, thus impacting on water quality in nearby rivers and streams as well.

Beware spray drift
Trees that just don’t grow well within a compartment for no apparent reason, could have been impacted by chemical spray drift.

Sappi’s Jacob Crous reports that factors that affect spray drift include wind speed, physical properties of the spray solution, height of the spray nozzle, level of shielding, nozzle type and pressure, plus weather variables like humidity and temperature. However he says that even under ideal weather conditions spray drift of 3 – 10% of the product one meter from the spray source can occur.

Trees catching spray drift will show symptoms like curling leaves etc, but if they survive they will appear to overcome these impacts.

However in a trial conducted on six-month old GxN trees by the ICFR and continued by Sappi, Jacob says that volume production (i.e. growth of the trees) reduced significantly with the simulation of glyphosate drift.

After four years tree growth was reduced by 34% at the lowest glyphosate drift factor, and by 64% at the highest drift factor tested.

Furthermore, the growth trends indicate that this slow growth condition will continue through the full rotation of the affected trees.