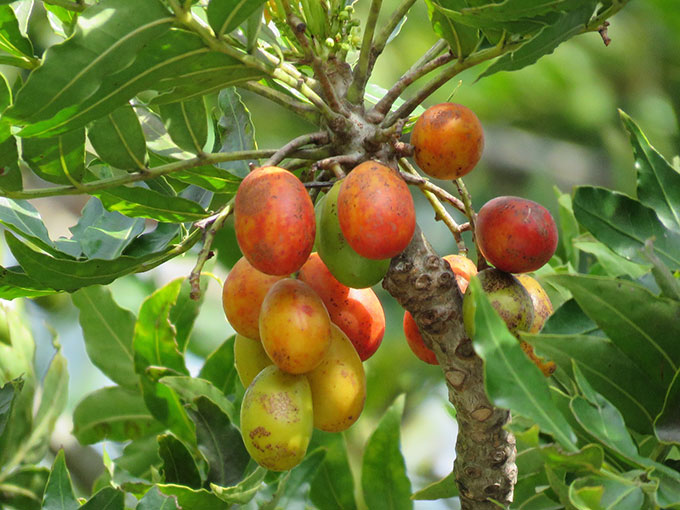 Cape Plum - Harpephyllum caffrum – Anacardiaceae; Wildepruim (Afrikaans); Umgwenya (Xhosa/Zulu) – is an attractive forest tree that thrives in its natural forest habitat as well as in parks and gardens, and produces abundant fruit enjoyed by a variety of birds and small mammals.

Cape plum is a large tree species that reaches up to 15 metres in height. It is a forest tree throughout its range but grows remarkably well when artificially planted in full sun environments. In its natural habitat it often grows on steep hillsides where plants can develop two to three thick buttress roots that grow on the ground surface with a rounded profile.

It has been planted for some time as a street and garden tree in various cities and towns throughout South Africa, an activity that has spread it distribution significantly beyond its natural range. It occurs naturally along the southern and eastern coastal regions from approximately Jeffreys Bay to the northern areas of Limpopo province. It has been very commonly planted in urban areas and most plant enthusiasts will have seen the distinctive firm red fruits spilled on the ground in public areas, streets curbs, parks or gardens. Trees growing in cities often bear a relatively straight stem and are pruned to maintain this. This is usually a single stemmed species, however some individuals can sprout multiple large stems from the base, particularly in their natural forest habitats. Young plants have a smooth, light grey bark which becomes rougher in older trees that may develop very thick stems and lush rounded crown. Cape plum trees are obvious when fruiting due to the red splashes of fruit and red leaves, that result from occasional red leaflets on as well as senesced leaves that are retained on the tree for some time. 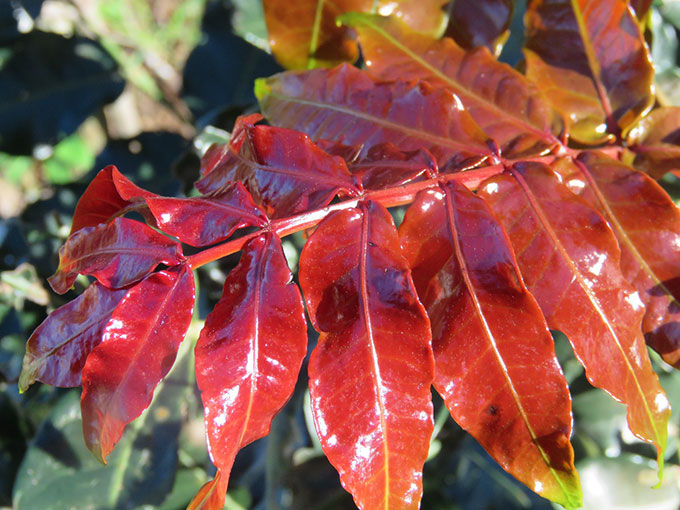 The branching pattern differs depending on plant age but older specimens have a characteristic lateral branching pattern where the lower branches appear to droop near their bases. The bark is a uniformly light grey, brown in young seedlings and grey in saplings in small trees. In older specimens it becomes darker, with numerous vertical cracks and mottled with lichens. This species has a significant degree of succulence to its stems and roots, which undoubtedly aids in providing drought tolerance. Given its ease of cultivation, size and value, it is a species that deserves to be cultivated widely.

Collecting fruits and seeds
This species flowers during Summer (October – February), producing small clusters of small, relatively inconspicuous flowers, considering the size of the tree. The sexes are carried on different trees. Fruits can be produced in large numbers during summer and fruits are initially small, and green coloured turning yellow to red when ripe. Fruits can also be collected from the tree using a ladder to access higher branches. Trees can also be physically scaled, or the fruits can simply be picked up or raked after having fallen. A few kilograms of fruits can easily be collected this way and stored in buckets or bags for transport. The fruits are edible and very tasty, and have a fibrous yellow flesh surrounding the hard seed coat. They are eternally popular with children that eat these and scale the branches of trees to pick its fruits. Fruits can be stored in a refrigerator for several days before being planted. 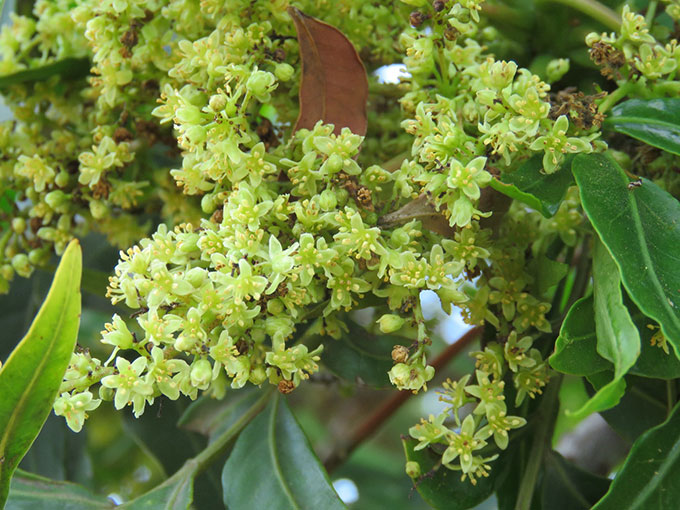 The male flowers of Cape plum.

To plant this species, it is preferred to remove the outer seed skin and pulp, although this is not an absolute necessity. Seeds germinate very easily from depulped fruits. Fresh seeds will typically germinate within 30 - 50 days if the planting medium is kept well watered. 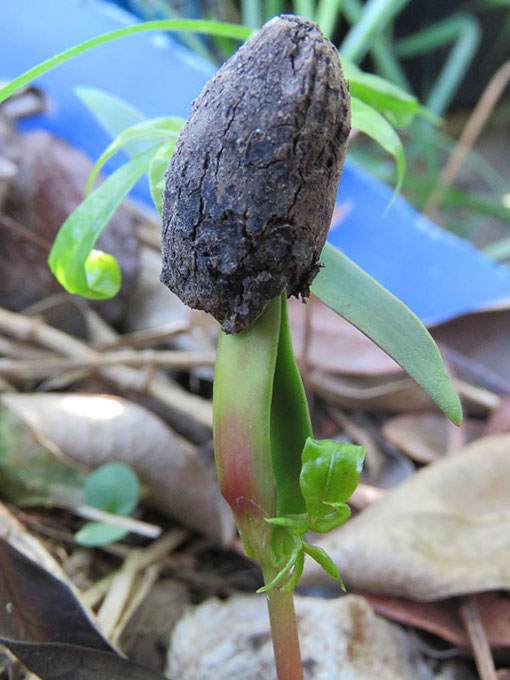 Planting seeds and propagation
Planting media for this species can vary, but a standard mixture of 1:1 soil : compost is usually sufficient. A higher percentage of compost can be used. This species can be planted at any time during the warmer months from late August to early March. The seeds should be planted horizontally (not essential) about 2-4 cm below the soil surface and the media kept moist by regular watering. Good drainage and aeration is important and covering the sowing bed or potting container with a thin layer of mulch aids in keeping the growth medium moist and suppressing small weeds. The germination period varies from 30-50 days, when the germinating newly formed cotyledons start to emerge above ground.

Seedlings planted from healthy stock and in good soil are normally not susceptible to a great variety of diseases. This can however vary depending on the sanitation of your propagation facilities or nursery. Newly germinated seedlings are mildly susceptible to damping off, but a minority of seedlings die off due to this. Insects will occasionally attack and eat the fleshy cotyledons, and cotyledons will sometimes break off. These are however not significant problems in the propagation of this species. Insect attacks on seedlings can also be episodic and unpredictable so its important to regularly check seedlings.

Seedling care and planting out
Germinated seedlings are fast growing and will reach at least 30cm in their first year of growth. Growth rate is sensitive to the amount of water, fertilizer and the bag size being used. Smaller bags dry out more quickly and need more frequent watering. Fertilizer is beneficial and applying either soluble or granular fertilizer regularly definitely increases the growth rate. Young seedlings are not prone to a variety of diseases, however they suffer from transplanting stress and fungal infection when transplanted too young. This will be easily seen when the leaves start to wilt and the stem has a blackened, shrivelled region near the base. To avoid this, seedlings should be transplanted at a later stage when seedling are 25 cm or higher and have developed strong mature leaves. The cotyledons can remain on the stem for several months during the first growth season. Seedlings that germinate in late summer will survive moderate winters, but not extreme frost. 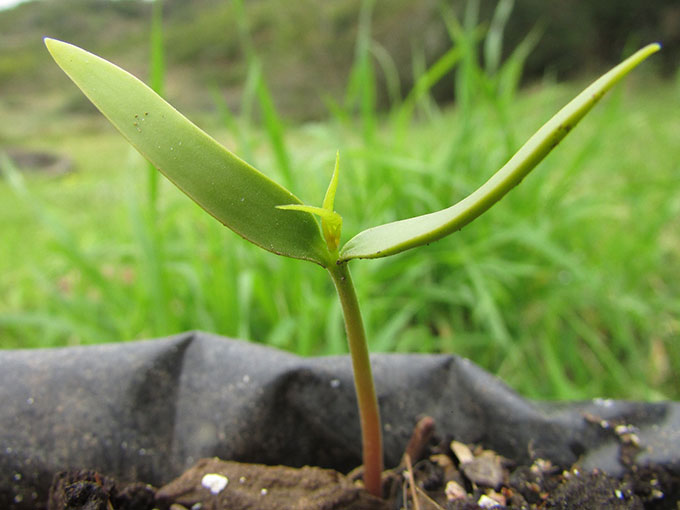 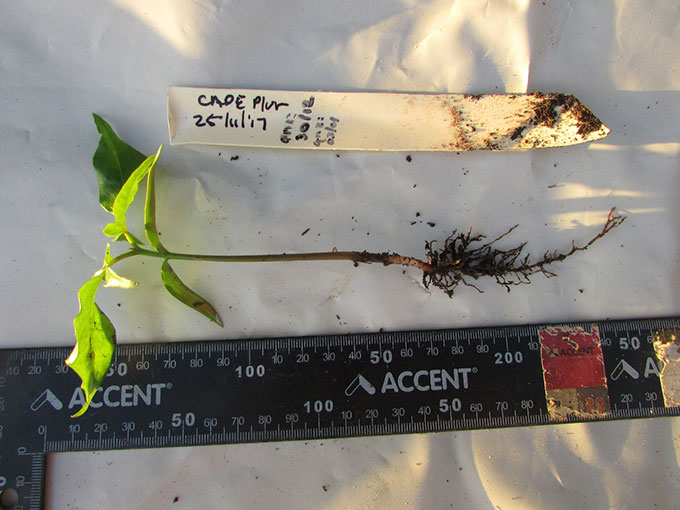 A seedling of H. caffrum showing the above ground shoot development and below ground roots 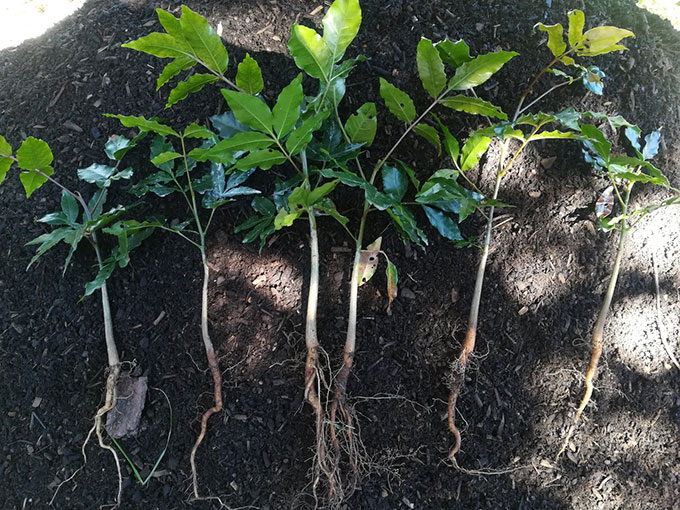 Seedlings of Harpephyllum caffrum showing the root and shoot development. Notice how thickened base of the stems are. 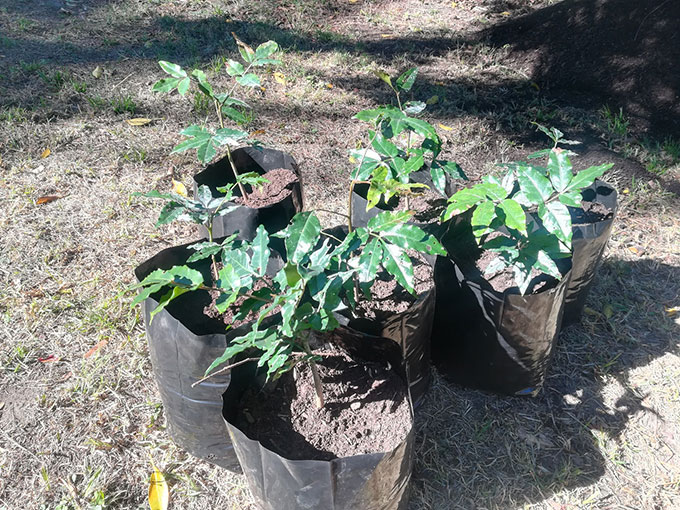 Trees can be transplanted into garden or landscape sites when they are still as small as 30cm, however, very small seedling require more protection and care to ensure survival. Larger saplings, exceeding 1m are more ideal for this purpose as these can tolerate full sun and withstand the weather elements more easily. Cape plums can be transplanted into a variety of areas, from full sun to semi shade although they should not be planted within 5m of a house wall as the roots of very large trees can be a danger to such structures.

Natural history notes
Cape plum is a large fruit tree that provides a valuable food source of indigenous wildlife. A variety of birds and mammals feed on the fruits of this species including Crowned hornbill, Knysna Turaco, African green pigeon, Vervet Monkey, Cape Bushbuck, Bushbpig and many others. During the fruiting months, the aftermath of seeds and seed coats can often be seen strewn over the forest floor where animals take advantage of the seasonal fruit supply. 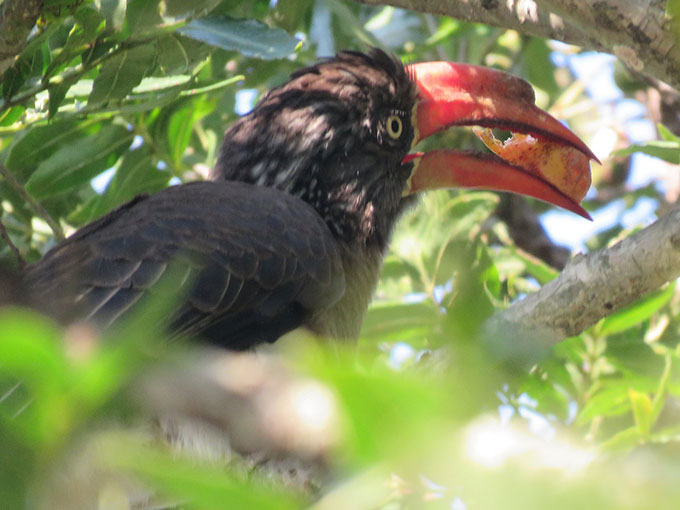 Crowned hornbill feeding on the fruits of Cape plum. 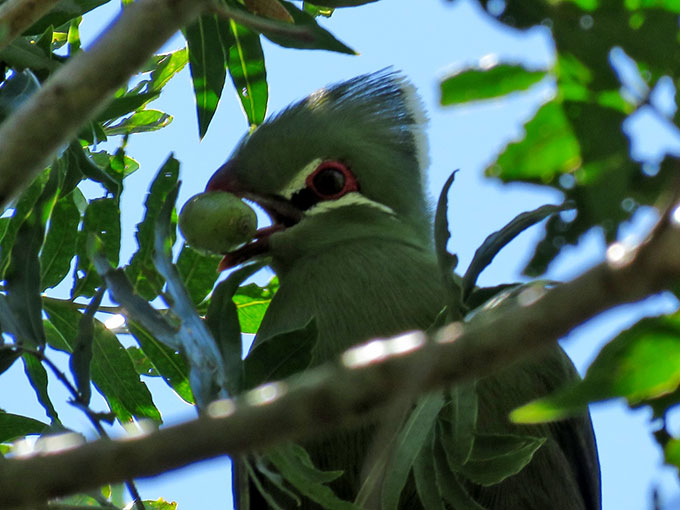 Dr. Coombs is an environmental consultant and writer based in Grahamstown. He has a PhD in Botany from Rhodes University in Plant Ecology, and has been planting and propagating indigenous trees in his home nursery for many years. For more info, contact Gareth on coombsgareth@gmail.com.