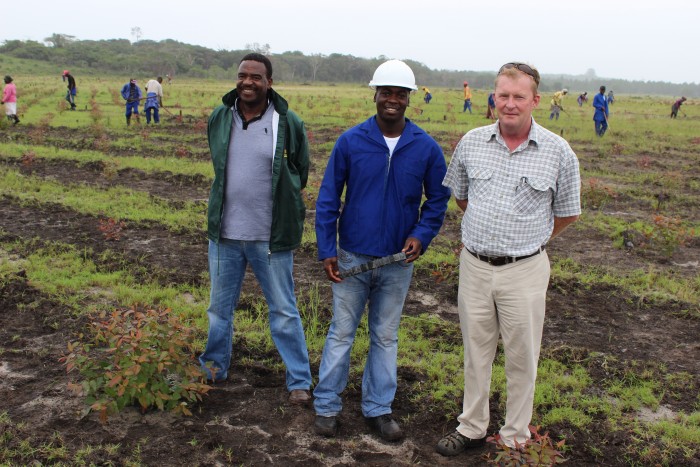 (Left to right) TMM Forestry manager Pius Tembe, Sandile Manzini of AmaWundlu contractors and Rory Mack of Awethu Forestry Investments in a compartment at Manzengwenya that was planted in November. A line weeding operation is in progress.

It’s been a long time coming, but the biggest category B plantations in the country are in community hands at last. Manzengwenya and Mbazwana plantations, totaling 19 000 ha, are in the process of being handed over to the Tembe Mbila Mabaso Development Trust, which represents three communities in Maputaland.

The Trust has partnered with the NGO Lima Rural Development to secure R80 million grant from the Jobs Fund and R20 million from DAFF to finance the community forestry project for the first three years. The money will be used to clear and plant 3 300 ha of temporary unplanted land, creating hundreds of jobs in an area where there are very little alternative employment opportunities.

Work started in the Manzengwenya plantation in the middle of 2013, with 1 000 ha planted to date. The target is to clear and plant 3 300 ha over three years. 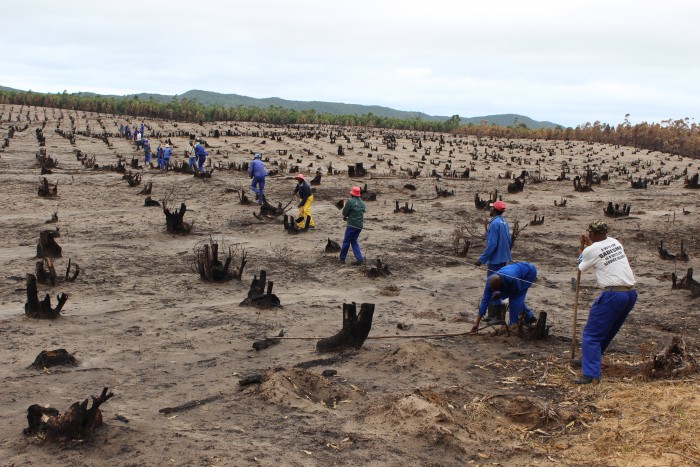 A marking operation on the go at Manzengwenya. TMM Forestry will plant 3 300 hectares in three years.

The two plantations (Manzengwenya and Mbazwana) are situated on Ingonyama Trust land on either side of Lake Sibaya. These plantations were established by the then KwaZulu Department of Forestry in the 1960s and have been leased by DAFF (formerly DWAF) since 1994.

The tribal authorities of the three communities surrounding the plantations formed a joint trust, known as the Tembe Mbila Mabaso Development Trust, which has been engaged in negotiations with government to take over the lease of these plantations for more than a decade.

The TMM Trust has set up a wholly-owned commercial company, TMM Forestry (Pty) Ltd, to run the forestry business. TMM has a small core staff and uses local contractors to do the clearing, land preparation and planting. There are currently 606 people employed in the project. 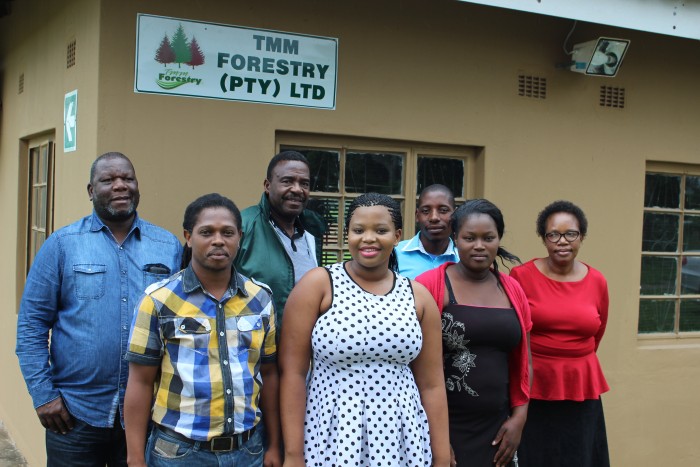 TMM has started operations in the temporary unplanted areas in terms of an MOU with DAFF, pending the signing of a formal Community Forestry Agreement. This is expected to be finalised this year. In terms of this agreement, DAFF will hand over the lease of the land to the TMM Trust. Daff currently leases it from the Ingonyama Trust.

According to TMM’s community liaison manager, Themba Zikhala, there are around 30 000 households (160 000 people) living under the Tembe, Mbila and Mabaso traditional councils who stand to benefit from the forestry project. The members of the three communities will be first in line to benefit from the jobs and business opportunities generated by the project.

Any profits arising from the forestry project would be allocated to the Tembe, Mbila and Mabaso traditional councils who would use them to fund development projects for each community according to their needs. 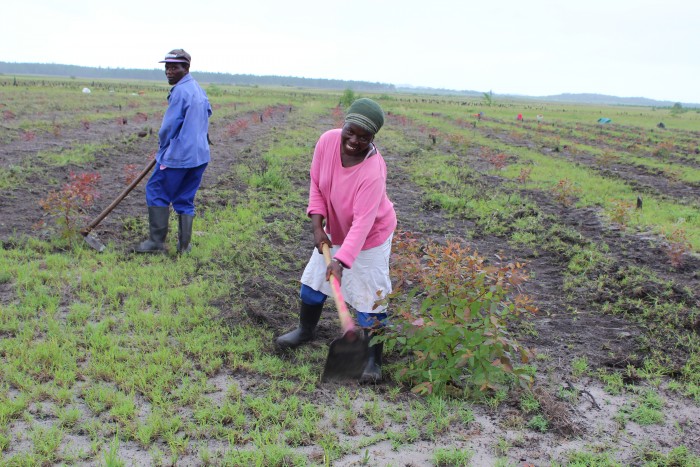 Russel Tembe, chairperson of the Trust, said that forestry was the only economic activity in the region that had proven to be an effective means of generating income and jobs for the local people. Forestry is not new to this area with some 9 000 ha of eucalyptus owned by small-scale growers, many of whom have been assisted by Sappi’s Project Grow or privately established plantations. Most of these small plantations are in their third rotation.

The contracting companies doing the forestry operations for TMM, as well as a growing out nursery at Mbazwana, are owned by community members. There are plans to establish more co-ops or community-owned businesses to grow ground nuts and other crops in between the young trees, to establish honey businesses and pole treatment plants etc, but it is still early days.

The task facing the forestry teams is massive as the plantations have been neglected for years and have been ravaged by fires, uncontrolled coppicing, cattle and pests. All the forestry work is being done manually to maximize job creation, which is one of the key objectives of the Jobs Fund. 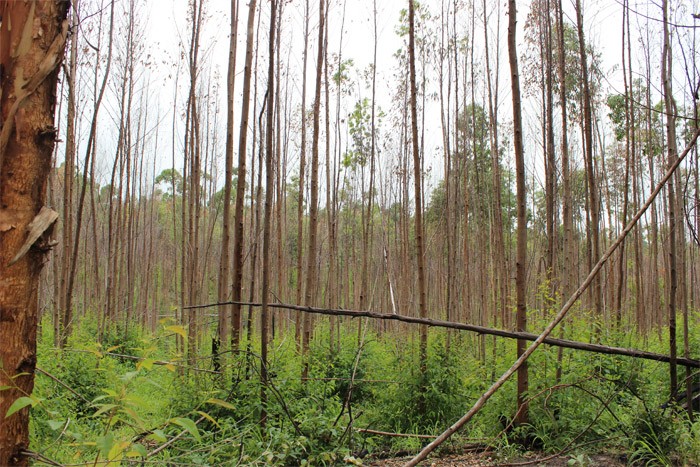 This is a typically neglected compartment at Mbazwana that the TMM team will clear and replant.

TMM is replanting mainly with G x U clones, replacing E. grandis which has been hit hard by Leptocybe invasa. There is existing pine but there are no plans to plant more pine at this stage as the DAFF sawmill that used to saw up the pine logs sourced from the plantations has been standing idle for years.

The TMM team is also planting some Corymbia henryi which has shown potential in these conditions. Dr Colin Smith has been contracted to established species trials to see what will grow well in local conditions.

According to Rory Mack of Awethu Forestry Investments, who is a technical advisor to TMM for the project, they are looking at producing a spread of products including poles, pulpwood and sawlogs. 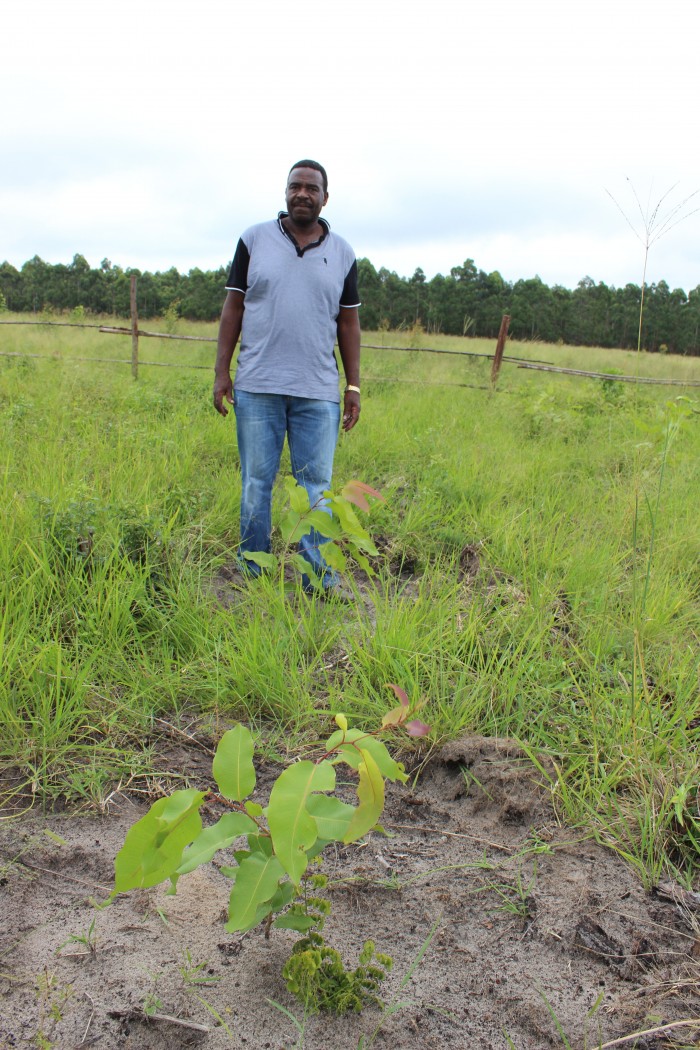 Pius inspects some C. henryi planted in the species trial at Manzengwenya. This species has good pulping properties and has shown some resistance to Leptocybe invasa. 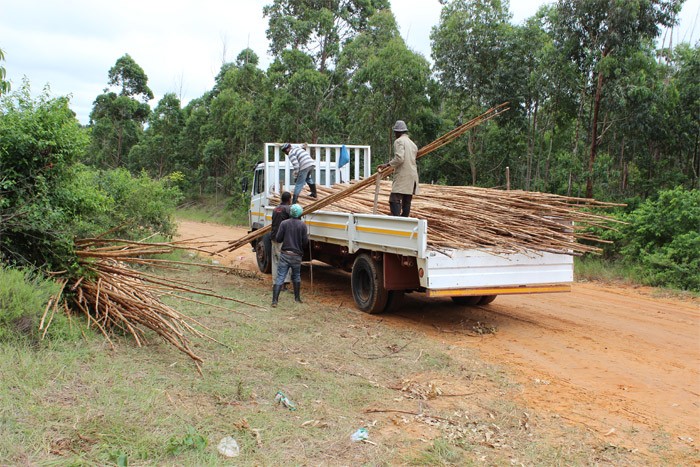 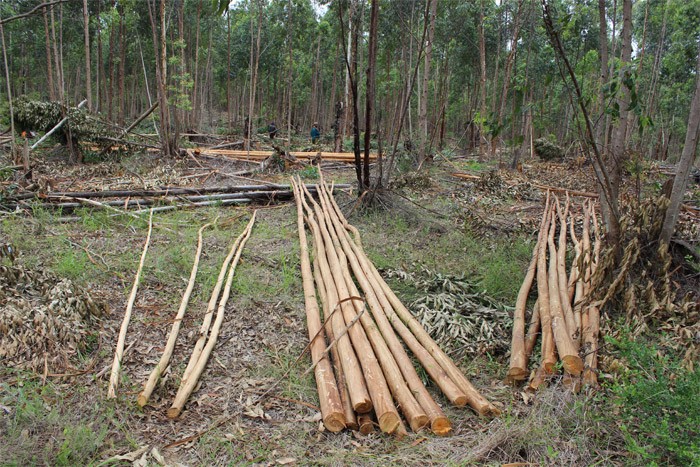 Sappi has an offtake agreement with DAFF for pulpwood from the existing plantation until 2018. This obligation will transfer to the Trust once the community forestry agreement has been signed.

Awethu Forestry is currently harvesting poles, droppers and laths from compartments that are being cleared for planting. Awethu is a partnership between Rory and local businessmen that has been supporting independent growers through marketing linkages for several years.

TMM has partnered with Sunshine Seedlings who provide seedlings and clones for the project as well as training and mentorship. Seedlings are also sourced from Mondi and Enseleni nurseries.

Mortality rates during the first plantings last year were unacceptably high due to extremely dry winter conditions, according to TMM’s forestry manager Pius Tembe. However he said they’ve learnt from those mistakes and continue to water the newly planted seedlings for two to three months until they are established. Survival rates have improved and now match industry standards. 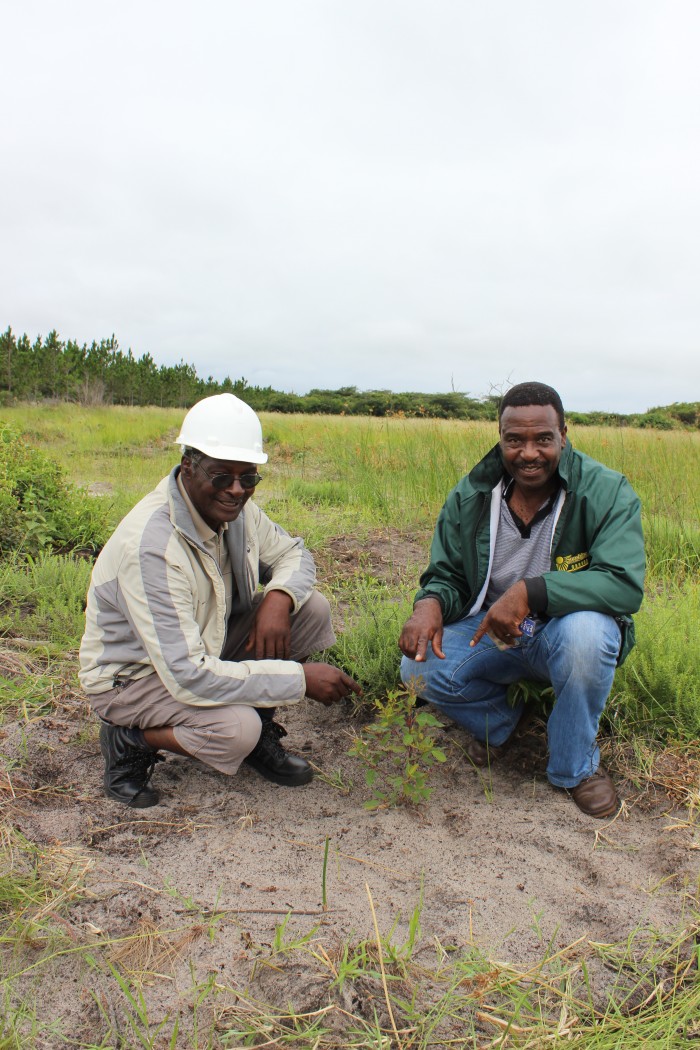 Pius Tembe and contractor Robert Gwala of Gidela Forestry Services who employs 130 people to do silviculture work at Mbazwana.

Themba Zikhali said that one of the key challenges for TMM is to ensure that jobs and business opportunities are spread fairly between the three communities.

Themba said that the TMM team meets with the tribal councils regularly to report back and maintain open communication channels.

“We want to empower communities through establishing a number of projects to create more jobs for those people not employed in the forestry operations,” said Themba. “For example growing crops, the nursery businesses, honey production and a cattle project.”

The forestry operation faces the usual challenges – fire, uncontrolled grazing of cattle, pests and diseases and timber theft. Fire breaks are either non-existent or inadequate as a result of the years of neglect. TMM has joined the Zululand FPA and are liaising with Working on Fire to get them to run workshops through the tribal councils. 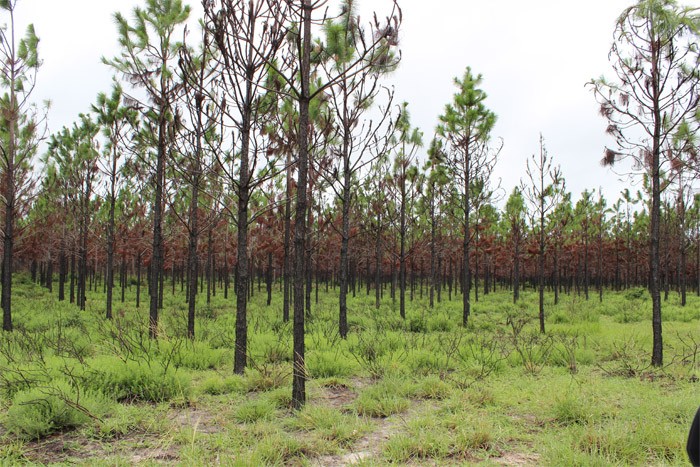 A familiar sight at Mbazwana … a young pine compartment damaged by uncontrolled fire.

Community cattle entering newly planted compartments is a sore point. Themba said the cattle were allowed into the plantations by DAFF and so it’s difficult to keep them out. However they are liaising with the local cattle farmers to thrash out an agreement. He said timber theft has been rife in the past but the situation is improving now. 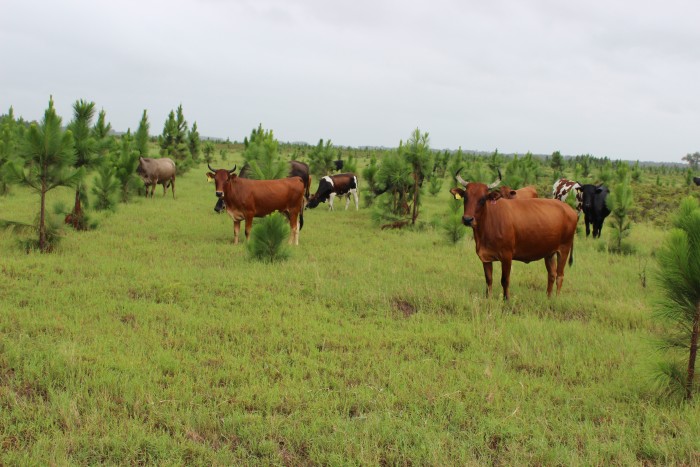 Uncontrolled grazing of community cattle is a challenge for foresters at Manzengwenya and Mbazwana plantations, as it is everywhere.

He explained that the challenge for him is to encourage a change of mind-set among the community members as they are now beneficiaries of the forestry operations, which are already having a positive impact on the local economy.

The big challenge for the TMM Trust is to secure additional funding to keep the project going forward after the initial three-year funding period comes to an end in 2016. The trees being planted now will only be ready to harvest in seven or eight years time.

Chris Chapman, SA Forestry Editor reports … The World Forestry Congress is all set to kick off at Durban’s International

Mechanisation changing the face of forestry

Confidence in the future of forestry

Northern Natal Seedlings is a family-owned business supplying forestry and vegetable seedlings to farmers and market gardeners across the country.