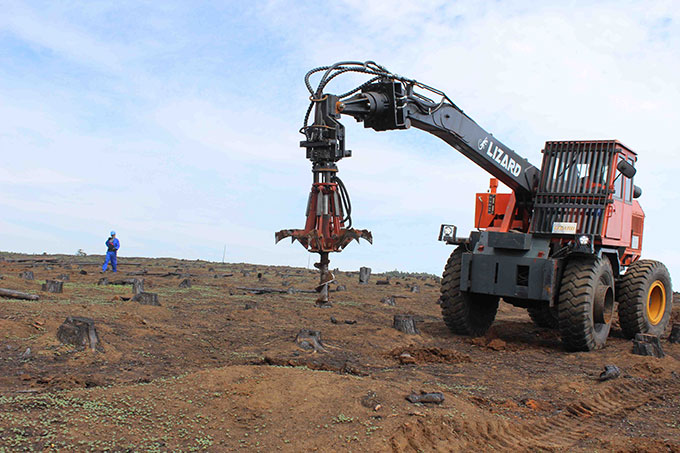 The Lizard, the all-terrain, multi-purpose utility machine designed and developed by China’s Engineering in Greytown, has recently completed informal pitting trials under the watchful eye of forester Lathaniel Reynolds at Sappi’s Seven Oaks plantation in the KZN Midlands.

The versatile Lizard has benefitted from some key modifications following feedback from farmers and foresters who have been testing the machine since its launch at the beginning of 2017.

Key among these was lowering the boom mounting alongside the cab, which significantly lowered the centre of gravity and improved stability of the machine. This modification now also makes the Lizard a more versatile loader. It can load a regular timber truck, or even load timber into charcoal kilns with low roof access. The grab attachment swivels through 180 degrees to facilitate loading inside the kiln.

The Sappi trial involved pitting in a eucalyptus compartment with a moderate slope. The pitting head features a unique design that drills a hole and then breaks the edges of the pit to allow the roots to grow rapidly out.

China Govender, designer of the Lizard and the pitting head, said that his research showed that regular mechanical pitting heads leave a hole with glazed edges that young roots battle to break through, thus holding back early growth. 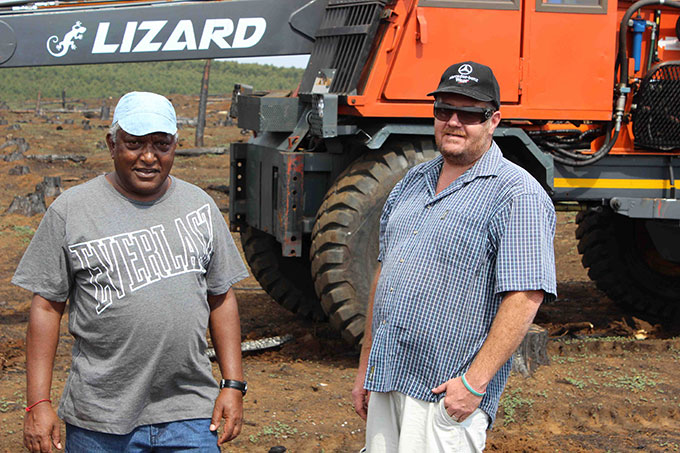 Andie Immelman of Sappi was happy with the pit quality, although he said its effectiveness would have to be verified by monitoring early growth of the seedlings that were planted in the pits.

Andie told SA Forestry that Sappi has been trialing a number of different mechanical and semi-mechanical pitting systems, and had also done loading trials with the Lizard.

The Lizard makes one pit at a time before moving on to the next pit, clocking 19.2 seconds per pit at 2m x 3m espacement. This translates to 186 pits per hour.

China recorded fuel burn of 4.7 litres diesel per hour during the trial.

“We need to remember that this is not an official trial, and that the operator was still not 100% proficient on the machine.  Due to a single pit per move the overall cost per pit will be high.  Further investigations will be required.  Pit quality looks good,” said Andie. 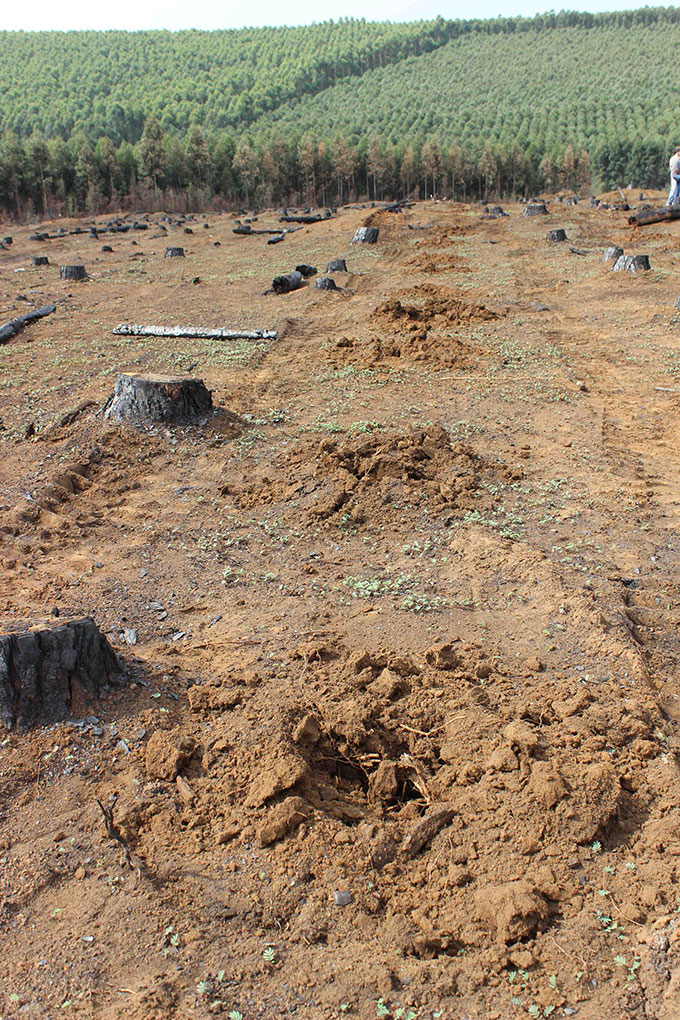 A row of pits made by the Lizard at Seven Oaks, KZN.

The Lizard machine on trial at Sappi has been upgraded from the first prototype. The main change is that China has dropped the boom to give the machine a lower centre of gravity. It has good ground clearance, is very maneuverable and can work up to 45 degree slope.

Versatility is a key feature of the Lizard, which can perform many tasks by just changing the attachment – a quick and easy operation.

Pitting, loading skidding (it is fitted with a winch), front end loader … it can clear waterways, firebreaks and roads.

A GPS can be fitted to the pitting head for accurate pitting.

The pitting attachment used at the Sappi trial was developed by China. It’s a unique design that drills a pit deep enough, and breaks the sides of the pit so that the roots can quickly and easily grow out of the pit. There is no glazing of the hole, as many other pitting heads do.