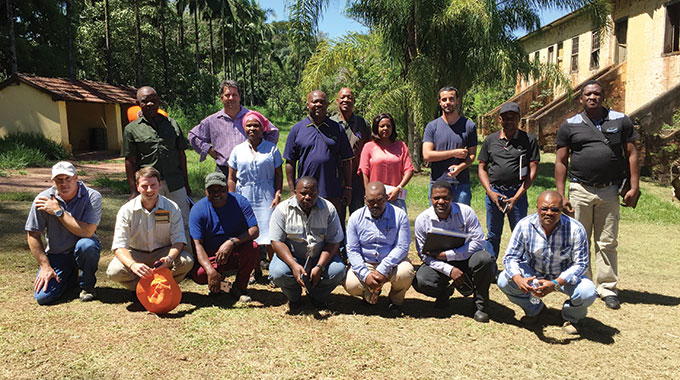 A group of Mondi contractors and Mondi foresters visited Brazil last year to get a close look at how they do their silviculture and harvesting. Mondi has benchmarked its modernized operations on leading Brazilian forestry operations.

Last year Themba Vilane took over the reins of Mondi’s forestry operations in South Africa from Viv McMenamin, who has been appointed CEO of Mondi SA.

Mondi Forests carries a massive responsibility to supply Mondi’s South African pulp and paper mills with fibre sourced from their own plantations, leased plantations as well as timber sourced from small scale growers and timber exchanges.

This is a challenging task given the pressures that impact on the forestry sector in South Africa. These include increasing risks to plantations from pests, diseases and wildfires (exacerbated by climate change), political uncertainties around land reform, a complex regulatory environment and rising costs, to name but a few.

Themba has loads of experience in forestry and business and an excellent management team to help him meet these challenges. He reports directly to Viv, and the two of them will no doubt be pushing the envelope to ensure that Mondi’s Forest division continues to be a pioneer in modernising operations and improving efficiencies. 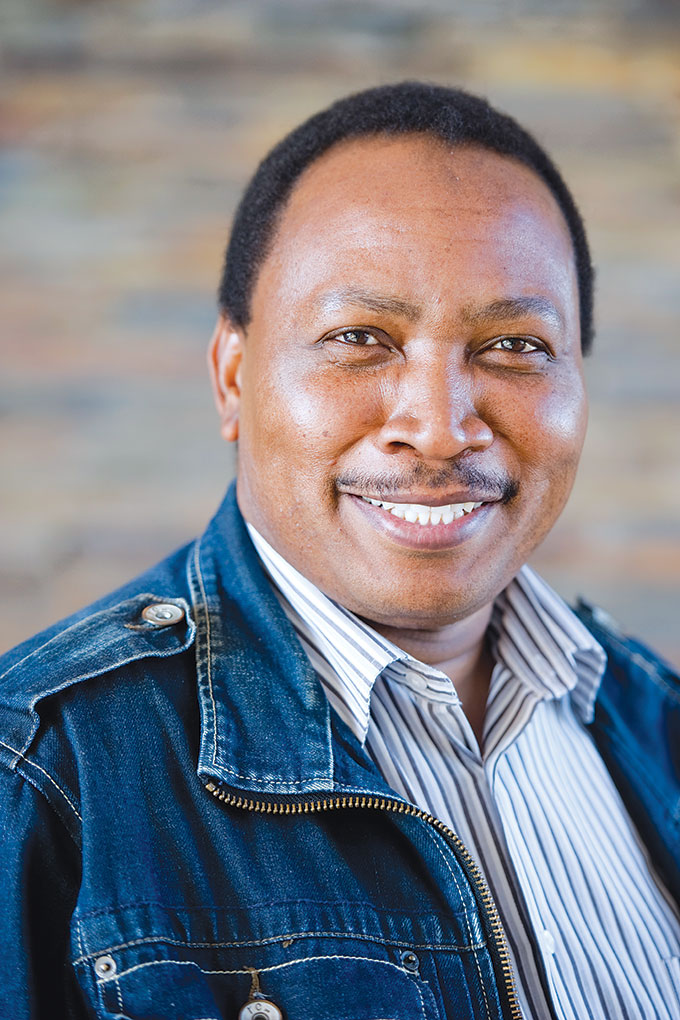 Modernisation
“Modernisation was a catalyst for change in Mondi. It came at a time when we needed something to mitigate our cost pressure,” explained Themba.

Themba said that the first phase is pretty much complete. This involved the introduction of machines/technology to do the hard, physical jobs in forestry operations that were previously done manually.

Silviculture operations have also been transformed, utilizing mechanical pitters, planters and sprayers, as well as augurs and planting tubes, which eliminate the need for workers to carry heavy loads and stoop and bend.

Phases two and three are on-going programmes. “We’re closing the gap every year. Our journey is certainly not complete, but we are ahead of the pack and there are still a lot more opportunities for us,” commented Themba. 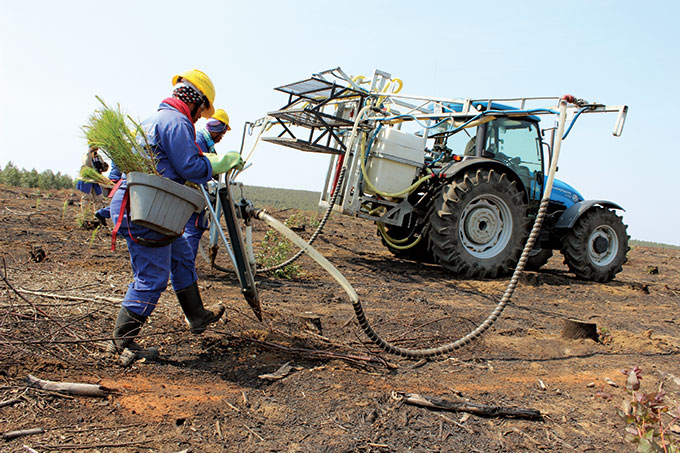 Ikhasi forestry contractors utilize a multi-planter on a community owned plantation near Greytown. The land was purchased from Mondi in a land claim settlement and leased back to Mondi, who manage the forestry business. Ikhasi is owned by the Siyathokoza Community Trust, which now owns the land.

Health and safety
One of the key motivations behind Mondi’s modernization programme was to improve health and safety of forestry field workers, by eliminating the need to carry heavy loads, and to stoop and bend. Mondi field staff now work standing upright – even on steep areas. All equipment used in forestry operations has been selected and designed to enhance productivity as well as improve ergonomics and safety.

Productivity improvements as a result of modernization have been significant.

“We’ve seen major improvements in productivity – up by 50% in silviculture,” said Themba.

Contractor development
One of the challenges of modernising operations is that the primary implementing agents are the forestry contractors. Thus the Mondi team has had to work very closely with their contractors through this process which has transformed the way they operate.

“The contractors were apprehensive when we started. They have become much more capital intensive businesses, they have employed people with new skills sets, like mechanics for instance,” said Themba. “Some of them joined forces to benefit from economies of scale – it has worked well.

“In terms of BBBEE our contractors are required to be at Level 4, but quite a few are now at level 2 or 3. Ownership has broadened, they’ve set up employee trusts. There’s been quite a lot of innovation in this space.”

Themba said that contractors have been empowered through this process and their businesses are benefitting.

Mondi Zimele
Mondi Zimele is another important component in Mondi’s strategy for the Forests division.

The motivation for setting up Mondi Zimele was to create and support sustainable jobs in the areas where Mondi operates. To do this at scale, Mondi Zimele partnered with the DTI to establish the Jobs Fund. Mondi contributed R100 million into the Fund and Mondi’s partners matched that.

Themba says that Mondi Zimele has succeeded in creating double the number of jobs that were lost during the Modernisation process.

“The Mondi Zimele programme complements the Mondi Forest operations. In those rural areas the biggest issue is high unemployment linked to a lack of job opportunities. Our business model under Mondi Zimele looks at setting up small businesses in our footprint areas. It largely focuses on funding, business development support and assisting entrepreneurs to access markets.

“The businesses that we support have a combined turnover greater than R480 million per annum. Our programme assists 2 170 small growers who are delivering about 100 000 tonnes of timber to Mondi mills per annum. In addition to that we also assist approximately 24 of our own contractors.” 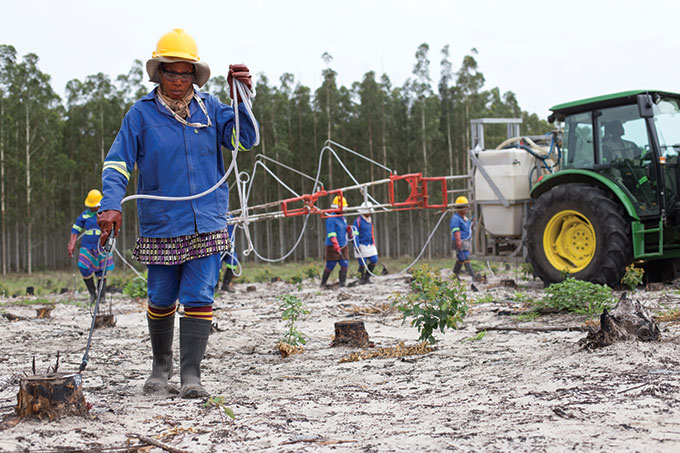 Njojo Construction workers spraying herbicide in a Mondi compartment in Zululand using a modern boom sprayer. The herbicide is transported on the tractor and fed through to the spray lances through a plastic tube, so the worker is not required to carry a heavy load. Njojo is a silviculture contractor that is also supported by Mondi Zimele. (Photo: Samora Chapman)

At the end of the day Mondi is operating in a highly competitive global pulp and paper market, and the key raw material utilized by the mills is fibre. Hence Mondi’s Forest division is also competing head to head with the big producers like Brazil.

“Mondi Forest strives to be a world class forest organization. The pressure of continuous double digit inflation is very worrying. Therefore we will continue to innovate and improve our efficiencies to counter that pressure and strive to be in the bottom quartile in terms of costs,” said Themba.

To do this requires astute leadership, effective management and a continuous pipeline of talented people feeding into an organisation. It’s no surprise then that Mondi places a lot of emphasis on ‘talent management’. Themba himself is a product of that talent management pipeline.

Themba holds a BSc Forestry qualification from Oregon University in the US, a post-grad Management Diploma and an MBA.

Forestry is in his blood, and it was his interest and love for the outdoors and nature that prompted him to choose a forestry career in the first place. He has held many different positions including Forester, Area Manager, Business Unit Manager, before taking over as Managing Director of Mondi Forests in 2017.

“In South Africa today, what will set your organization apart is the right talent, otherwise you can’t unlock the value and the full potential of your assets and your business,” concluded Themba. 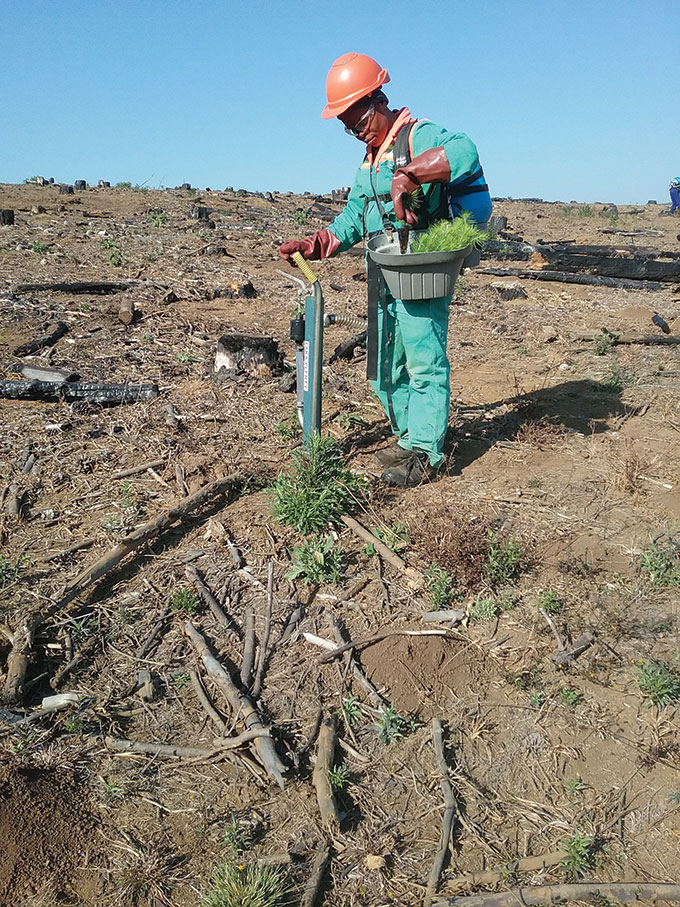 A worker from Idube Forestry Contractors uses a planting tube to place seedlings in a pre-prepared pit in a Mondi plantation in Richmond. Idube has transformed their forestry operations in line with Mondi’s modernization programme, and grown their business and advanced their BBBEE credentials, with business development support from Mondi Zimele.

The story of Mhlekazi Forestry, which has secured a five-year contract to do silviculture and fire fighting work for Sappi