Home » The many uses of Pterocarpus angolensis aka ‘Kiaat’

The many uses of Pterocarpus angolensis aka ‘Kiaat’

Introduction
What strategy would you follow if you are a tree growing in tall dense grass with seasonal droughts and ravaging fires? Furthermore, you have to deal with animals that like your bark and the nutrients you have stored in your roots. There are many tree species in the deciduous woodlands of southern Africa that have tried to overcome such threats. We have to understand the survival strategy of each species to know how to manage it sustainably.

Kiaat, Dolfhout, African teak, Bloodwood, Umbila, Mukwa and Mulombe are just some of the many common names of Pterocarpus angolensis, one of the prime timber species of the woodlands of southern Africa. The names reflect its wide distribution and the many different cultures of people who use this tree in many different ways. Structural and furniture timber are only some of the uses. Foresters may wonder why it is not more widely planted.

Distribution and woodland types
Pterocarpus is a tropical genus of trees within the subfamily Papilionoideae of the legume family Fabaceae. The scientific name means 'wing fruit', i.e. the unusual shape of the pod within the genus. There are about 35 currently recognised species, of which three African species are well known for their good timber, wood carving and traditional medicine. Muninga or P. erinaceus grows in the Sahelian woodlands in West Africa and is also used as a nitrogen-fixer in nutrient-depleted farmland. Padouk or P. soyauxii grows in the tropical moist forests of the Congo Basin and is also used to make musical instruments for the acoustic quality of its timber. P. angolensis grows in the northeastern parts of South Africa, and in Swaziland, Mozambique, Zimbabwe, Botswana, Namibia, Angola, Zambia, Malawi, southeastern Democratic Republic of Congo and Tanzania, in Miombo and undifferentiated woodlands of the Zambezian Regional Centre of Endemism. It grows over a wide range of sites with a wet season alternating with a dry season, and generally well-drained substrates.

Characteristics and reproduction
The mature tree has a beautiful umbrella-shaped spreading crown on a short to long cylindrical stem, covered with dark-brown rough bark. This bark oozes a reddish-brown sap when damaged and this seals the wound; this is the origin of the name bloodwood. The light-green compound leaves are deciduous; the tree is one of the last of the woodland species to get new leaves during the start of the rainy season and the first to drop its leaves during the start of the dry season. It is common to see the leafless trees in the woodlands. The yellow flowers generally appear before the leaves, and develop into the characteristic pods with bristles surrounded by a wing. The wing enables the fruit to drift in the wind for short distances away from the parent tree. Some people think the bristles help to anchor the fruit into the sandy soil surface, and burn during a hot fire. That enables the seed to germinate. The seed germinates relatively easily and well, but in nature, we often do not see many seedlings developing, or maybe we do not know what the seedlings look like.

Establishment and growth
The seedling does not like competition from grass and benefits from regular burning of dense tall grass to become established. It has developed a strategy to deal with such regular fires. During the first few years, the plant (seedling) develops a swollen root and makes only temporary small shoots that die back every year during the dry season. Once the plant has adequate reserves in the swollen root, it makes a strong enough shoot with a relatively thick bark (sapling). This characteristic is genetically fixed in the plant; even under very favourable conditions in a garden with no drought or fire, the shoots will die back for several years before the strong shoot grows up. It has been said that this process may take 10-15 years for a plant to develop a strong, permanent shoot (pole) that eventually grows into a tree. However, the stored reserves make the plant vulnerable to being dug out by elephant and porcupine, and elephant also often damage the bark of the tree to make it vulnerable to damage by grass fires. Once established, the young plants require enough light to establish and grow and therefore need large gaps. Young Kiaat plants are often found near settlements and along the edges of cultivated fields where grass competition is reduced. The tree develops a long, straight stem within a tree stand if the gap is big enough, but in the open, it often develops a spreading crown, with more than half the tree volume in the branches.

Use value
The brown heartwood of Kiaat is resistant to woodborer insects and termites, is durable and has a pleasing spicy fragrance. The attractive light brownish-yellow wood is stable during drying, polishes well and is a sought-after timber for furniture and veneer. In the sandy soils of northern Namibia, trees were cut into planks by pit-sawyers. The planks were then stacked against a tree to dry. The wood is often used for woodcarving, implements and building canoes. The wood produces a rich, resonant sound and is used to make different musical instruments. The tree is valued for several medicinal uses such as to treat ringworm, eye problems, blackwater fever, stabbing pains, malaria, and to increase the supply of breast milk. The bark is stripped for traditional medicine and for binding fibre. Debarked wounds recover well through renewed bark growth on the edge of the wound.

Sustainable resource use
Integrated multiple-use management is the key to sustainable use of Kiaat, and has to go hand in hand with specific management to facilitate establishment and growth of the regeneration into trees with long, straight cylindrical stems. The current practice is for different users to each cut a tree, use the main stem and discard the rest of the wood in the crown portion. However, integrated use of one cut tree and use of all parts of the tree could satisfy the needs of the timber concessionaire for large logs for structural timber and veneer, of the local carpenter for small and larger pieces of wood, the wood carver for smaller pieces of wood with both heartwood and sapwood, and the traditional healer for bark. This would result in fewer trees being cut. At the same time, branchy stems of small kiaat trees could be pruned to ensure the development of straight, branch-free stems up to about 10-12 m. Spot-burns in areas of good kiaat regeneration could reduce the devastating effects of wild fires and at the same time facilitate the height growth of the kiaat poles and small trees.

Resource managers in the woodland areas often say that kiaat has been depleted from their areas because they see no big trees. However, on closer inspection, one sees many kiaat seedlings, saplings and/or poles. It is often a matter of not knowing what these plants look like and how to manage the vegetation to help these kiaat plants to develop into future timber trees. We need to know what we have before we can manage our precious resources effectively. 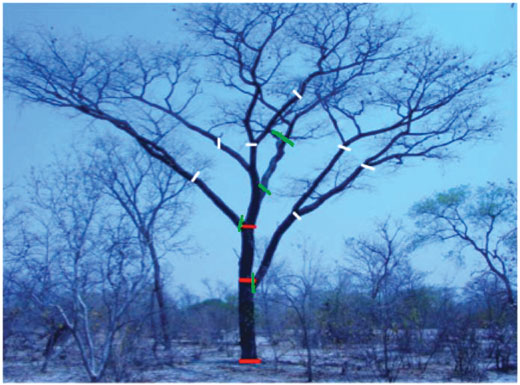 Cutting guide
1st cut: at base of tree; for good coppice regrowth near ground. Red lines indicate logs for veneer or good large-size high-quality furniture timber. Green lines indicate timber for furniture timber of larger surfaces. White lines indicate extra utilisable timber from a tree if suitable mobile saw could be used to cut small logs into pieces for do-it-yourself furniture such as chairs – that should not be cut from the larger logs. Throughout pieces could be used for woodcarving of home utensils and curios for tourism industry. Point of cutting for the furniture industry should be guided by straightness, minimum length and portion of brown wood (not white sapwood) required for a particular product. All bark could be used for traditional medicine and fibre.

‘Land of Smoke and Fire’

Reflections on the Southern Cape and Tsitsikamma wildfire disaster By Theo Stehle ‘Land of smoke and fire’ ... this is

Champion Trees on the agenda

The recently upgraded Tsitsikamma Mountain Trail, which has achieved Green Flag Status, provides hikers with a unique and challenging five-day

Celebrating 125 years in the timber business