R & B Group steps up a level in treated pole business 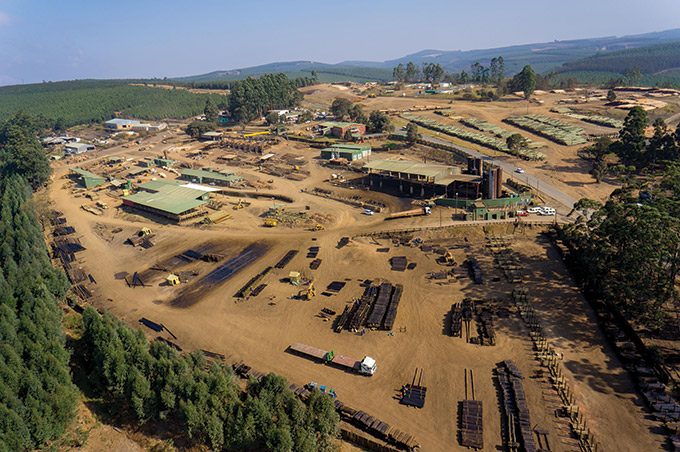 The recent acquisition of the Masonite Plantations by the R & B Group has boosted this family-owned business’ raw material security and created a solid platform for future growth.

It has also secured the jobs of former Masonite plantation staff, secured raw material supply to the Masonite mill, and is a show of confidence in the treated pole market upon which the R & B Group has built its success.

The R & B Group, owned and managed by the Armour family, opened for business in 1952 when Bob Armour established a small treated pole manufacturing plant in Harding. Local farmers supplied the fledgling Harding Treated Timbers (HTT) with all their raw material requirements in those early years.

In 1975 Bob’s son, Roy, took over the management of the business, which continued to go from strength to strength. The Armours started buying timber farms to grow their raw material resources, and bought another pole treating plant in Richmond, Natal Forest Products (NFP), to meet the growing demand for poles. 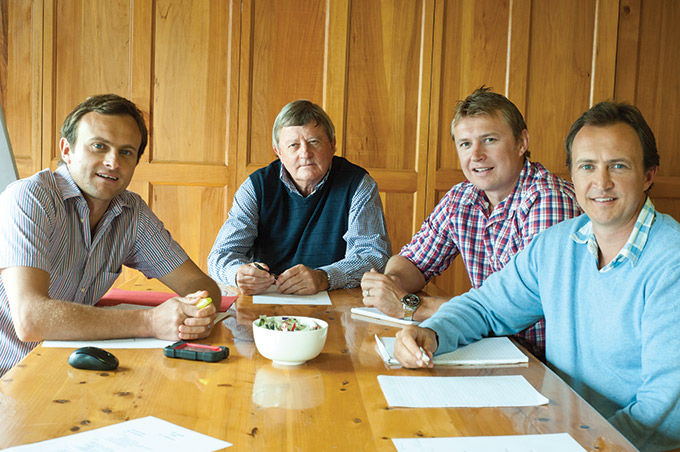 The R & B Group is a family owned and managed business (left to right) Simon, Roy, David and Mark Armour. 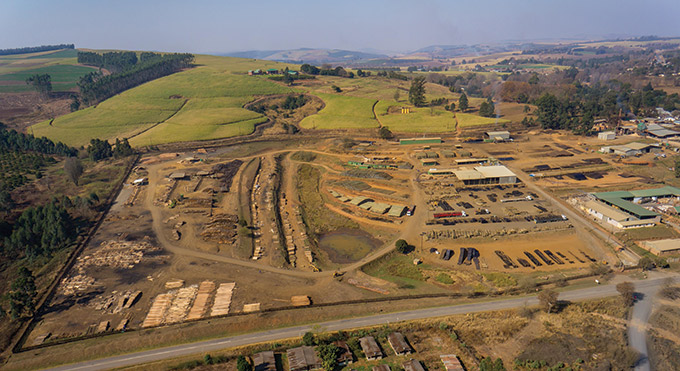 Third generation management
Around 2000 the third generation of Armours, Roy’s sons Mark, Simon and David, took over management of the business, with pole production expanding steadily as the years rolled by. David heads up the marketing function for the Group, Mark is head of forestry and Simon heads up the treating plants and finance functions. Roy is still involved in the business in a non-executive capacity.

Prior to the acquisition of the Masonite plantations earlier this year, pole production capacity was  11 000m3 to 12 000m3 per month from the two plants.

Product categories comprise:
• Building and fencing poles: sold from KZN through the Eastern, Western and Northern Cape and into Namibia.
• Transmission poles: the Group supplies transmission poles to Eskom (with whom they have a supply contract) and to electrical contractors in South Africa; transmission poles are exported throughout Africa and globally.

“Eskom and the African markets are our main targets for transmission poles,” said David. “There is a lot of growth potential in Africa as these countries are still very under-developed.”

One of the keys to the Group’s success in this highly competitive market place, according to David, is their focus on service and quality. They adopted the ‘Hard Pole’ brand in 2011 to “separate ourselves from some of the poor quality poles being supplied to the market”.

The distinctive yellow tag is attached to every pole exiting the gates at both Harding Treated Timbers and Natal Forest Products.

“It provides a guarantee of a quality product and has been well accepted by the market,” said David. 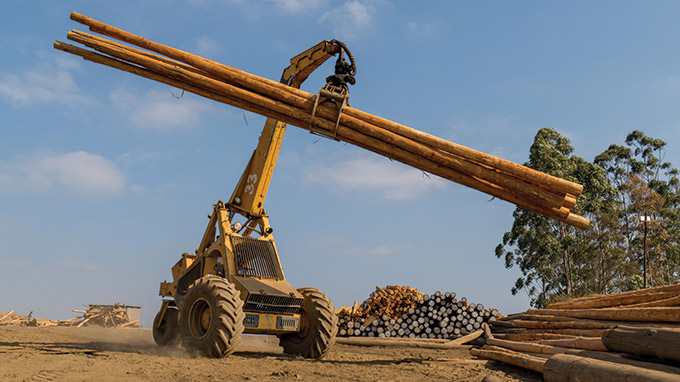 Raw material resources
Prior to the purchase of the Masonite plantations, the raw materials for the two plants were sourced from 1 500 ha of own plantations, 5 000 ha of leased plantations, as well as numerous private farmers and corporate growers including Sappi, Mondi, NCT and Masonite.

However the need to secure raw material resources sufficient to sustain current pole production and meet future growth opportunities prompted the next phase of the Group’s development.

When the Masonite business – including the plantations and the mill - entered business rescue proceedings late last year and was put up for sale, it presented a great opportunity for the R & B Group to secure their timber supply.

“The biggest threat to our business was that we were vulnerable in terms of raw material resources,” said David.

The R & B Group joined forces with BEE company Blackbird Capital and business turnaround specialists Jacobs Capital to bid for the Masonite business. In terms of the bid, the business would be split, with R & B Group acquiring the plantations, while Jacobs and Black Bird would take over the mill business.

There were a number of competing bidders, but the R & B Group and Blackbird Capital/Jacobs Capital bid was accepted by the Masonite shareholders, and the sale was concluded in June this year after approval by the competition commissioner.

“We understood what the Masonite shareholders wanted, and we based our bid around that,” said David. 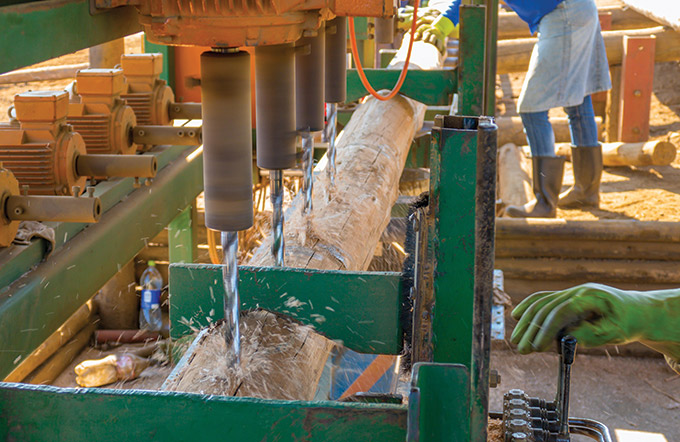 Win-win outcome
The outcome of this transaction was a win-win for all the key stakeholders. Crucially, the staff of both the plantations and the mill have been taken over by the new owners.

Furthermore black entrepreneurs Nkosinathi Nhlangulela and Siyabonga Mncube of Black Bird Capital acquired a 51% stake in the Masonite mill, and are backed up by business turnaround specialists in Jacobs Capital.

From the R & B Group’s point of view, the acquisition of the former Masonite plantations secures their raw material resources and provides a platform for future growth of the business.

Mark Armour, who is in charge of the Group’s forestry operations, has the advantage of being familiar with these plantations – as well as the staff that has been managing them - as he has been sourcing poles from Masonite for many years.

“We took over the full complement of the plantation staff, who come with a lot of experience. It makes it a lot easier for us from a management point of view,” commented Mark.

The R & B team are careful to maintain good relationships with their stakeholders and ‘partners’. A successful turnaround at the mill is important, and Mark welcomed news of the upgrades that the new owners are planning to return the mill business to profitability.

He also acknowledged the importance of maintaining good relationships with the private timber farmers who have been supplying R & B with poles all along, and the Group will continue to rely on them going forward.

“We have achieved the success that we have had thanks to the loyal support from timber farmers and corporates, and we are still relying on them to supply us,” said Mark. “In 2017 we are expanding pole production from current levels to 14 000m3 to 15 000m3 per month, so we will continue to source poles from independent growers.”

“We’re a family business and maintaining good relations with neighbours and partners is important for us,” he said. 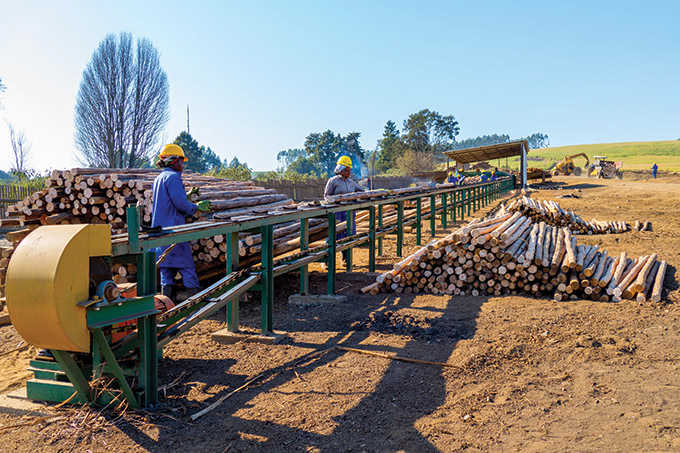 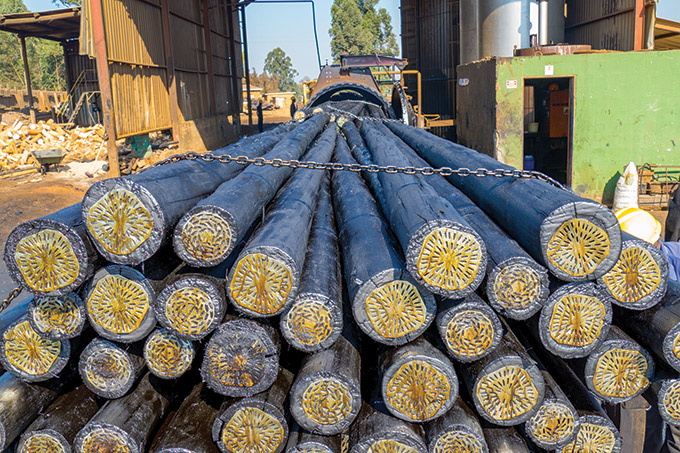 Transmission poles get the creosote treatment at Natal Forest Products.

World Hardwood
A new company, World Hardwood, has been established to run the former Masonite plantations. This business falls under the R & B Group umbrella.

All harvesting is done by motor-manual systems, with trees felled with chainsaws and de-barked manually. According to Mark, there are no mechanical heads available that have proved their suitability for harvesting and de-barking poles.

The R & B team identifies trees earmarked for production of transmission poles prior to the commencement of harvesting operations in a compartment.

Poles are left in-field for four weeks, and are left in the pole yard for another four weeks (building and fencing poles), before they are treated either with Creosote or CCA, according to client requirements. Transmission poles are kiln dried before treating.

Poles destined for export are packed in containers and shipped through the port of Durban. 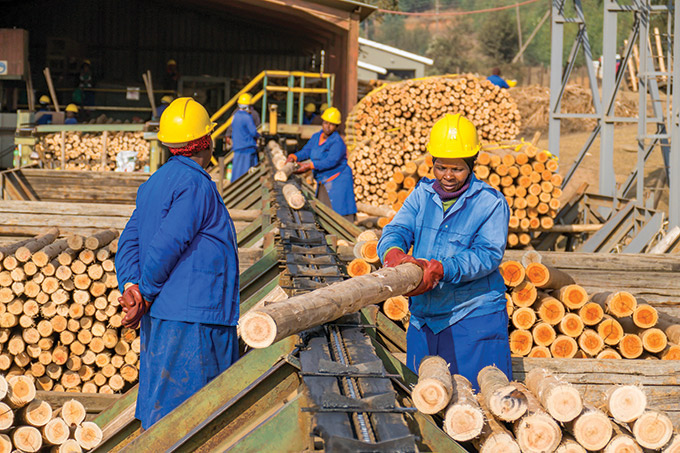 Poles are graded and sorted at Harding Treated Timbers. 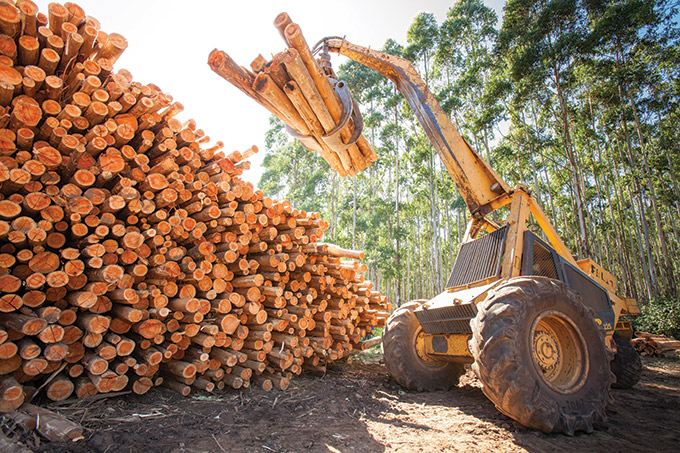