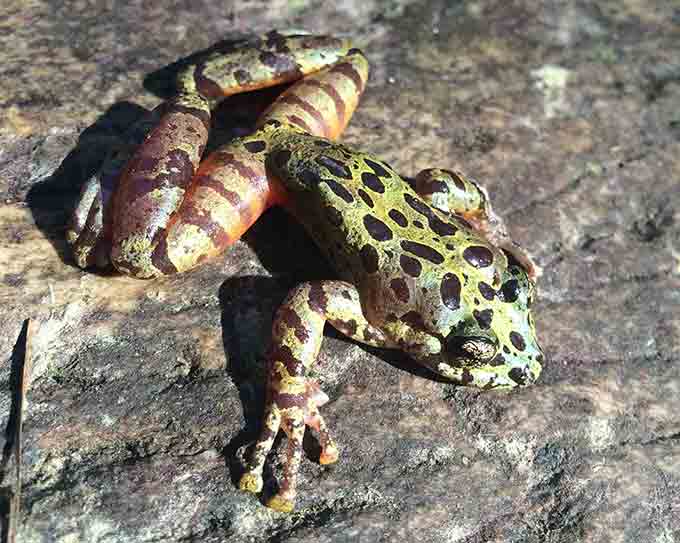 The discovery of a fifth population of the Hewitt's Ghost Frog in South Africa has seen their IUCN Red List of Threatened Species status drop from Critically Endangered to Endangered. But they are far from out of the woods.

Amphibians face the threat of extinction more than most other species of animal or plant, which is even more jarring when one learns how long they have been here. The ghost frog first emerged 160 million years ago - 10 million years before birds took flight.

Forest plantations are established in green belts that favour tree crops, making forestry companies the custodians to South Africa’s natural heritage. This responsibility is front of mind for MTO Forestry, in particular when it comes to the very rare Hewitt's Ghost Frog.

In 1988, distinct colonies of these rare animals were found across South Africa. They are under real danger of disappearing due to the conditions caused by logging. Until 2009, ghost frog colonies were found in just four perennial rivers - the Geelhoutboom, Martins, Klein and Diepkloof - that weave through the Elandsberg Mountains in the Eastern Cape. The more recent discovery of a fifth colony in the Cockscomb Mountains, also in the Eastern Cape, has significantly improved the ghost frog’s chances of survival.

But it is still at serious risk of disappearing, leaving no room for complacency. MTO Forestry has been introducing and improving practices on its plantations to help preserve the Hewitt's Ghost Frog’s habitat.

“MTO remains committed to finding ways to minimise our impact on the environment. We continue to monitor our actions and will as far as possible adapt our practices where able to improve habitats of keystone species,” commented MTO Group CEO Lawrence Polkinghorne.

In 1999 MTO commissioned and funded several studies to establish the health and situation of these ghost frog colonies. Since then it has evolved a set of practices that minimize the impact on the frogs and boost their numbers.

• Prohibiting any new roads to be built near river systems;

• Preparing road surfaces prior to harvesting activities to ensure a minimum amount of silt runoff, which has proven to stagnate breeding;

• Establishing buffer zones around rivers and using only frog-safe chemicals to remove invader plants. Blanket spraying is no longer allowed near rivers;

• Careful coordination and planning of both harvesting and de-weeding to maintain stable environments and avoid erosion situations that gunk up rivers;

• Educating employees and contractors about the frogs and the efforts to secure their environments; and

• Ongoing study and monitoring of the frog colonies.