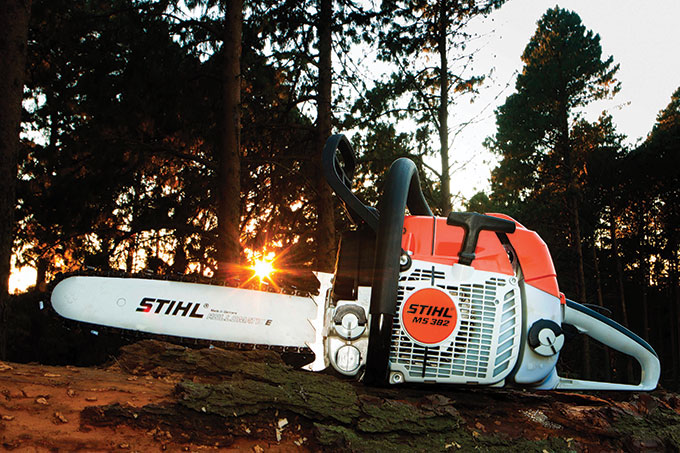 STIHL’s brand new MS 382 chainsaw has arrived. The MS 382, the enhanced version of the legendary MS 381, which until now has been the top selling chainsaw model in South Africa, is now available at STIHL dealerships around the country. The MS 382 follows a long line of popular STIHL chainsaws, which progressed from the O38 to the MS 380 and on to the MS 381.

SUBSCRIBE or renew your subscription to SA Forestry magazine now and you stand a chance to win a brand new, out-the-box STIHL MS 382 chainsaw!

Specially designed for the rigorous demands of professional forestry and agricultural applications, the 3,8kW MS 382 is a worthy successor to the MS 381. This is a robust fuel-powered chainsaw that is ergonomic and lightweight (6.2kg) with an excellent power to weight ratio and various enhanced features.

Controlling STIHL quality
The MS 382 has been developed in line with the exacting STIHL standards that are in place wherever STIHL machines are produced. Regardless of whether a machine is designed for professional or home users, STIHL never compromises on additional features. STIHL is one of the few manufacturers to control the quality of its products by producing the various elements: STIHL makes its own chain and guide bars, carburettors, crankshafts, pistons, cylinders, and outer housings.

There are STIHL plants in Germany, Austria, Switzerland, China, Brazil, Japan and the USA. STIHL in South Africa maintains high stock levels of machines and spares to ensure that consumers are supported by a nationwide network of expert STIHL dealers.

A history interlinked with the chainsaw
STIHL’s history is based on the chainsaw. Company founder, German engineer Andreas Stihl, had a vision of transforming the timber industry of Europe in the 1920s, when saws used in forestry were hand-powered and unwieldy. When he released his prototype of the first engine-driven two-man saw in 1929, it changed the timber industry forever.

The STIHL two-man petrol-powered chainsaw was first introduced to South Africa in the late 1940s. Until this time, STIHL consumers were largely small-scale users, generally farmers.

David Hutton, past General Manager for STIHL South Africa, recalls: “When the timber industry started to take off locally in the 1950s, STIHL was ready for the commercialisation of the sector, introducing a number of popular, tough chainsaws for professional forestry applications: the Contra, the O7S, the O7O and the flagship model, the O8S, which was introduced in the late 1970s-1980s.

The one man harvesting system was introduced to South Africa in the mid-1970s, replacing the massive, heavy two-man saws with the STIHL O38, a revolutionary chainsaw design with an electronic ignition, anti-vibration feature and Quickstop™ chain brake system, designed to reduce the risk of injury in certain kickback situations,” said Dave.

Impressive fuel savings
The MS 382 has a modern 2-mix motor and delivers impressive fuel consumption, up to 20% less than previous models. Jonathan Rencken, Forestry Manager for Tree Fall Harvesters, whose teams have been working with the MS 382 for the past few months, commented: “This is a hassle-free machine that offers better fuel economy – we find we are saving a tank of petrol a day per machine, which is a significant saving.”

His comments are supported by Andre Barnardo, Procurement and Harvesting Manager for Treated Timber Products, who said: “The MS 382 has a lot of power yet is lighter than the MS 381, which makes my team happy. In addition, we are saving almost a litre and a half of fuel per daily set task.”

Enhanced features add quality
The STIHL Ematic™ bar lubrication system adds to the MS 382’s economy, ensuring longer wear and reducing chain oil consumption compared to conventional methods of chain lubrication (up to 50% less depending on the cutting attachment and the type of wood being cut). The enhanced fuel pump has a one-gear drive system and ensures a consistent and steady flow of oil to the saw chain links and guide bar rails.

In line with the STIHL emphasis on constant evolution of its products (without losing the iconic elements of the various popular models), the lightweight MS 382 has been developed to deliver an impressive professional-grade performance without loss of power. It is easier to service, more cost-effective to maintain, and more comfortable to operate (reduced noise, lower emissions and lighter, ergonomic design).

Other MS 382 features that have been re-engineered include an optimised crankshaft and an improved 100% aluminium flywheel with fewer fins that offers better cooling. Because there is less rotating mass, there is reduced wear on the main bearing and the crankshaft, resulting in enhanced reliability. The upgraded starter has a wheel made of polymer instead of aluminium for improved cooling; less dirt enters the cylinder fins, so there is less wear and need for maintenance.

Supported by the nationwide network of STIHL dealer outlets that offer advice, servicing and spares, this new flagship chainsaw continues the legacy of powerful performance and superb after-sales service that has established STIHL as a global  leader.

We bought 2 of the 382 machines through Gentrade Internation (SA). The machines are just superb. I would say with proper handling they are almost trouble free. One question what is the proper saw chain to be used with an 18" guide bar?
Bravo 382!

Where can l get these in Cape Town?

Where can I get the machines around joburg?