Home » Things every forester should know about fire

Things every forester should know about fire 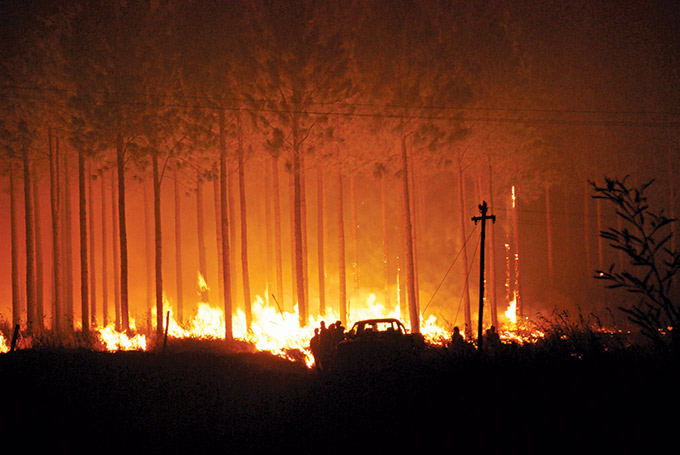 What do we do now? Fire fighters pondering their next move.

The forester‘s words when a fire call wakes him at midnight are unprintable, but there is a vocabulary that accurately describes what we do to prevent or fight fire. If it sounds pedantic, it is. Here is some of it.
By Gilbert Plant
gilbertplant@gmail.com

FIRE BELT: A strip of a practical width up to about three metres, cleared of combustible material by various means to enable controlled burning, or to arrest very small flames, normally around compartments. Grading or sweeping every road in autumn removes leaves and sticks, creating fire belts within the plantations, as well as improving access.

FIRE BREAK: A wide area free of combustible material intended to break the progress of a large fire. Examples are grasslands, paddocks, perennial indigenous forest and cliffs, amongst others. Its width defines it. If man-made, it is ideally angled at 45% to the prevailing wind, where the topography allows.

FUEL VOLUME: is lots of stuff that burns readily. The floor of a wattle plantation, with its mat of fine leaf-drop is very different from the well aerated forest litter of a eucalyptus stand. Wattle planted adjacent to grasslands helps to create a fire barrier.

FUEL DENSITY: relates to heavier stuff that ignites less readily, but burns long and hot once it does.

A TRACER (with an ‘r’ on the end) is a bullet treated with chemicals to make it glow in flight, so you can see where the machine gun is pointing!

A TRACE is the narrow path normally created by chemical means from which strip-burns in grasslands can be controlled. The word comes from the Latin ‘tractus’, old French ‘trace’ (pronounced ‘truss’), middle English ‘trace’, all meaning a ‘path’. It is the easiest of all the fire protection tasks.

Using chemical dessicants to create a ‘trace’, followed by burning when the rest of the grass is too green to ignite, is an efficient, economical, low-stress fire protection technique when carried out at the right time. If the area frosts, be careful not to start too early: the re-grown grass will be dry enough to burn, even though it may still look green. 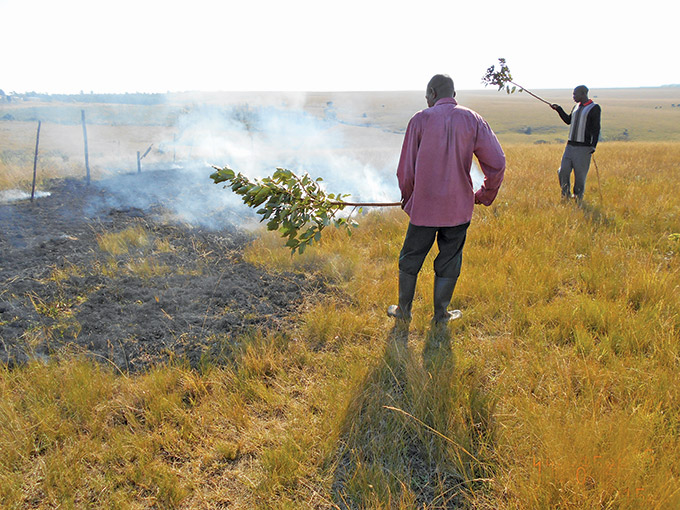 Small-scale growers burning a firebreak in Ozwatini to protect their trees. The trick is to choose the right time to burn – ask your local FPA for advice.

And then there’s the fabled BACK-BURN, potentially the best way of converting a big fire into a really massive one. Unless you know exactly what you are doing, and the terrain, wind direction and fuel type offer a good chance of success, and you have sufficient manpower, equipment – and courage – delete this from your fire-fighting vocabulary. If the back-burn fails, you will long be remembered for the wrong reasons!

The classic back-burn works like this (anything else is not a back-burn): The approaching fire needs oxygen, which it draws in at a certain distance from its front. So if the fire front is moving southwards, it will create a wind moving in the opposite direction (i.e. northwards) as it sucks fresh oxygen into the fire front. IF you are sure that in the event of failure you have a safe escape route, and there’s a road/fire belt from which to light the back-burn, and other negative factors are accounted for, then proceed as follows:
• Position your manpower and resources along the break.
• Position backstops in the area behind the break.
• Light a cigarette (not a Camel; you can’t sit back and relax right now) or toss some dust/soil into the air, to see if the wind is blowing towards the main fire. Feel the wind on your back. If you’re certain that there is a steady pull of air being drawn towards the fire front, put fire along the break as fast as you can, and it will head for the oncoming flames. It‘s important to have enough people lighting the greatest possible length of your back-burn simultaneously; time will always be limited.

Beware of changes along your back-burn. Be ready for burning debris, some of it weighing many kilogrammes, lifted high and thrown behind you by the up-draft when the two fires meet. Stay vigilant.

If you get it right, you’ll remember it forever … and nobody will believe you.

DAMPING DOWN is imperative. If a single match can start a fire, the potential for fires arising from even a small burnt patch needs no explanation.

Soil burns – particularly near stumps, or under logs and brush. If it hisses when sprayed with water, it’s burning. It is generally a different colour.

Test for hot spots with the back of your hand; the guy with the heat-sensing machine won‘t be there till tomorrow.

Tree roots, 30 metres long or more, can burn underground for weeks, even months, so extinguishing the stumps is vital. A violent, sustained wind can ‘vacuum’ fire up from underground humus and roots long after the last visible signs have disappeared.

I once fought a fire that was pulled by a raging southwester from beneath 15-centimetre-high mealies. The farmer had planted them in a wattle patch burnt at the end of winter. It was now November.

Wind rolls smouldering cowpats into adjacent unburnt areas just as you‘re arriving home. Smoke from smouldering material is easier to see if you look into the light. Rake around the ash area after the fire, right down to the soil, from the outside inwards. 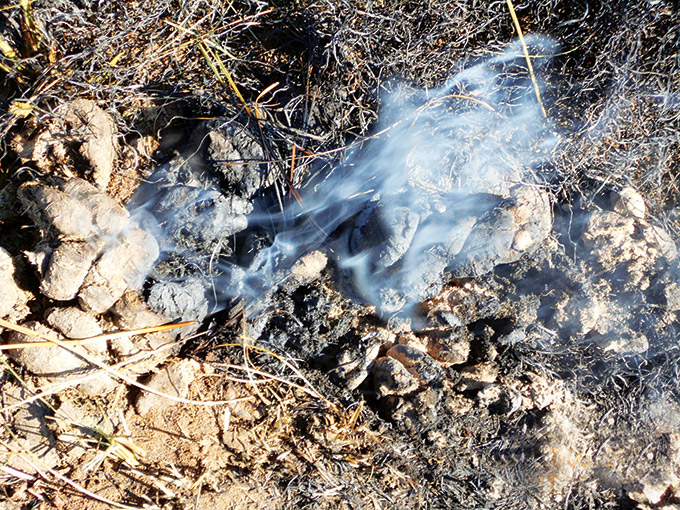 A smouldering cowpat can be blown by the wind and ignite a new fire. Make sure it is properly doused.

Different people hold different fire phobias, but since fire is inevitable in the forestry industry, we learn to live with them. My own phobia is being unprepared: The temperature is in the 30s, the wind nudging the 70s, relative humidity about zero, and the fire call comes through. Nothing beats the feeling of utter helplessness and mind-numbing dread that floods through your body on finding empty fire tenders, tangled fire hoses, missing nozzles, broken knapsacks, jammed lances, empty fuel tanks, inaccessible bakkie sakkies, broken or missing beaters and rakes, vehicles that don’t start, broken starter ropes. And the hammer-blow … the proto team has dispersed to who knows where!

If enough of these factors combine at once, the mind simply disconnects, spinning out of gear. The nervous tick you develop in those few minutes will still be with you years later, as the air conditioner in the office of your new job whispers quietly away.

The golden rule is early preparation and servicing, attention to detail, and regular inspection.

Some fire fighting equipment tips:
• Fit a full-flow ball cock (delicate plumbing term!) to hose nozzles. A fire-fighting hose made of anything other than rubber is an abomination. Synthetic hoses simply melt on contact with flame or coals, and should be banned. The suction hose will not function if it sucks air. Even a pin-sized hole renders it inoperable.
• Cut the top off a two-litre plastic bottle; attach it by a rope to the inside of the lid of the bakkie sakkie for priming the pump.
• In the bakkie, have some rope, a tub of light grease for the knapsack lance, a whole packet of matches in the cubby hole, and at least screwdrivers, waterpump pliers, a hammer and a shifting spanner. A complete starter rope assembly is expensive, but is a lot quicker to fit than wrestling with a faulty starter spring.
• Train everyone to return the kill-switch to the “start” position after cutting the pump motor. Even better, fit a spring-loaded switch.
• Close the fuel tap when parking the bakkie-sakkie. If the needle and seat in the carburettor bowl leaks, the petrol dribbles into the sump, and dilutes the oil. I’ve seen it fill the cylinder, thus locking the motor.
• If it takes longer than two minutes for one man to load this vital item (bakkie-sakkie), it’s taking too long. Store it supported on thick, strong planks or, ideally, a sturdy table that pivots, attached to a chain-block kept under light load so that the weight is on the support. To load it, lift it a few centimetres, move the support away, reverse your bakkie under the tank, lower the bakkie-sakkie, disconnect the chain, strap the tank, and drive off. Refill it before returning it!

Fire is the greatest stress producer in our industry. Preventing and combatting its destructive potential is not rocket science, and can be done on a limited budget. Climate change has begun to affect us, as weather patterns become unpredictable, sometimes extreme, escalating the risks. The old adage that ‘knowledge is power’ applies more than ever. But we are tree farmers after all, and “die boer maak a plan.”

Excellent article! Should become part of NMMU 's Fire Protection manual.
Another practical thing I want to mention is the wrong placing of the house reel on many bakkie sakkies. They are placed parallel with the vehicle instead of 90 degrees with the vehicle. It frustrated me always when I got to a fire because you first have to unroll the pipe backwards on the ground before you can run 90 degrees into the plantation with the pipe. Those valuable seconds lost may be the difference between a small fire and a run away fire. If the reel was placed 90 degrees with the bakkie sakkie, you just start the engine, grap the pipe and run straight to the fire. I've phoned years ago all the manufactures of bakkie sakkies with the reels parallel with the vehicle, and asked them to change it to 90 degrees, but with no success.