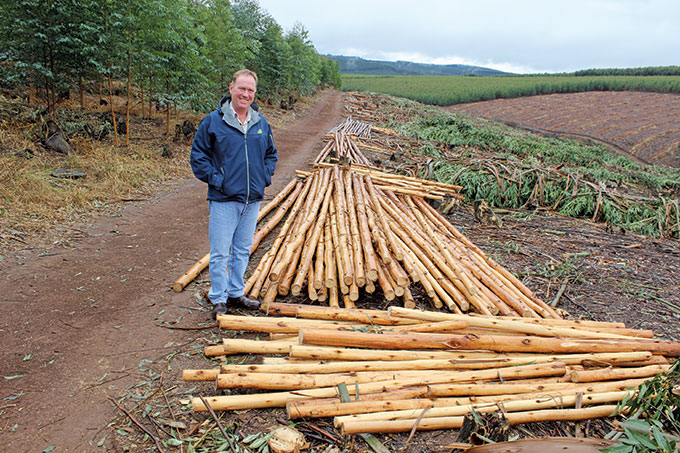 Timber for poles and pulp is sorted into separate piles at harvesting. Jon Mackenzie maximizes productivity on his farm by matching species to site for specific markets.

Farming can be a stressful business, and farmers in SA face many challenges such as adverse weather, pests and diseases, the complexities of managing a lot of people, fluctuating markets, a volatile socio-political environment, regulation and red tape – to name just a few.

But one local farmer who seems to take it all in his stride with a perpetual smile on his face is Jon Mackenzie. He’s a low profile fellow who prefers to fly under the radar, but his slick timber farming operation has not escaped the notice of the NCT team which has declared him their Top Tree Farmer for 2018 in the category commercial farms.

This accolade took Jon completely by surprise – he didn’t see it coming!

Starting small
Jon started small, purchasing Malvern farm in Harding in 2007 with just 180 ha of planted trees. Through careful site species selection (with help from NCT’s technical team), simple, effective silviculture and effective utilization of every bit of land, he has been able to grow a sustainable tree farming business that now includes 865 hectares of Eucalyptus, wattle and pine.

Timber is not the only activity on the farm. Jon has a small herd of cattle, grows vegetables beneath the Eskom powerlines that cross the farm and has started planting avocados on 10 hectares with plans to expand to around 50 hectares over the next four years.

He has also established a small sawmill producing pallets and structural lumber to add value to the pine sawlogs grown on the farm. 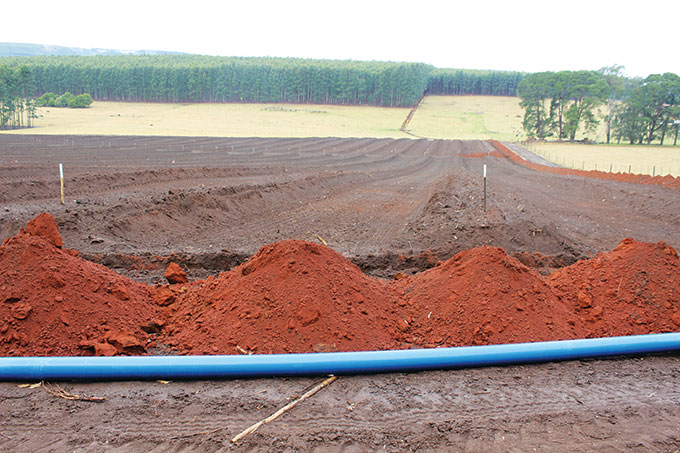 Jon Mackenzie is busy preparing to plant avacados. The blue pipe (foreground) is for irrigation. 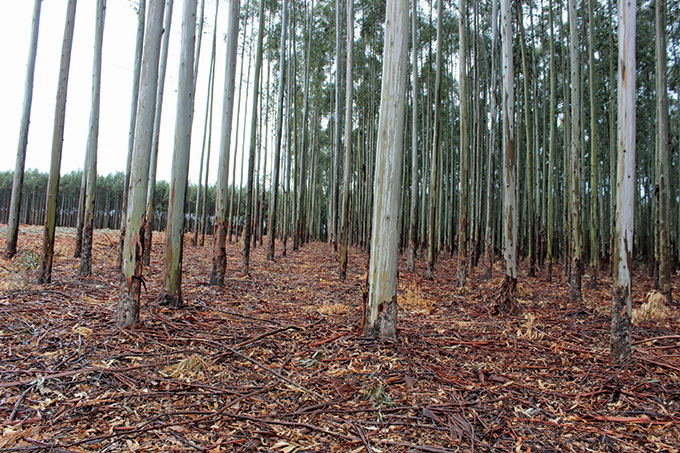 Transmission poles are grown on the best sites on a 10 year rotation.

Producing poles
The timber business is focused primarily on pole production, with the timber unsuitable for poles sold for pulp. Malvern farm is situated within sight of Harding Treated Timbers, so this strategy makes sense.

By the way, Jon also manages the HTT pole manufacturing operation through one of his side-businesses, JMC Forestry Services, so he understands the pole business extremely well.

He says that the demand for poles falls into two main categories: small poles (50mm – 100 mm diameter) and large poles (160 mm to 200 mm). The species selection, silviculture regimes and harvesting system (motor-manual) are all geared to maximize pole production.

E. grandis and G x U hybrids (the hybrids selected for Leptocybe tolerance) are planted on warm temperate sites and G x N varieties on colder sites where frost is a risk. Wattle is grown in strategic belts for fire protection, and pine compartments are managed for saw timber.

On poorer sites, eucs are felled at 5-6 years, producing small diameter poles and pulp. Higher productivity sites are thinned at 5-6 years and the remaining trees are grown for a further 4-5 years to maximize transmission pole production.

“You can’t grow big poles on poor sites, so we have identified the good sites with MAI’s of over 16 for growing transmission poles,” explained Jon. “Our target is to sell 50% of the timber we harvest as poles.”

Because of the focus on pole production, all harvesting is motor-manual. All pitting is done by hand and even loading of small timber is done by hand (Bell loggers are used to load heavy poles only). Jon’s team plants around 80 ha per year. 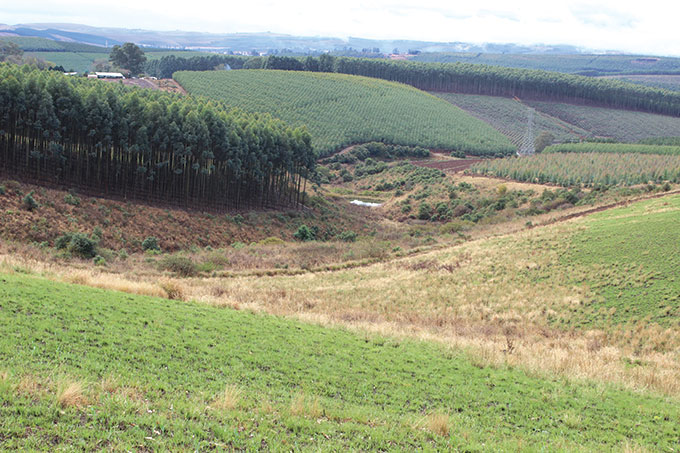 Innovative site preparation
The biggest innovation comes in site preparation. Jon stopped burning post-harvest slash on his farm three years ago as he couldn’t bear the sight of the exposed topsoil washing away in the rain. He acquired a Tomcat chipper, powered by a standard agricultural tractor, and chips all the big tops and branches after harvesting.

The chips and the remaining slash is spread evenly over the ground, protecting the soil from sun, wind and rain and locking in the moisture and the nutrients. The immediate benefits of this operation are that the site is ready for planting and pre-plant weeding is not necessary as the weeds can’t grow through the mulch layer.

The longer term benefits of improved productivity and sustainability of the soil over many rotations may not have been accurately measured, but Jon’s instinct tells him that the benefits of the chipping operation far outweigh the cost. 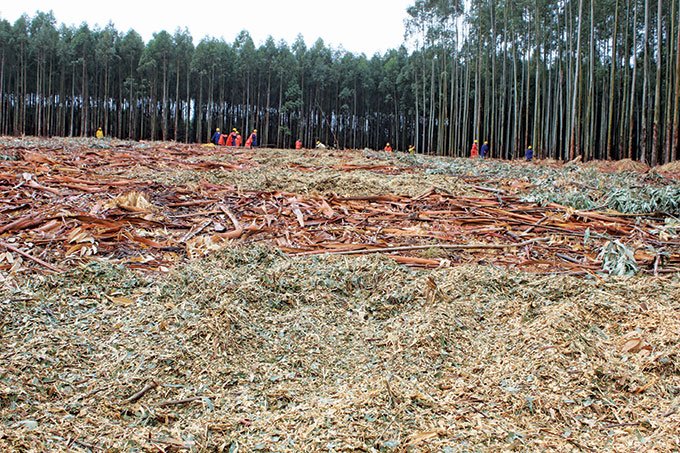 There is no burning of slash on Malvern Farm. The slash is chipped and spread across the compartment, protecting the soil and locking in moisture and nutrients. 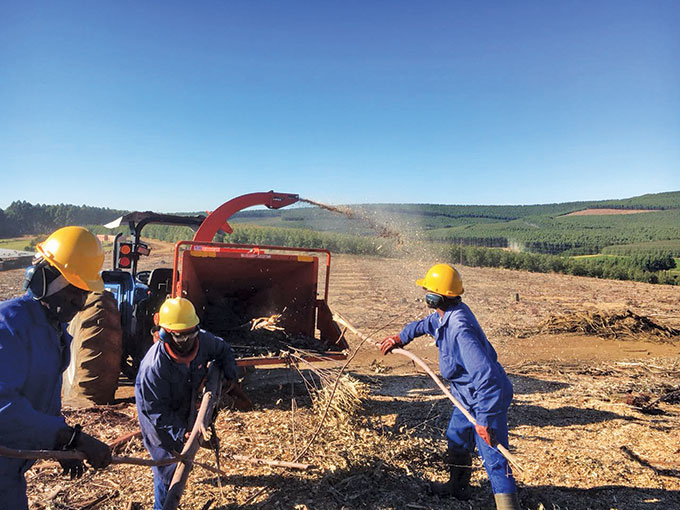 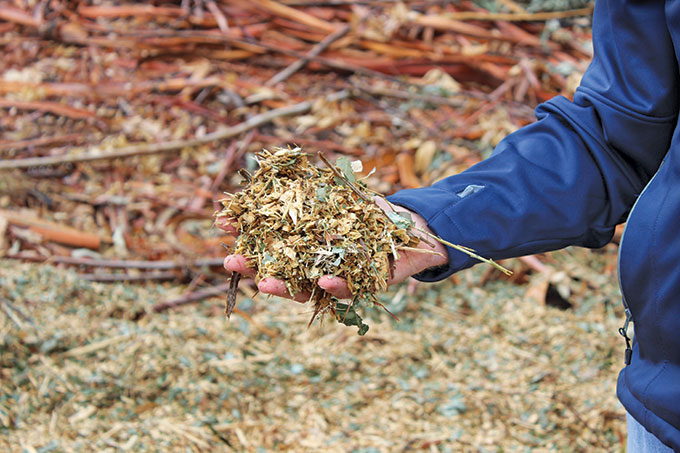 A helping hand
Jon’s approach to labour and community relations is refreshing and innovative, and has contributed in no small measure to his own success and the success of the people around him.

Jon’s first job in forestry was as a manager in a timber harvesting business. He started his own contracting business in 2001. One of his employees, Fumanekile Nciya, who started off as a general labourer, displayed so much potential that he was fast-tracked through the ranks as tractor driver, harvesting supervisor and is now operations director and a 51% shareholder in the business.

“He’s been with me for 17 years – I trust him more than I trust myself,” Jon chuckles! “He is willing, keen, hard working, learns fast and is an excellent manager of people.” 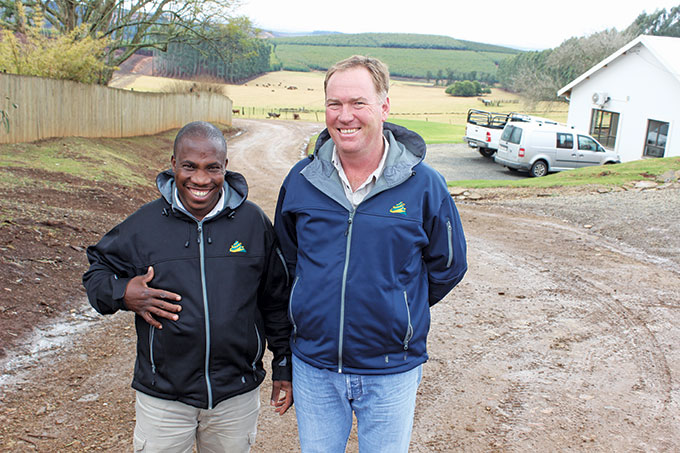 Now Jon and Fumanekile have bought a small timber farm together. Fumanekile has 51% shares in it, and has the option of buying Jon out when it’s up and running and the loans have been paid off. Jon is as excited as his trusty partner over this latest acquisition.

“The future of farming in SA must be to transform,” said Jon with conviction. “We need successful black farmers in SA – the trick is not to go the BEE window-dressing route. We have to get proactive – we have to get involved.”

Although Jon does not have a formal ‘community engagement’ programme, his natural instinct and respect for people has led him down that path.

Employees receive a mixed bag of vegetable seedlings every month over and above their normal wages. They take them home and plant and tend them. The veggies provide healthy food for the families, and perhaps a surplus to sell. The only return that Jon insists upon is that they give back some free fresh vegetables that are donated to charities and needy people in surrounding communities. 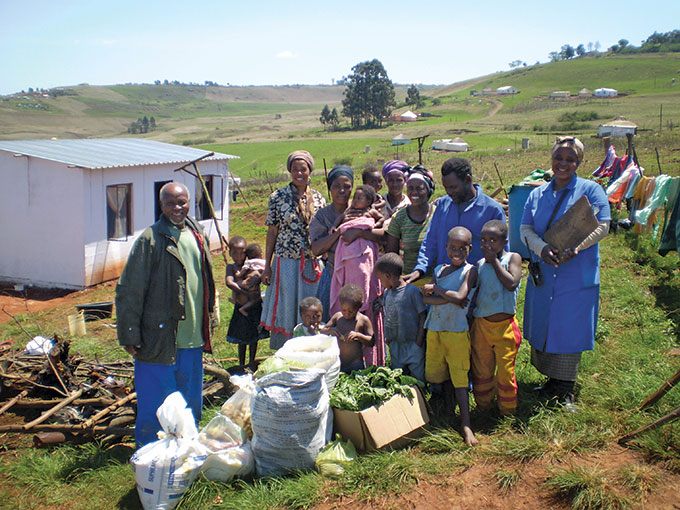 Good will
This is no short term ‘do-good’ exercise. It’s been going on for 15 years. It’s an integral part of Jon’s ethos, he believes that if you give something it comes back in abundance. The good will that has been generated from this outreach is huge, and many needy people, including crèches and old age homes, have come to rely on the vegetable donations.

Recently Jon helped a local woman, Bongiwe Phungula, to fulfill her dream of running a laundromat business by providing an interest-free loan for purchasing equipment and helping to develop a business plan etc. The business opened in Harding a year ago, and according to Jon is “flying”. Bongiwe now employs two people.

It is grabbing these kinds of opportunities that make Jon Mackenzie tick. “It adds a lot of spice to life,” he says with a massive grin.

He’s obviously having fun! His generosity and his ‘can-do’ attitude rubs off on those around him, and the success of his businesses follows suite.

Looking for transmission poles 3000 and fencing poles from 2.4m -6m all untreated