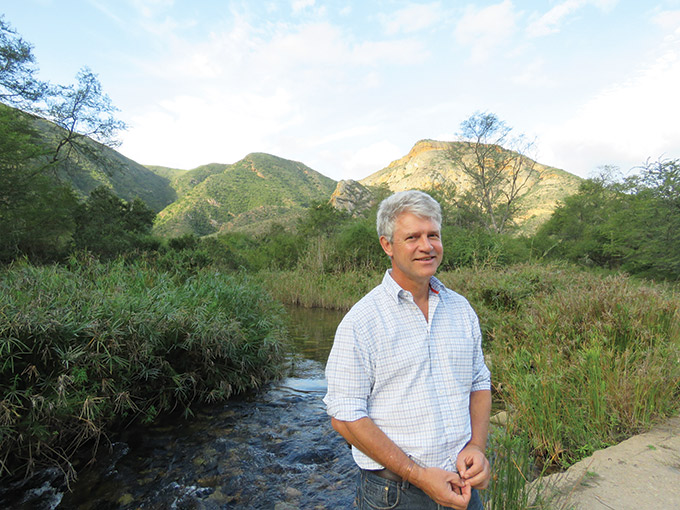 Recently I accompanied Cassie Carstens, Planning Manager of MTO Forestry (Cape), to a site meeting at a Working for Wetlands project to restore a degraded wetland in the Tsitsikamma River near Clarkson, with funding from the Government’s Extended Public Works Programme.  At the site we met with Japie Buckle, a forest scientist who is attached to the Department of Environment Affairs’ Natural Resource Management Chief Directorate and responsible for Operational Support and Planning, and Morné Pienaar, a civil engineer of the consulting firm Aurecon.  The two are guiding the construction works undertaken for the rehabilitation of the wetland.

The wetland is located in a basin formed by the confluence of two major tributaries of the Tsitsikamma River. It is situated on so-called Fingo tribal land, belonging to the Mfengu tribe, being situated close to State forests in the area. Degradation (gully erosion) started many years ago at an old road crossing further downstream. Degradation continued over a long period of time due to over-grazing and trampling by cattle, fire, and infestation by invader vegetation.

This has been the fate of many of South Africa’s wetlands, of which about half of the 2.4% of surface land they cover, is lost or seriously degraded. It is amazing that until as late as 40 years ago the practice of draining wetlands for agriculture was still common and acceptable not only in South Africa, but in many parts of the world. The signing of the Ramsar Wetland Convention in 1975 was a turning point.

Today wetlands are regarded as ecosystems of critical importance, especially for South Africa, a water scarce country threatened by the effects of climate change. In 2012 a biodiversity assessment found wetlands to be the most critically endangered ecosystem in South Africa. There is almost no forest estate without wetlands being incorporated into its matrix of plantations and indigenous vegetation types. Forestry areas are therefore important water conservation areas.

What is a wetland?
In the National Water Act, wetlands are defined as land which is transitional between terrestrial and aquatic systems where the water table is at or near the surface, or the land is periodically covered with shallow water, or would support vegetation typically adapted to life in water saturated soils. In common terms: marshes, swamps, bogs or vleis. These are characterised by a very high accumulation of organic matter over countless years, giving them vital water infiltration and retention capacities.

It has been proven that even seriously degraded wetlands can be restored.

With the above setting the context, let us return to the Project.

We visited the construction site for the wetland restoration works in one of the main tributaries of the river, flanked by a steep rocky hill slope on the one side, and a flood plain comprising a palmiet (Prionium serratum) wetland on the other (see Google Earth image below). Prior to degradation of the wetland, energy of flood water conditions was dissipated as it flowed across a wide, shallow area into the wetland instead of along a narrow channel. Changing wetland dynamics, however, caused a donga to form in the river channel, cutting back upstream (a so-called ‘head-cut’), draining the palmiet wetland by lowering its water table and thereby threatening to undermine its important ecosystem function, and ultimately change its vegetation composition. 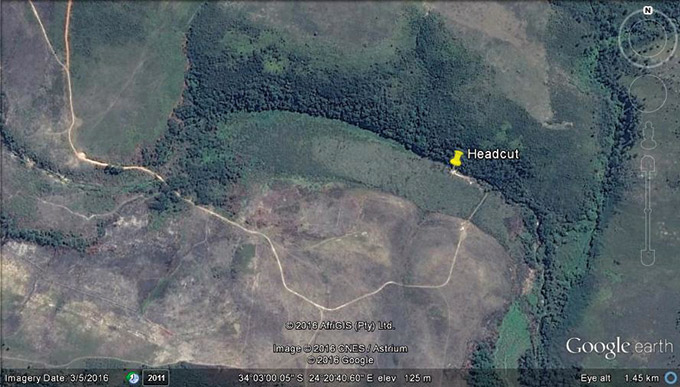 We also had a look at the rehabilitation work done in another part of the basin which has been seriously degraded by overgrazing and trampling and subsequent invasion by mainly black wattle. This work entails eradicating the wattle infestations, follow-up operations, and getting natural vegetation to establish, in some places by actively sowing seed, as well as re-establishing palmiet on the banks of gullies. Unwanted fires and cattle still grazing in these areas present on-going problems.

MTO is the implementing agent and Cassie Carstens the implementing manager for this and related projects in the upper catchment of the river on state forest land. Two contractor teams from the local Mfengu communities of Clarkson, Kareedouw and Guava Juice townships, execute the work. This includes the construction work in the river, eradicating wattle and restoration of the wetlands elsewhere in the basin, overseen by project manager Christo Strydom. These teams receive training in the process.

On site Japie Buckle explained the principles behind this and other restoration projects.

“In the Working for Wetlands (WfWe) programme we follow a holistic catchment approach to wetland rehabilitation. What we often found is that the degradation of wetlands in the lower sections of a catchment is just a symptom of much bigger problems in the upper catchment area. So before you start spending funds on wetland rehabilitation, you should attempt to acquire an understanding of the dynamics of the entire catchment system (consult Google Earth and undertake field verification).

“In this assessment process it is important to establish what the historical drivers are behind the degradation processes in the catchment. Has it been over-grazing, too frequent veld burning, road construction, artificial channelling of the river course with resulting drainage of the flood plain, invasive alien plant invasions in the catchment and riparian zone, or a combination of these?  The root causes should be identified and addressed before spending large sums on structural interventions in the wetland itself.” 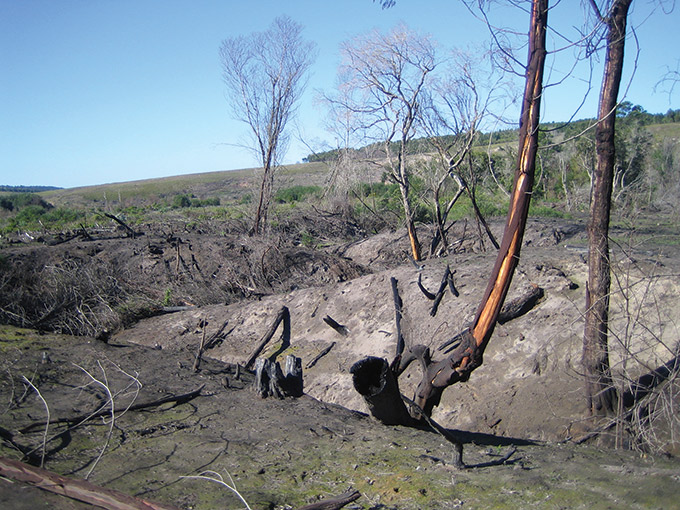 Degraded wetland in the basin after wattle has been partially eradication and a fire swept through the area.

For example: Attempt to eliminate overgrazing by cattle (which can be an on-going problem in communal tribal grazing lands) as a root cause.  This could entail a drawn out process of consultation and negotiation with the community.

Once the drivers have been identified and root causes addressed, the focus can shift to rehabilitating the stressed wetland itself.

Here the rationale is to try and stop the active erosion in the wetland as a first step. This will entail stopping and deactivating the continuing head-cut erosion process at the top end of the active donga / gully that is migrating (always in an upstream direction) into the wetland.

“If you hear a waterfall within a wetland, you will know you have problems. Wetlands occur on very low gradient areas and dongas and waterfalls are sure signs of seriously degraded systems.

“It is vital to stop head-cuts from moving further up the remaining unaffected wetland system. There are various ways of addressing this, but it is always best to contact someone with expertise and experience in dealing with these matters (WfWe technical staff or an agricultural engineer).”

The two most common ways to deactivate head-cut erosion are:
• Re-slope the head-cut (vertical donga / gully banks) into a much larger chute at a gradient of 1:4, and protect the runoff surface area of the chute with some kind of intervention (Hyson cells in high energy systems, or Macmat R or appropriate geo-membrane depending on the volume and energy of the water – this is often the cheaper option); or
• To “flood-out” the head-cut by building a hard structure just downstream, or in the head-cut itself.  Water will now flow over the structure at the original natural water level in the wetland and lift the water table behind the structure resulting in the rehydration of the wetland upstream from the structure.  Rehydration is absolutely essential to restore a wetland.

Once all the head-cuts in a wetland have been deactivated, and the landowner really wants to restore the functioning of the entire system, more interventions will be needed in the donga / gully downstream of the head-cut intervention, lifting the water table in the gully in order to divert the higher level of water into the adjoining wetland areas to rehydrate them. The aim is to eventually completely restore the natural hydrology of the flood plain / wetland.

“We recommend that a concrete cut-off wall be built behind / against the gabion baskets to create an impermeable structure. In high-energy systems problems often occur when water undermines the gabion structures which are built on river floors with sandy sediments. There are ways to deal with this, but the best advice is to talk to us (WfWe) before big money is spent on hard structures – we have 17 years of experience in this field, working alongside engineers, having learnt from mistakes, and there is no need to reinvent the wheel.” 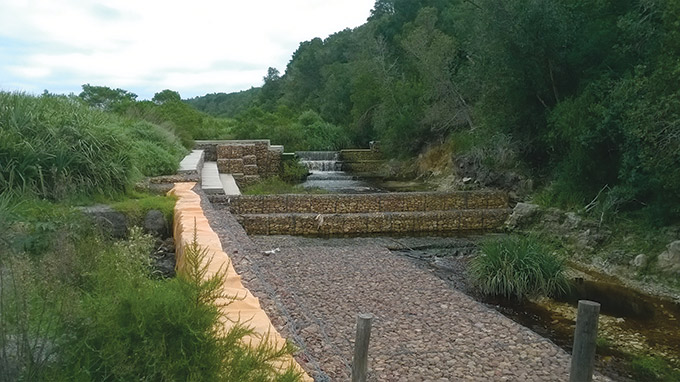 The completed head-cut structure designed to stop the head-cut from moving further upstream, and restore the water level of the wetland.

Japie further advised that whenever forestry companies build roads through wetlands, flood water flow should not be channelled through one culvert, but be distributed through a series of culverts in order to evenly spread the water over the total width of the wetland. This will prevent channel erosion resulting in gullies that eventually lower the water table of the wetland.

Construction of the structures in the gully, which is not easily accessible, is a difficult, labour-intensive task that requires a lot of persistence and endurance. Rock for the filling of gabion baskets has to be laboriously conveyed manually through the wetland to the construction site.  The progress shown in the accompanying photographs was achieved over a couple of years, and the positive results of the lifting of the water table behind the structures just downstream of the head-cut are already evident. Work is currently progressing downstream from the initial structure to continue with the process of elevating the water table by diverting water into the adjacent wetland.